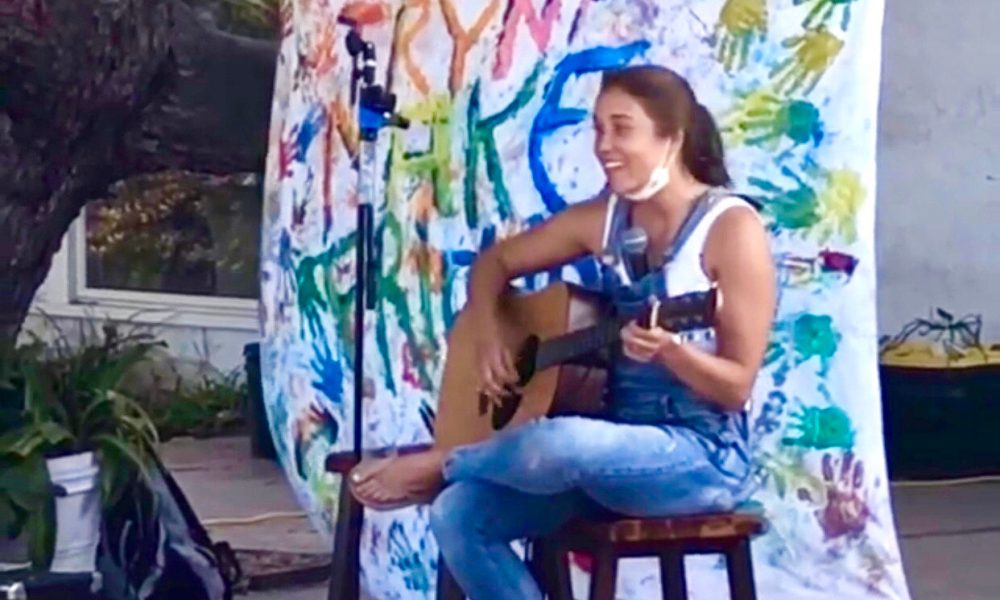 Today we’re excited to introduce you to Julie Roland. Julie is an absolute inspiration.  She is a Naval Aviator, Entertainer, Producer and is also a content partner. Content partners help Voyage in so many ways from spreading the word about the work that we do, sponsoring our mission and collaborating with us on content like this. Check out our conversation with Julie below.

Hi Julie, thank you so much for sitting down with us again. For folks who might have missed our initial interview, can you start by briefly introducing yourself?
I’m Julie Roland and I’m 28, a Lieutenant in the Navy, a helicopter aircraft commander, and a magician. I’m the co-creator of the Just Tryna Make Friends Show, the creator of the Firehouse Variety Show, the host of Tap Fever Studios’ Sunset Sounds, and am about to begin co-producing the Comedy House Show at the Soho House in Los Angeles. I’ve been deployed all over the world, performed magic and music on all kinds of naval vessels, and have hosted shows in SD, LA, SF, and NYC. I am currently working to help certify ships for flight operations at Afloat Training Group SD. I also recently played a French tarot card reader on a 1920s immersive experience, so I suppose I’m all over the place. 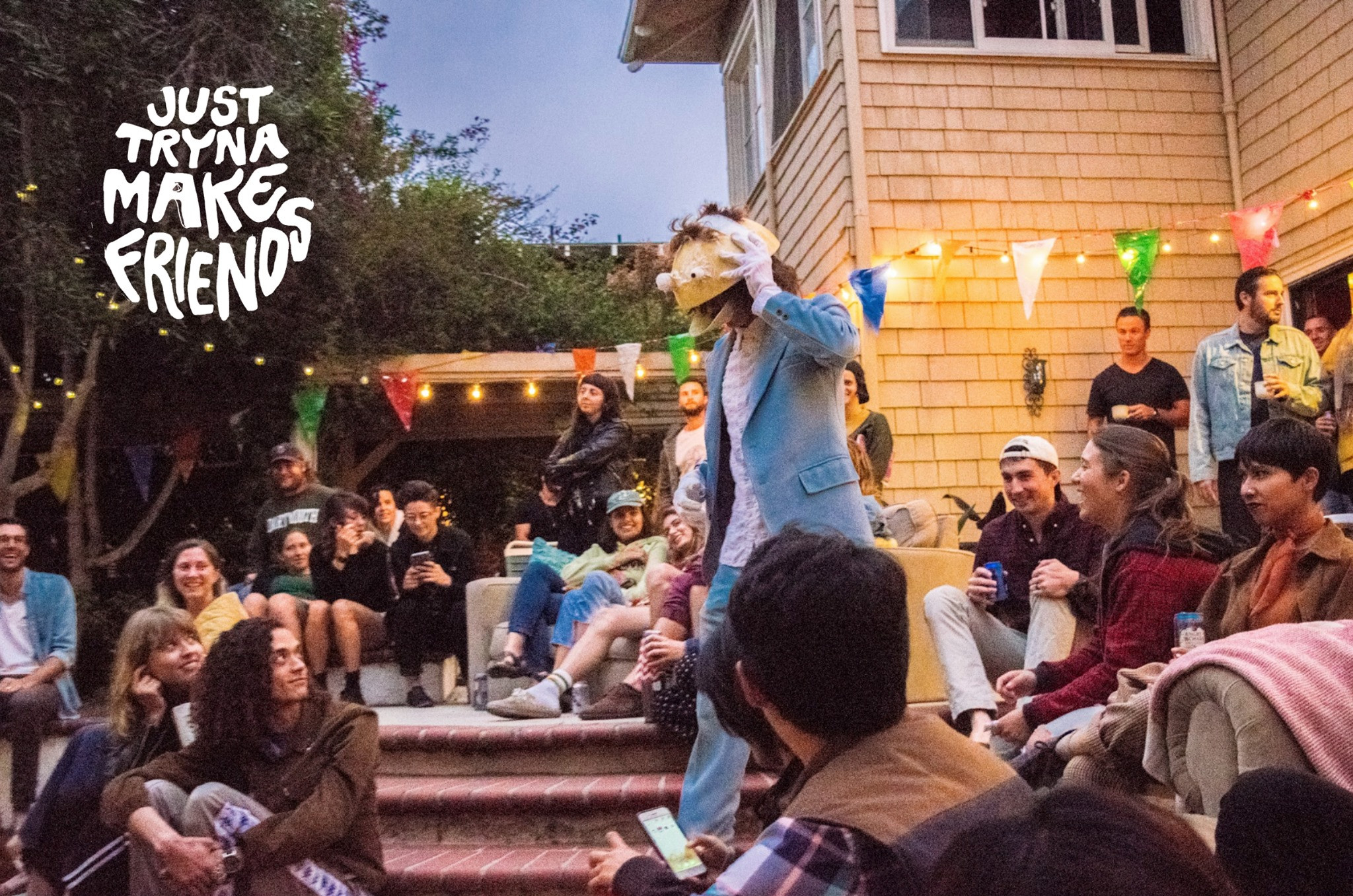 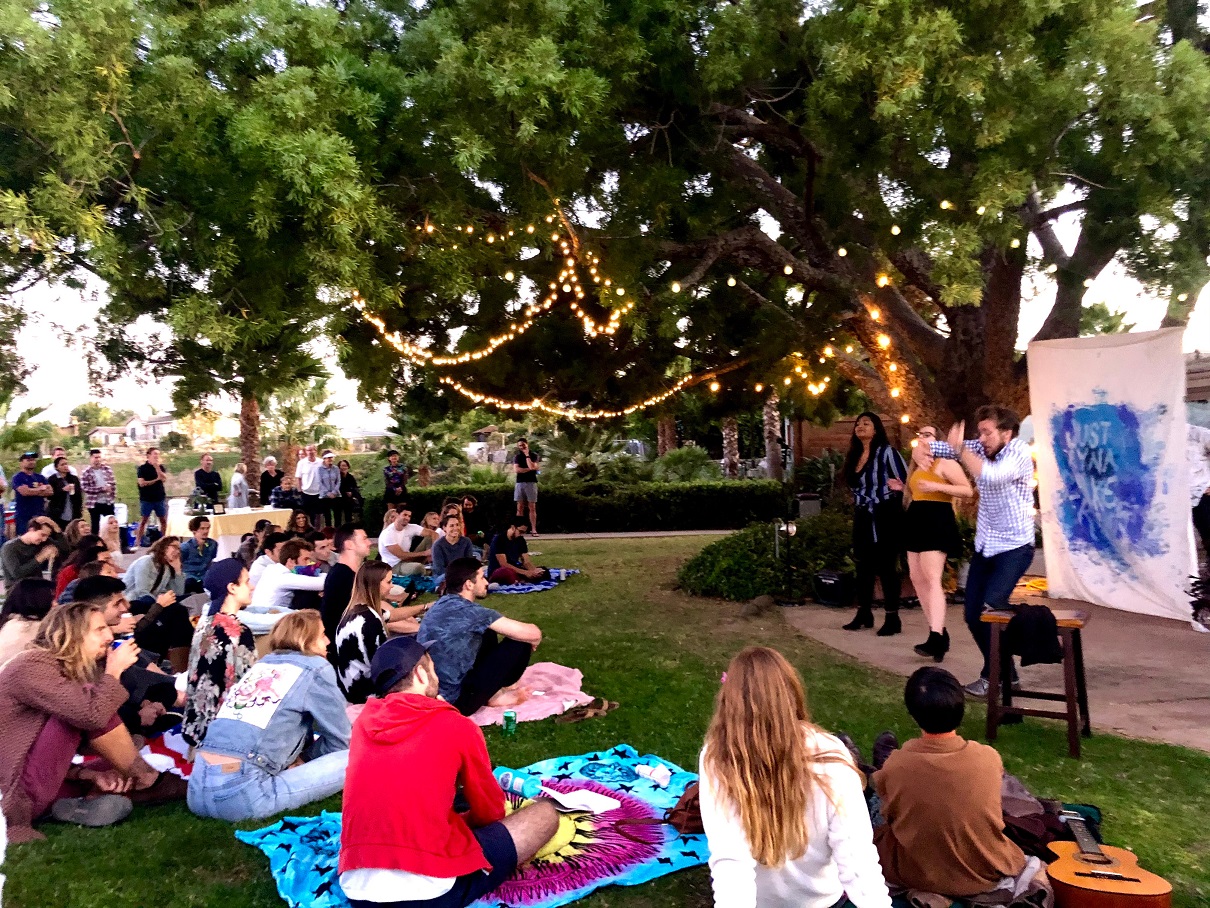 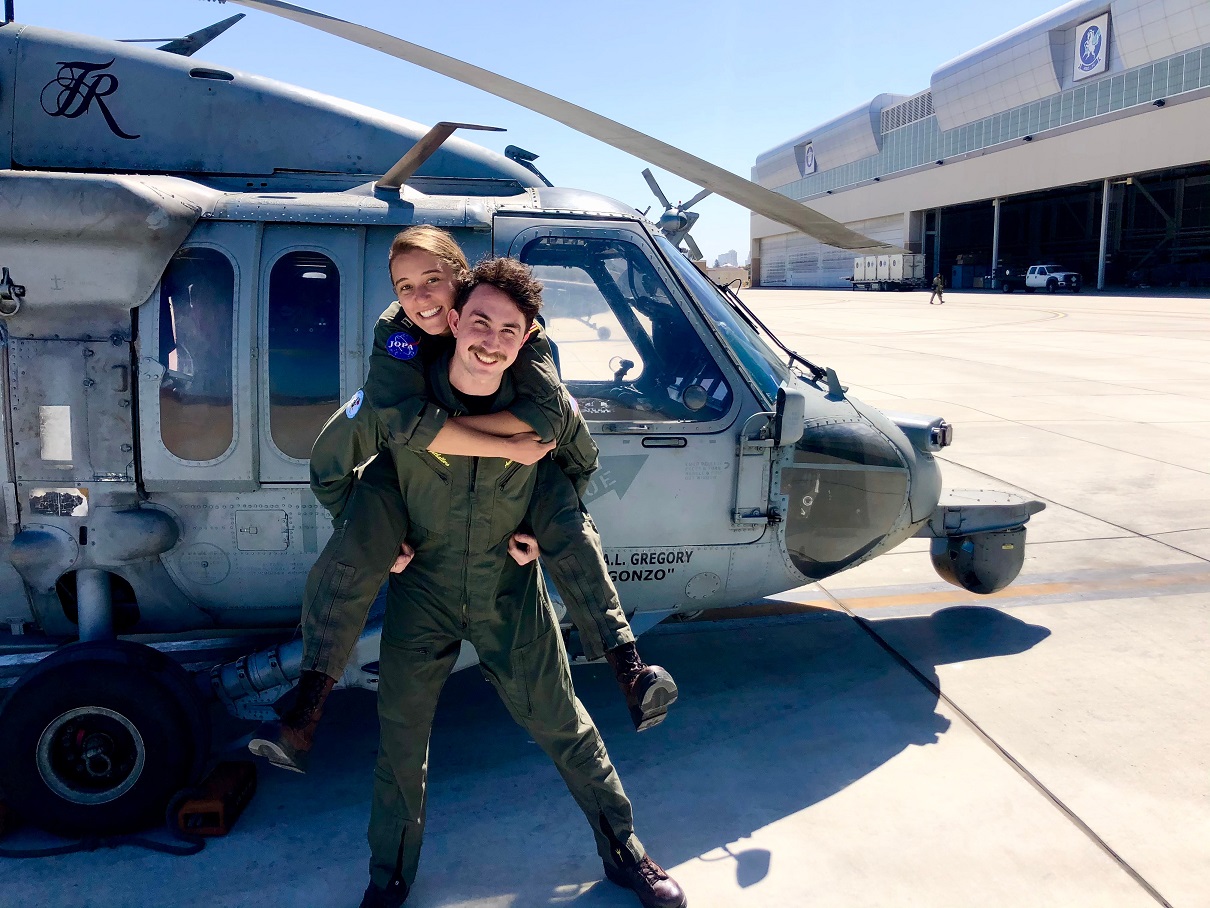 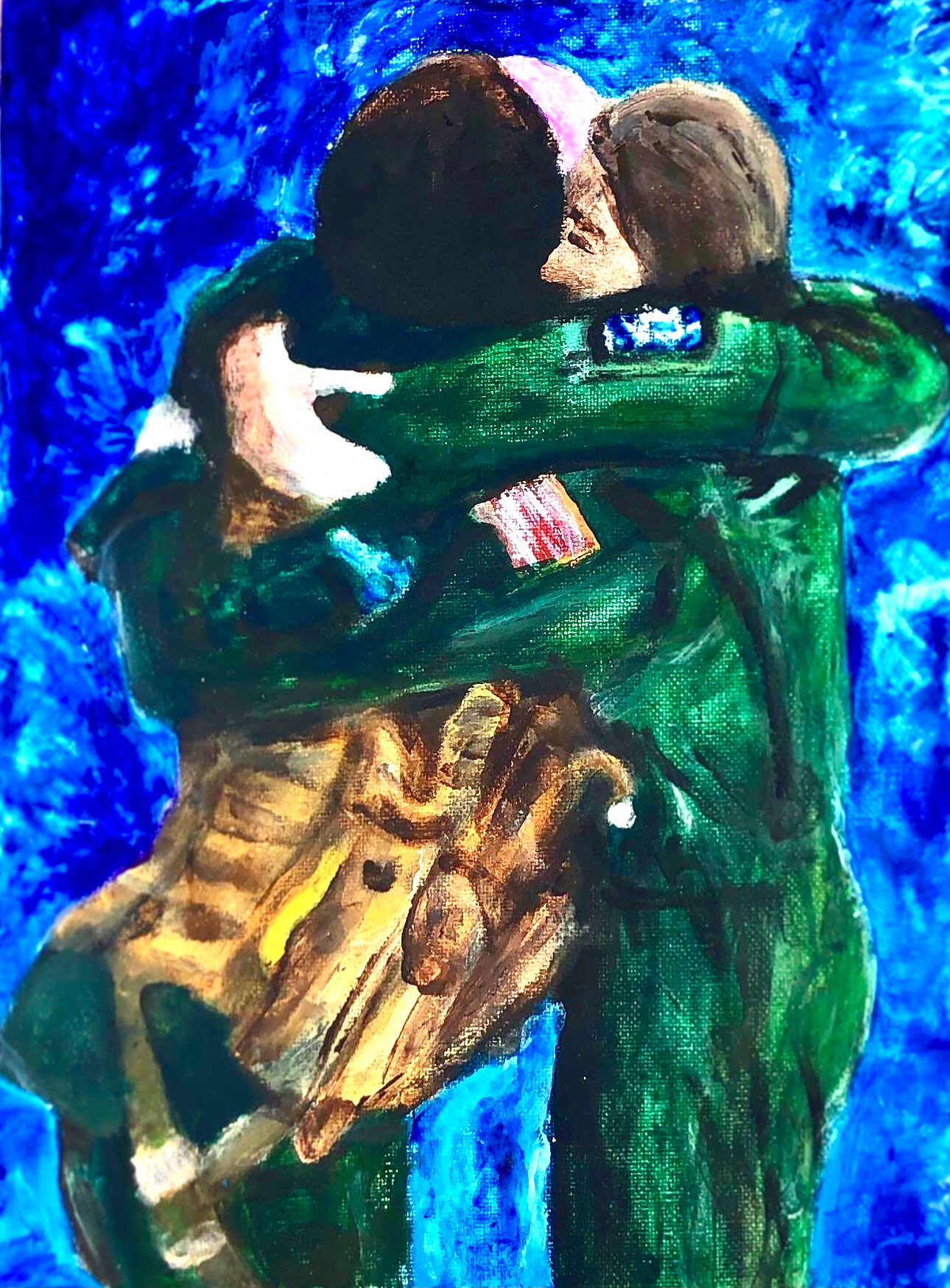 What are the goals for your projects in San Diego?

The Just Tryna Make Friends Show is the project I’ve been working on the longest, and it reflects many of the goals I have for my other ideas. We say we’re “just tryna make friends,” but I’m really trying to build a stronger, more inclusive San Diego. Our events are by the community, for the community. I’ve put shows on in six San Diego neighborhoods, featuring artists and an audience that come from all over the city. At our shows, from the moment you arrive, we try to facilitate a spirit of neighborly love. We want you to introduce yourself to your neighbor, we want you to stay after the show and meet the artists, we want to talk to you ourselves and make you OUR friends, we hope you come to the next show and bring more friends, and that between shows you introduce your new friends to your old friends… The goal is really to build community—I’m just using a backyard variety show as the medium.

Promoting the arts is another major goal for me. It is a gift to be able to give a stage to passionate artists. I like booking a range of experience levels at JTMF; one act might have an open mic night vibe and the next might be a polished band who has toured the country and played major music festivals. I also deliberately repeat while hosting that ‘I’m not a comedian, this isn’t my day job (and any laughs I get are going straight to my head).’ My intention with both is to blur the line between audience and performer. It’s wonderful when someone comes up to me after the show and tells me that they have an art that they’ve never shared with an audience but suddenly are feeling brave enough to try (“if you can get up there and do it, then why can’t I? I’ve been playing guitar for ten years!”) If the way I’m curating the show empowers people to want to get creative and share it with others, then it is supporting the arts in that way too. I’d love to be enabling more creativity. I recently played a small role in helping Colin Jones (@colinjonesofficially) put on a concert to showcase some of his new singles. My name wasn’t anywhere on the event, but it was an absolute joy and honor to be a part of something like that anyway.

In general, I want to help people enjoy a night out that they can’t get anywhere else. The goal is for them to have fun and feel like they were a part of something special and original happening in San Diego. For instance, at Firehouse, I want people to say to their friends, “Firehouse puts on a super cool variety show! No one else is doing anything like it!” (if I can pull that off, then I think they’ll let me keep putting on shows there, and each show means another lineup of artists I can showcase). I really just want people to leave my events having had a fulfilling experience; it’s a bonus if they make new friends.

There are so many things I want to do that I suppose one long term goal is to be able to pitch any crazy event idea to someone with the right venue for it, have them look at my past projects, and say, “alright, sounds good, let’s give it a go.”

What do you see yourself doing in five years?
I’ve been in the military since I was eighteen and have at least four more years to go which makes it difficult to imagine doing anything else. It’s possible that in five years I’ll still be flying, deploying, and taking on even more leadership responsibilities. No matter what I’m doing, I hope that I’m helping people. There are infinite ways to serve your country, community, and world; I hope whatever I’m doing is in the service of something bigger than myself. If I’m in the Navy in five years, then I hope I’m still involved in the arts in a big way.

Who are some of your biggest influences? Who has helped you along the way?
I feel my mom’s influence in everything I do; she inspired a love of community, collaboration, creativity… She passed away when I was eighteen but her memory continues to inform my choices.

As far as who has helped me, JTMF wouldn’t exist without my trusted friend and co-producer Emilia Barrosse. She challenges me in all the right ways, makes everything more fun, and helps keep the shows authentic and friendly, always. Mat Dann has been a huge help (and reliable comedy act) since the beginning of JTMF and is responsible now for bringing me into Soho House show (Mat, Emilia, another comedian Matt Catanzano, and I will be producing it together). He was one of the first people “in the biz” to suggest I might have a knack for hosting, and I’m so grateful for his early (and ongoing) support. I also want to give a shoutout to all my roommates throughout the years who have helped clean the house before and after shows and tolerated the crowds, noise, etc. My husband Andrew and my sister Lucy are the best teammates (and sports) a girl could have. They bear the brunt of my stresses and love me through all my antics. Finally, without such a supportive audience, and without the passion, talent, and generosity of all my artists, I’d just be crackin’ silly jokes into a microphone alone in my backyard.

What makes an event successful?
I just want people to have an awesome time. I want every single person who was a part of the event to walk away buzzing, feeling giddy that they got to have that experience. Nothing else matters. If we start late, if we go long, if an act drops out, if I forget to promote the next show, who cares? If I go over budget, then I’ll be thriftier next time. If I make a joke and no one laughs, then I’m just more relatable. As long as I’m the only one stressing out before/during/after the event (which means I have to make sure these slip ups don’t affect my performers, the audience, the venue, etc.), then everyone else gets to walk away simply having had a blast. Of course, ideally it runs smoothly and I don’t stress about anything either, but I’ll take one for the team any day. Success is if, for those few hours in that space, there was magic. It actually does feel a little like performing a magic trick. No one needs to know how long I’ve practiced the sleight of hand I just used; I know how much work went into it, but it’s just not the point. There’s a lot of hard work that goes on behind the scenes to pull off an event. 23 years of practice have gone into some of my magic tricks. The payoff is worth it every time.

Honestly though, how often do you get an evening full of comedy, music, and magic? How about puppets and poetry? Or fire sword dancing and bubbles? These shows are just…fun! They inspire laughter and emotion and wonder. I want my events to do that. I think these are things that enrich our lives. If I can play any part in bringing that to my community through an event, then I’ll feel it was incredibly successful.

What would be your dream event to host?
SNL 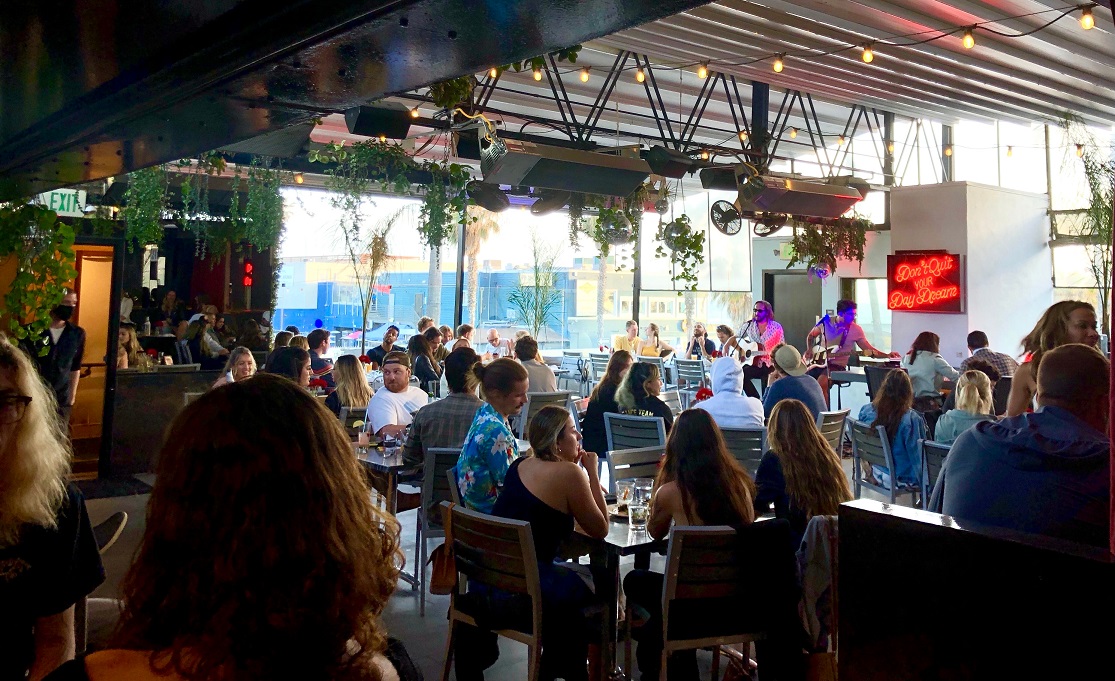 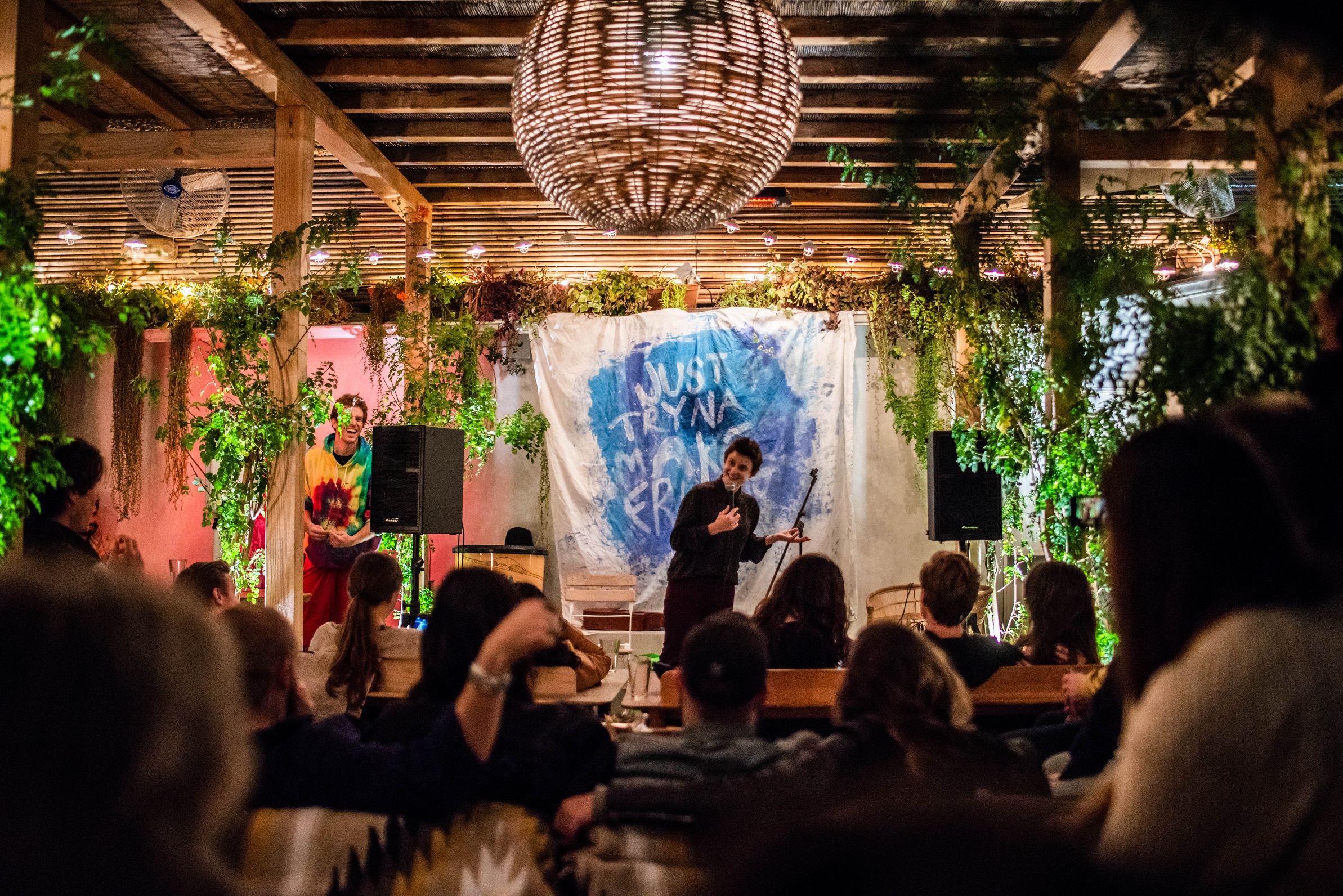 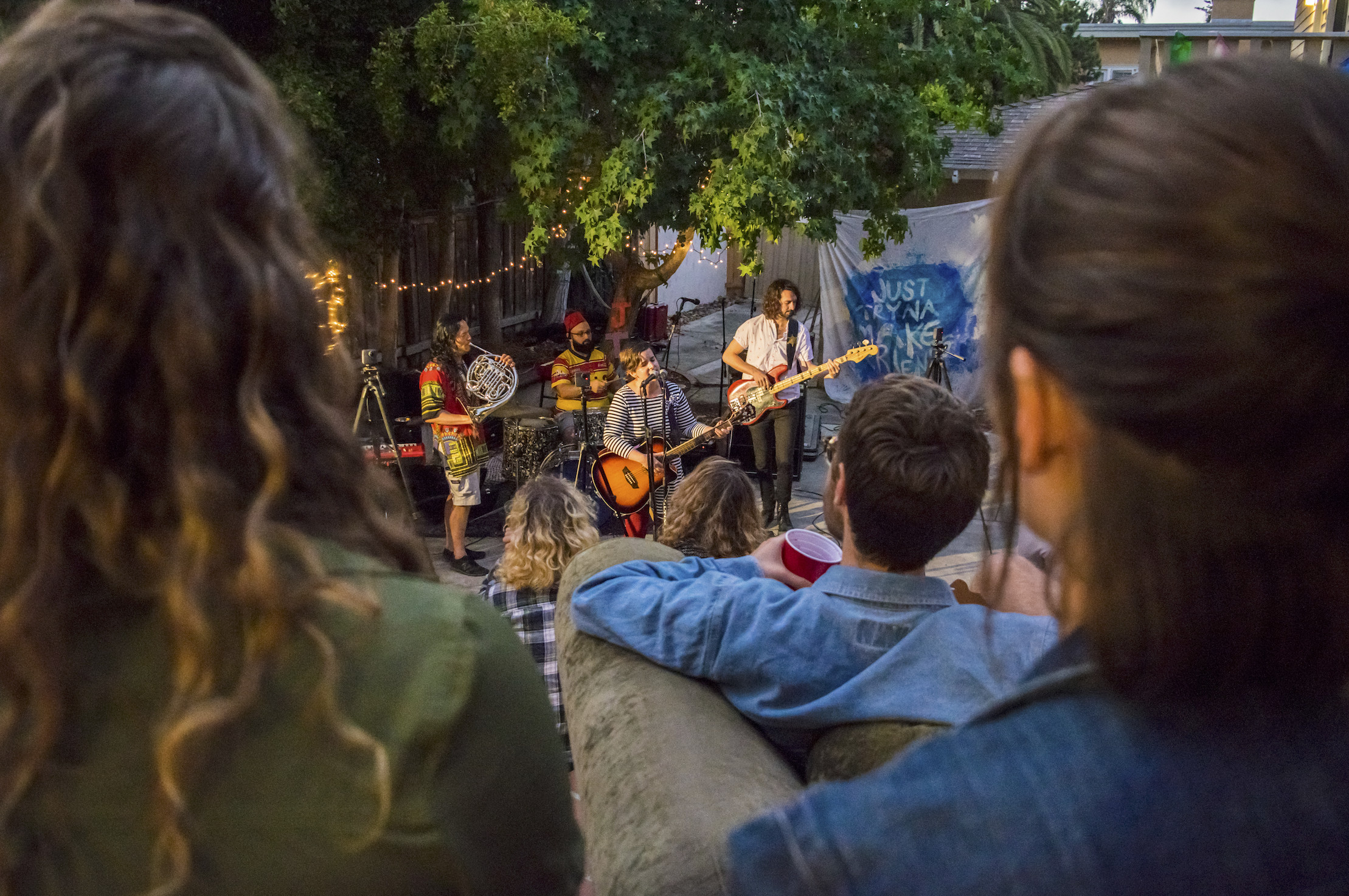 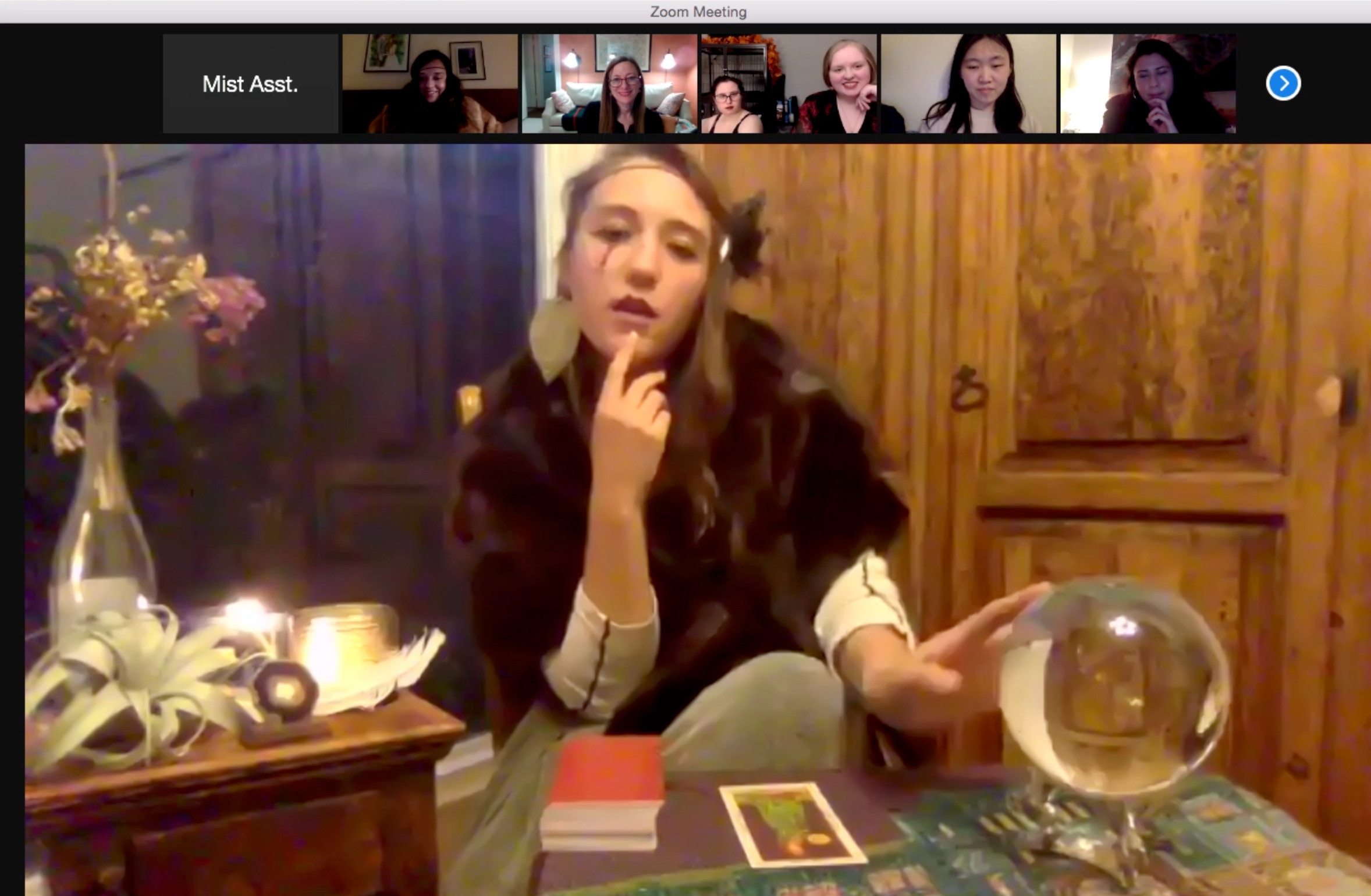 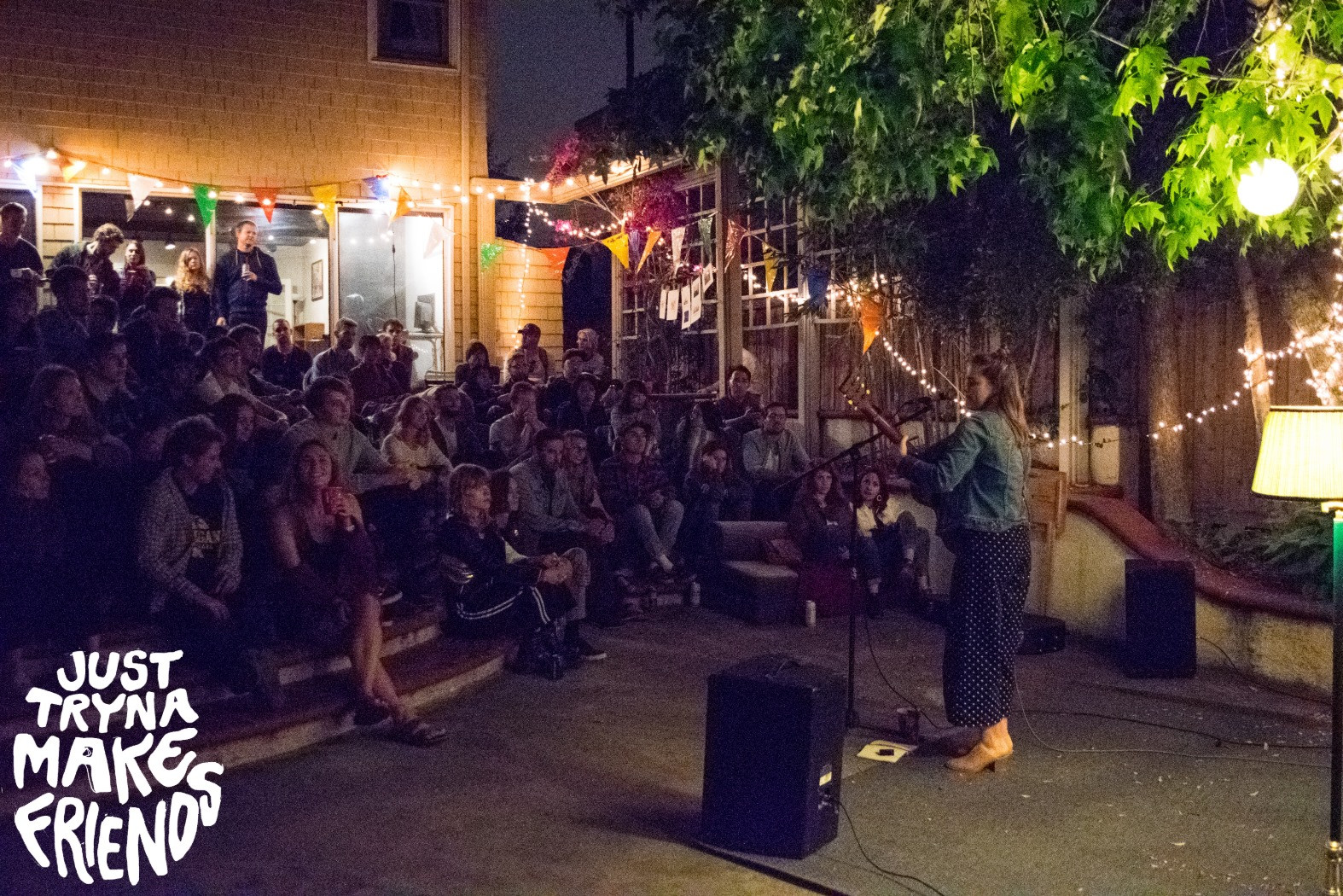 What’s your next big idea?
I have soo many big ideas, and they should all be kept a secret until I can execute them! I know I want to keep throwing original events of all kinds. I want to take types of shows that already exist, flip them upside down, and come up with fresh ways to do them (I almost listed some of my top ideas because I got so excited, but just stay tuned!). I will say that I want to plan some big charitable events. Also, I’ve become quite interested in immersive theater… In fact, stay tuned for an epic “Once Upon a Time In the West” themed event coming in July. I’m working with Stacie Daigle (of @thesdcollective) on that, and it should be a really special evening.

Alright, so before we go, how can our readers connect with you to learn more and show support?
Instagram is probably the best place to get in touch / see what I’m up to: @jyrola. Slide into my DMs with ideas for events or share your art with me and let’s get you on a show!

I also have a (top secret) page for my artwork: @jyrolart. I’m pretty bashful about sharing my paintings but I should lead by example! This one is private but I’ll approve ya if you’re curious. I really have not told people about this account; I think I have one follower.