Life and Work with Hannah Trujillo 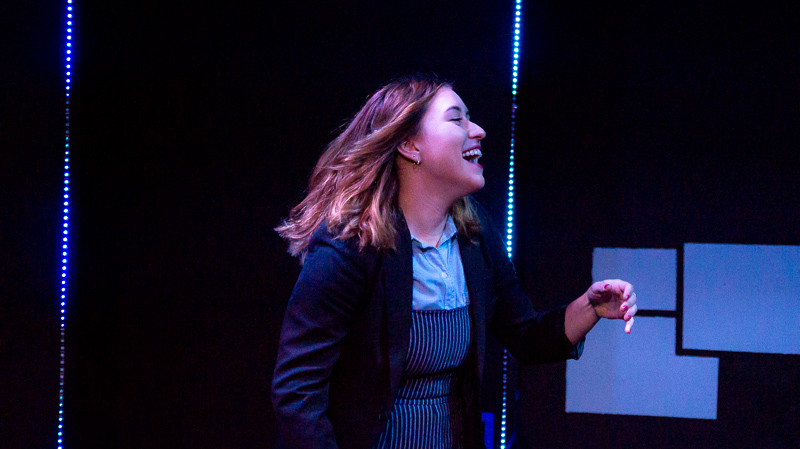 Today we’d like to introduce you to Hannah Trujillo.

Hannah, before we jump into specific questions about your work, why don’t you give us some details about you and your story.
So… I actually was a figure skater as a kid. My poor parents woke up at 4 am to take me to the ice rink to train, and then to school, and then back to the ice rink and then home for dinner and repeat. When I was about ten, I was cast in Actors Theatre Phoenix’s -The Pillowman-. So there was an eight-week-interruption in skating and training while the acting bug took over. My dad is an actor and being backstage was not foreign to me– we used to joke that I grew up backstage in green rooms and in the wings. But being in a rehearsal process was new and invigorating and being on stage hit different than a short program.

Not long after, the family moved to California and I went to a Disney acting studio and then to the San Diego School of Creative and Performing Arts for high school where I majored in acting. Immediately after graduation, I was accepted to the California Institute of the Arts, where I achieved my BFA in acting and specialized in classical texts (hey Shakespeare!), clowning, Roy O Hart voice and various movement styles. It was such a well-rounded education and a truly amazing place filled with experimental artists and a huge push for agency as a citizen artist. Someone who is practicing their craft with their community or a social cause in mind. The enemy was art for art’s sake. It was glorious! In 2018 I took an original show called -Man Down- to the Edinburgh Fringe Festival that I wrote and directed. We were actually nominated for the Freedom of Expression Award from Amnesty International.

Since then, I work between Los Angeles and San Diego as an actor, director and teaching artist (and an array of other jobs in the theatre, but mostly those!). So I drive… A LOT. I’m inspired by works that create a visceral response in people. What’s important is that we make art that moves people. Most recently, I got to direct a high concept -Merchant of Venice- at my former high school. The process was awesome and the kids were so game to play and try their hand at one of Shakespeare’s more intense and controversial pieces. I made sure the focus of the story was on Shylock, and the persecution and injustice that she faced.

Right now, since the time is ever shifting with developments regarding Covid-19, a few projects have been postponed or put on the back burner. However, I think it’s important to remember to take care of yourself and your community during these unprecedented times. Work can still be made online and over skype and social media. It’s crucial that we continue to adapt in this industry, and right now is a perfect opportunity to see how much we can use our artistic practices to build community through social distancing, and entertain through the many platforms we have. My heart goes out to everyone affected by this pandemic. Yet I know there are so many artists who are adapting and making their work accessible via Instagram and Facebook Live. Onward.

We’re always bombarded by how great it is to pursue your passion, etc – but we’ve spoken with enough people to know that it’s not always easy. Overall, would you say things have been easy for you?
While my path has been pretty linear, it hasn’t always been easy. I think being in any creative industry can be tough. It’s so easy to get insecure and start comparing your strides and successes to those around you. The important thing is not to get caught up in that nonsense. If you have something meaningful to say that other people can relate to and feel seen by, then you deserve to say it through your art. I think the toughest lesson I’ve learned is how to take criticism. When I took my show to Edinburgh, we had reviews regularly, and most of them were good and loving and supportive, but some of them really felt like a personal attack and were hard to swallow– especially after coming out of such a supportive educational environment. There will always be criticism. Always.

And if it’s worth listening to, it will engage with the work and question things you maybe hadn’t paid attention to before, thus challenging you to make better and more informed work. I think criticism is also particularly tough for women to hear because we’re subject to criticism all the time about everything we do, the way we look, and the way we carry ourselves. My biggest piece of advice is to find people who genuinely support you. There are people out there who will believe in you and will not judge you for having ambition and having something gutsy to say about the world. Find those people and be there for them as much as they are there for you. We ought to be fostering as much loving, supportive community as possible. And, always support other womxn. Especially women of color.

We’d love to hear more about your work.
I work as an actor, director, and playwright. I feel so grateful to be able to do what I do everyday. My work as a playwright informs the way I move through the world and the projects that I attach myself to. I live for high concept work that defies the traditional theater I grew up with and love so much. I’m all about innovation and bolstering voices of those less heard in the traditional theatre.

In particular my work tends to explore feminism, social and ethnic tension, and trauma. (What a delightful afternoon!) I think this world is so hungry for empathy and respect for people and the planet, and that’s my mission. As an actor, I tend to play a lot of younger, clown characters –and mean girls. Which is a little antithetical, but I’m here for it. I’m not a dancer, but I’m an extremely physical actor and director. I love staging complicated movement sequences in pieces I direct, and I love challenging my body to tell a story I didn’t think it was capable of. My work is always dynamic, engaging, and has some humor in it, no matter the medium.

What advice would you give to someone at the start of her career?
Support other women as much as possible. You know how hard your own experience is, or has been. So support any and all women who are working to be in this industry. Also, know it takes time. It will take a few years before you get to where you know you should be. Enjoy that time! You’re learning everything you need in those first few years of struggling to be prepared for when your spotlight comes. Acting and the entertainment industry are careers, not just hobbies. You have to build your reputation just like anywhere else. 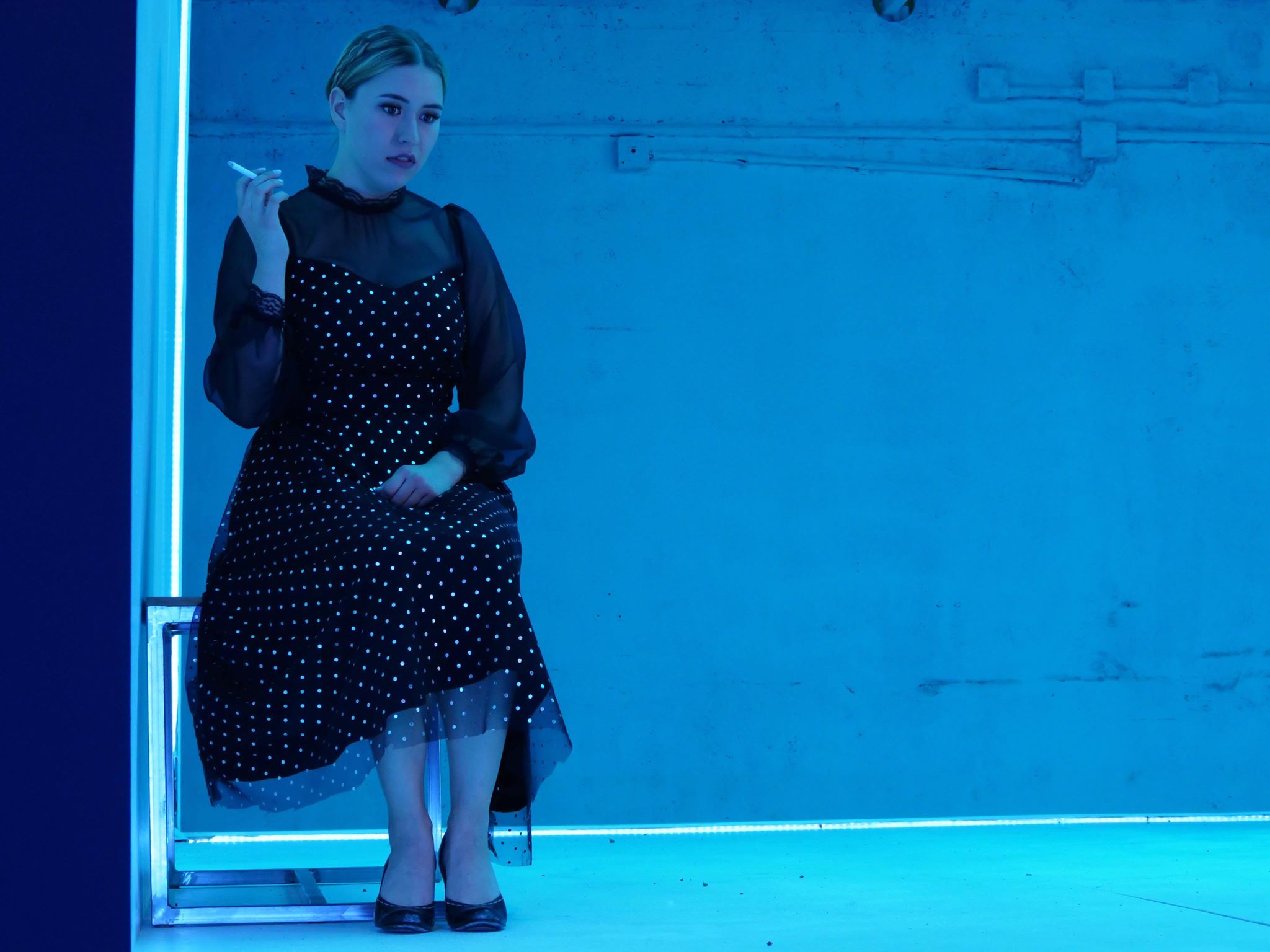 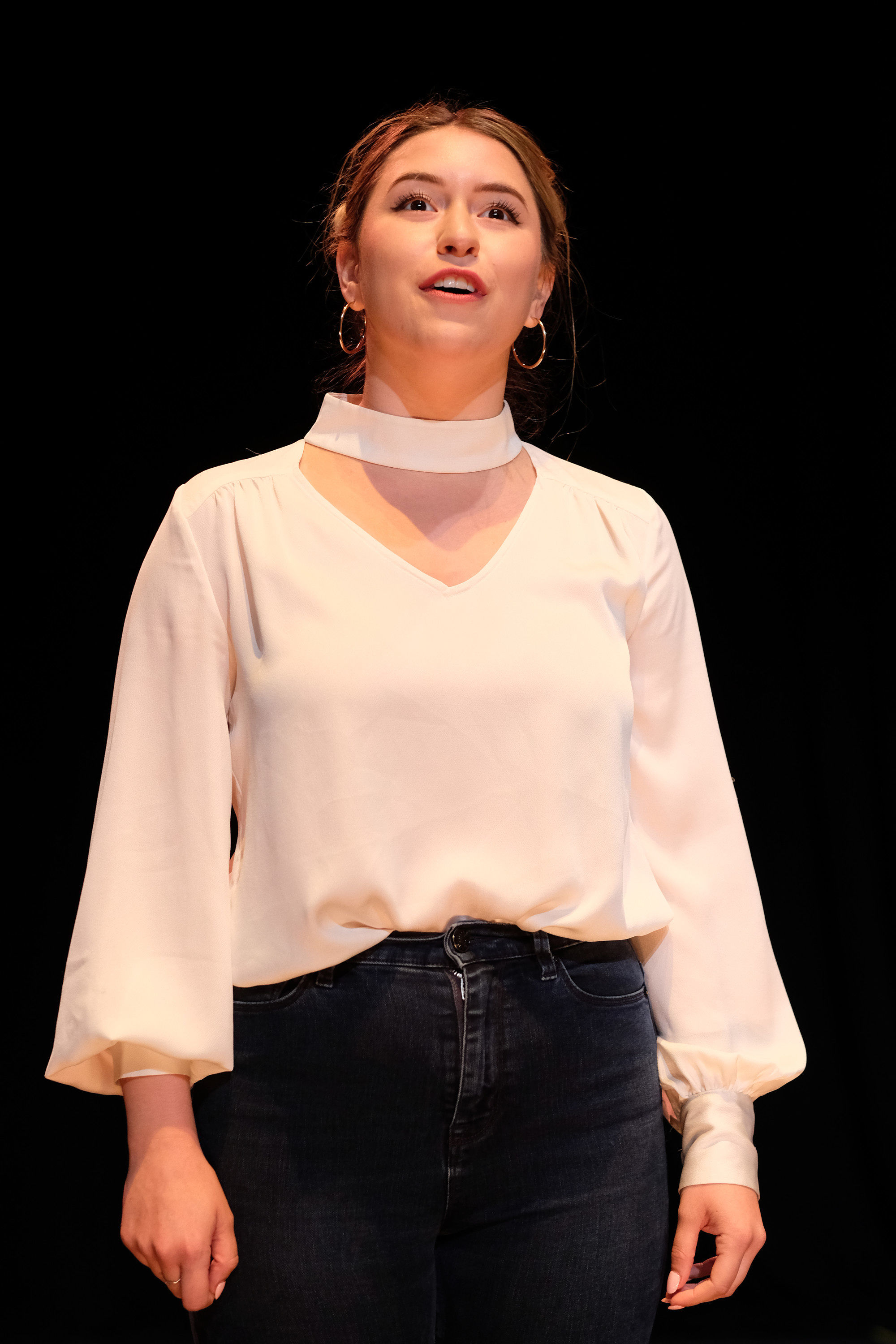 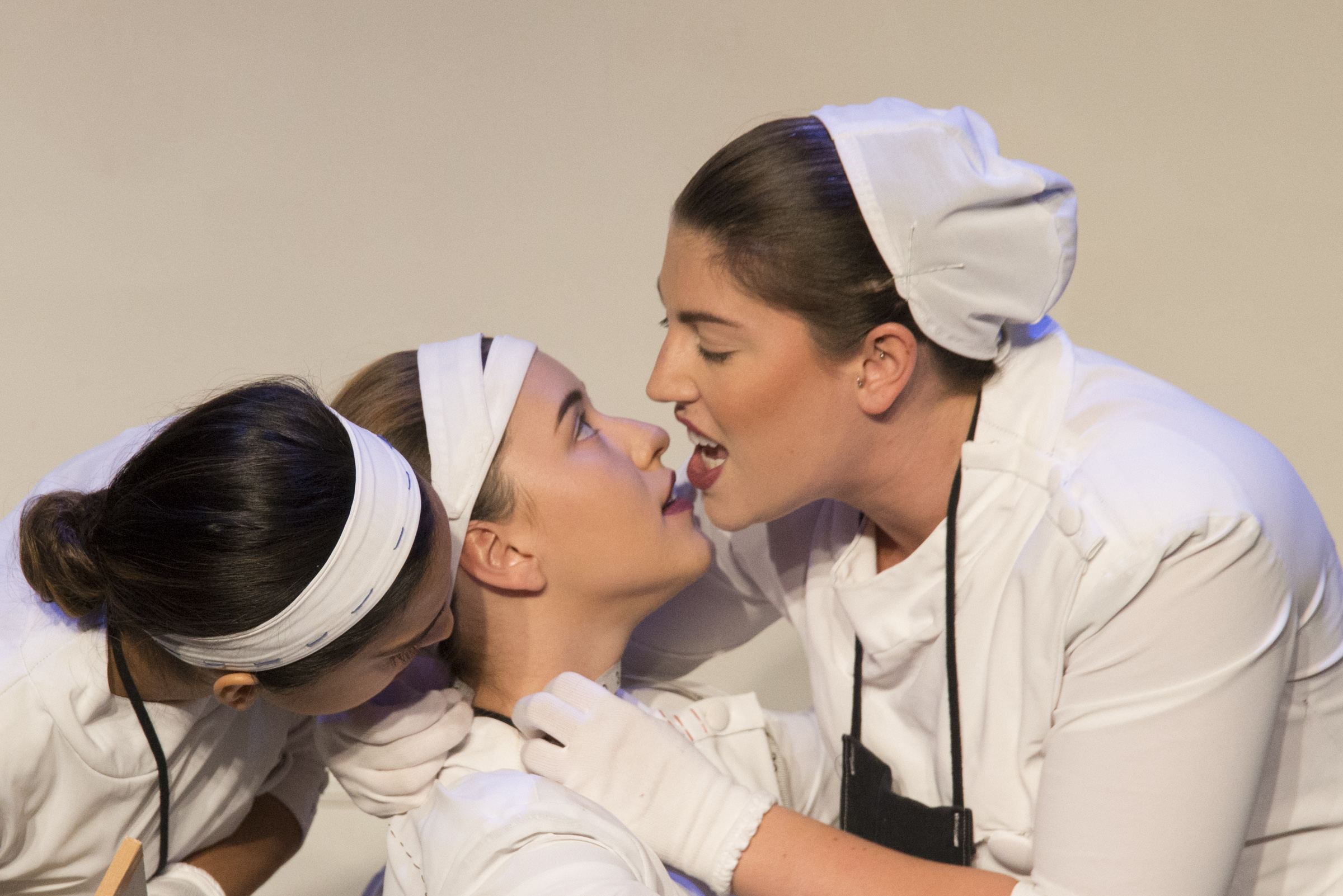 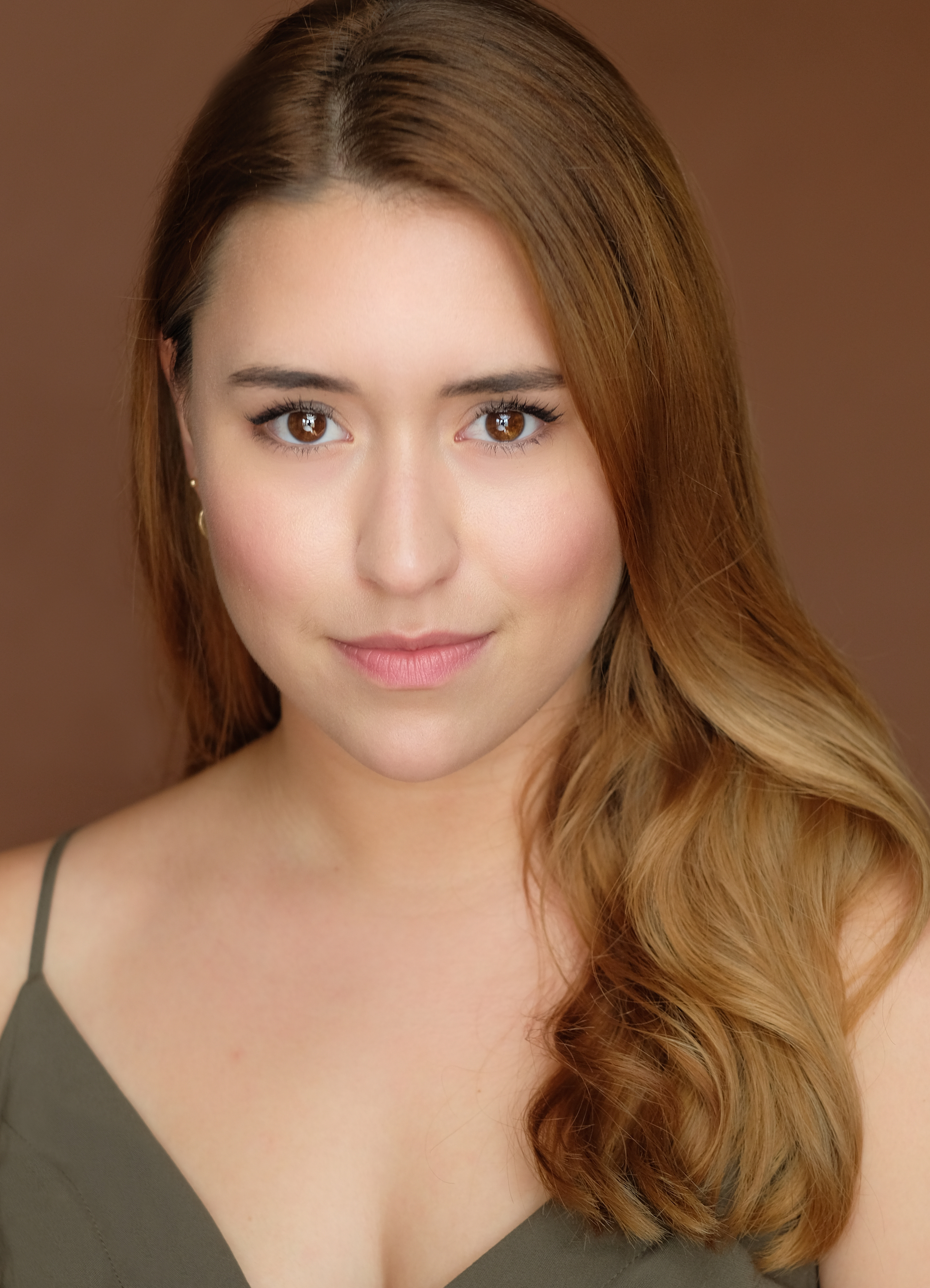