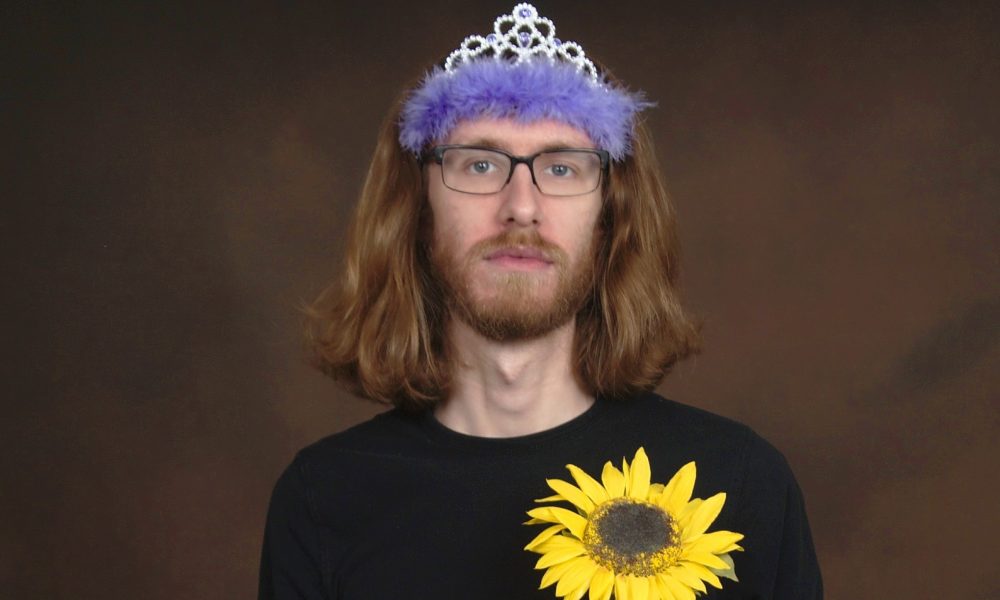 Today we’d like to introduce you to Joseph Bourdeau.

Hi Joseph, we’re thrilled to have a chance to learn your story today. So, before we get into specifics, maybe you can briefly walk us through how you got to where you are today?
I grew up in Tampa, Florida which is a lovely place where I was sunburned a lot and had armadillos in my yard. I don’t really come from a musical family, although my parents have always been very supportive of the whole thing, and I started learning music at eleven or twelve through playing bass clarinet in the school band. At the same time I started dabbling in piano and guitar and things like that, and my parents were very nice and got me this little electronic keyboard for Christmas one year. That instrument had a multitrack function where you could record a few minutes of music, then play it back and add more layers on top, which I ended up getting super carried away with. In the end I spent way more time writing music, and playing with all the different sounds the keyboard could make than actually practicing the piano. Which turned out fine, because soon after that, I started playing drums, and that stuck a lot better than any of that other stuff and became the first instrument I actually practiced seriously. I think these early experiences of recording music with no real idea of what I was doing and trying to figure out different instruments on my own helped me think about music as something you could just sort of do, rather than having to learn from somebody else or from a book all the time. Throughout high school, though, I kept playing bass and contrabass clarinets in band, (out of books and stuff) while playing drums in marching band and in all kinds of little rock and roll projects with friends. Towards the end of high school, I ditched the clarinet altogether, and started trying to learn ‘classical’ percussion (timpani and marimba and such) so I could audition for college music programs. That was hard, and I was super terrible at it for a long time, but ultimately I was able to enter the University of South Florida to study music education.

After a year of doing that, I decided that I wanted to see what I could actually learn about writing music, and was also accepted to the composition studio. During undergrad, I reconnected with a good friend from high school, and we started performing together as a duo playing some weird metal songs he had written. He’s a guitarist and a really cool guy who I still work with a lot. He’s also an absolute wizard of walking into a thrift store with fifteen bucks and coming out with some amazing instrument nobody’s ever heard of. Slowly, we started picking up members for our “band” until we had became this weird amorphous collection of like six or seven folks who all split rent at a storage unit we practiced in. We ended up in a situation where sometimes I would play drums with a certain set of musicians or sing with another set, and different subsets of this core group were always rotating around,  switching instruments and things like this. I think that experience, where everyone had multiple roles and used their personalities as a way to navigate all these different musical situations was really gratifying and has always affected the way I approach making music. Then I finished undergrad, taught elementary school music for a little bit (which was fun!) and eventually came to California for grad school to keep stuying composition!

I’m sure you wouldn’t say it’s been obstacle free, but so far would you say the journey has been a fairly smooth road?
Not always. Coming to California was difficult for me, and I had a lot of personal problems when I first moved here that dragged on for a while after I started school. I don’t really like to go into specifics about things like that, but a lot of stuff all came to a head at once and left me in a really bad place. I’m totally amazed by people that respond to difficult situations by throwing themselves into their art since I’m not that way at all, and it’s really difficult for me to work in times like that. When I’m not working though, I find that I’m really not happy, so it can be easy to just spiral downward if I’m not careful, which I’ve definitely done before.

Thanks – so what else should our readers know about your work and what you’re currently focused on?
I make music in a bunch of different ways; sometimes writing music for others to play, and sometimes performing things myself. I’m a drummer, but I also play recorders, an old violin and lots of other instruments (and toys and garbage!) when I perform and record. Usually, my music has a pre-recorded element that myself or other musicians play along with, and that gives me the chance to do a lot of fun “impossible” things I couldn’t do with live instruments alone. When you’re working with prerecorded tracks this way, things like a piano solo on top of a choir of ice cream trucks, or a kazoo orchestra are suddenly possible. I’m really interested in music that creates surreal situations like this, where lots of sounds that may not seem to “belong together” can coexist in a space and interact with each other in surprising ways. I’ve also always been interested in theater and humor. A lot of my music has a certain funny or sarcastic quality to it and often involves some degree of speaking, singing or acting. Sometimes I write my own text or “lyrics,” but more often I use scraps of existing things I like and quotations from other works.

Lately, I’ve been using a lot of text from a 1940’s encyclopedia of farming practices and the liner notes of old vinyl records, but I’ve also used folktales and the Bible and the all usual suspects. Quotation and sampling are really big parts of my practice, and in a lot of my work, there are fragments of music or lyrics that I’ve taken from other places, or recordings that I’ve sampled and repurposed. I like to make music that is always referencing the world around it while also acknowledging that it’s the result of my very particular experiences and can interact with other’s experiences in a variety of different ways. All of this makes for situations which are often a little bit chaotic and involve the performer doing lots of things at once. Lately, I’ve been working on a solo project called “Porpitid” which really collects many of these interests together in a super concrete way. The project involves using a couple of vinyl record players, radios, old video game systems, and acoustic instruments together in a live performance to form these dense webs of different kinds of music interacting. You could think of the music as being like a mixtape, but with the tracks “folded” over on top of each other and playing at once. That sounds like it would be really chaotic, but it’s also really amazing how often all these disparate things line up in really convincing ways and sound like they’re all working together. 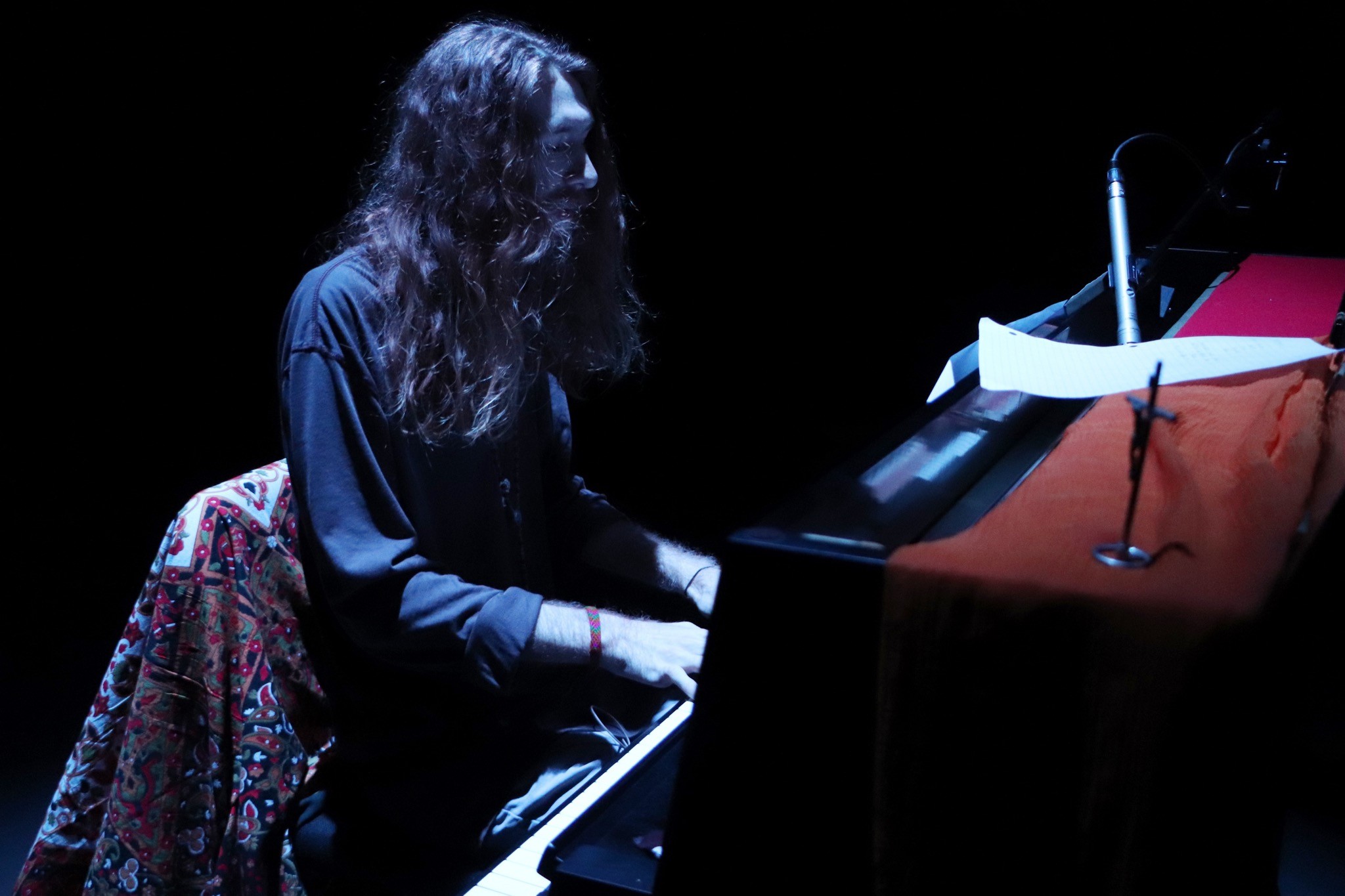 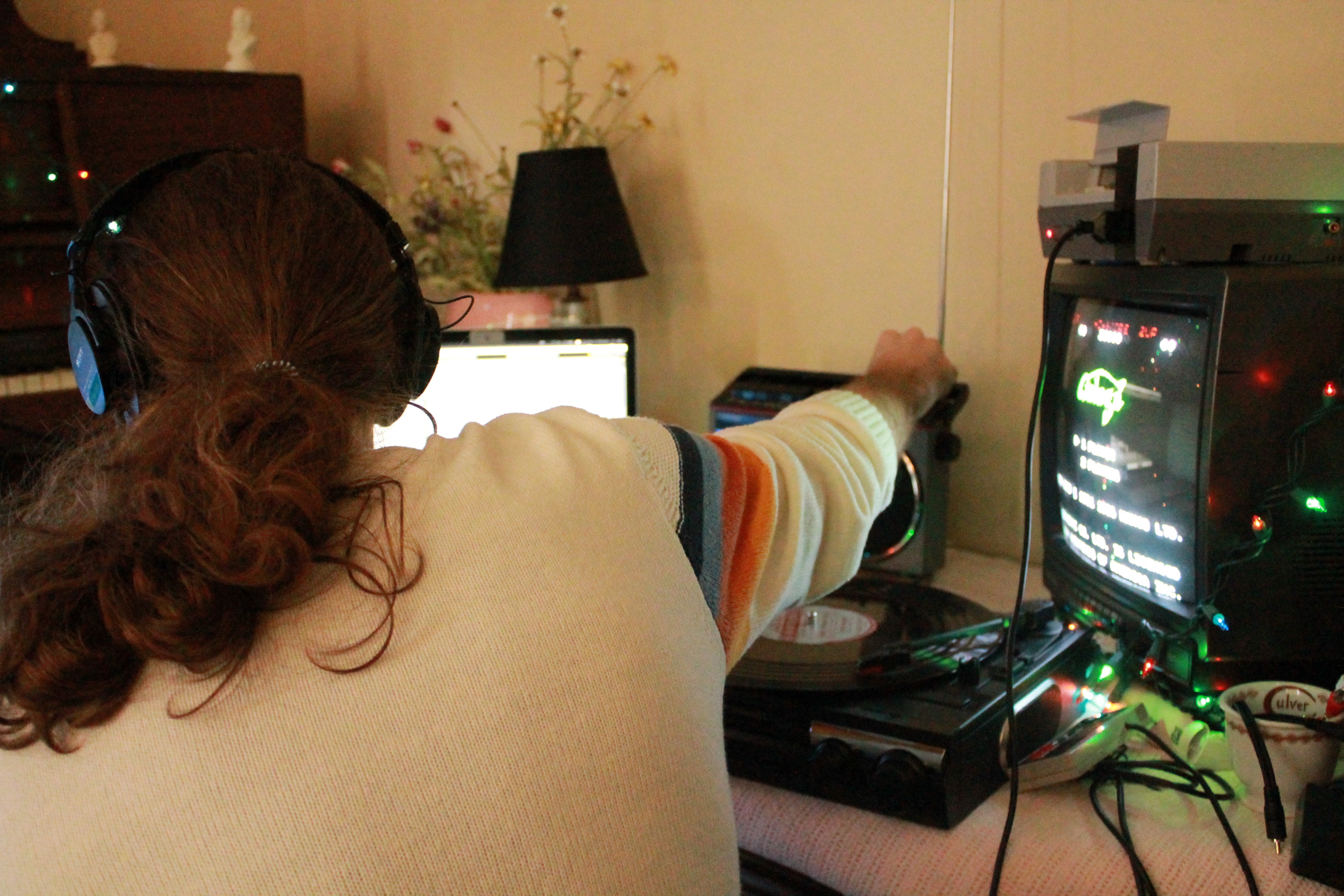 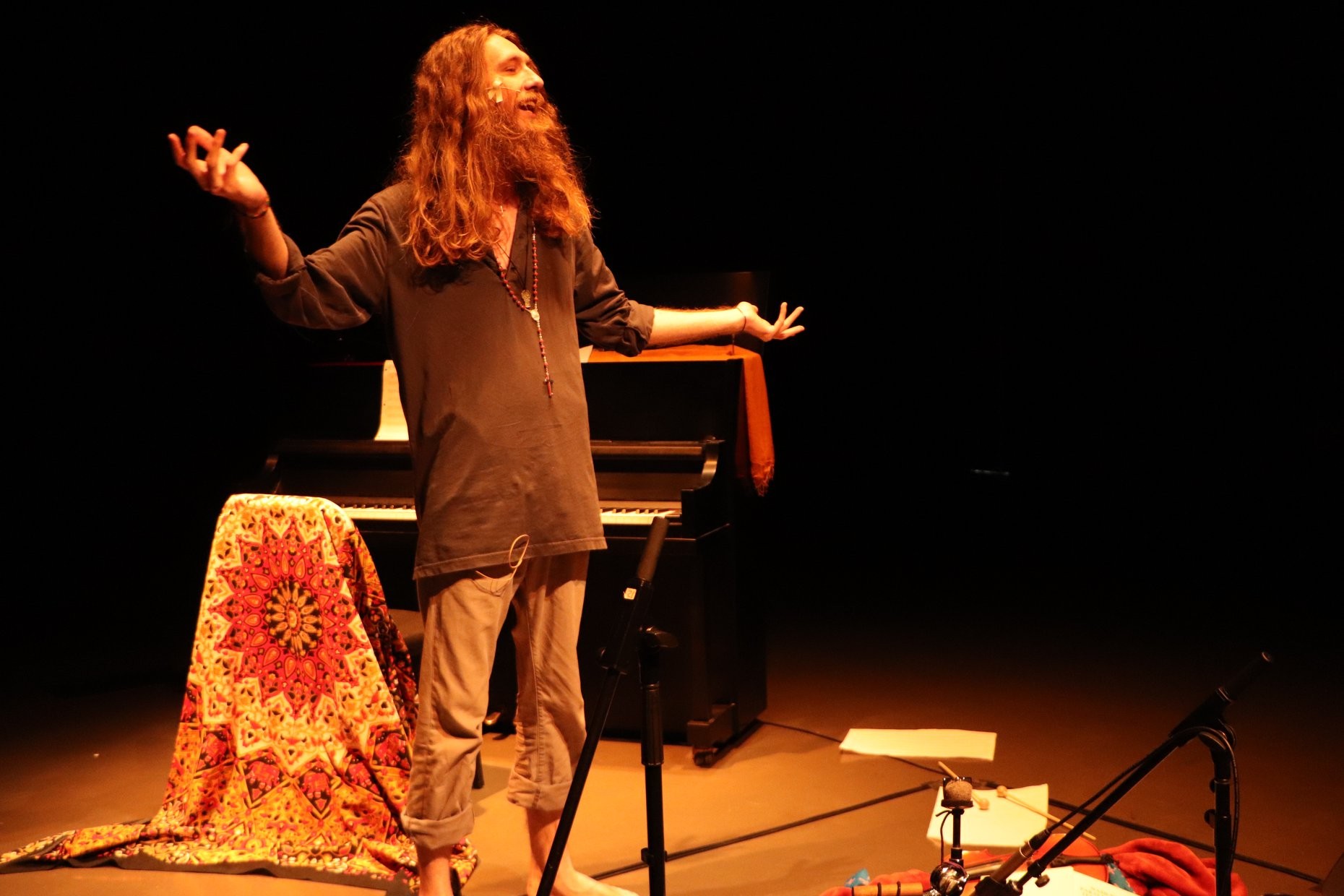 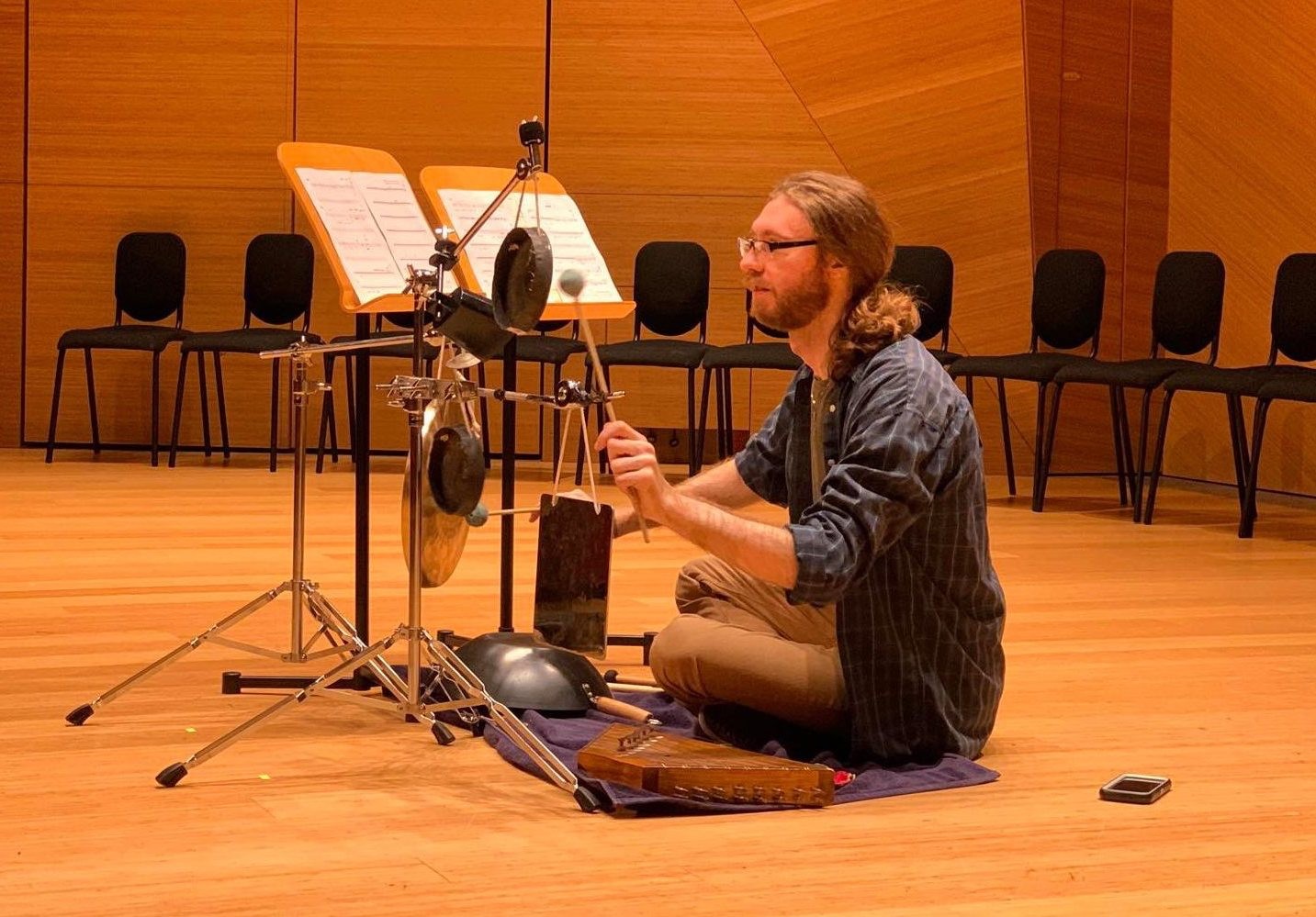 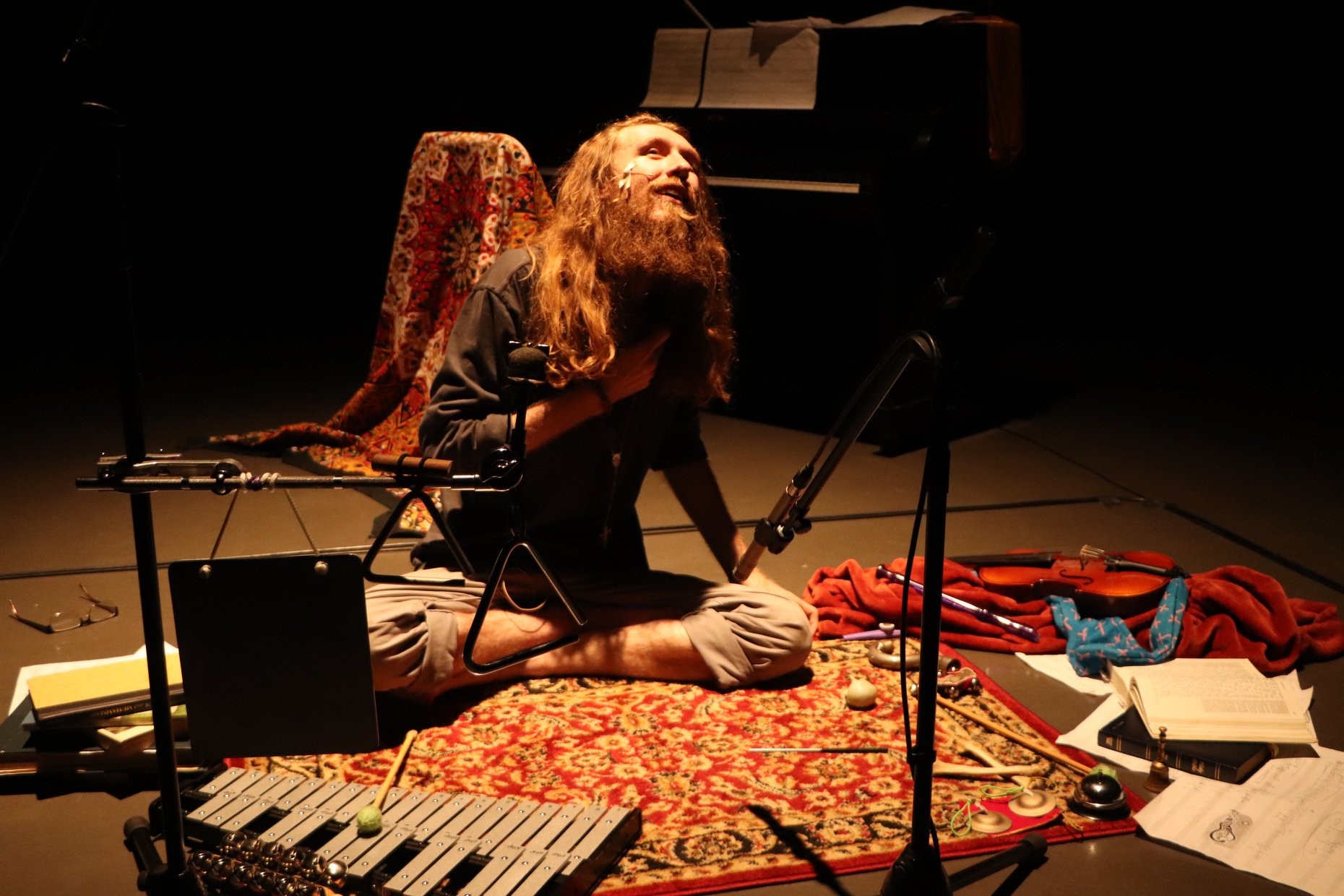 Image Credits
Photos 1, 3, and 6 are by Anqi Liu, Photo 2 is by Madeline Bourdeau Photo 4 is by Sherry An My personal photo was just taken at a Sears or something