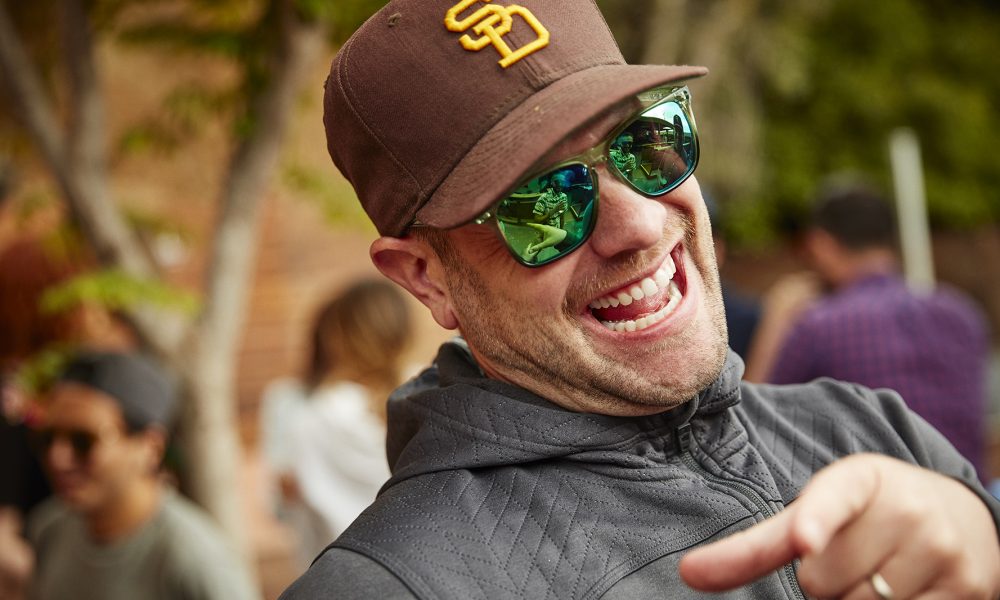 Today we’d like to introduce you to Adam Moyer.

Thanks for sharing your story with us Adam. So, let’s start at the beginning and we can move on from there.
I started Knockaround in 2005 when I was 23 years old. I had just arrived in San Diego for grad school at UC-San Diego. I had been an art major as an undergrad back on the East Coast, and I was pursuing my MFA in Visual Arts at UCSD. Looking back, I was very naive when I decided to start my own sunglasses company. I had recently lost a pair of expensive Ray-Ban sunglasses and I was intrigued by the perpetually sunny weather in San Diego.

The name “Knockaround” popped into my head at the same time (it was a word my dad used a lot when I was growing up). I came up with a logo, ordered some sunglasses, filed the new business paperwork at City Hall, built a small website, and I was up and running!

The next few years proved to be a little slow. I was selling a few pairs of sunglasses each week, for $5 each, mainly to friends (and friends of friends.) It was just enough to keep some extra beer money in my wallet, but not really enough to be my main gig.

But in 2008, when I finished up grad school, I realized that I didn’t want to get a “real” job… I just wanted to work on Knockaround and sell sunglasses full-time. My entrepreneurial fire really kicked in around that time and I found that I was getting a good return on all the energy I was putting into the business.

Before I knew it, I was moving Knockaround headquarters out of my tiny 1-car garage and into a real warehouse. I started hiring employees and sales picked up quickly. In early 2011 we hit $1million in sales and things showed no signs of slowing down. We moved two more times in 3 years to bigger warehouses. Celebrities like Natalie Portman, Matthew McConaughey and Snoop Dogg were rocking our sunglasses on the regular. We were getting some good press in magazines like US Weekly and GQ.

We’ve built a great team at our company. We’ve had employees come and go, but everyone that has worked at Knockaround has contributed to where we are now.

Today, Knockaround is doing really well. Building a business, and a brand is a kind of like a rollercoaster ride. There are setbacks, huge triumphs, highs, and lows. I’ve made some bad decisions, but I’ve also managed to steer the ship to where it is today.

Great, so let’s dig a little deeper into the story – has it been an easy path overall and if not, what were the challenges you’ve had to overcome?
One of the toughest things about being a young entrepreneur is encountering situations where you have zero experience to inform your next move. In other words, that moment when you say to yourself, “S!@#, what the hell are we going to do?” The next few hours (or days, or weeks) are usually followed with extensive Google searches, calls to advisers, meetings with the team, etc…

I’m pretty optimistic and I like surrounding myself with people that look at a challenge and say “We got this” or “We’ll figure it out.” Our VP of Finance, Ed, has something he says a lot: “Let’s jump off the cliff and build our wings on the way down.”

Some specific struggles we’ve had over the years? We’ve had huge shipments of sunglasses delayed during our busiest time of year. We’ve had website crashes. We recently had a break-in at our brand new office in Old Town.

For each of these situations, we first said: “S!@#, what the hell are we going to do?” But then we said, “We’ll figure it out.” And then we jumped off the cliff and built our wings on the way down.

Knockaround – what should we know? What do you guys do best? What sets you apart from the competition?
Knockaround is the original, affordable California sunglasses company. Our sunglasses are classically styled, come in a ton of cool colors and designs, and the average retail cost for a pair of Knockarounds is only $20. Our sunglasses are sold on our website, Knockaround.com, but we’ve recently started selling in stores, including several around San Diego.

We do special release sunglasses about once a month. The glasses have a unique design and come with special packaging. For example, last month we released sunglasses called “A1A”, inspired by Miami Beach in the big 80’s. 500 pairs of sunglasses sold out on our website in about 15 minutes!

Our sunglasses are customizable! On our website, there is a cool app where you can mix and match the colors and patterns on all the pieces of the sunglasses. We take your design and build the glasses at our warehouse here in San Diego. You design them, we build them!

And we’re passionate about helping out people in the San Diego community! With our Class Acts program, we work with a local charity called ArtReach and have local 4th and 5th graders design sunglasses. We pick three winners, produce the sunglasses, and 100% of the proceeds from the sale of the shades go back to elementary art education.

Our sunglasses are colorful, affordable, eccentric, and nostalgic—everyone should have a pair of Knockarounds!

What moment in your career do you look back most fondly on?
Thanks to Knockaround I’ve had a few “bucket list” moments—throwing out the first pitch at a Padres game, being able to buy my childhood dream car, getting to brew a special beer with my favorite local brewery—but as cool as they are, those things come and go.

The real “proud” moment comes about once a month. I’m usually driving to work in the morning when it hits me just how lucky I am. I own a sunglasses company in San Diego! We’ve built a huge, loyal following of fans! We’re making money! I work with people that I like! I wear flip flops to the office! I did it! 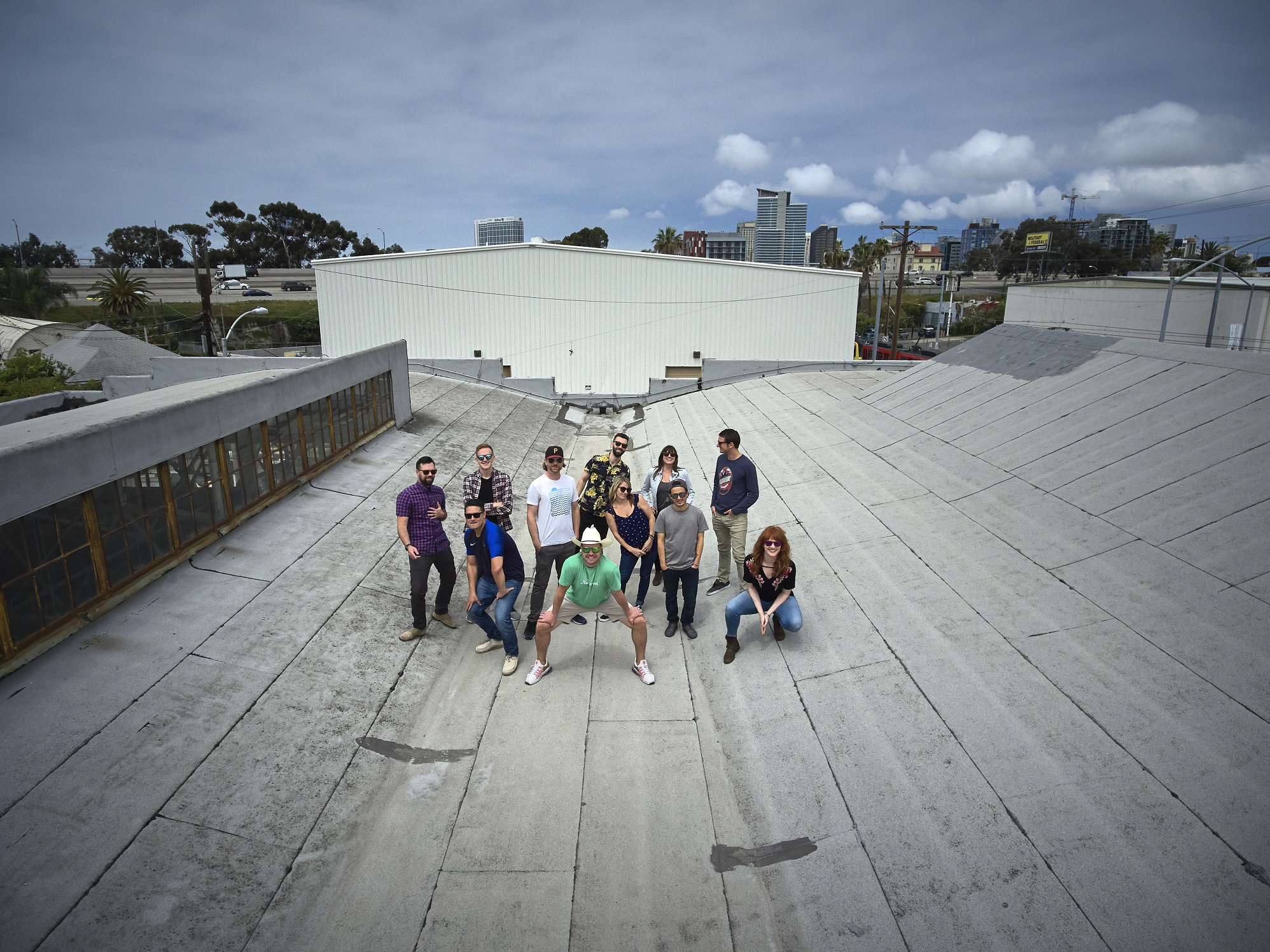