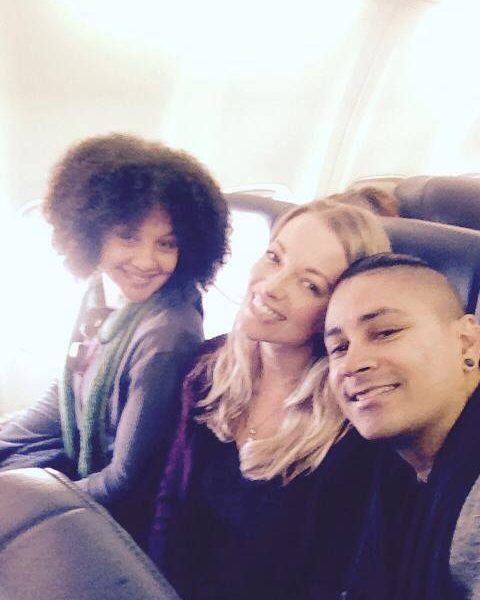 Today we’d like to introduce you to Angie and Victor Sagastume.

Angie and Victor, let’s start with your story. We’d love to hear how you got started and how the journey has been so far.
The vocal core of the group came together in a cover band from the mid-late 2000’s simply called “Crush”. I was a young original R&B artist at the time who wrote and produced original music with Victor Sagastume, our now musical director and keyboard player in Siren’s Crush.

Victor, who performed in bands at the time, felt I would do well performing at the nightclubs he worked regularly and he encouraged me to put together a band with a few professional musicians he knew from other acts around town. The idea was to form an edgy, live, three girl harmony-dance group (ala Destiny’s Child) who performed R&B and modern pop, the latter being something that was not common in the live cover band scene. At the time, most cover band’s main focus was performing disco and old school music.

Through the process of finding other vocalists, it wasn’t long before we found a young, up and coming “Soul Diva” now known as a staple around town named Rebecca Jade. Rebecca’s range, sultry vocals and friendly demeanor just clicked with the group and she began performing with us. Completing the group came the powerhouse Carissa Schroeder who really gave the trio it’s edge. There was just this chemistry that felt right between us and we complemented each other’s styles nicely. I was the Dance Pop/R&B side, Rebecca was the soulful R&B Diva, and Carissa was the Soulful, Bluesy, Rock Edge, and when our voices came together and harmonized, the blend was undeniable. I didn’t take long before we made a name for ourselves in the Gaslamp nightclubs and casino circuit.

Crush eventually shifted from the nightclub scene to the corporate environment and did well professionally but after a successful run, even though the musicians were top notch professionals, because of creative differences the band eventually dissolved. Victor and I wanted to continue to pursue our original concept and the search was on to put together an edgy lineup that could match the energy of the harmony vocal trio’s reputation. Victor, originally coming from heavier styles of music knew of other dynamic players who could bring that right balance of rock, edge and professionalism, and in late 2008 the auditions were on. Our taste in music has always ranged from Rock to R&B and we wanted to somehow incorporate all of that into what we do, so we didn’t rest until we found the right lineup and we did just that.

When we auditioned musicians, we had them audition with a variety of songs. We had them learn Metal, Old school, Pop and even Rap just to see if they could cover them all legitimately.

We wanted to it to sound like those styles and feel like a true original act performance, not just a cover of it. One of our philosophies, which we still enforce today is to hire musicians who can perform “off the page”. It’s become such an unfortunate stereotype to see cover/wedding bands with their eyes glued to a sheet of music or an iPad. You don’t see the Foo Fighters reading an iPad on stage, and you don’t see Britney Spears reading lyrics from a song book. Our clients pay you good money to see a performance which is the other half of the equation that many cover bands get wrong.

So as you can see, It took some time to find just the right players, but when we did, Siren’s Crush was born and, WOW! The energy and chemistry was incredible. Not only on stage, but it was infectious with our audience as well. We rehearsed, A LOT, which is another thing we are proud of. We don’t stop until our music arrangements are concert level and we consider ourselves a true unit. So many acts and agencies just bunch up musicians that meet each other for the first time literally on stage and that is a big no-no for us. It’s hard work but once you rehearse and arrange music, harmonies and dance moves, you feel like you have control of your show and there is this chemistry and confidence that is evident on stage. You’re not worried about reading the songs or messing up the arrangement and you can focus your energy on performing and owning your performances.

One of our first shows was actually a music competition at Viejas Casino, which REALLY whipped us into shape fast. Saul Ashley was our first drummer and he certainly stood out from the rest. His energy and passion, as well as attention to detail was absolutely incredible. Our guitar player Nik Mathews had these great chops, positive energy, strong work ethic and incredibly versatile talent. He has been with us ever since and is definitely the foundation of this band. Over time we have had a few musicians come and go but, we definitely take pride in having consistent band members. For the past few years we have featured Korey Kingston Horn and Tim “Figg” Newton on drums, Kevin Freeby on bass, and Tanya Mackenna on vocals, and they uphold the same talent, edge and values that we were always after.

I am the main contact when clients reach out to band and I typically do all of the booking. I also sing of course and work closely with the front lineup to ensure a polished show. Victor is our musical director and technical guy, as well as keyboard player. I would say that the most important characteristics that we look for in our members is: talent, strong work ethic and a positive attitude. We perform all over the country, from family friendly concerts in the park to crazy private events, opening for national acts in Dallas, Texas and Las Vegas, to extravagant weddings in Balboa Park. No matter what the event is, big or small, we give it our all ever time.

Occasionally, we are even hired to dress like the mythological “Siren”. Oh! A side note, Rebecca Jades husband, Rico Curtis, actually came up with the “Siren” idea for the name. You can read about Siren’s here: https://www.greekmythology.com/Myths/Creatures/Sirens/sirens.html

Overall, has it been relatively smooth? If not, what were some of the struggles along the way?
It has been a crazy-fun, yet sometimes bumpy road for sure. Maintaining quality control as well as the chemistry of the band can sometimes be a challenge, for example, the band members that we have, we value and hold on to, so when someone has to leave the band, it can be a difficult process to find someone to fill their shoes, someone who is up to our standards. Replacing a band member can take months! And we won’t just hop on stage with anyone. So things definitely have to be put on hold for awhile until we find just the right person. Not to mention, that individual also has to mesh with everyone personality wise. Also, wearing so many hats, and balancing so many things at one time can be a challenge for a small business. I sing in and manage and book the band, work with the clients prior to and day of the event. And with a full time job as well? Whew! It can be exhausting! I just recently started talking to a couple of potential assistants to help take the weight off us when working weddings and corporate events. Those types of events require attention to detail, non-stop attention, being in many places at one time, and thinking quick on your feet. It can be a challenge to wear so many different hats, and then jump right on the stage and also put on show. But! We are still working on things like that.

Alright – so let’s talk business. Tell us about Siren’s Crush – what should we know?
Siren’s Crush is a high energy, all live, Corporate Event Party Band specializing in Today’s dance music and performing a wide range of classic dance favorites, We perform hits by: Bruno Mars, Pharrell, Justin Timberlake, Rihanna and Katy Perry as well as old school favorites from Aretha Franklin, Stevie Wonder, Michael Jackson, Prince, Earth wind and Fire, and many more. We are available for corporate parties, weddings and festivals of any size.

We are known for our tight and dynamic concert level musicianship and high energy shows. We focus on our audience and our performance, and not on iPads or lyric sheets.

There have been a few really exciting highlights in our bands career. Including opening up for and meeting Grammy Award winning Artists: Boyz II Men, also performing at private events alongside Erykah Badu, Blues Traveler, Vanilla Ice, Lisa Lisa the cast of Dancing with the Stars, so you think you can Dance etc. To travel around the country and visit cities that you otherwise probably never would have, and have fun and get paid for it? It’s a pretty amazing gig. Also, I don’t think as a teen I ever thought I would have the opportunity to perform at The House of Blues, but I always thought that would be the ultimate experience for a singer or musician! So now, after so many years of performing at The House of Blues, and at so many of them all over the country, and being on their preferred vendor list, it feels really good. It’s a cool accomplishment, you know? Dreams can come true. ; )

Any shoutouts? Who else deserves credit in this story – who has played a meaningful role?
Our family and friends definitely deserve a shout out! They have been coming out to see us and to dance for years, whenever we get to perform at a public event. We also have some event planners and booking agents who come back to us and hire us year after year, and even challenge us at times, and that definitely keeps us motivated and on our toes. Every event is certainly a learning experience. Rico, Sandy, Bryan, Annette, Alicia, my parents, Victors family, our band mates’ families and friends, the list goes on and on. There are a lot of people who keep us going, cheer us on and who are the backbone of our events. We don’t take them for granted. Their support means So much to us! 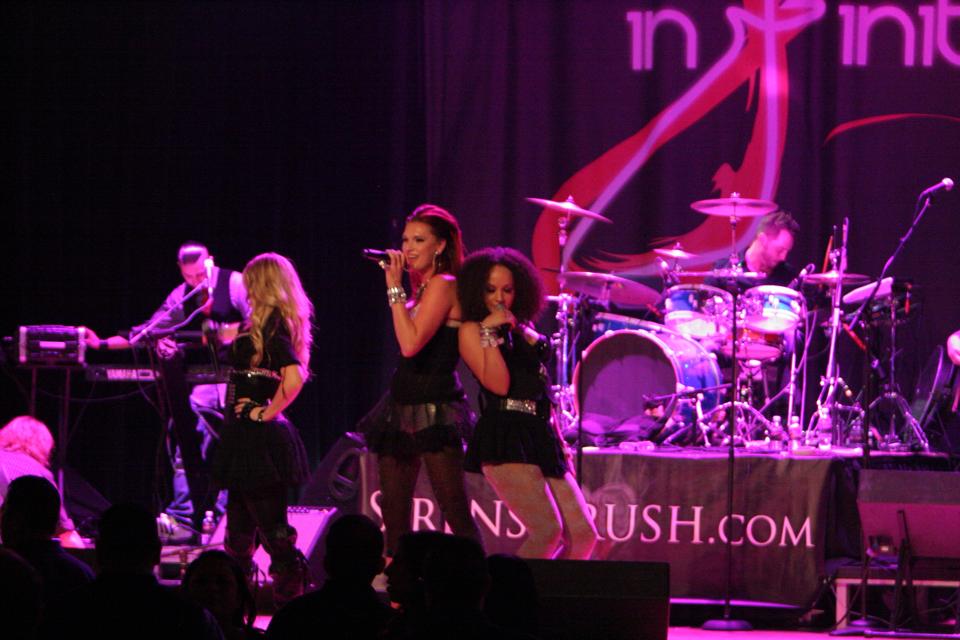