Meet Ashley Jennett of The Bee & The Fox 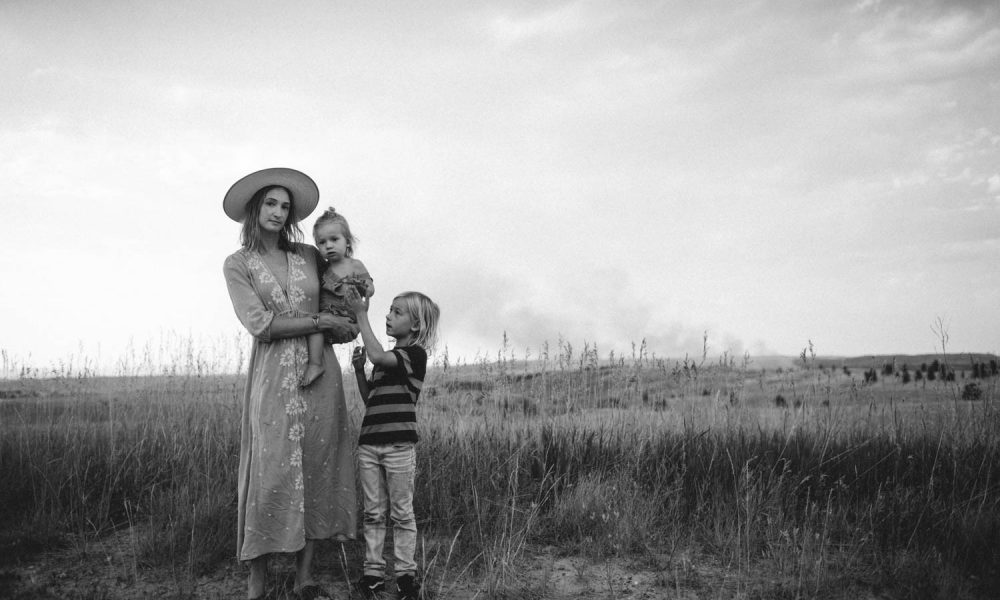 Today we’d like to introduce you to Ashley Jennett.

Hi Ashley, can you start by introducing yourself? We’d love to learn more about how you got to where you are today?
We’ve long since used fashion to identify who we are; early tribes used tattoos, body markings, and dance to distinguish identifying characteristics among individuals within the same tribe. Today, we largely rely on fashion; we choose what we wear because we like the message it conveys about us. Fashion, in this sense, is an extension of our identity; a way of connecting with others. A way of classifying us as belonging to a certain group, or team. We make a conscious decision about what to wear each day and we communicate with the world around us via that selection.

Most of us have an early memory surrounding a t-shirt; that souvenir shirt you pined for on a family vacation, that obnoxious holiday sweater your grandma bought you that smelled like mothballs, that shirt you bought at your first concert, that shirt your mom insisted you wear, the oversized tee of a lover you spent Saturday mornings sipping coffee in, that shirt that’s been in your drawer so long it’s now perfectly tattered, an oldie but goody.

I was a college student in San Francisco and I explored the city much like a tourist would. I can still envision the little souvenir shop I bought the first piece of clothing for my not-yet conceived child. It had a trolly on it, navy banding around the neck and arms, and the most classic script that read ‘San Francisco’. All three of my sons have worn it, all these years later. It hung out in my closet while I traveled the world, moved cities, got married, moved cities again, until I had my first son – nearly six years after buying it in that little souvenir shop.

I remember getting a bloody nose in elementary school and looking down at my hyper color shirt, wondering if the blood would cause it to turn a different color. I remember getting lost in a shopping mall, searching for my dad not by face but by the ‘I’m the boss’ shirt he had on that day.

Here at The Bee & The Fox, we hope to pay homage to the legacy of t-shirts; to tap into the nostalgia that has been around long before us. And for you to make your own memories, in our designs, is nothing short of a dream.

I had freshly moved to the sleepy beachside town of San Clemente from the gritty San Fernando Valley and I was working as a registered nurse at a hospital nearly 100 miles away. I was a year into recovery from having 13 levels of my spine fused when a car struck me on the freeway, totaling my car and causing my life to flash before my eyes. My oldest son was 3, my youngest just a year and a half behind him. In hindsight, you could say The Bee & The Fox was born out of the fresh scenery that comes with moving to a brand-new town, a well-shaped perspective having spent weeks in the hospital and months in bed building back strength and really just wanting to be able to do the mundane things I now complain about having to do (but also recognize are a privilege to be able to do); like to make dinner and put in a load of laundry. There was that restlessness in the air that comes from clean slates and new beginnings. And when I grew tired of not finding the kinds of tees that I wanted to put my boys in, I called Janet.

Janet was living in Utah at the time, balancing motherhood with freelance design work. This story would lack meaning and truth if I didn’t take a moment to lay out all that Janet is. My longtime road dog, my ride-or-die. My fellow world traveler. My friend cried when I ran onto the highway to photograph a truck driving by and the mere thought of me being struck by said truck brought her to tears. Though, it’s fair to say she always worries. I practically have to convince her that her shoes are on even when she can look down and see them. I can recall one fight in all our years of friendship and it was on a 24-hour bus ride, from India to Pakistan, in 2006 when there was civil unrest and machine guns being pointed at us at the check stops along the way. Never mind that the bus was so rickety that if you had loose teeth, chances are you’d lose them. It was hotter than hell, with windows down and dust blowing in; the smell of the chicken and goat droppings still lingering. And I don’t even remember what the fight was about. I only remember that we were tired, dirty, hungry, scared, and together. She now lives and works in Seattle, is a mother to three (including a set of twins) but remains my right-hand woman.

We came up with our first 4 initial designs; they were simple and clean and without much (read: any) forethought, I opened up an Etsy shop. I knew nothing. I still feel like I know nothing. For far too long, I would handwrite addresses on packages, take the orders down to the post office, and ship them one at a time. I got to know the kind folks at my local post office quite well. It wasn’t until relatively recently that I took the plunge and moved the business out of my garage. And my the garage, I really mean the whole house because just about every room seemed to fulfill a purpose.

I didn’t start this endeavor with any sort of aspirations for it to be anything other than well-construed, meaningful designs for our own kids. And, of course, others who felt, like we did, that there was not enough importance and love put into designs that were currently on the market.

It took some time and a lot of sweat and even some tears but today we’re happy to have full control over our production. So, you can feel as good as the fabric that covers you. And so can we.

The Bee & The Fox was built from a love for design and that love remains one of our core values, along with authenticity and empowerment.

Our growth has given rise to our voice, which is not something we saw coming but are forever grateful for. We still recall the early days when we would post images to Instagram of empowered mamas breastfeeding their babies and we watched in surprise how each time we would lose followers. It was a pattern that became evident through repetition and it allowed us to take the stand that we are a brand that not only supports breastfeeding but also believes in doing so in public. That we don’t agree with the sexualization society has placed on our breasts. And that if someone feels one should cover-up, then keep the nipple out and throw a blanket over their face instead. Sometimes you have to draw a hard line in the sand and we’re a company that’s okay doing that.

We continue to use our voice to support women; mothers, sisters, and daughters alike. Because we feel it’s our duty to do so with the platform we have.

It’s an honor to regularly donate to the American Association of University Women (AAUW) which has been supporting the plight of women for over a century. We also continue to use our voice to support victims of natural disasters (all proceeds from our ‘Don’t Mess with Texas’ tee were donated to the victims of the hurricanes in Texas, Florida, and Puerto Rico) as well as victims of injustice (we were able to raise over 11K to donate to raices in support of reuniting` immigrant children with their families).

There is humility in admitting that you don’t know what you don’t know. Making changes as we go is much the same as trying to change the tires on a moving bus. We’ve learned a lot along the way and have made changes accordingly; because we believe that when you know better, you do better. We’ll continue to make changes. There is so much good and beauty in evolution.

“If you think your first draft is fine and doesn’t need any changes, just remember: this is what Mickey Mouse looked like when Disneyland first opened.”   —Matt Tavares

Can you talk to us a bit about the challenges and lessons you’ve learned along the way? Looking back would you say it’s been easy or smooth in retrospect?
The road has never been straight; there’s been endless bumps and detours along the way that still persist to this day. As soon as one issue is sorted, a new one arises. I’ve had to learn, sometimes against my will, to accept this as part of running a business. My goal now is not for the road to always be smooth but to have the confidence that I can push through the bumps and detours.

Alright, so let’s switch gears a bit and talk business. What should we know?
We are known mostly for our graphic tees, centered around motherhood, sisterhood, social justice, and beyond. We donate regularly to organizations and causes that match our mission. Using our voice and taking action is what I’m most proud of.

Is there any advice you’d like to share with our readers who might just be starting out?
In the words of Joan Rivers, it doesn’t get better, you get better. I still need this reminder. 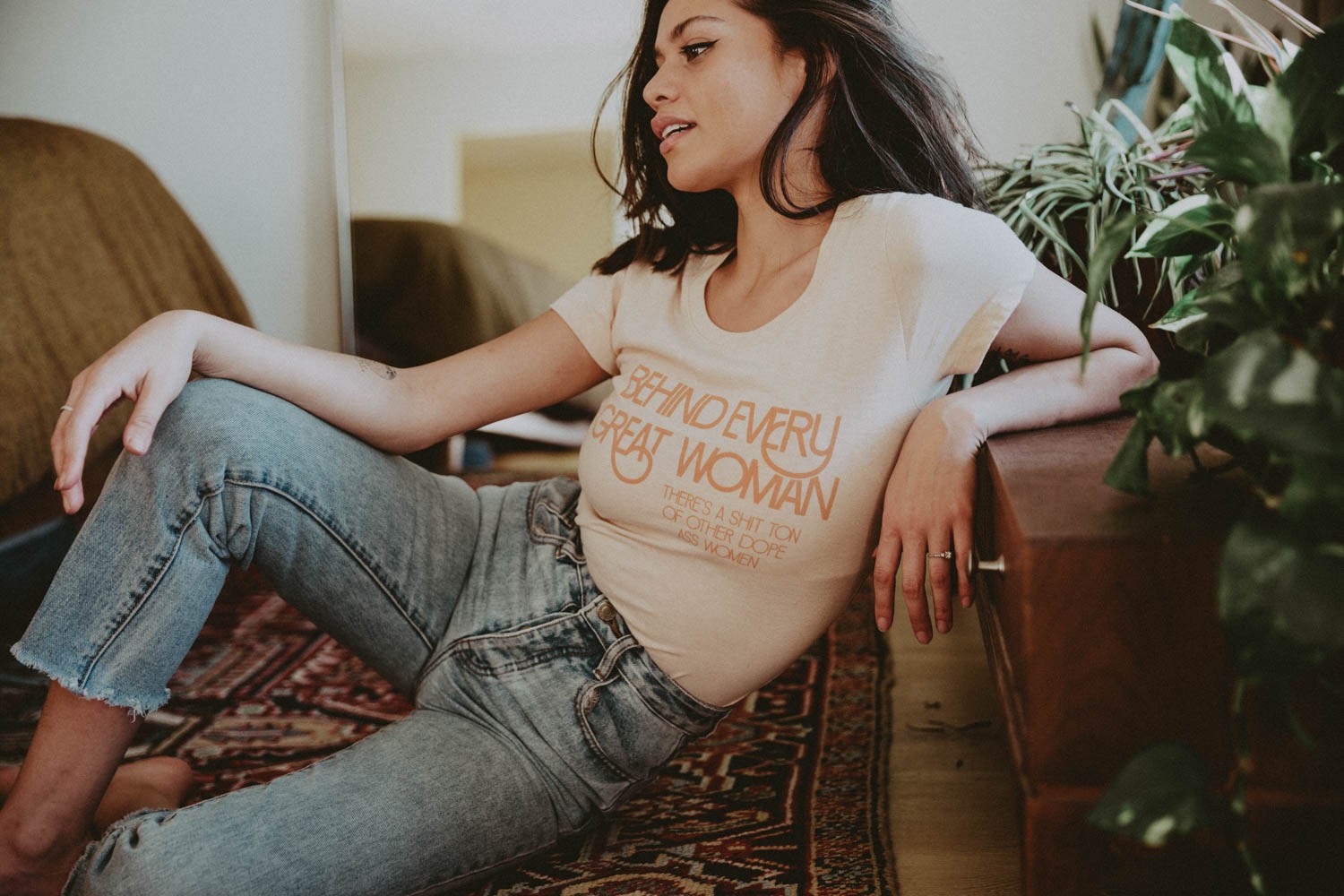 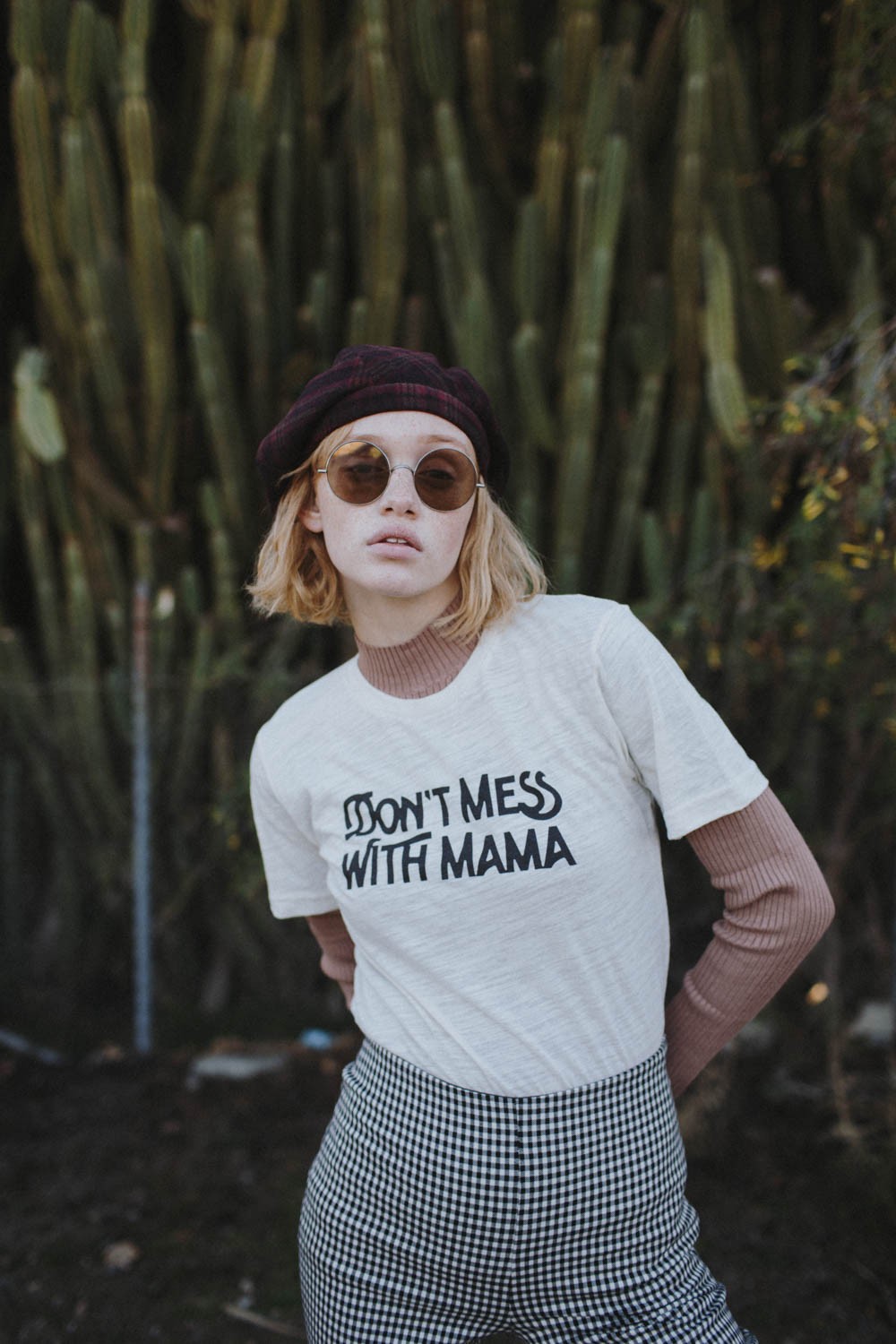 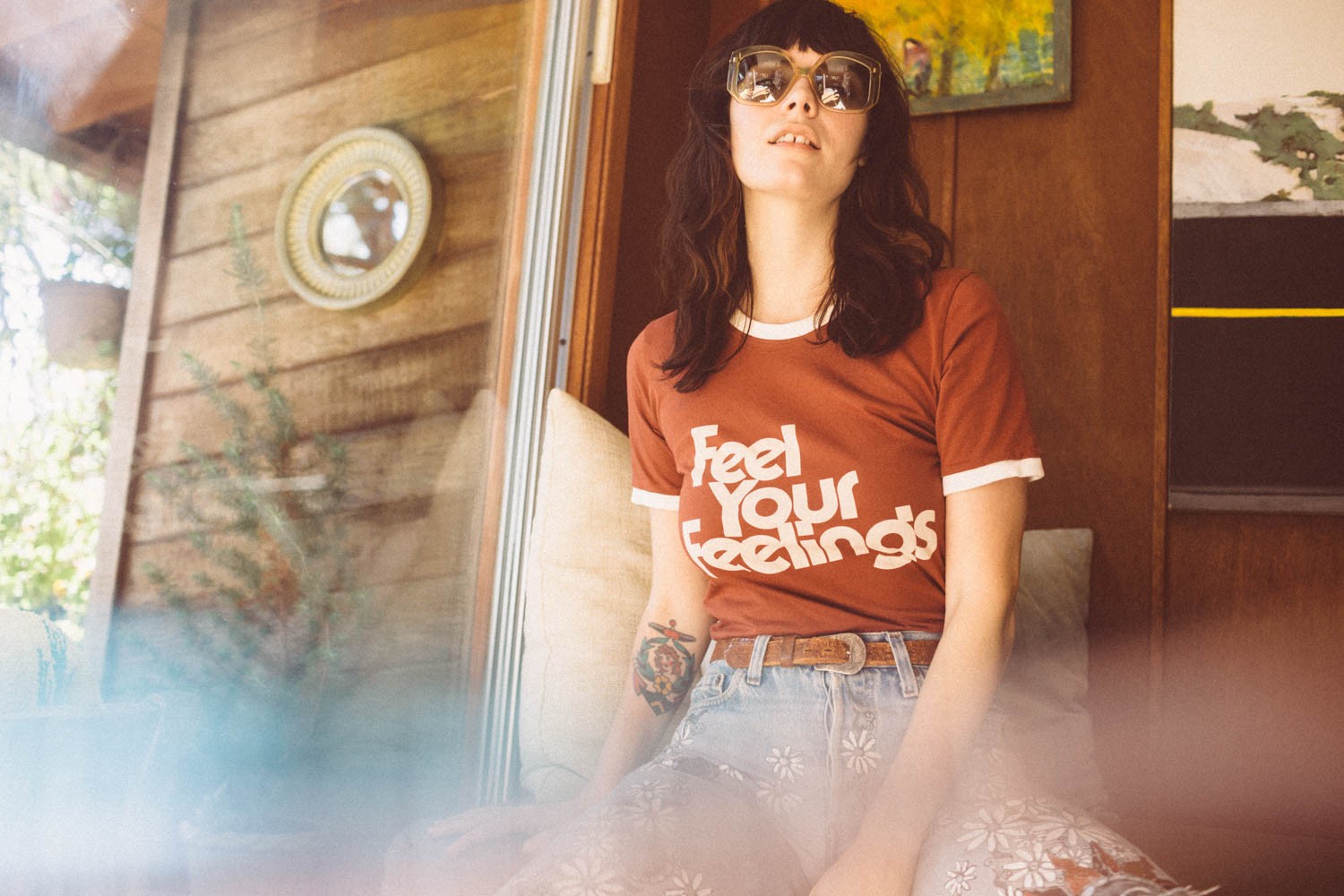 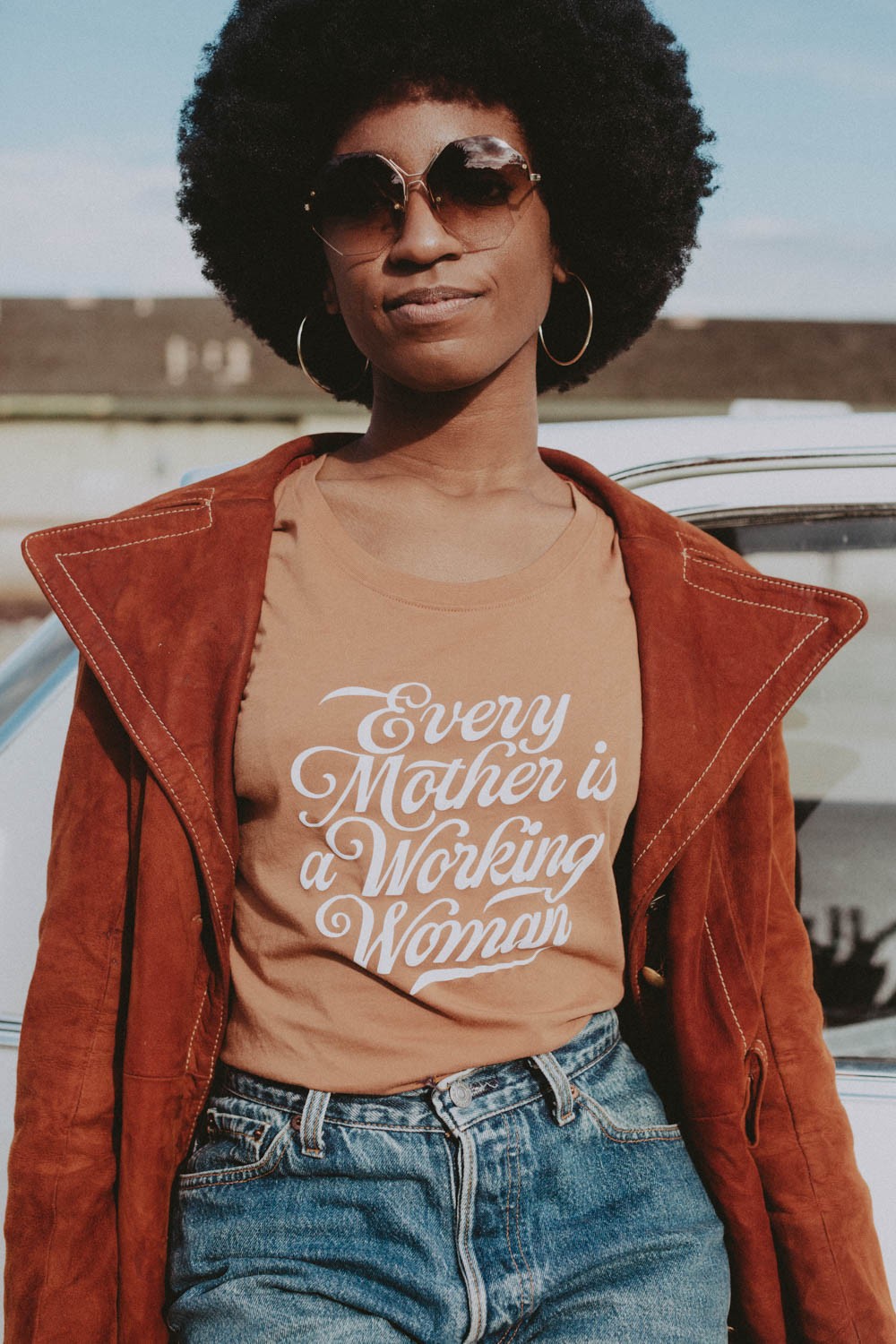