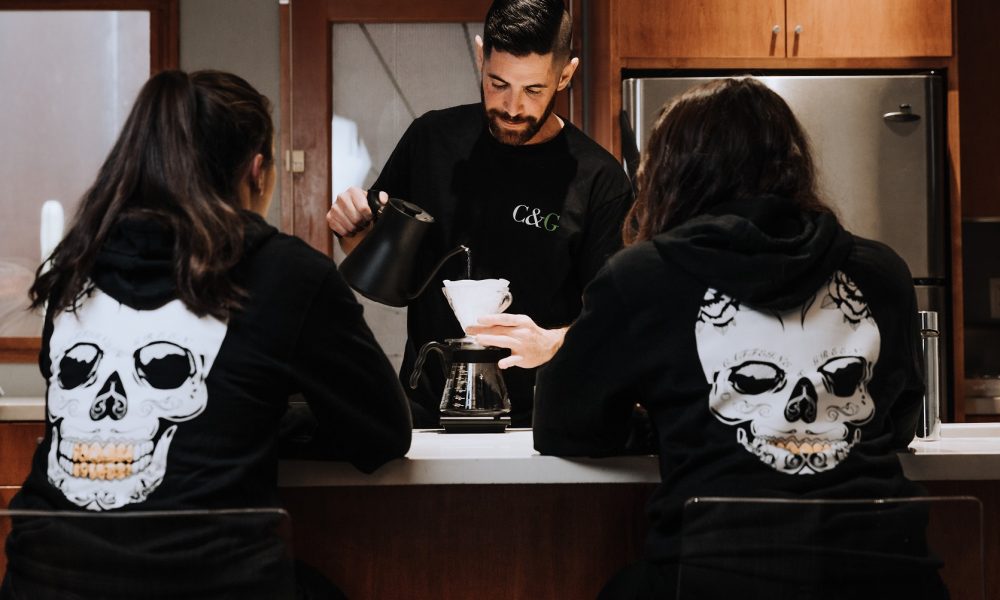 Today we’d like to introduce you to Cano Cardenas.

Hi Cano, we’re thrilled to have a chance to learn your story today. So, before we get into specifics, maybe you can briefly walk us through how you got to where you are today?
I started in coffee a little over 5 years ago, washing dishes at Zumbar Coffee & Tea. I made the transition from a salaried job to working three jobs at some pretty low hourly wages. I worked 7 days a week for a little over a year just to pursue my dream of becoming a coffee roaster and eventually open my own coffee roasting company. Some people say, they didn’t plan where they are today, I’m not that person. I was very calculated in pursuit of my goal. I pestered Steve Rayle, the owner of Zumbar, every time I saw him. “Hey Steve, need a roaster yet?”, after 4 months of this, I was washing dishes, and he asked to talk to me outside. He then asked, did I still want to roast? Of course I said yes, he then told me that I would start working at the Sorrento Valley location where the roaster was and start working in production. I was not allowed to touch the roaster yet, just shadow for a couple months. I watched, I listened, I got so confused, but I was extremely hungry to learn. Being a skateboarder, I was determined to learn and understand the coffee roasting process, just like I Learned how to skateboard. It was not without its frustrations, and setbacks, but it lead to so many wonderful things, I would never change a thing.

It was at that first day of working in production where I met my friend Shea Cooper. He has become one of the most influential people in my life over the last 5.5 years, it’s really kinda crazy. In the best way possible. I mention Shea because not only did we work together in production everyday for about 3 years, it was him who introduced me to podcasts, more specifically the Joe Rogan podcast. I was so tired of listening to music day in and day out, he told me about the show, and to listen. I was hooked immediately. Scientists, pro fighters, celebrities, authors, like what? I looked at Shea one day and said, “Dude, Joe says this is so easy to do, we both know enough pro skateboarders, I think we should do this!” I was wrong, it was super hard haha. I taught myself over the next six months basic audio engineering, studied mid-level audio equipment, purchased it, came up with a name, a concept, and hit the ground running. My first guest, Shea Cooper of course! He came over and I was having a low key panic attack, because of course everything was not working. I called apple support to walk me through the process. He waited patiently, we laughed, then we did the first episode of what would become the Caffeine & GREEN podcast.

It was roughly 8 months before I actually released the podcast. It was going to be called the Hussle & Motivate podcast, named after my favorite song by one of my favorite rappers, Nipsey Hussle. As it took so long for me to really understand the podcast world, the name actually was taken by the time I was ready to launch. By this point, I had left Zumbar to take a Head Roaster position for a cold brew coffee brand that has since gone out of business. It was probably the worst experience I have had to date working in coffee. It was corporate, and they did not care about the craft one bit. At the same time, it was through my unhappiness of my position that I came up with the name Caffeine & GREEN at my desk one day. Caffeine is my hustle, and green is the money to my hustle. Money is now blue, and people consistently think it means marijuana. It does not. The name is still an ode to Nipsey and that Hussle & Motivate song. The Marathon continues is what the late rapper always said, “Get on your marathon till you bruise your feet, or run the streets till the reverend write your eulogy” That is what I’m about. So with the podcast, I don’t care if you are a coffee professional, rapper, reggae band, business owner, MMA fighter, whatever, if you have a hustle, you are motivated, and you have a passion. I want to hear it. Come through let’s chat.

I left that job, and moved over to a cafe that helped me find my voice and creativity in coffee roasting. Having full control over menu development and coffee profiles, it was such a blessing. I helped this shop grow their first location and just three months later, open there second location in Orange county. Although, things with this roaster didn’t work out, I will say it gave me the confidence to trust my skills, and grow. It also introduced to me some amazing new people that would again help me grow. I do not claim or believe that I have done all of these things because I am the best roaster in the world, no. You are only as good as the team that surrounds you. Liav Cloughley and Josh Sitton were those people. Liav told me one day that all my coffee’s tasted the same and needed to do something different. Although I was not stoked on this comment, I understood and we then started to roast more complex coffee’s and as described started to grow. Liav, like Shea, has become a huge influence on me over the last 2.5 years. It was not just coffee, we helped each other train for my marathon, her coast guard training & law enforcement training, we helped each other a lot. It was also because of her that I started to train jiu-jitsu, and muay thai.

Over the course of Covid, I began to train with Coach Jhanex Alviz and his team, Team Parusa. It was a life saver, real talk. Had I not had them, Liav, and my homie Ray Ray. I don’t know what I would have done. I was going through a very dark time in my life as I experienced the loss of a 9.5 year relationship. To make matters worse, July 8th I was fired from the roaster that I helped build. I wasted no time, I called Shea, before I even left the parking lot from being let go. He had since opened up his own coffee shop in Oceanside, CA called Steel Mill coffee with his friends, Riley Hawk, and Chris Balingit. I was in disbelief how things unfolded with those shop owners to say it mildly, but in hindsight their mistake was the best thing that ever happened to me. The Caffeine & GREEN podcast became Caffeine & GREEN LLC on July 20th. I went all in, I took the money I was saving for a house with my ex and started my roasting business.

Like the podcast, Caffeine & GREEN roasting would be about what I love in all aspects. Craft coffee, hip-hop, skateboarding, and of course fighting. I hit up my homies and everyone was more than down to be a part of the launch. I spent the next 2.5 months filming, training, roasting for myself and Steel Mill, and sponsoring a pro fighter Tyler Schaefer. It has been a whirlwind, and sure it’s hard and very stressful running my own business, and working for Steel Mill at the same time but, I wouldn’t have it any other way. A year later, I now have a fight team of sponsored fighter’s including Liav, and my boy David Grostic. Between Steel Mill and Caffeine & GREEN, we have 9 sku’s in grocery stores (Valley Farms market Spring Valley & La Jolla). I have also branched off into doing private label for companies that just want their logos on my coffee, it’s so amazing to walk into a grocery store and see my coffee, or just see people drinking it in Oceanside, or at Caffeine & GREEN pop-ups. I am so thankful for everything, I am thankful for the horrible things, good things, and all the people that have believed and supported me through all of this. Thank you so much with everything I am, I am only as strong as the people I have surrounded myself with, and let me tell you, they winning too! We up now! Much love!

Alright, so let’s dig a little deeper into the story – has it been an easy path overall and if not, what were the challenges you’ve had to overcome?
It has been more than a struggle, it’s been a hustle. My first year in Coffee I worked 3 jobs to get by. I worked for a spin cycle studio in Solana beach. I was also a meditation teacher and front desk agent at the Chopra center in Carlsbad, all the while working at Zumbar Coffee & Tea Cardiff location, until they moved me over to Sorrento Valley. I then bought a Prius, and drove uber/lyft after a year of three jobs and went down to 2 jobs. Starting in 2017, my day would start at 4am six days a week. I would drive from 4;30-7am, Zumbar from 7am-3:30 or 4pm, then drive till 5pm or 6pm depending on how much money I earned. Then home to train for whatever marathon I was training for at the time. This was my life until mid-2019. In between all this, I started the podcast, which now has a 127 episodes in less than three years. Now, I just hustle Caffeine & GREEN, Roast, Barista, and do whatever is needed for Steel Mill, do the podcast, film and edit all the content for Caffeine & GREEN, and train 5 days a week.

Can you tell our readers more about what you do and what you think sets you apart from others?
I am Coffee roaster by trade. Self-taught audio engineer and podcaster for the last three years. I also film and edit all content creation for my Coffee roasting business, Caffeine & GREEN. I am also the head roaster for Steel Mill coffee in Oceanside, CA. I am most proud of my brand Caffeine & GREEN. I grew my business out of my podcast. I am also very proud to be producing coffee for some very close friends of mine at Steel Mill. I will never work for anyone else other myself, the only exception to this statement is of course for Steel Mill. Shea Cooper, Chris Balingit, Riley Hawk, Ana Fletcher, and Sam Giles are all my friends and the amazing team I have at Steel Mill, and I am loyal to the people who support me. When they wanted to roast, it was only natural that I come on board. I am also very proud of my fight team for Caffeine & GREEN. I have seen all my fighters grow tremendously, and win muay Thai, mma, and jiu jitsu tournaments and matches. Shout out to my team (Tyler Schaefer, Liav Cloughley, and David Grostic).

What quality or characteristic do you feel is most important to your success?
Dedication, Determination, Grit, Hustle, Love, Loyalty, Grind, never being satisfied with mediocrity. Being the best and surrounding yourself with quality people not quantity. 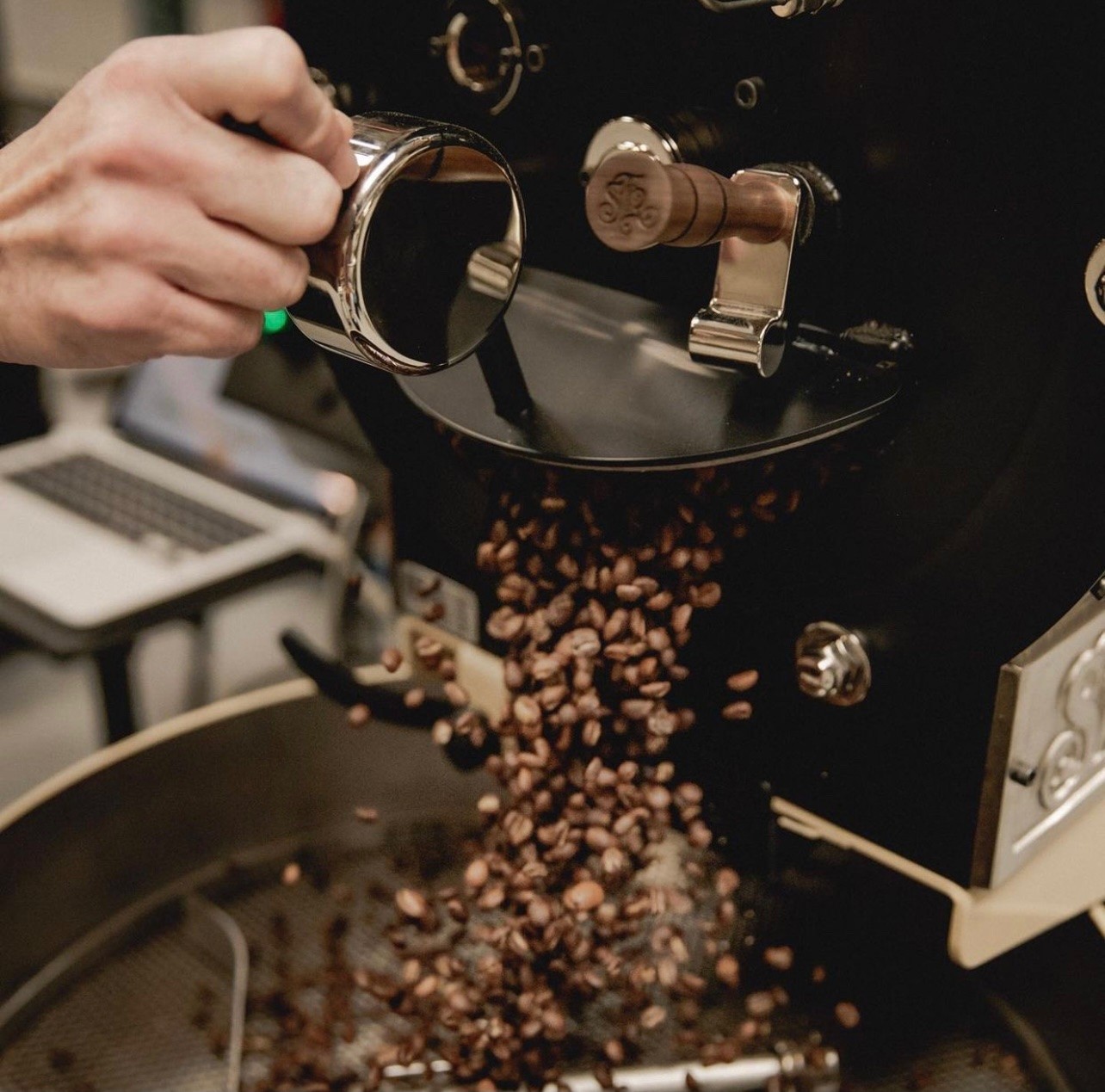 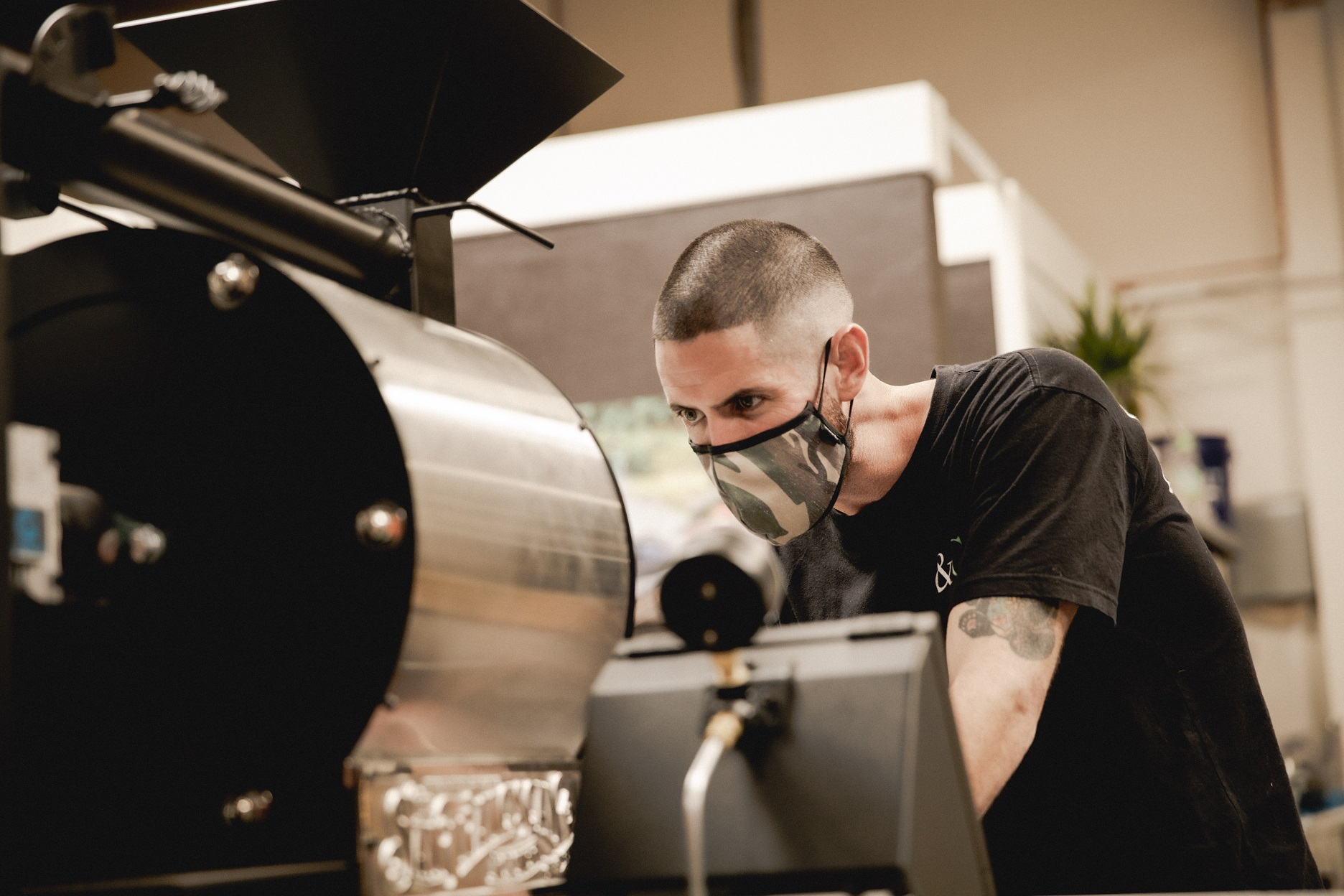 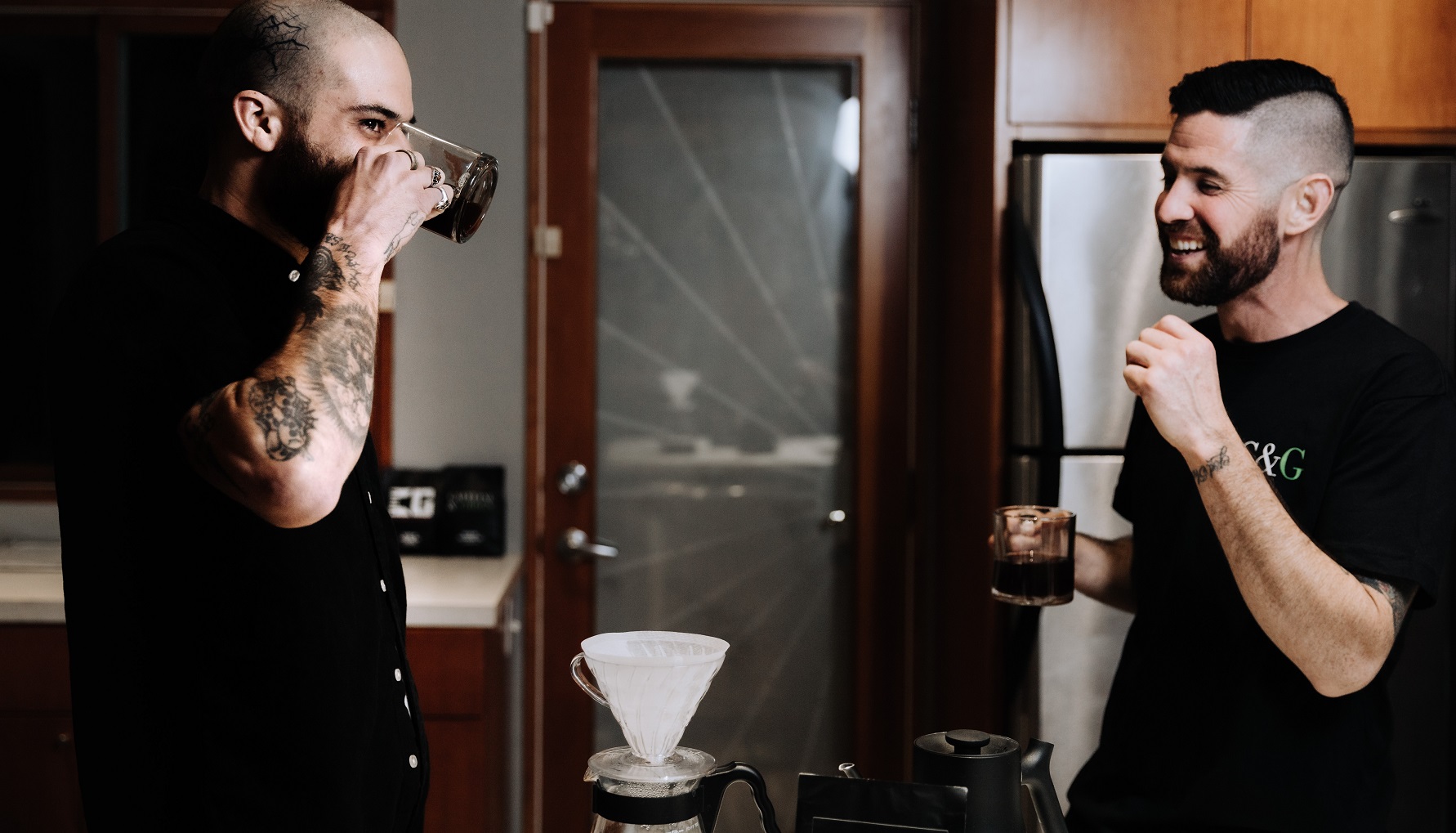 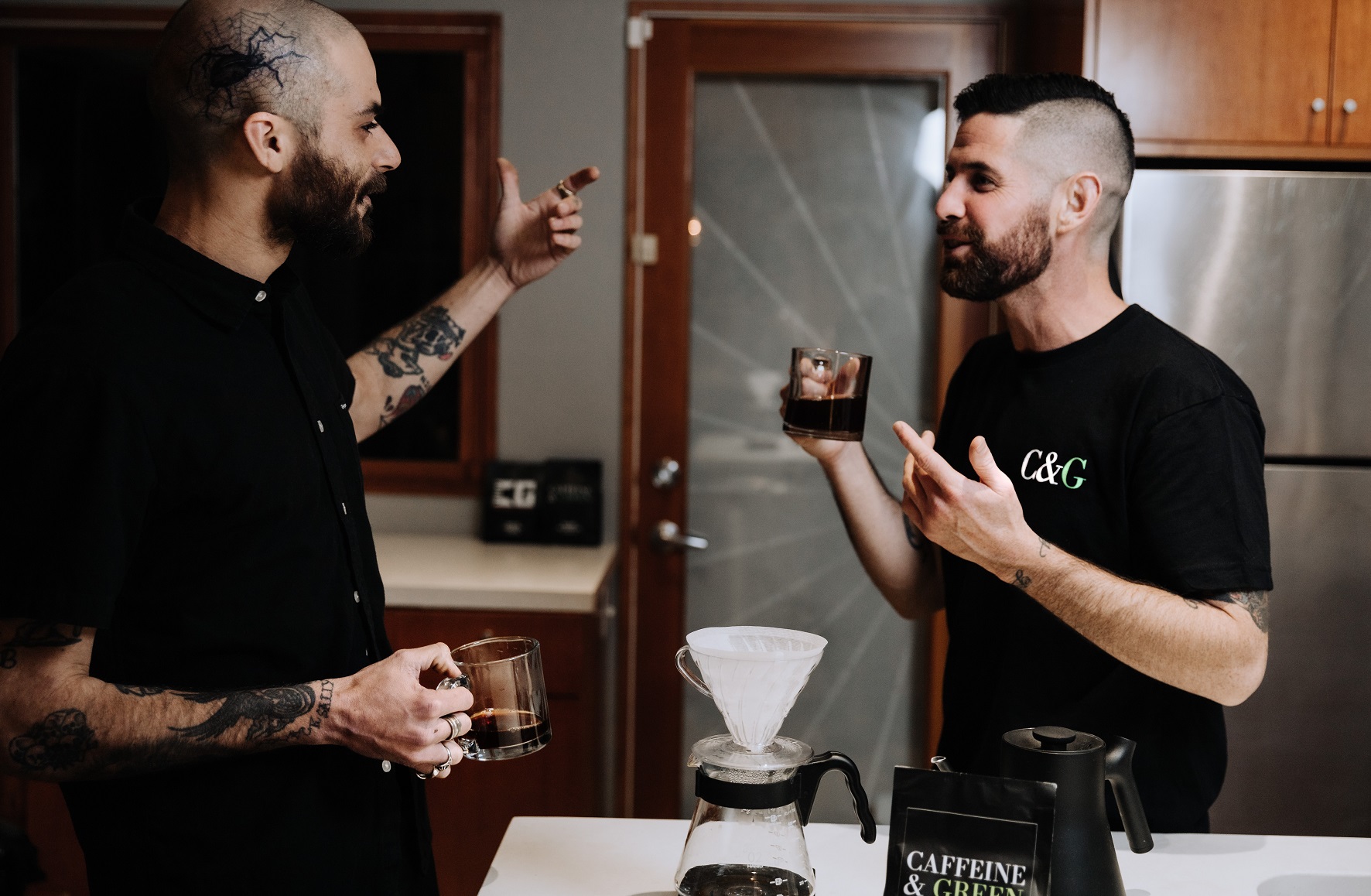 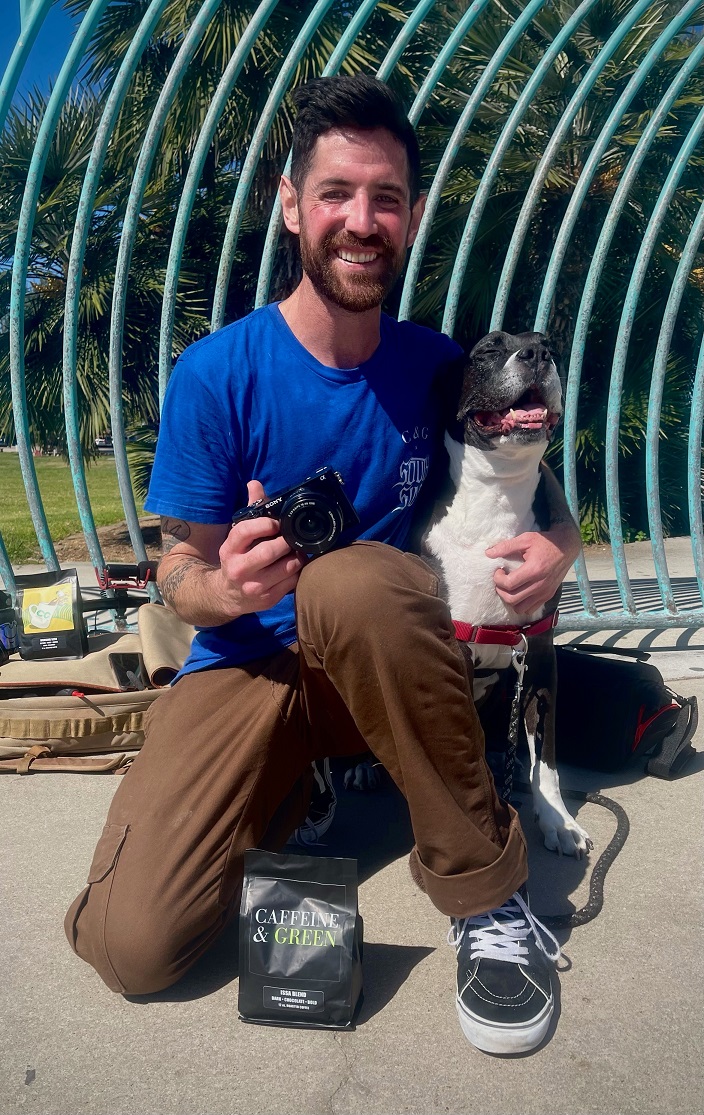 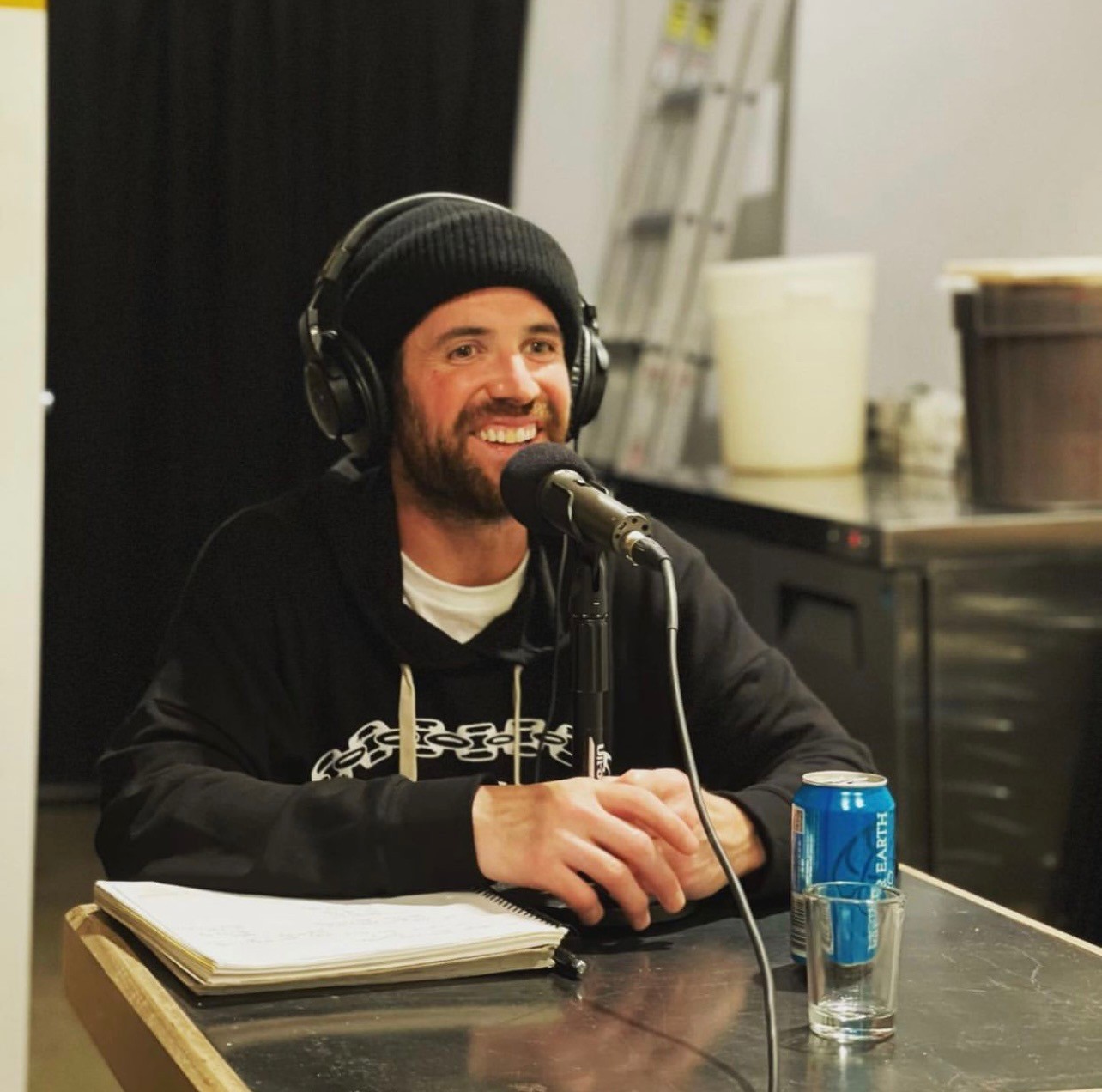 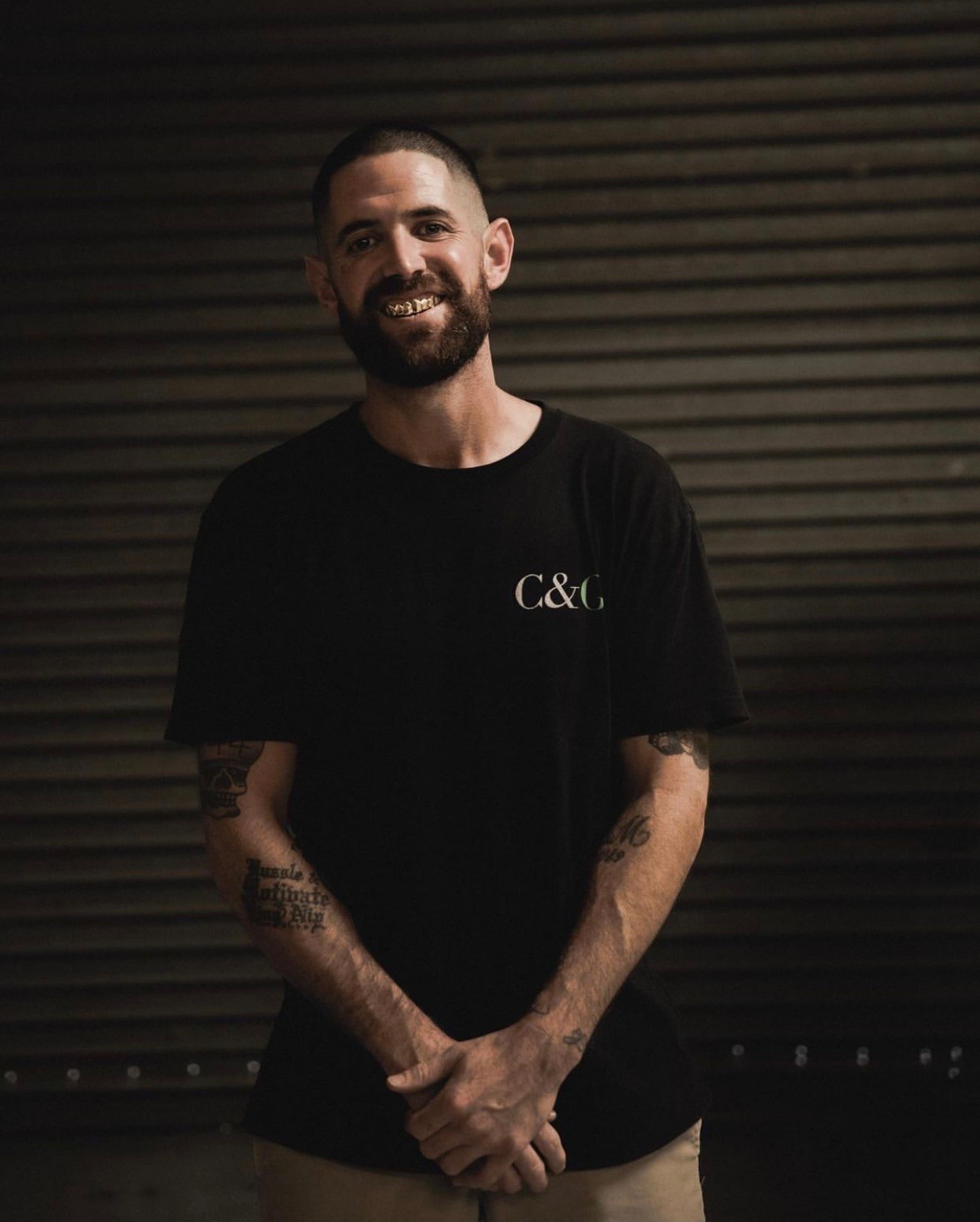 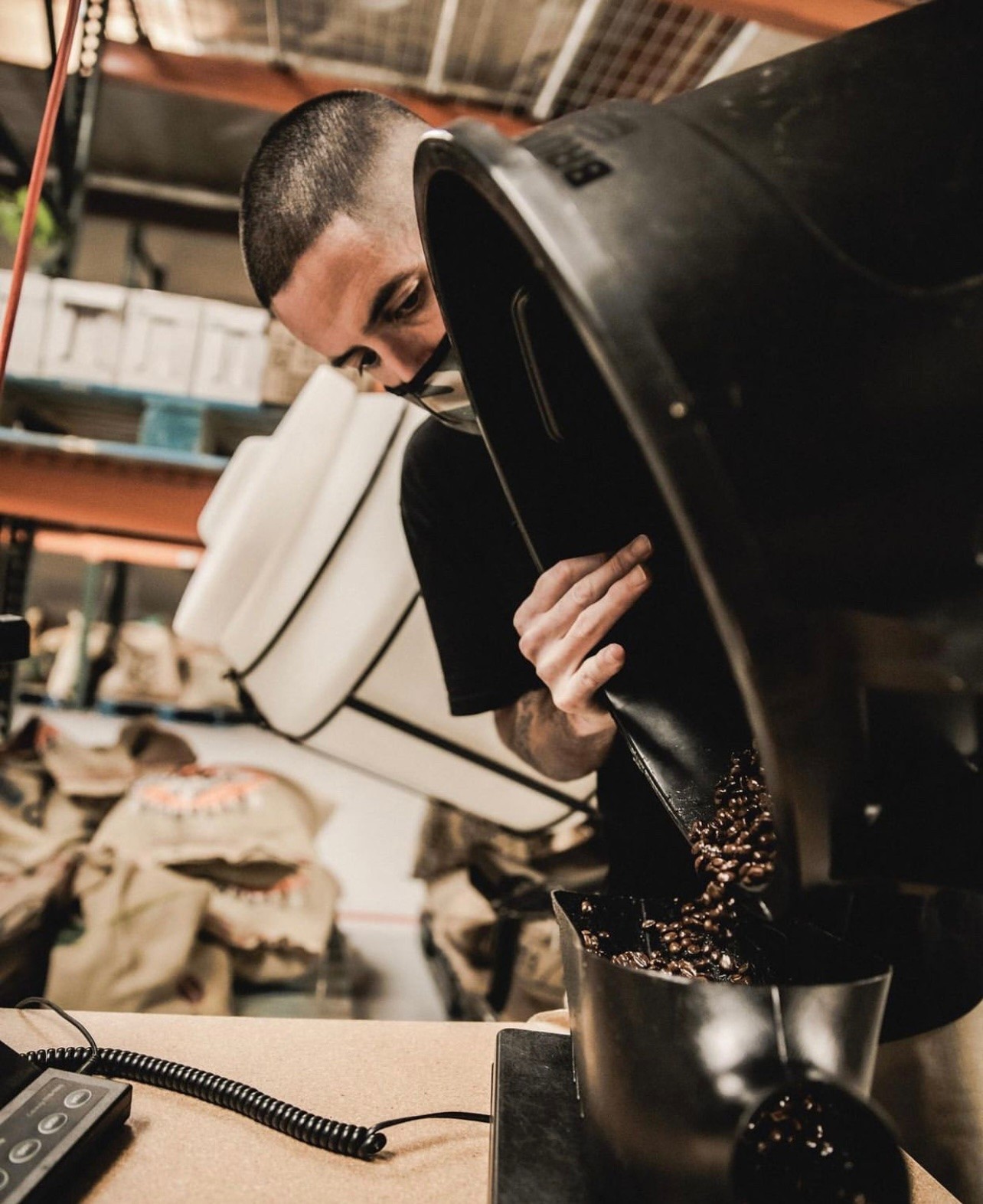 Image Credits:
All Photos (Except for picture with Cannibal – Dog) shot by: Laura Arango @alma.photography.studio