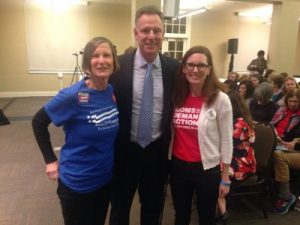 Today we’d like to introduce you to Carol Landale and Ron Marcus.

Carol and Ron, please share your story with us. How did you get to where you are today?
I retired from teaching shortly after the massacre of 20 and 7 educators at Sandy Hook Elementary School. During my 25 years of teaching, we had had the occasional lockdown drill but there was little concern that they were really needed. Fear of an active shooter on campus was not on the minds of my students. How things have changed.

Today I hear stories from my friends with school age children that these drills are taken with increasing seriousness. Today, we average one school shooting incident a week – and children are being traumatized. I joined the Brady Campaign to Prevent Gun Violence after I retired and in the past six years I have witnessed not only the increase in gun violence but also an increase in concern about what to do about it. Our organization has grown from about 7 dedicated members to 30 +, with a social media outreach of over 1500.

As a teacher gun violence touching our campus had always been in the back of my mind, but I can’t imagine what it must be like for teachers today. And for students. When a child says she wasn’t surprised that a shooting happened at her school there’s something wrong with the way we address the problem of gun violence. For 4 years our organization has plugged along calling on Congress for background checks and changing state laws little by little, but nothing comprehensive has happened at the national level and indeed, many states have weakened their laws.

For 4 years people have expressed concern and temporary outrage at every mass shooting, but since the Parkland shooting, there’s been a change and an increasingly loud call to our legislators to act. They ignore the call and under the current administration, I believe there will be no legislative change to keep our children and communities safe.

This is why I do this work. I have faith in the generation that will end gun violence, and I will do all I can to support them. No developed nation in the world suffers from gun violence the way we do in the United States. Parents do not have to wonder if their children will come home from school at the end of the day, children do not have to “expect” an incident of gun violence at their schools.

Our organization works with legislators to change the gun laws, with educators on ways to improve school safety, and with the public to inform them of what they can do to change the toll of an average of 102 daily gun deaths.

Overall, has it been relatively smooth? If not, what were some of the struggles along the way?
Changing a country of 300 million is not easy. The US has a strong gun culture and there is much resistance to change. The difficulty lies in creating a culture where responsible gun owners can keep their weapons while ensuring that weapons are kept out of the hands of criminals and children. Seven children, on average, die every day from guns, the majority owned by parents who keep their guns loaded, unlocked and in easy reach of curious children.

Seventeen states hold parents criminally liable if their child does harm with a gun. This needs to be a federal law. One of the easiest ‘no-brainer’ laws is background checks on all gun sales, internet, private and at gun shows. Nineteen states have expanded background checks to all sales. This also needs to be a federal law. The assault weapons ban, in effect from 1994 – 2004 needs to be reinstated. The majority of all the recent mass shootings were accomplished with semi-automatic firearms.

Laws that appear to be common sense to those in the gun-violence prevention movement, appear threatening to those who believe they infringe on their 2nd amendment rights. It’s a struggle to convince gun owners that this is not the case. The gun lobby and the NRA uses fear as a tactic to promote more gun sales, The United State already owns more guns per capita than any other country in the world.

In fact, a recent estimate showed that of the 800 million guns in the world, half reside in the US. This makes for a very rocky road to get to a place where gun owners can feel secure and the rest of the population can feel safe.

Please tell us about Brady Campaign to Prevent Gun Violence.
We specialize in awareness! Until people are aware of the problems caused by guns getting into the hands of dangerous people, they cannot do anything about it. Brady Campaign has been doing this for decades. Brady and Moms in San Diego and our San Diego partners have been at it for just under a year. We are unique in that we are the boots on the ground for our two national organizations. We get out the word through tables at community events, talking to legislators, presenting to school and community groups.

If you had to go back in time and start over, would you have done anything differently?
Growing is never easy, but with the various ups and downs of reaching the outreach that we have today, I don’t see any place I would have done things differently. As a volunteer organization it’s important that volunteers remain dedicated, feel useful and don’t get burned out. 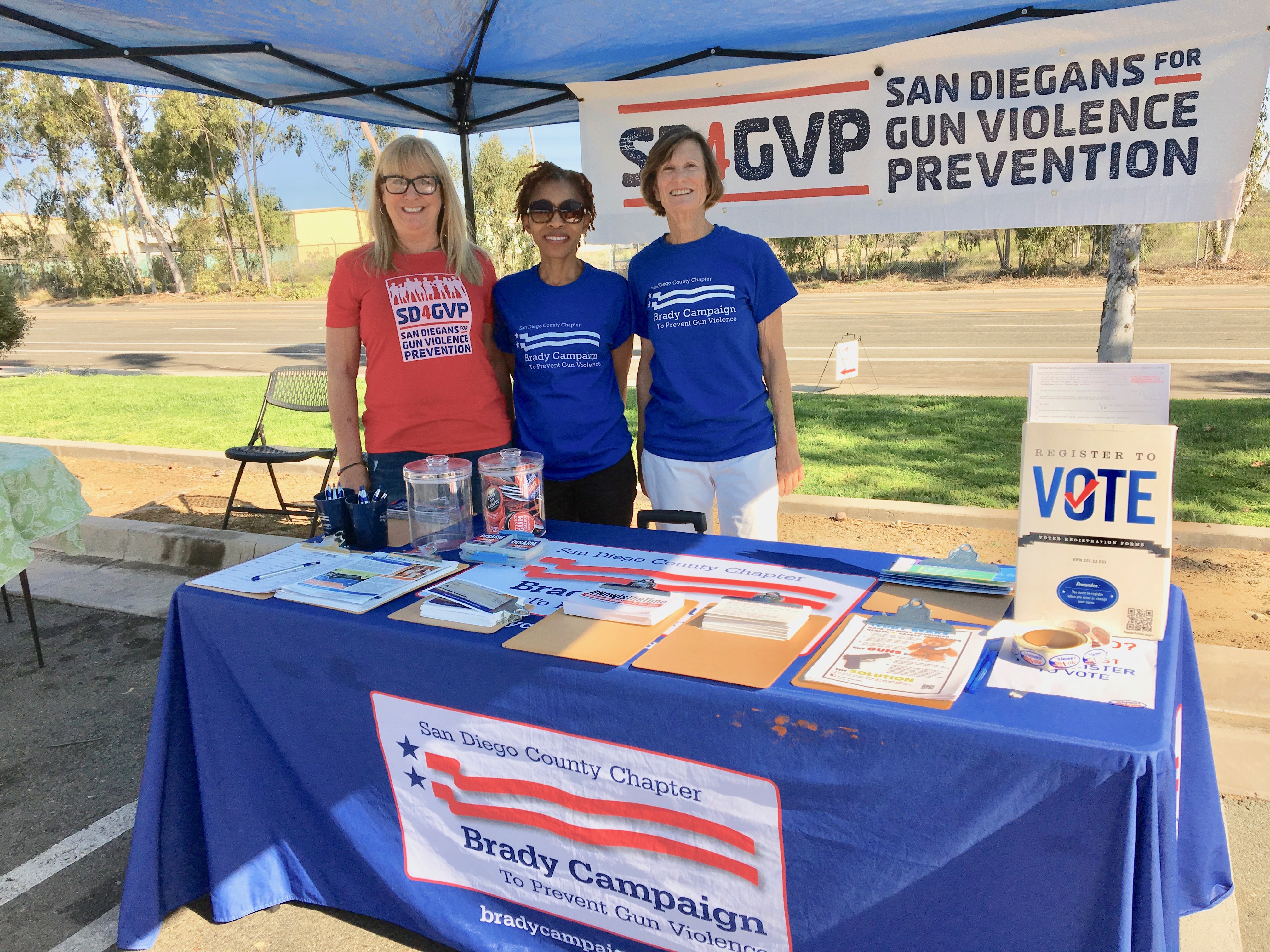 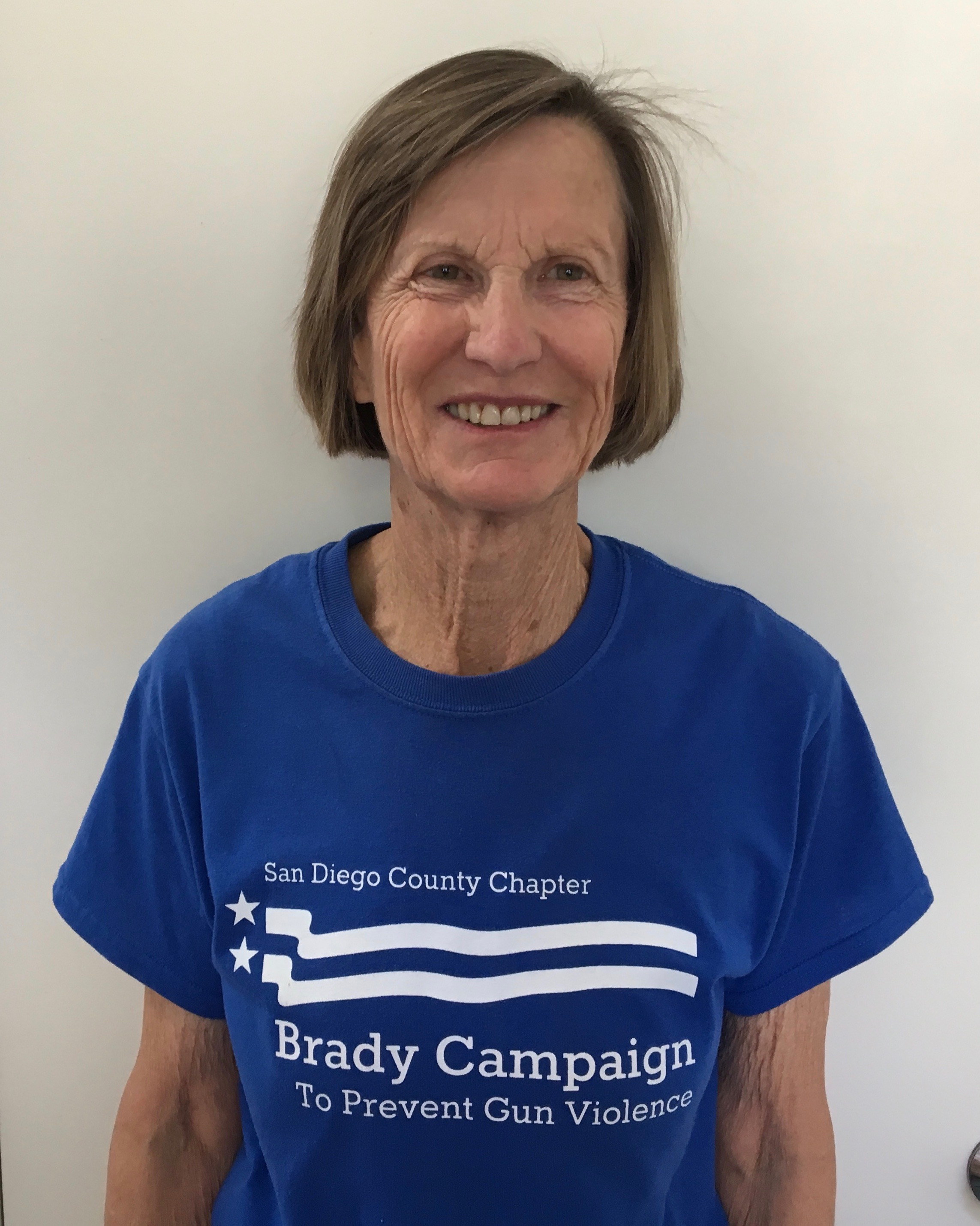 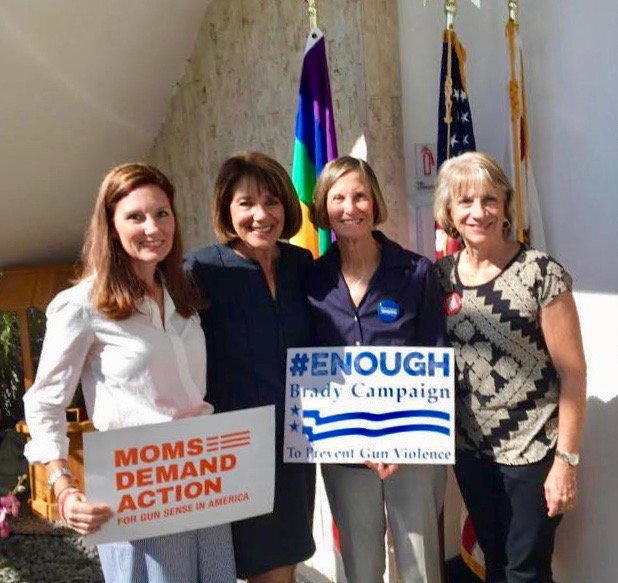 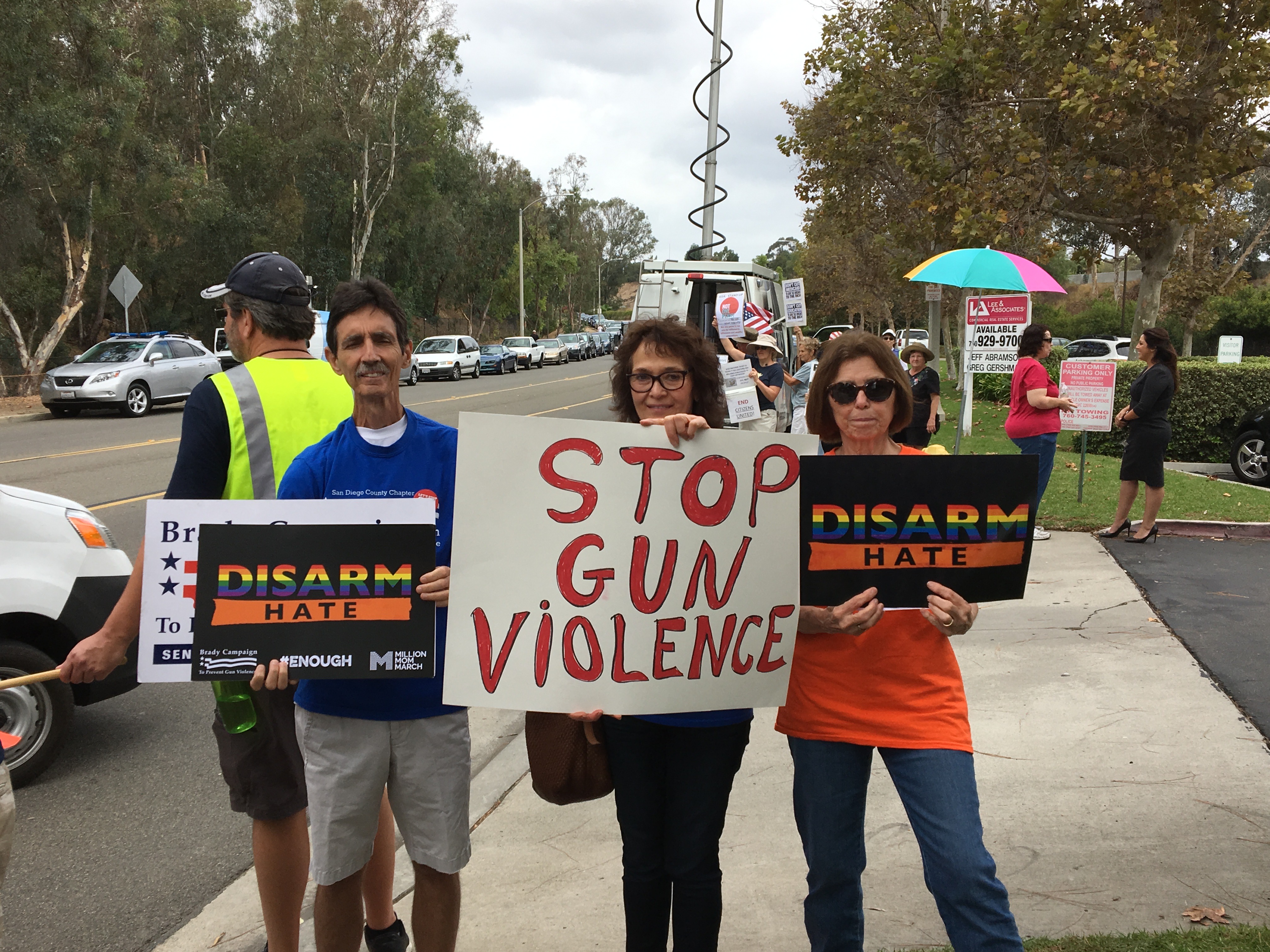 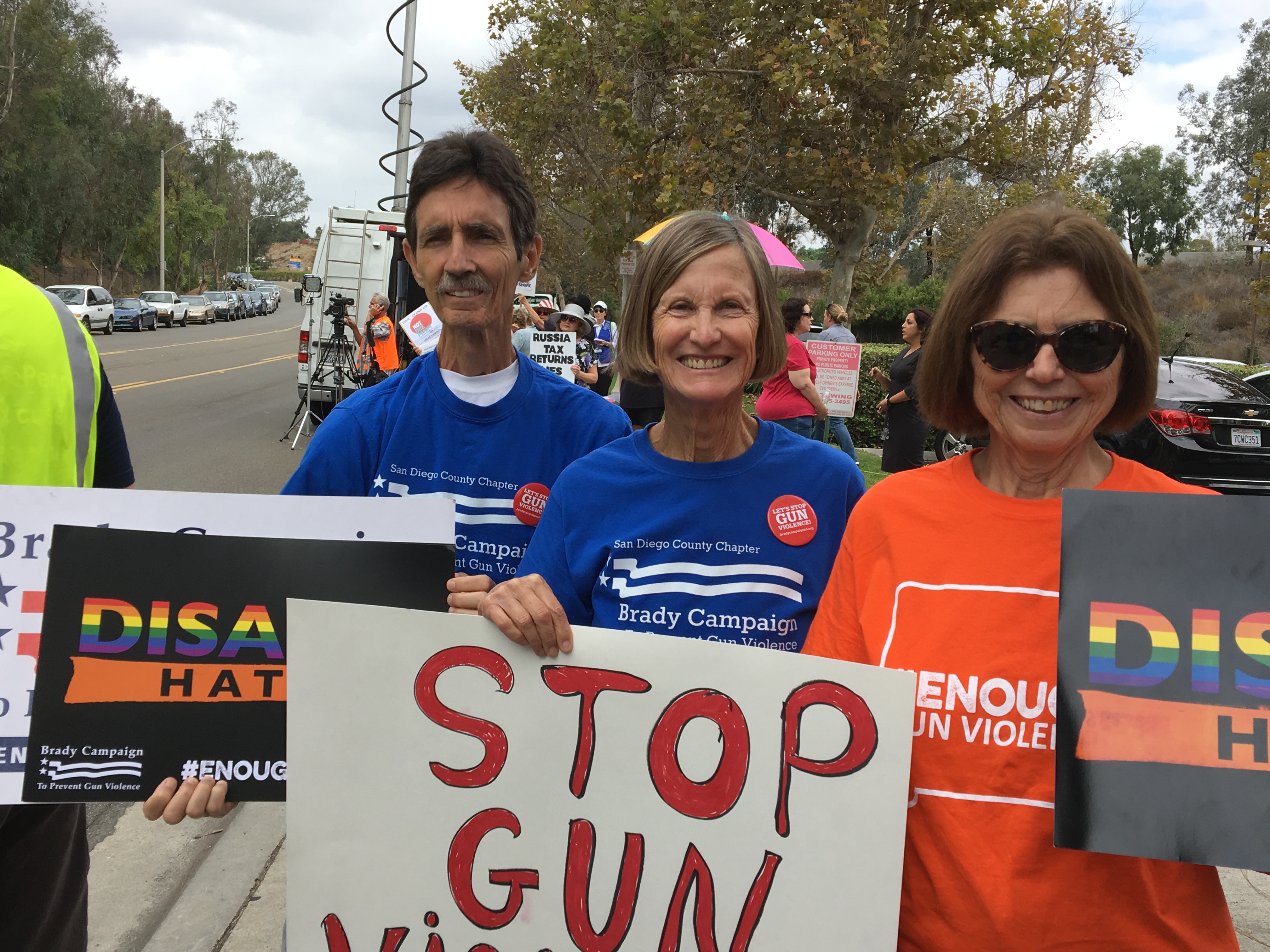 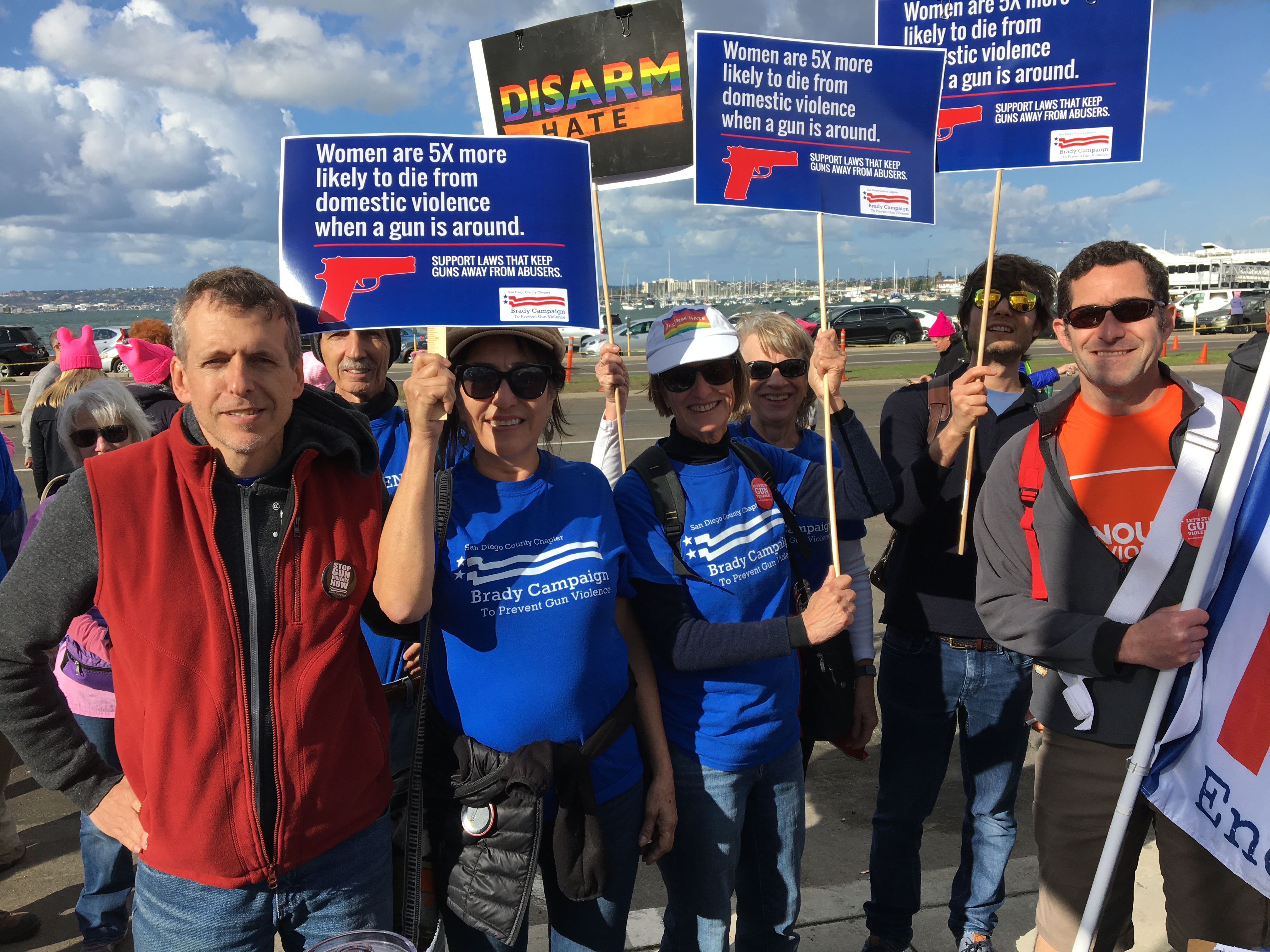 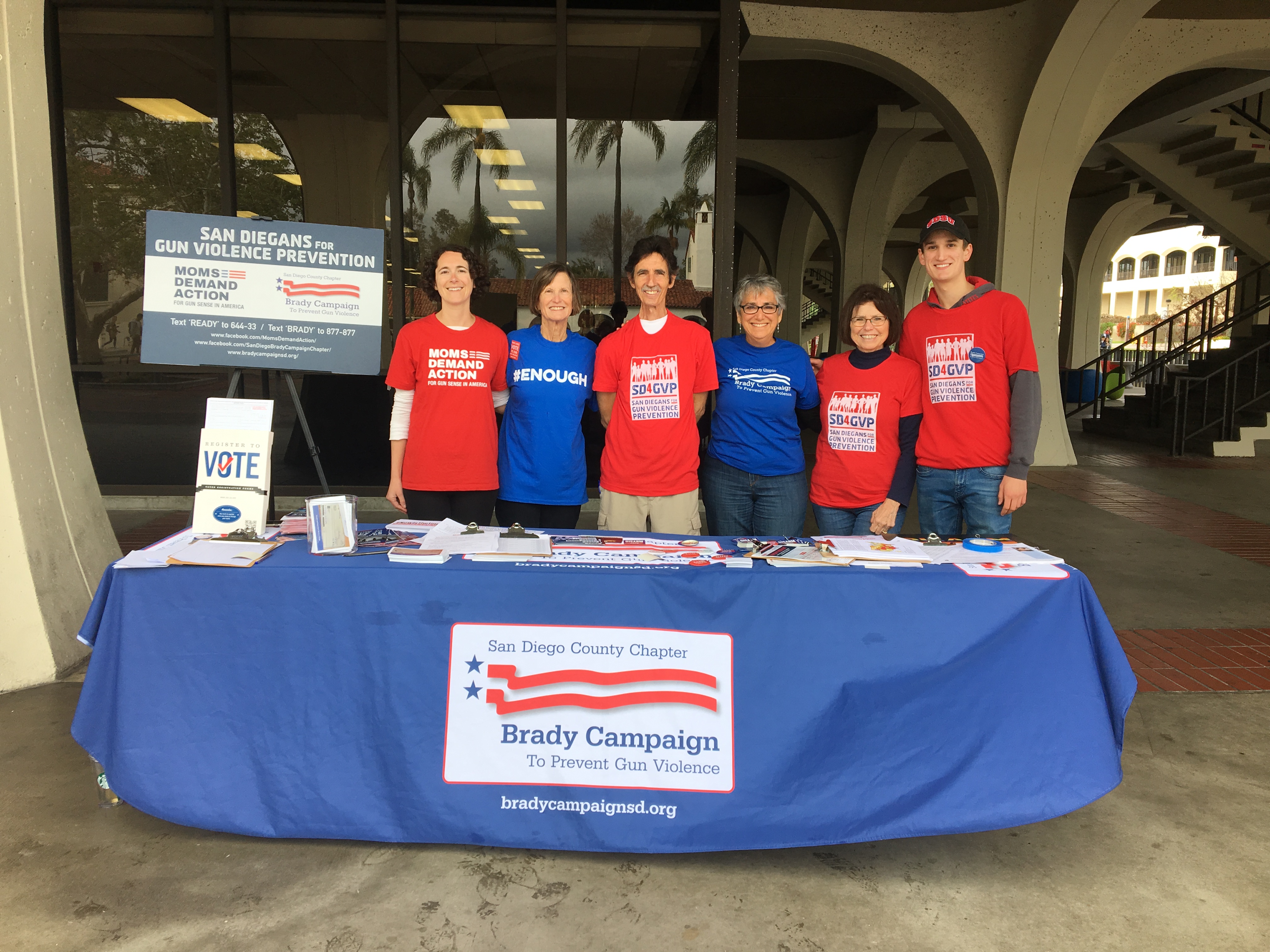