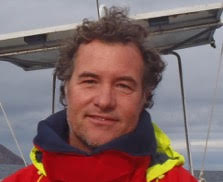 Today we’d like to introduce you to Chris Catterton.

Chris, please share your story with us. How did you get to where you are today?
I spent most of my adult life working on boats, and before that, I was the kid with way too many boats in the bathtub. Some would say I still am that guy! I’ve worked on the water in several capacities. In 1994, after I had spent about six months away from home on boat deliveries, I came home and decided to find work that would keep me there. After I spent about four months sailing my own boat on the California coast and up the Delta, I ended up in Sausalito, not broke, because I still had $20, and thought perhaps I should seek employment! The first day I walked south through Sausalito, along Caledonia St. and Bridge way Ave., put in applications here and there at a restaurant and the hardware store, stopped by the grocery for some provisions, and was down to $10. That night some friends mentioned the local rigging shop might need a rigger, so the next day I walked over there and was pretty much hired on the spot. The next day I was 70 feet in the air trimming the top foil of a Harken furler with a hack saw. Nice view! I spent the next 3 years learning all about rigging, splicing, swaging, making rod rigging, fabricating new masts and booms, refurbishing older masts, writing surveys, writing bids, making tools and working on an old Chevy truck we had! I was next hired at a rigging company in San Francisco and spent two more years of my working apprenticeship there, learning different techniques, splices, and more of the business.

CC Rigging started in Ventura harbor in 1998, when I sailed down the coast to experience living in Southern California. I stayed for four years and sailed the Channel Islands every chance I had. Chasing dreams, and dream boats, led me back to the San Francisco Bay Area in 2002. CC Rigging served the sailing community there for five years while I restored my Islander 44. In 2007 I was able to get out and do some sailing of my own again, and I spent three months on the California Coast and six months cruising Baja and mainland Mexico. I sailed back to San Diego and kept the boat here while I went back and spent another year and a half working in the Bay Area. But the warm weather ruined me; I was too cold in San Francisco! I was debating whether I would stay in San Diego or return to Ventura. I had friends here and though the market seemed a bit saturated to me, locals in the recreational marine industry encouraged me to drop anchor. I began to like the feeling in San Diego. Then I met a woman who would become my wife four years later, and that made my decision MUCH easier.

We’re always bombarded by how great it is to pursue your passion, etc – but we’ve spoken with enough people to know that it’s not always easy. Overall, would you say things have been easy for you?
The sea can be a wonderful metaphor for that answer; like the sea, the path to having a successful business is not always smooth. Of course as there are times when there are adverse currents and waves, challenges abound in business. But as in sailing on oceans, you must make progress. Some of the struggles CC Rigging was faced with were really more with becoming known and trusted in this niche business.

San Diego has always been a sailor’s town and there have always been folks here rigging boats, so it was kind of an uphill road just to become known and given a chance here. There are a good number of people who do what I do here. It took about a year and a half before I was being trusted to do the more interesting jobs I really enjoy. I knew it would take at least a year to build my brand in this area. It is a small community and everyone seems to know each other from way back. Even after almost ten years some still think I’m the “New Guy.”

So, as you know, we’re impressed with CC Rigging – tell our readers more, for example what you’re most proud of as a company and what sets you apart from others.
Cruisers and Classics…that’s what C.C. Rigging is about. I really love helping people go cruising. Cruising can mean anything from a long weekend on the boat to a life of voyaging. Maybe they’re just casually sailing the San Diego Bay, with the idea of longer voyages in the future. Or they have a full-on plan to cross the Pacific and sail the world. I’ve lived on a sailboat most of my adult life and spent two long seasons cruising in Mexico. I have sailed to Hawaii and back, delivered boats north to Seattle, south to Mexico, around the Caribbean; I am lucky to have a high level of real world boating experience.

Another passion is classic boats. I define this pretty broadly, from wooden boats that sail on the Classic Yacht circuit like Lone Fox, or charter on San Diego Bay like Jada, to fiberglass boats from the sixties and seventies. And then, there are modern classics too – boats that are designed with the aesthetic of a bygone era, but fitted out with modern gear and underwater profiles that are quite racy.

As a boat owner, I’m sometimes in the customer’s deck shoes too. I know what it’s like to review information, trying to decide, what’s the right decision here? Who is this service provider? I am proud that I try to provide the level of service I would expect from anyone I might hire.

Another distinction is that CC Rigging is primarily a mobile rigging business. We do not have a store front or a local shop. Most of the work I do is on location, at the boat in its marina slip, or at a local boatyard where we use the crane services to lift larger masts from sailboats for refurbishing and service.

So, what’s next? Any big plans?
Summer is around the corner, and I’m looking forward to longer days for sailing and spending some time anchored out here in San Diego. And just continuing with business as usual. 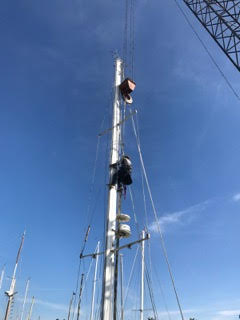 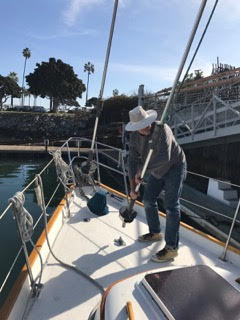 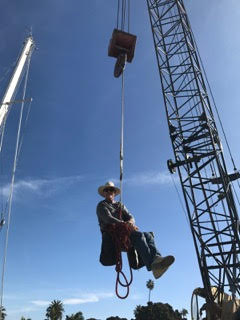 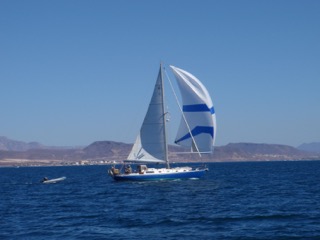 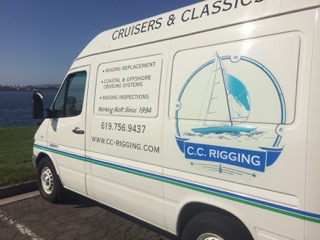