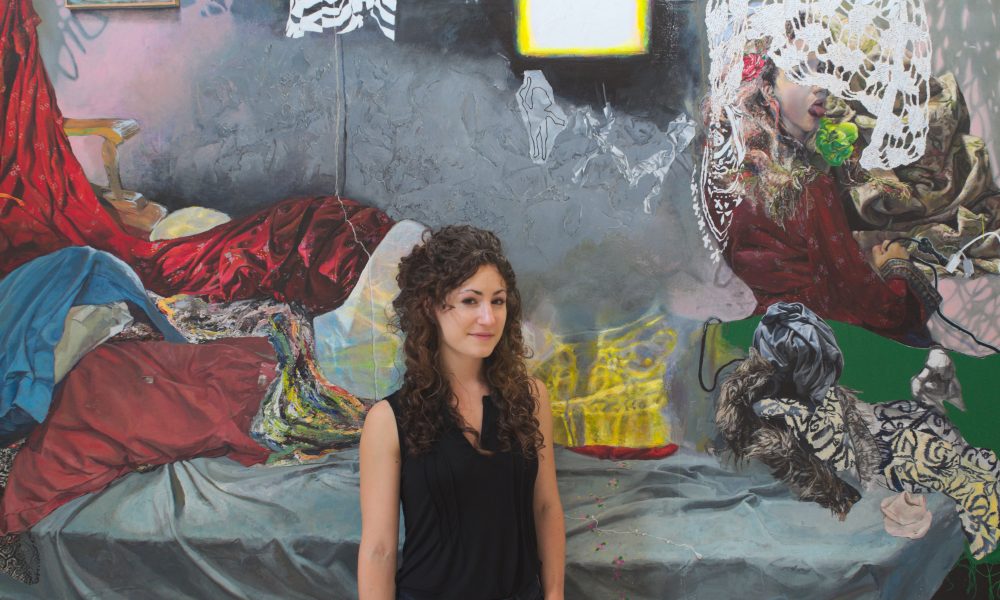 Today we’d like to introduce you to Dana Kotler.

Dana, let’s start with your story. We’d love to hear how you got started and how the journey has been so far.
I began making art rather late, gradually gaining an interest in drawing in high school, and starting to paint in college. Throughout my childhood, it has somehow not occurred to me to draw or paint very much. Instead, I resorted to staring.

In college, I was incredibly lucky to have met my painting professor and later friend, George Dugan. When he spoke, he did not speak like my art teachers in school or elsewhere. He spoke of perceptions, of sensations, of abstractions, he was the first real artist I had ever met. I tried painting for the first time in Prof. Dugan’s class. I was quite uneasy thinking about paint, but with the first mark on the canvas, I was completely hooked.

The experience of smearing stuff on a surface was entrancing, and I recall spending hours spreading the creamy white and black, seeing things I’ve never seen before, slight value shifts that all of a sudden became insanely beautiful. I was painting the most boring little white cube, and at the end of the day, I knew that I have never seen anything like it.

At some point soon, I found that there is no way out, and I will have to pursue art full time, although I still completed my degree in Molecular Biology. After a period of trying to make my work while doing commissions and teaching children, I attended graduate school at the New York Academy of Art, where I met some amazing artists.

I think my work had started to become more like itself right after graduating. I received two grants from the Elizabeth Greenshields Foundation and focused exclusively on my work in a rather isolated setting. The lack of advice, criticism, or praise, had forced me to make much more personal decisions in my work. I have discovered that the process of artmaking is capable of informing and changing me, and I found ways to let it be a constantly unknown territory.

Currently, I show at various galleries and art centers around the US and instruct a summer study abroad course in Dingle, Ireland. I have taught courses in colleges in Boston, MA, and most recently at UCSD Extension.

We’re always bombarded by how great it is to pursue your passion, etc. – but we’ve spoken with enough people to know that it’s not always easy. Overall, would you say things have been easy for you?
The biggest struggles are of course always in the studio. The value of a work of art is a very difficult quality to assess. The nature of my work is such that the pieces come together gradually, with very little planning, and with much surprise. As a result, it is very hard for me to determine, whether something turned out worthwhile or not.

When something does work, it is hard to know whether and how I can achieve such a thing again. Usually, the work goes through periods of high and low before it comes together (or doesn’t) in the end. However, that uncertainty and struggle to find any kind of path is worth it all when the piece does work out.

Outside the studio, the strangeness of the art world and its values inevitably burdens one with a load of issues, that can easily make one lose faith, and yet it is a whole package, that contains the wonderful as well, and is most certainly worth it.

Experiencing the art market and the career aspect of it all can at times be demoralizing. However, when it comes to the work itself none of that makes the slightest difference – I find it crucial to close the door. Things like failed sales, unwon awards, unsuccessful exhibitions, or superficial responses to the work, can be upsetting. However, first of all, those are irrelevant to the actual work, and in any case, all is counterbalanced when things do work out.

We’d love to hear more about what you do.
My work is a means to leave evidence of the process of making sense of the human universe. I make my way through the various experiences in my personal life, to address universal issues such as impermanence, absurdity, memory, hope, creation, chance and the overall oddness of existence. The work is a series of gradually piled up events, some of which turn out lucky. Each event is a decision, accident, mistake, or discovery. They build upon each other, resulting in an object with its own logic and unity.

Most of my work is large and takes place over a lengthy period of time since I need that time and space to accumulate my thoughts and actions and let them interact with each other. Sometimes I manage to make a smaller piece. I am interested in surfaces that have lived, and in the experience of living with them. A higher understanding of anything is not necessarily achieved in the end, but it is certainly hoped for.

The sources of my imagery stem from direct perception (primarily still lifes), imagination, memory, and sometimes photography. I intermingle all these in each work and play with various languages of painting, intertwining spaces, and lately, sculpture and low relief, to explore new dimensions, relationships, and meanings. I sometimes inconspicuously incorporate other materials into my paintings, such as fragments of other paintings, glue, and various objects. The works aim to contain composite figures, and irreconcilable spaces, where physics is subsidiary to narrative and symbol.

The process of making the work is thrilling to me, I never know what will happen, and the painting becomes a companion in my conversation. I usually find definitions to be limiting and unsatisfying, hence when something begins to look too much like its symbol rather than like itself in my work, I tend to expand its meanings and obscure its clarity, because I think that everything is much more full and extensive than its surface or its name.

I am interested in letting the painting unfold very gradually for myself and the viewer, as he/she finds the various aspects and juxtapositions that comprise it, over a period of time, building a relationship with the piece. I learn much from my work and continue to discover meanings even after the completion of the piece.

Has luck played a meaningful role in your life and business?
Luck has become an increasingly significant aspect of my work. Frequently, as the piece progresses, various decisions get piled up onto each other. The circumstances of my life, and just simply accidents, cause me to make one decision or another.

Even a juxtaposition of two decisions that initially seemed dumb can create something better than I could have imagined. Oftentimes it seems that the work is built around luck, which can even seem to be a stressful thing, since I worry whether the same luck will be present in the next piece, so my solution, is to work on each piece over a lengthy period of time, in order to provide as much opportunity as possible for luck to manifest itself. 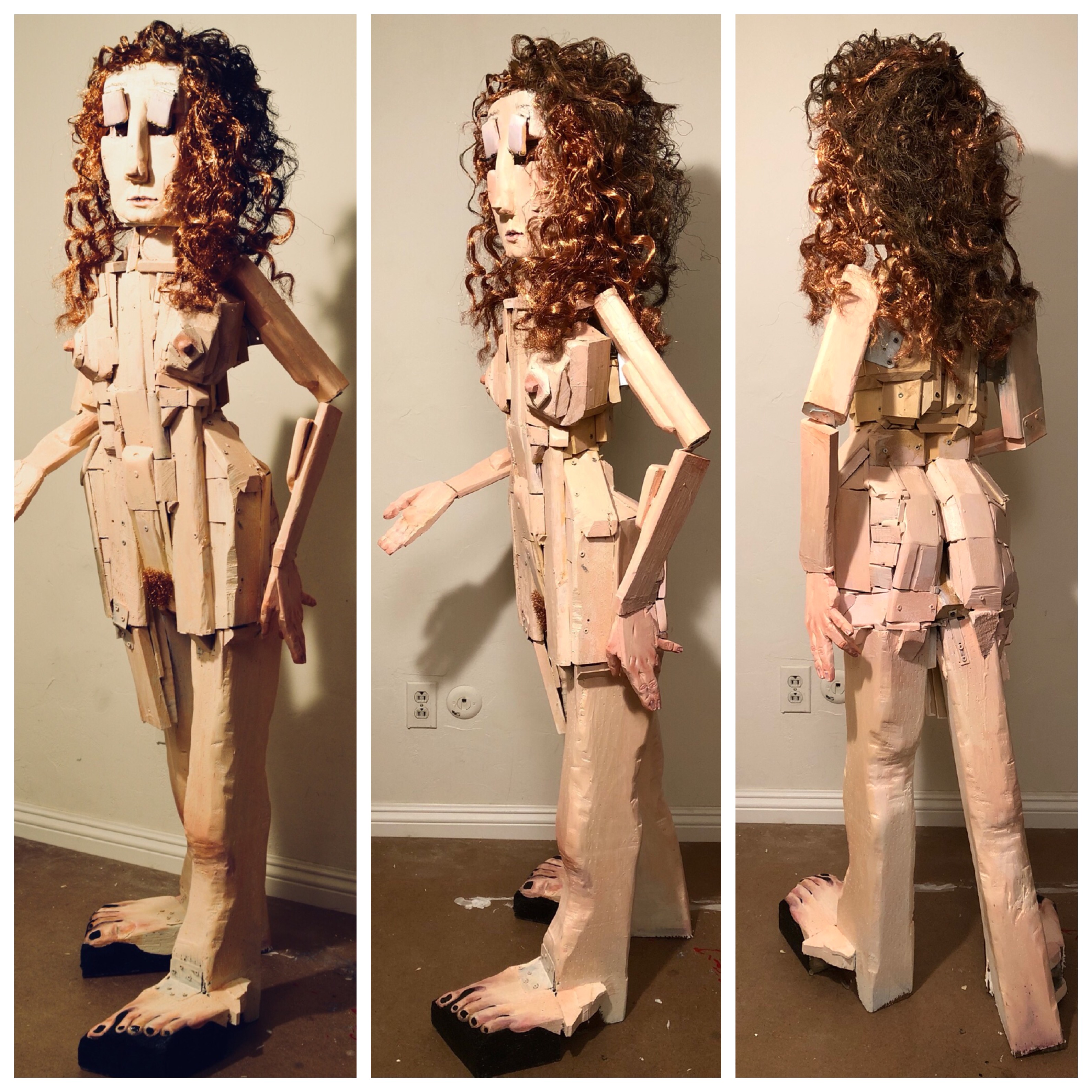 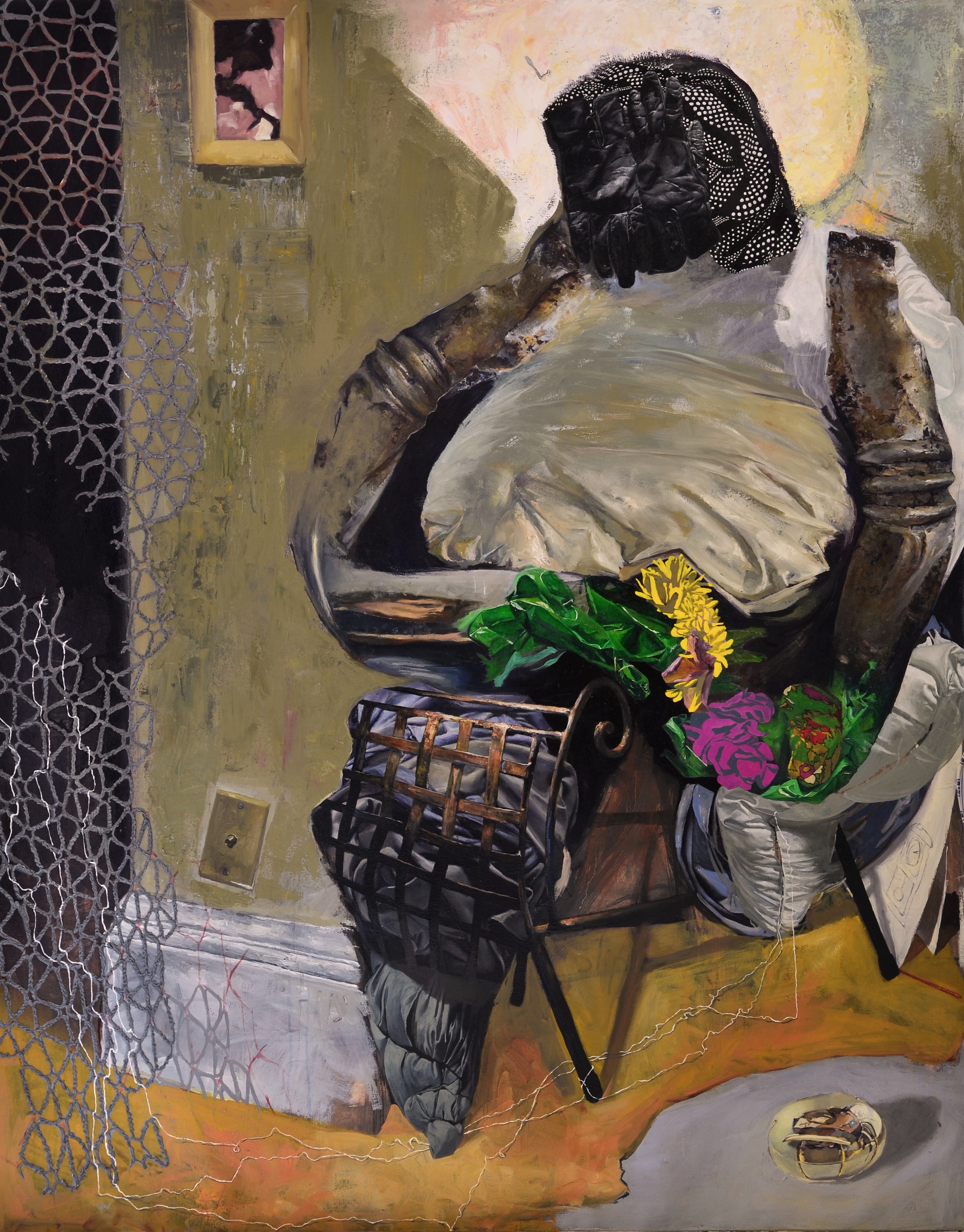 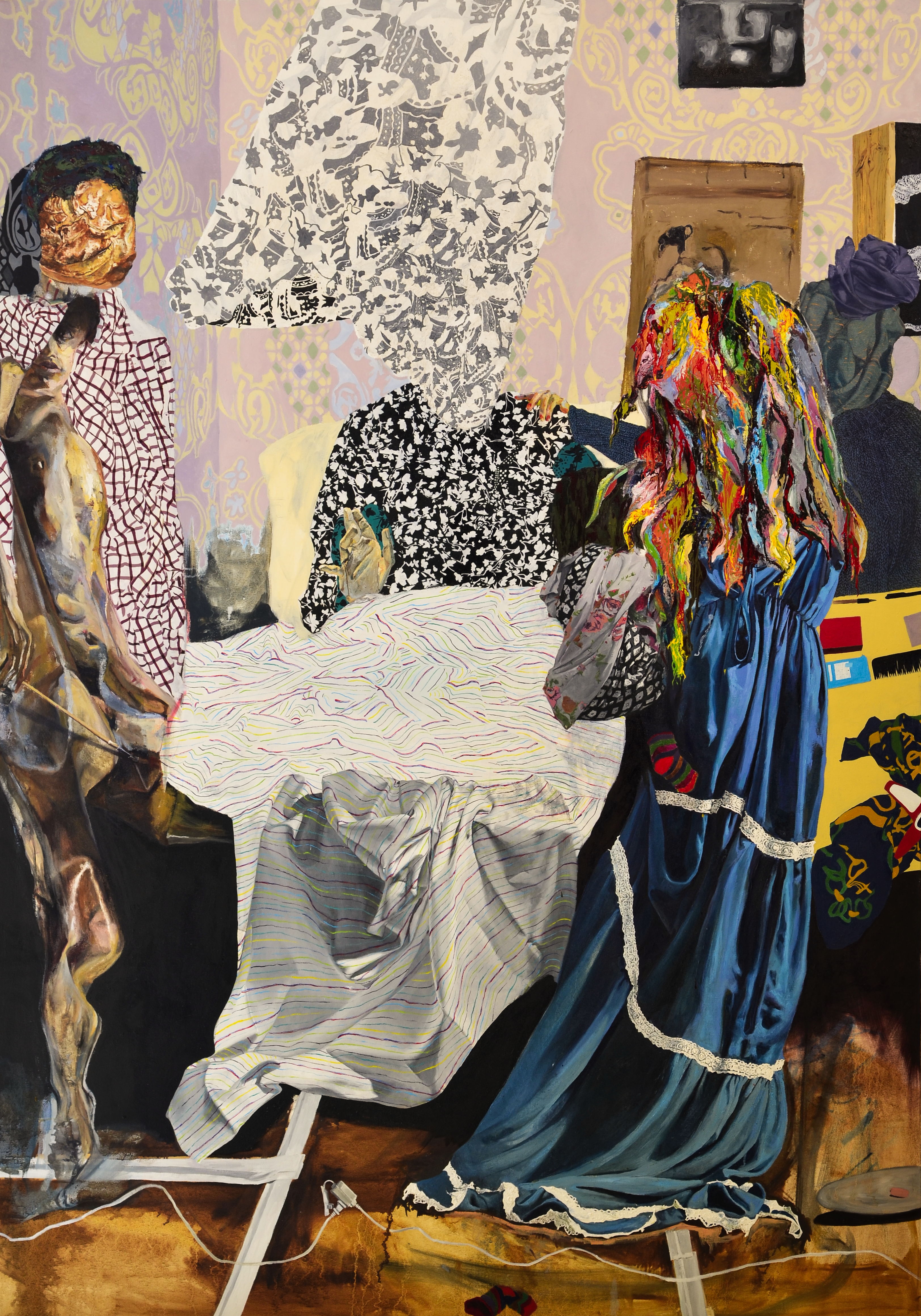 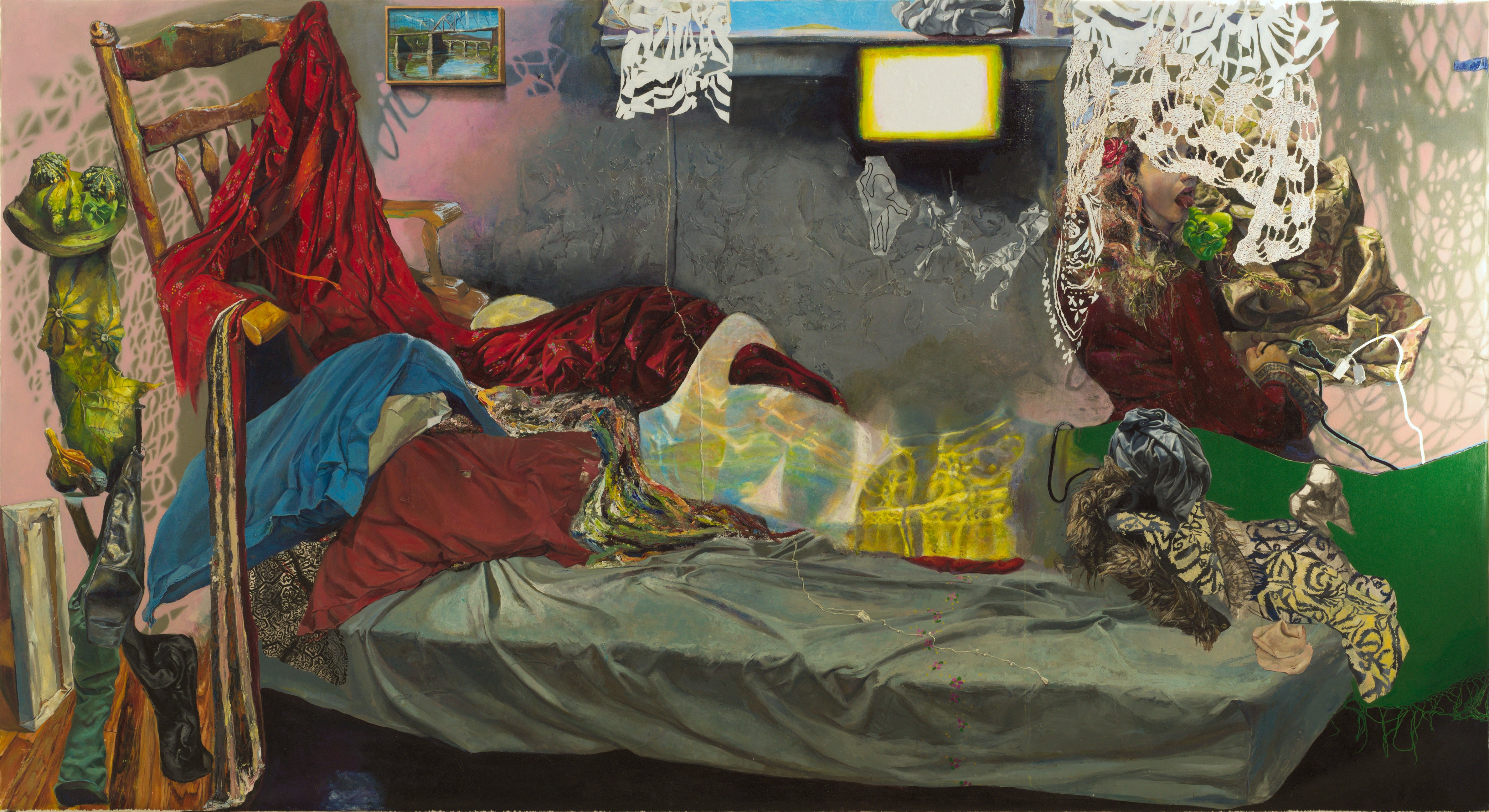