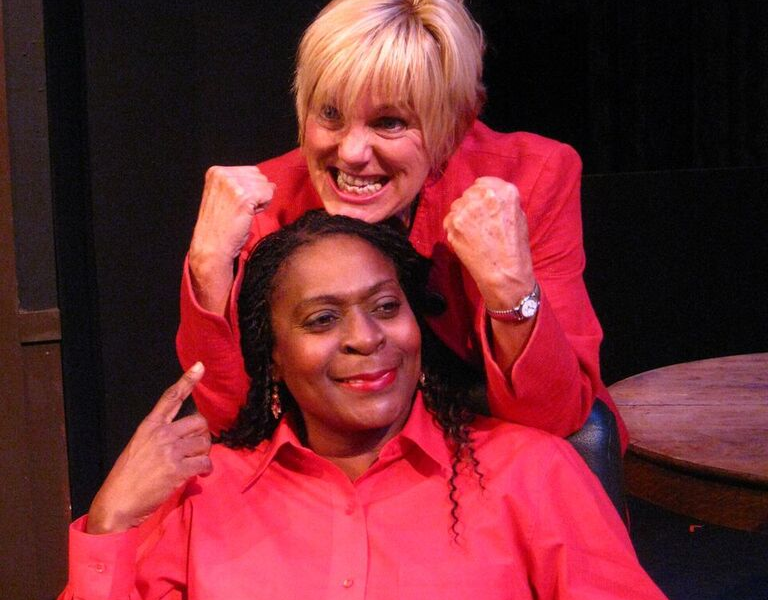 Today we’d like to introduce you to Dori Salois.

Dori, can you briefly walk us through your story – how you started and how you got to where you are today.
Our site specific theatre has produced theatre projects in a variety of settings in addition to the traditional spaces in town. A few years ago we took over a 3,000 square foot building in Belmont Park and brought Antenna down from San Francisco to create Artery a walk though piece where you are the character stealing diamonds, climbing through windows and experiencing your own death scene which ran 7 days a week for three months in the summer. An amazing feat for a small theatre company! We ran a shortened version of our The Importance of Being Earnest the Musical! At The Westgate using the lobby with that magnificent stairway and antique piano first for the winter Holiday with an Equity cast, then ran it again all summer with an Equity cast, adapting the set to fit the ballroom and various other locations throughout the hotel. We also placed a piece Orpheus Rox portraying Orpheus as a rock star set in the 60’s Summer of Love at the World Beat Center where the audience sat in the center and the production happened above, around and near them with an interactive Be In Scene while viewing news footage of the times, Greek mythological films and rock and roll.

We then produced a serious political piece Death By Survival directed by Dori Salois about the disappeared in Argentina and set that at the Centro Cultura de La Raza, Vantage energized that space for theatre and did two more productions there, School of The World and Cadenza Mozart’s Last Year. We followed that producing the New Perspective Festival which featured 24 short plays by San Diegan playwrights, with 20 directors and 60 local actors. We also produced more traditionally at the San Diego Rep running two award winning show in repertory C’est L’Absurd and Frankie and Johnny.

We were the driving force bringing Anna Deavere Smith in Let Me Down Easy direct from her production in NYC to San Diego brokering a partnership the first of its kind with Vantage Theatre, San Diego Rep, La Jolla Playhouse and Arena stage.

As Executive Artistic director, Dori has directed and produced at least over 30 plays. Robert Salerno now joins her in the theatre as the current Artistic Director as playwright, and director. His most recent piece was a collaboration with the Timken gallery presenting a shortened version of Cadenza Mozart’s Last Year for the mainly Mozart festival. This piece was site specific and utilized the exquisite gallery as Mozart’s apartment. He also created a new outreach work with the Promotora del Las Bella Artres in Tijuana about Tchaikofsky’s life and music. Last Season Vantage created a site specific theatre space in La Jolla and presented the NY Outer Critic’s Circle nominee for best Off-Broadway play Rasheeda Speaking by Joel Drake Johnson. This January vantage in cooperation with Talent to aMusae is presenting the world premiere of The Color of Light by Jesse Kornbluth an award winning author and journalist.

Great, so let’s dig a little deeper into the story – has it been an easy path overall and if not, what were the challenges you’ve had to overcome?
Being site specific has its challenge and rewards. We are able to reach new audiences in fresh new ways. Each non-traditional site has its problems to surmount, Be it setting up lighting, sound, adding stage area and where are the dressing rooms! Our current production of The Color of Light offers really the best of both worlds. a traditional theatre for the production, an art gallery for audiences to meander, and a beautiful roof top lounge to take in the city view. It provides our audience a full artful experience.

Alright – so let’s talk business. Tell us about Vantage Theatre – what should we know?
Vantage Theatre presents theatre from a different “Vantage point.” For over 30 years, Vantage has been known for its innovative approach that often incorporates live performance, music, video, and site-specific productions to create a unique and memorable theatre experience. We seek plays that feature Big Ideas and bold and innovative staging. Our goal is to not only entertain, but to provoke thought.

We seek “The Great Aha!” We strive to light the self to become “illuminated, enlightened, elevated as well as entertained!

Is there a characteristic or quality that you feel is essential to success?
Innovation, Flexibility and Risk. We present theatre from a different “vantage point’ that will stimulate the mind, open the heart and raise the spirit. From the Queen of the Night and Sarastro from the magic Flute fighting for Mozart’s soul. and Einstein time traveling into Mozart’s consciousness in Cadenza Mozart’s last Night to A psychedelic Journey with Ram Dass, Then presenting a dark comedy of Race and Power in Rasheeda speaking and now finally to explore Matisse’s last years and his creation of his final masterpiece in The Color of Light. Vantage always provides something new and exciting. 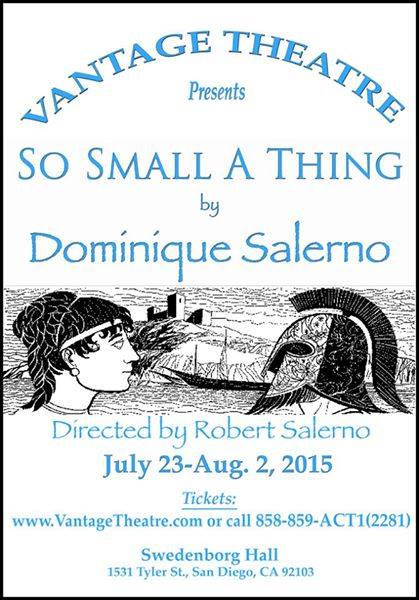 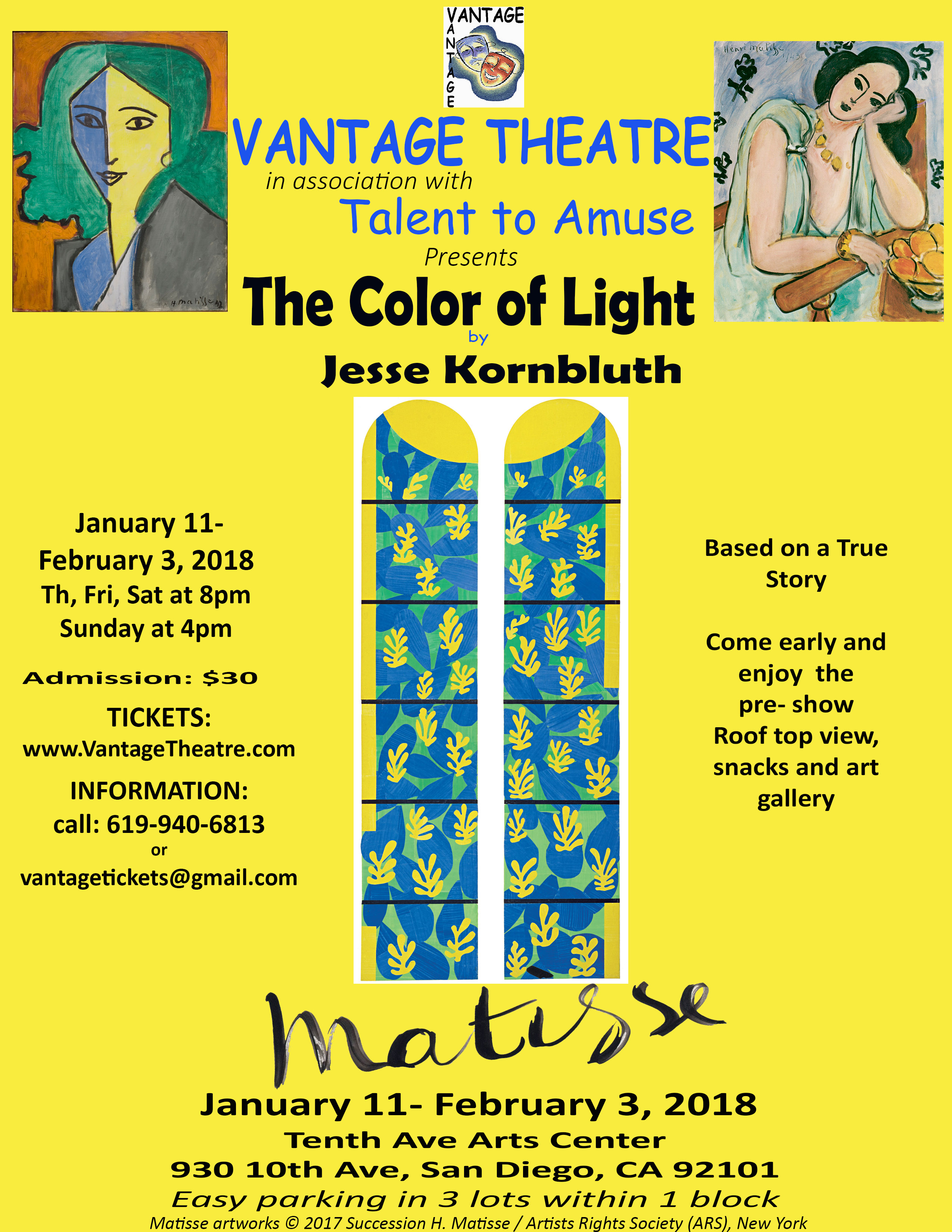 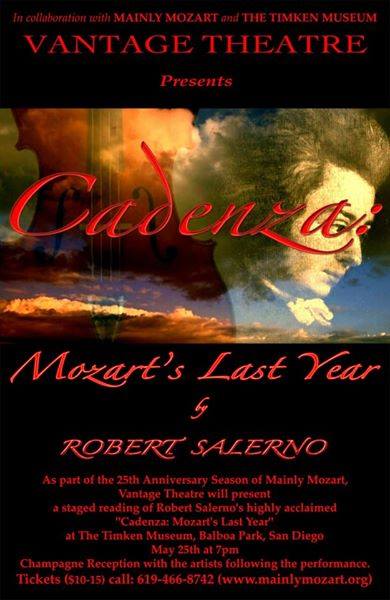 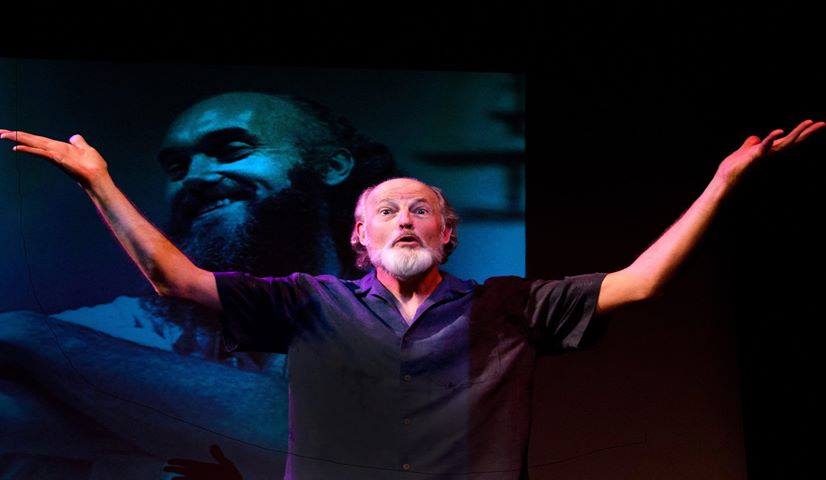 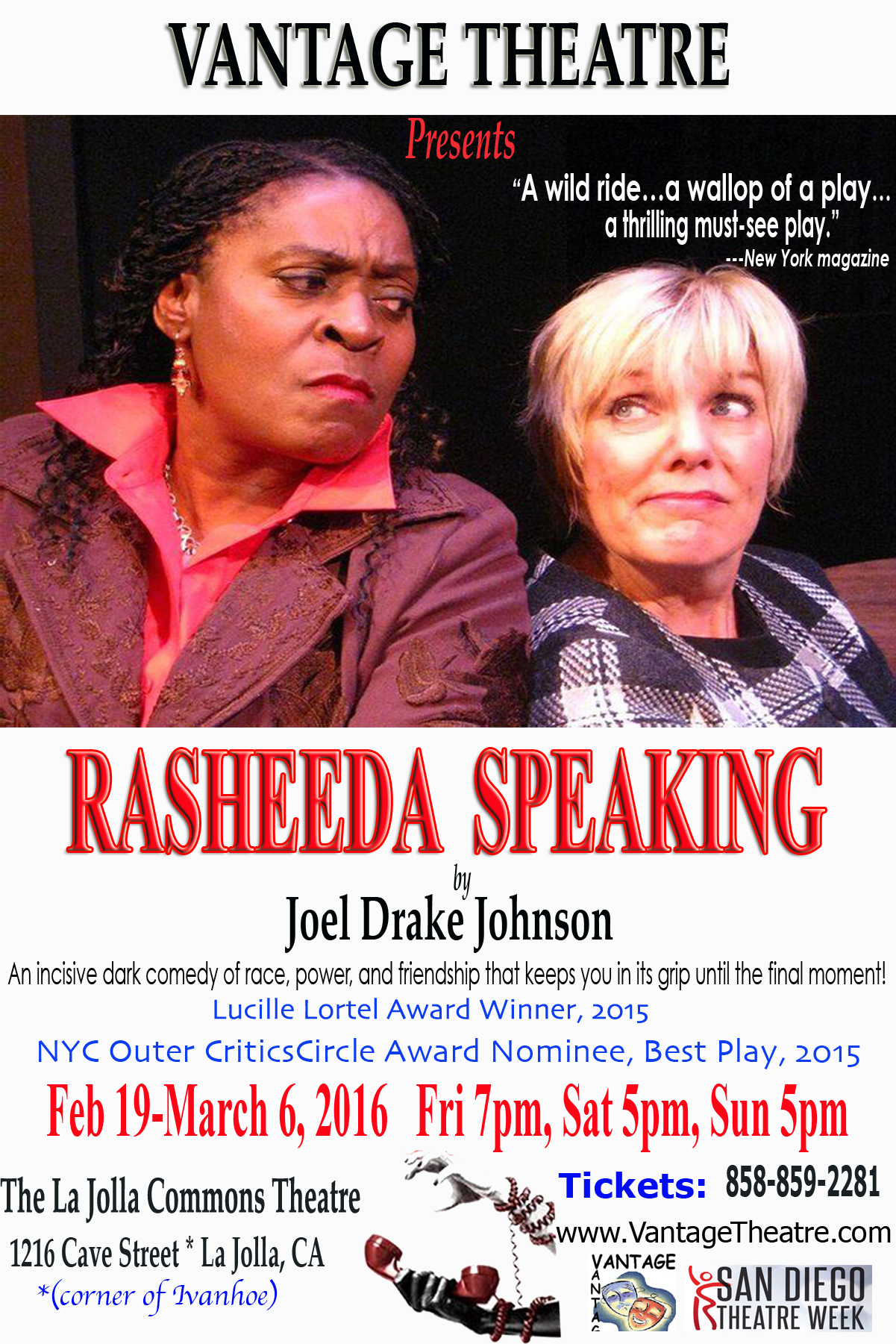 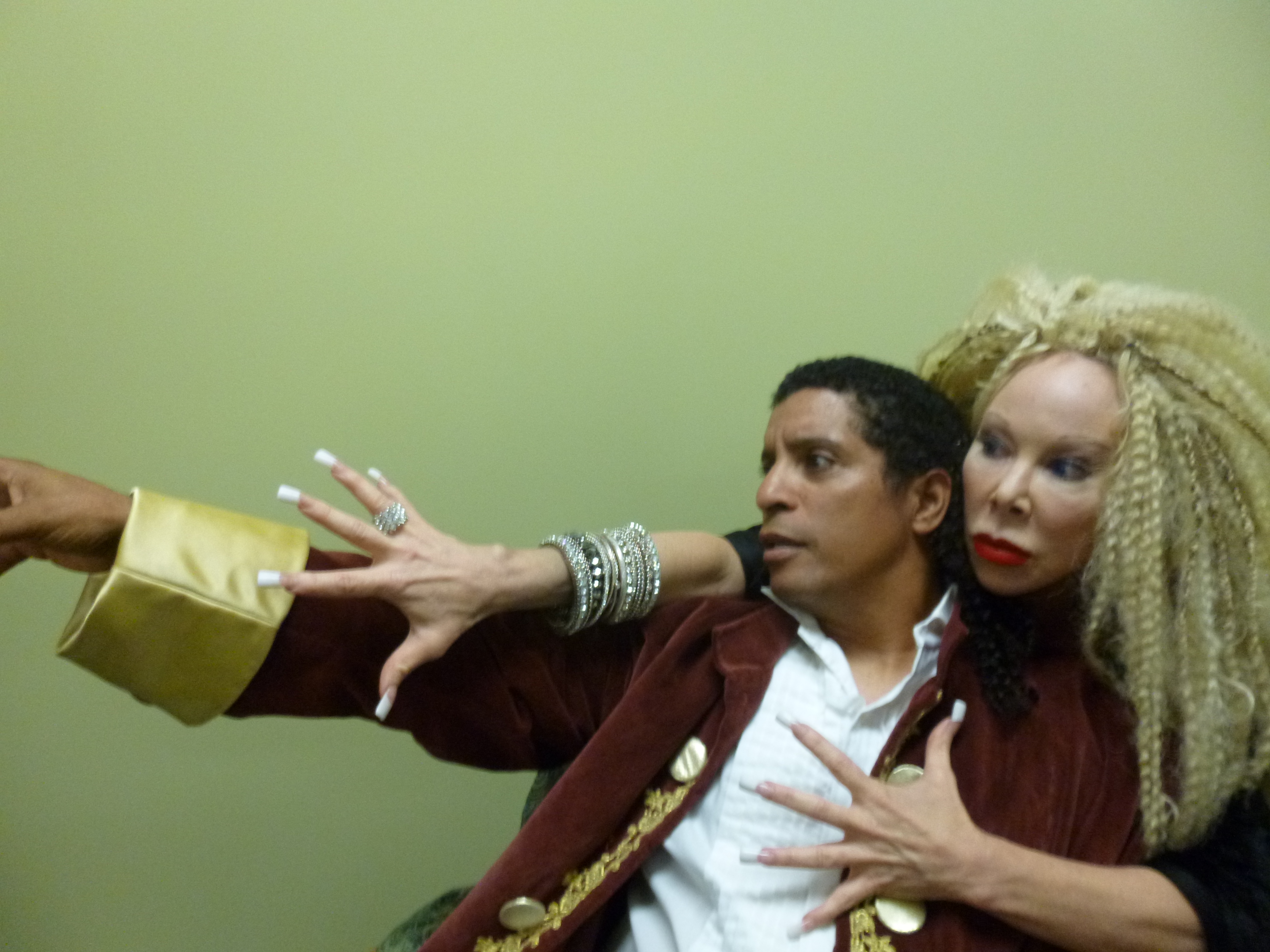 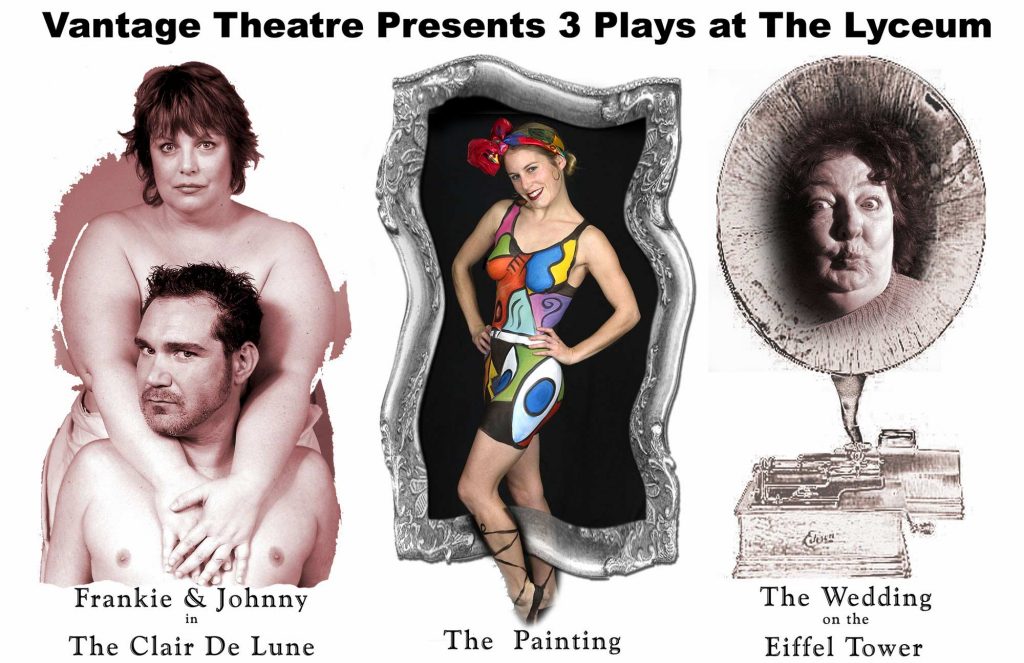