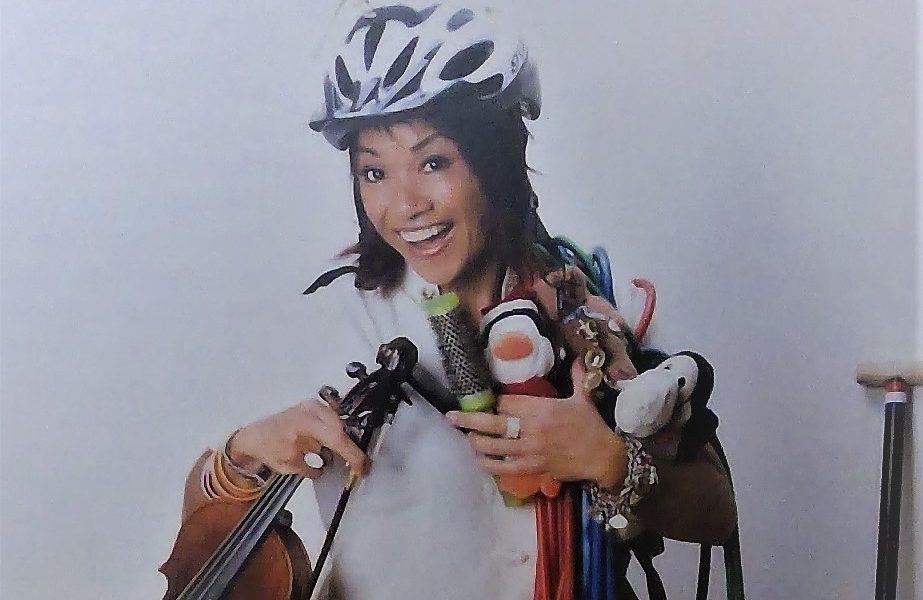 Today we’d like to introduce you to Grace Bernal.

Thanks for sharing your story with us Grace. So, let’s start at the beginning and we can move on from there.
In 2003 after my breast cancer lumpectomy, I was told that I would have to undergo a 2nd surgery to remove my lymph nodes. I told the doctors that I couldn’t have the surgery because I was supposed to run the SD Marathon the following weekend. The doctor was skeptical and said, “We’ll see about that!” In my mind, I thought, “You have no idea who you’re talking to!” (I had been training for the marathon for a year!) The doctor tested my flexibility after the surgery and was able to perform to his satisfaction and he gave me the go-ahead to run the marathon. In my experience of this, I decided that it would be in my best interest to always have a doctor that understood and participated in some exercise regimen.

I decided I wanted to start an outrigger canoe team comprised of breast cancer survivors. I had no idea anything like that existed. I put this in picture form on a “vision board.” The following morning I received an invitation from a group called, “Team Survivor San Diego” that was forming a dragon boat team comprised of all cancer types of survivors. I couldn’t believe my eyes! I met with the team the following day, and the minute I got into the boat and onto the water, I cried. I knew my whole survivorship would be forever changed in a way that my spirit knew I was called to contribute to others in survivorship through fitness.

I have been committed to Team Survivor San Diego (the name evolved to TS Sea Dragons as the majority of our members are on the dragon boat team even though there are also walking and yoga branches as well. (In the beginning, there was also a triathlon program which some of us participated in, but as you can imagine, this is not a program that not many would be called to.) I am honored to be the fitness specialist/advisor for Team Survivor for 10 years! We have an amazing team of strong, powerful, committed women whose ages range from 30’s (our youngest was 18 and she is now in university), and the eldest is 80!

After all these years, I have been uncomfortable with the use of the word survivor to describe my existence as a (now 15 year) survivor. When I am in the midst of my teammates, when I cross a finish line, when I get to travel the world with other world-class athletes and feel the medal around my neck, I am reminded of something bigger, something more powerful that comes from being rebirthed from my breast cancer diagnosis. For Team Survivor, our byline is “Thriving while surviving,” One morning it came to me that I am actually not just a survivor. I AM A THRIVOR! and am very proud to be a part of Team Survivor San Diego Sea Dragons!

We’re always bombarded by how great it is to pursue your passion, etc – but we’ve spoken with enough people to know that it’s not always easy. Overall, would you say things have been easy for you?
For the first 10 years, just before my “re-birthday” May, 5, I made sure that I followed a 95% raw diet as a way of preparing my cells for the shock of recalling the anniversary of my diagnosis and surgery. It was an emotional journey every year, and while I kept this to myself, I would be asked questions of my teammates regarding fitness concerns and then discovered that their concerns often coincided with the anniversary of their diagnosis. Once I discovered that I wasn’t the only one with this concern and insight, it became easier for me to overcome this annual challenge of an underlying fear of recurrence.

So, as you know, we’re impressed with Team Survivor Sea Dragons San Diego – tell our readers more, for example what you’re most proud of as a company and what sets you apart from others.
Team Survivor San Diego offers free exercise programs open to women of all ages and fitness levels, in all stages of cancer treatment and recovery. Though we also offer yoga and walking activities, our dragon boat paddling program offers the deepest sense of camaraderie and greatest level of fitness. Women from all over San Diego converge twice a week for rewarding paddling workouts led by our most outstanding coach. I am proud to be a part of this enthusiastic group of powerful women as their fitness advisor.

So, what’s next? Any big plans?
Team Survivor San Diego Sea Dragons meet throughout the year to discuss and plan our racing schedule for the year.

We have raced as far a Canada (where dragon boating for breast cancer was started by an oncologist.,) Oregon, Nevada, and throughout California. We are presently considering Montana, Wisconsin, and other parts of the US.

The biggest changes for Team Survivor San Diego is that we are now becoming our own entity, and recruiting new members and fundraising is always on our agenda. 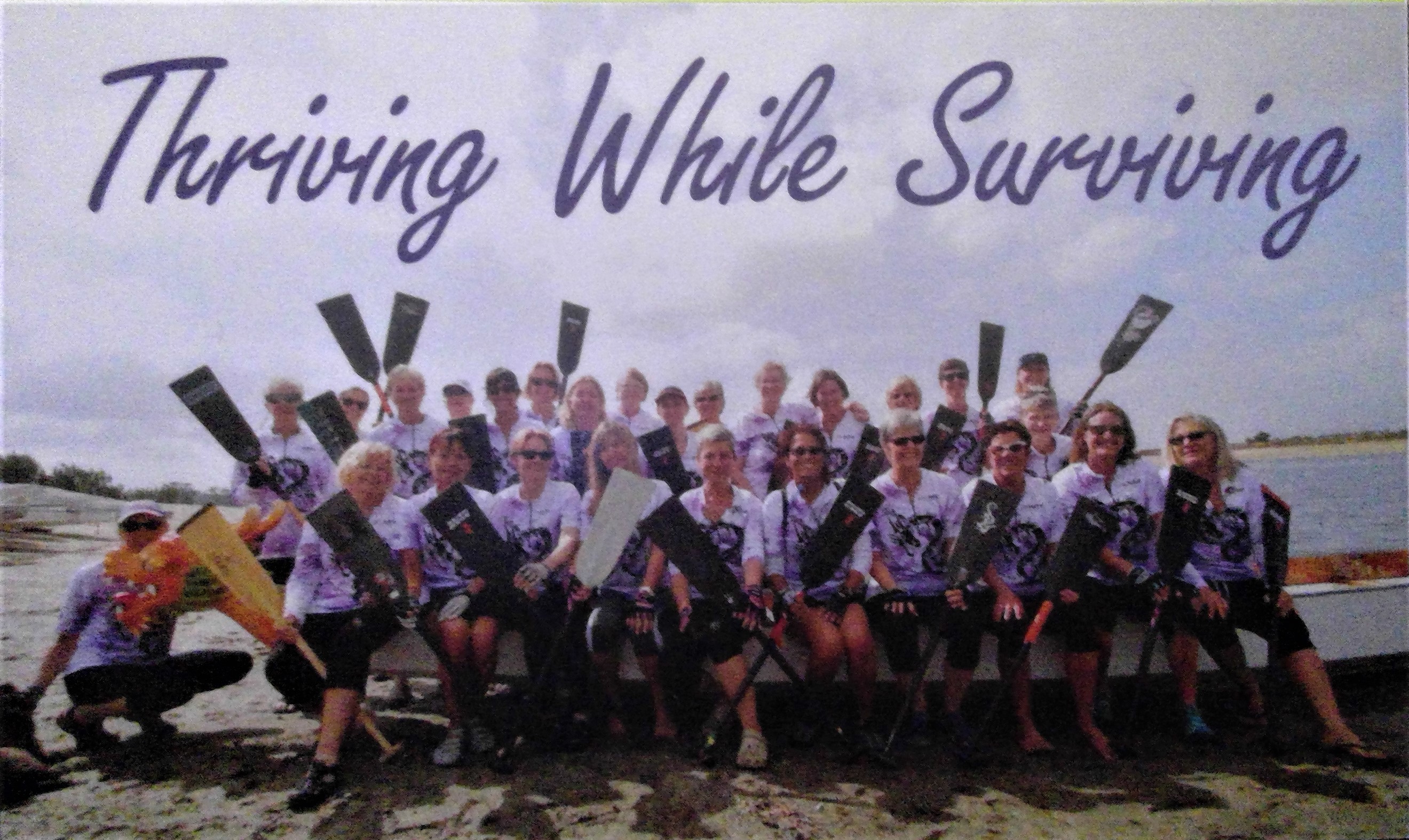 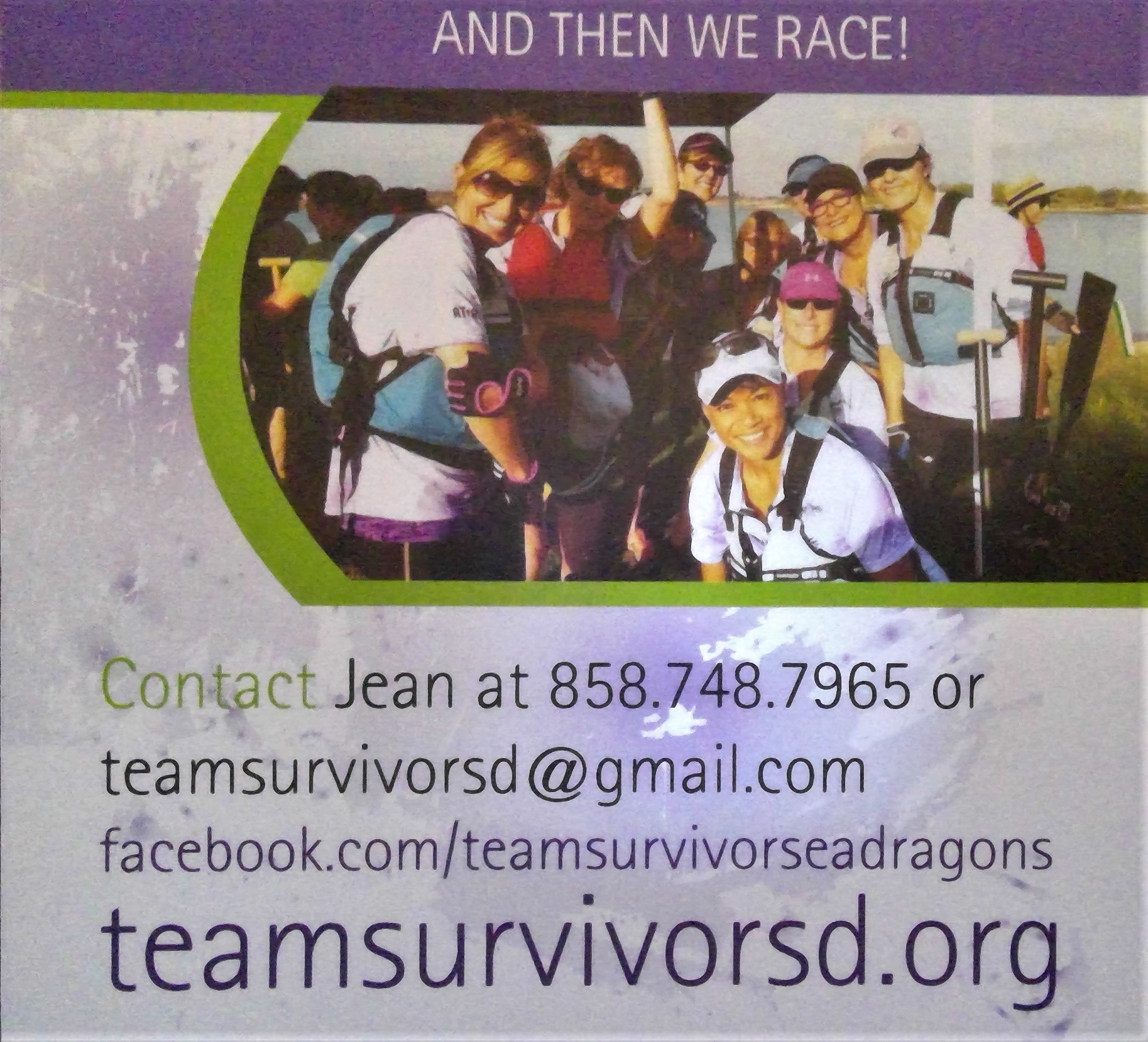