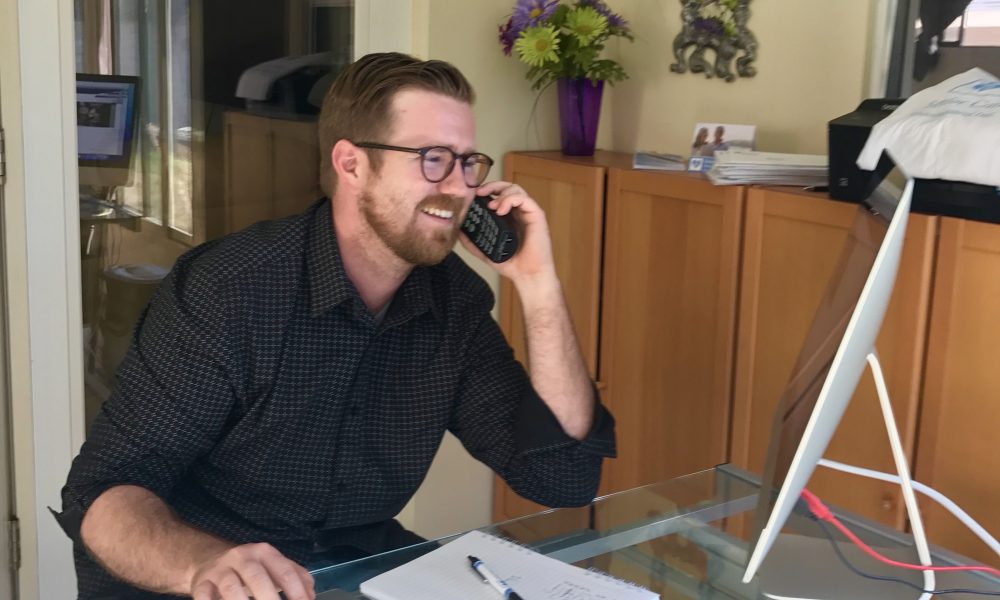 Today we’d like to introduce you to James Frame.

James, can you briefly walk us through your story – how you started and how you got to where you are today.
I grew up in San Diego in a musical family with my dad playing music for long as I can remember. Some of my earliest memories were getting on the drum set at my uncle’s house and just smashing along with whatever my uncles were trying to play. Along with my early introduction into drums I sang in church and even recorded a few children Christian album when I was about four or five.

I ended up finally taking the drums seriously when I was in Jr. High and would practice for hours a day. Thank you to my parents for dealing with that! I played in all of my Jr. and Sr. High school bands and ended up playing professionally at age 15. I would play most Fridays and Saturdays around bars and clubs throughout San Diego.

When it came time to go to college I applied to Berklee College of Music and thanks to my music background I got in. At college, I was exposed to a lot of things that I never even knew existed and stopped playing drums and moved onto creating electronic music and engineering. For my senior thesis, I wrote a program that translated brainwaves into data could be used to create music and got into a lot of interesting studies about the benefits of music on people, but more specifically the elderly. It was not the focus of my thesis but was something that kind of stuck in the back my mind.

After graduation, I was going to get my masters and continue the work on brainwaves but had an interesting situation to go to Los Angeles and get involved with a studio that was run by a Grammy-winning engineer. I packed my bags and moved up. About the third year there I was now working at a music college and getting burnt out on the scene and what I was involved with. I really wanted a change and started to work on some platforms and apps, but none of them were really inspiring or helped anyone in any way. That’s when everything came together and I had a life-altering conversation with my dad. He plays for senior facilities around San Diego and we were talking about the experiences he was having and for some reason, this conversation just stuck with me. That night I couldn’t sleep as the conversation just kept playing through my head. I got up researched the rest of the night. I was looking into performers for senior facilities and companies that provided entertainment. To my surprise, there was very little in that realm. There were some websites here and there, but mostly just splash pages that would have some contact info and most had very high prices that I knew most locations couldn’t afford. I spent a few more weeks researching and reaching out to locations and realized that if I was to do this it was going to have to be a full-time commitment. I again packed my bags and moved down to San Diego and started Senior Care Entertainment Intl.

Great, so let’s dig a little deeper into the story – has it been an easy path overall and if not, what were the challenges you’ve had to overcome?
The reason that I moved back to San Diego to run SCEI full time is that of the nature of the platform and the people involved. One of the reasons musicians do not like performing for senior facilities is because of pay structure. Most facilities pay on a net 30 or 60 which musicians absolutely hate and I had implemented a pay structure for next day pay. This was something that I really believed was a core component of the platform, but quickly backfired as I ran out of funds within two months. I was at a crossroad of either I pull this component or I go and get a day job to cover the cash flow. I ended up getting a job at a grocery store to cover the cash flow. It wasn’t great, but what was needed.

There are a lot of challenges in this venture as it is kind of an uncharted path so new problems always arise, but it is really satisfying knowing that you facilitated bring high-quality music to seniors.

Senior Care Entertainment International – what should we know? What do you guys do best? What sets you apart from the competition?
Senior Care Entertainment Intl. is a platform that connects professional, vetted, and specialized musicians to senior care facilities. Anyone handling entertainment for the facility(usually activity directors) is able to book directly on our site, phone, or email. We also have generated recommendations for facilities based on their resident’s requests.

At a surface level, this seems very straightforward but actually has many components running together in order to run smoothly. For the musicians, we take care of all paperwork and payment so they only need to worry about getting to the performance and focus on bringing engaging music. For the facilities, we make sure that there are no cancellations and if there is any fall through we take care of it making sure that there is musical entertainment for the allotted time.

What we are known for and sets us apart is first and for most customer service. “Platform” is a catchphrase that everyone associates with being able to click on a button and a service appear. This works with a lot of different industries, but with senior entertainment, there are a lot of specialized requests/needs that we take a lot of time and effort to address.

What we are most proud of is being able to bring high-quality music to seniors that enhance their experience.

What moment in your career do you look back most fondly on?
The proudest moment would have to be one of the first performances facilitated through the platform. I wanted to experience first hand what this experience was bringing so I went to the facility and sat in the back and watched something magical happen.

The facility was a little dark and the residents were very elderly. They were all sitting around a TV not really watching and some of them wandering around. It was not a great environment and a bit depressing. I sat down and one of the residents walks up to me. She was probably in her mid 80’s and had on a sleeping gown with gold slip on shoes that my grandmother used to wear. She handed me a card and it was her daughter who had written to her telling her that she hopes her well and loves her. It was maybe two sentences, but when the woman sat down she read it over and over then put it on her heart. You could see the sadness in her. In the corner was man that was in a chair covered in blankets and couldn’t move. I was told he used to be a musician in the 50’s.

The performer introduced himself and began to talk about the songs he was going to play and if any of the residents remembered the songs. Some of them raised there hands and one told a story about meeting the writer of the song. You could feel the mood of the place start to brighten. The performer played a few songs and then on the forth one the woman with gold shoes got up and started clapping with a big smile on her face and a few moments later the man in the chair rose up and started to bob his head and tap his foot to the beat. That was a really powerful moment and one that showed me what we were doing was good. 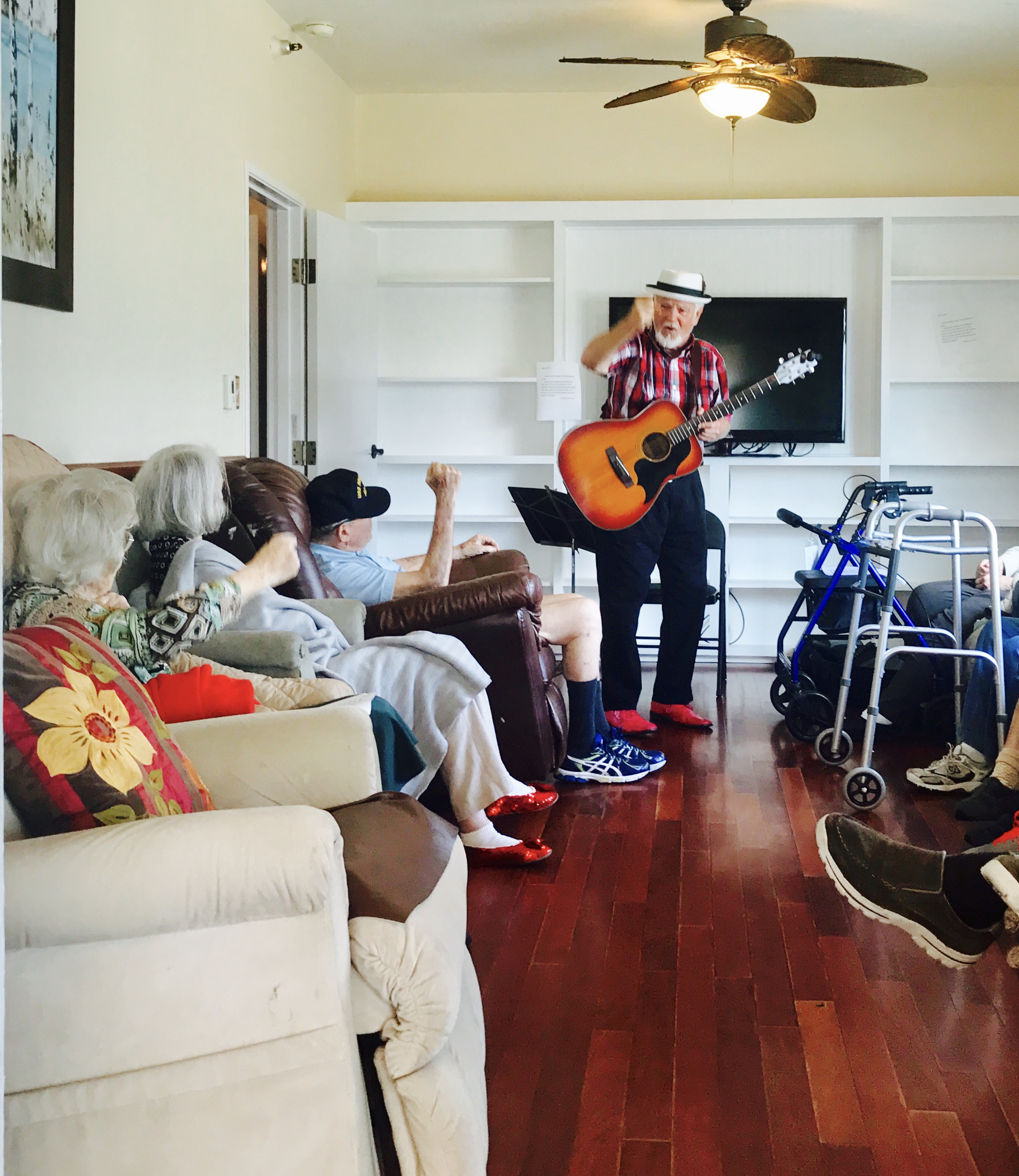 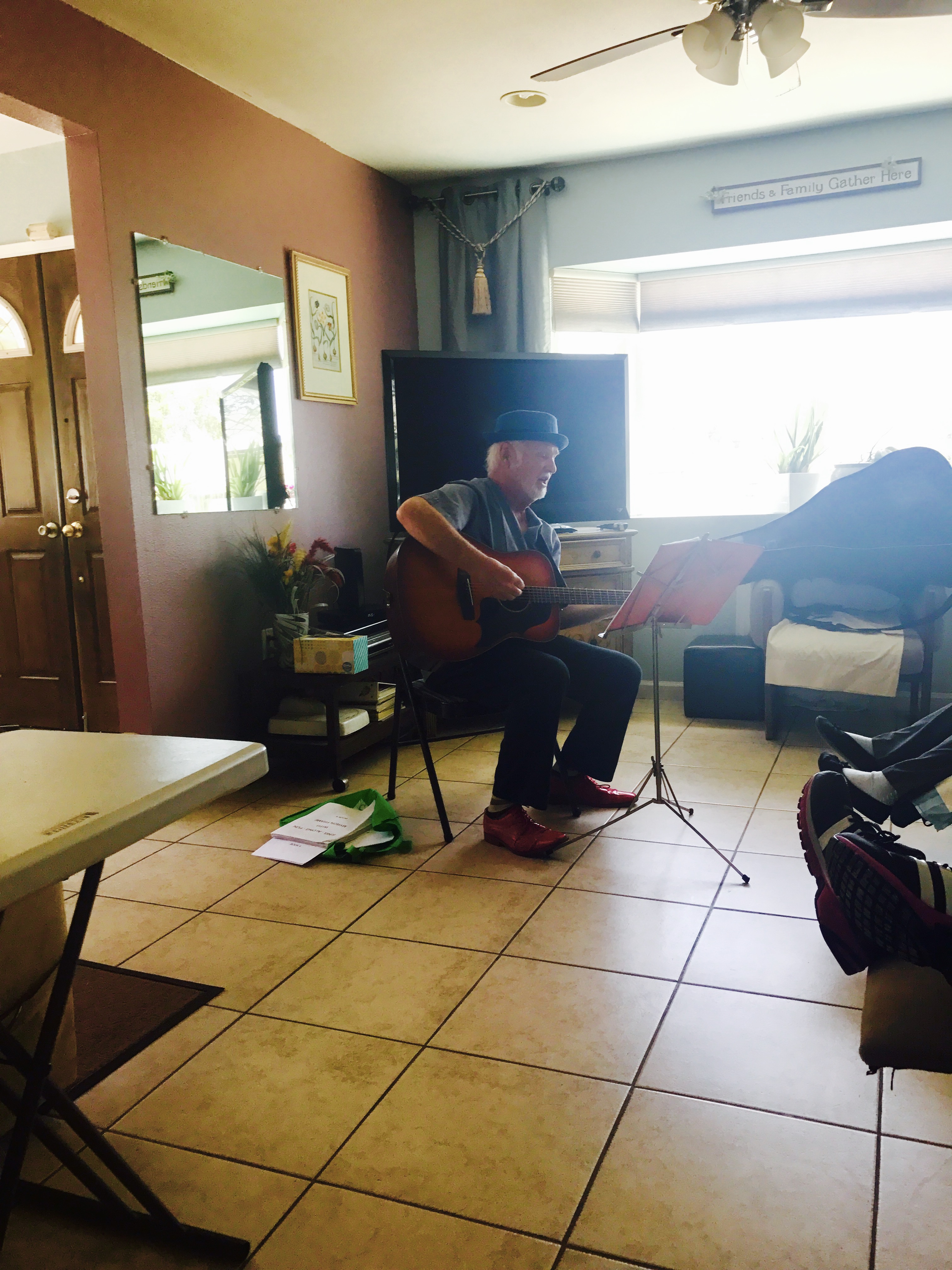 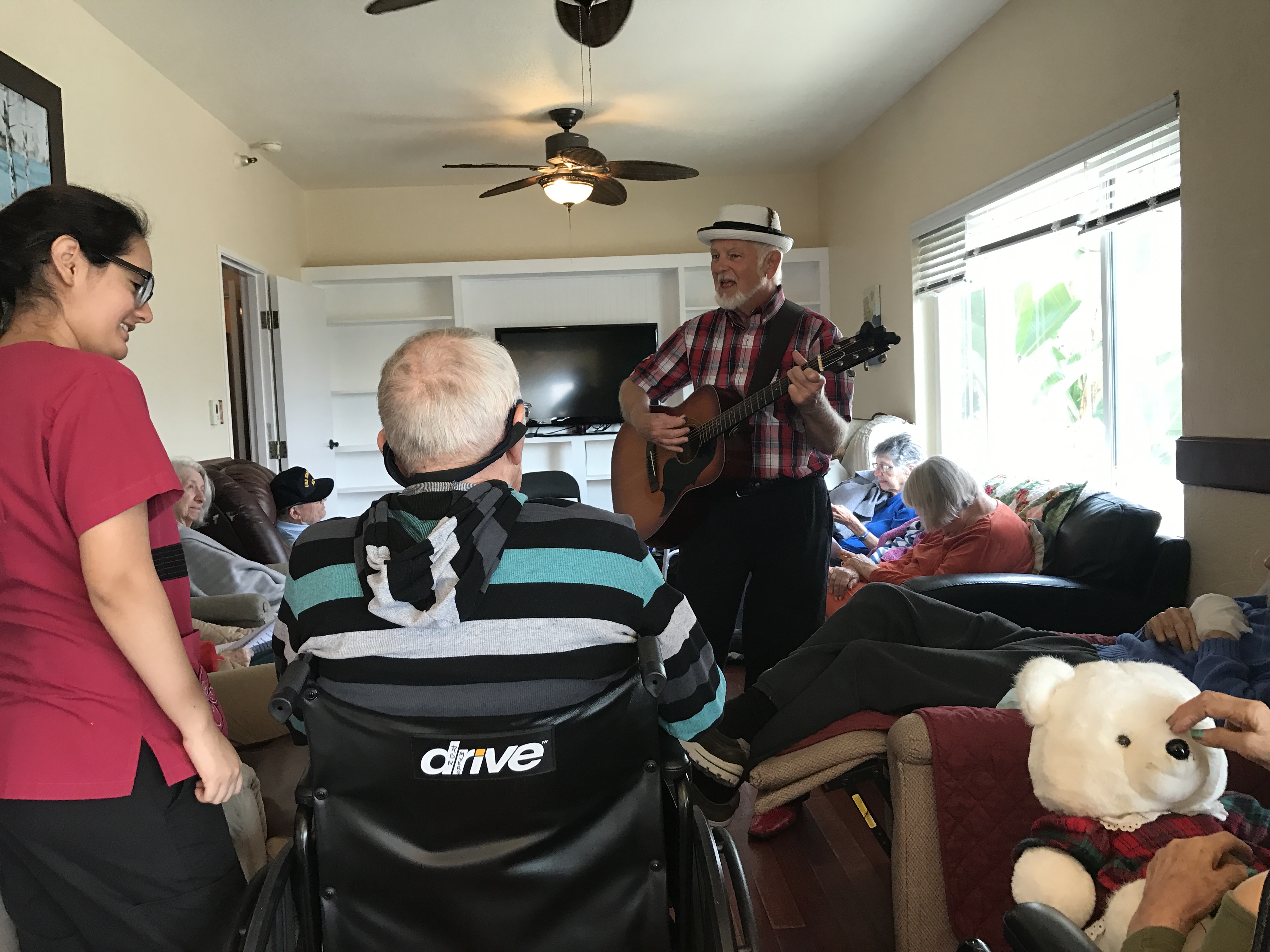 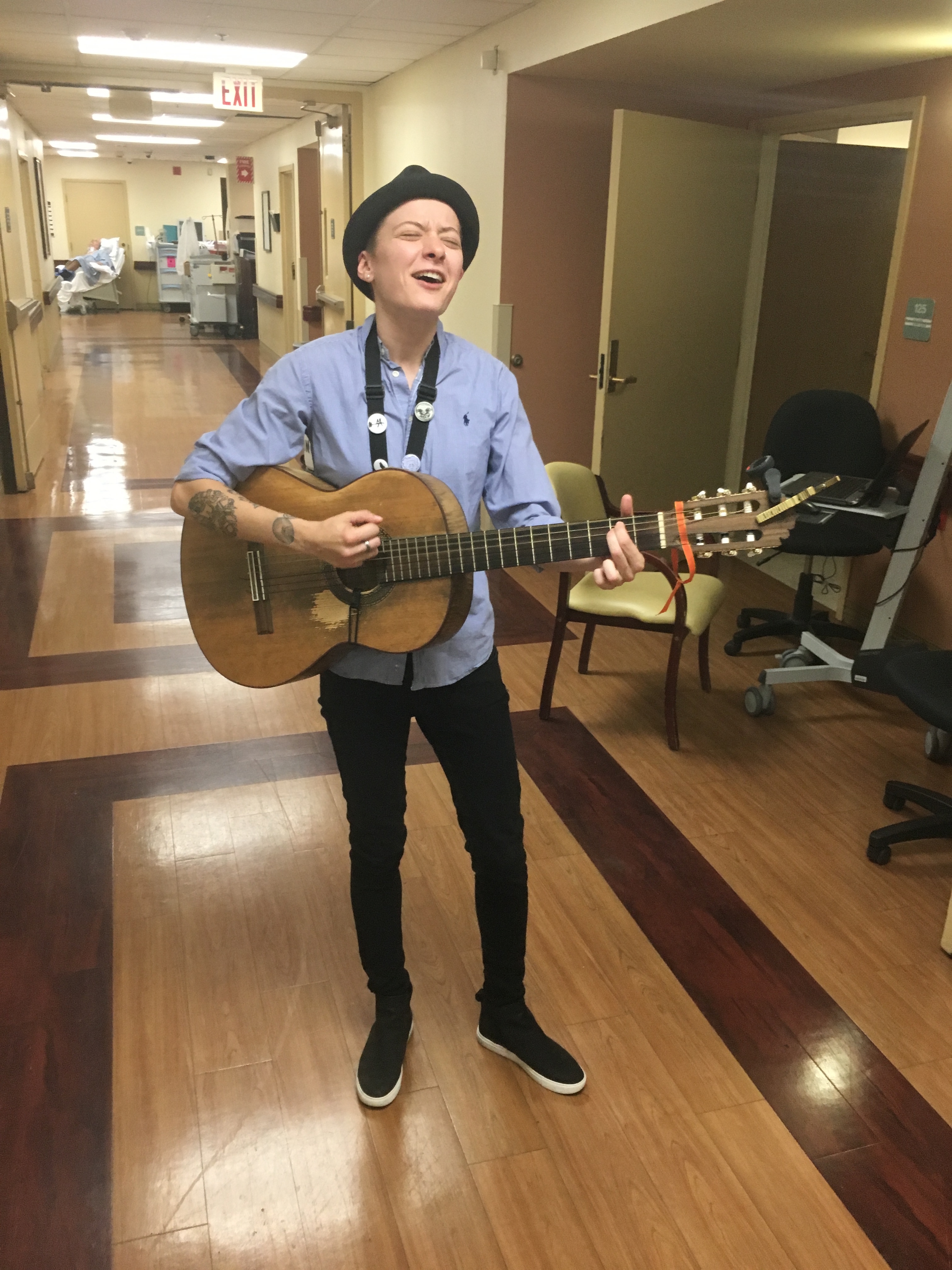 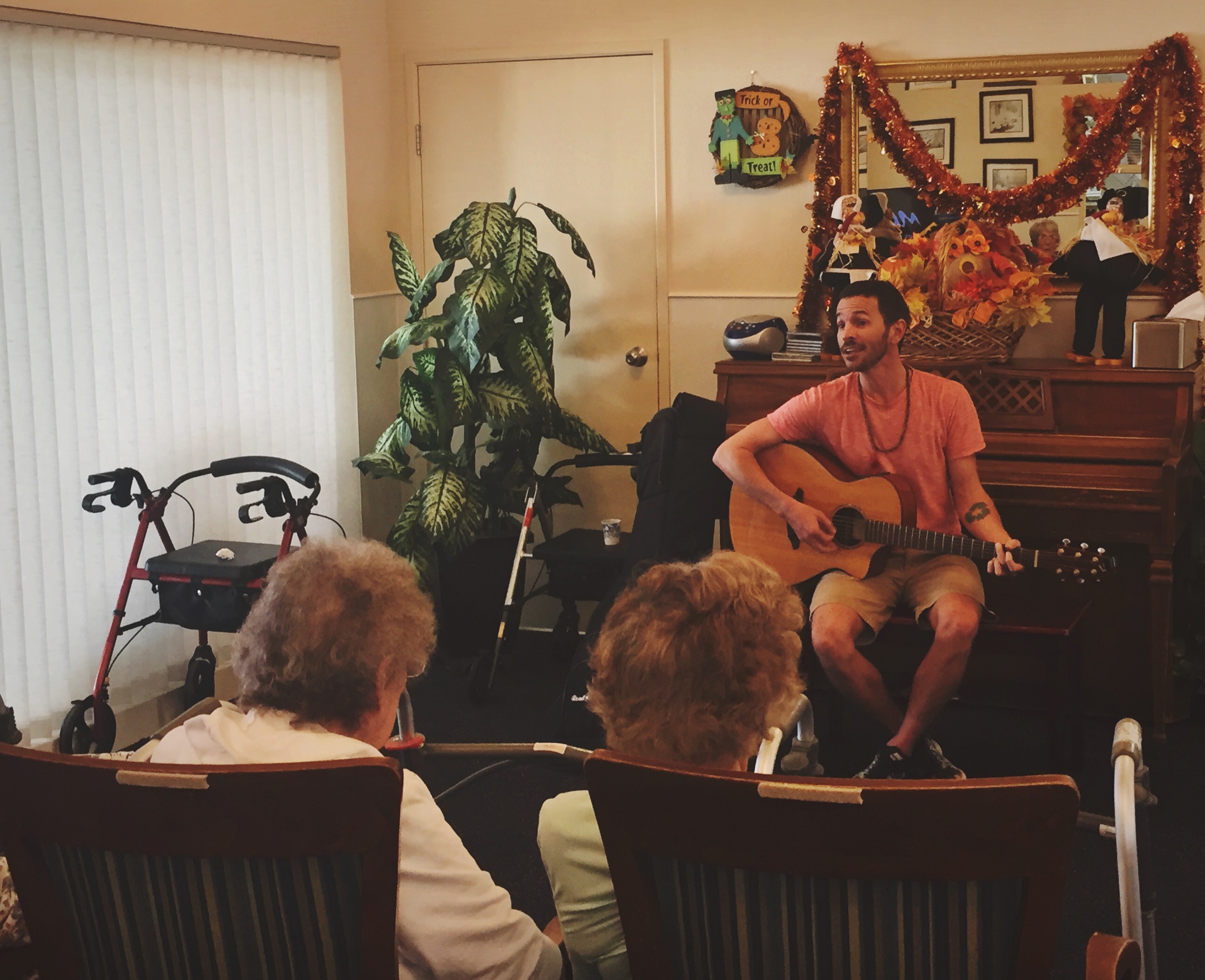 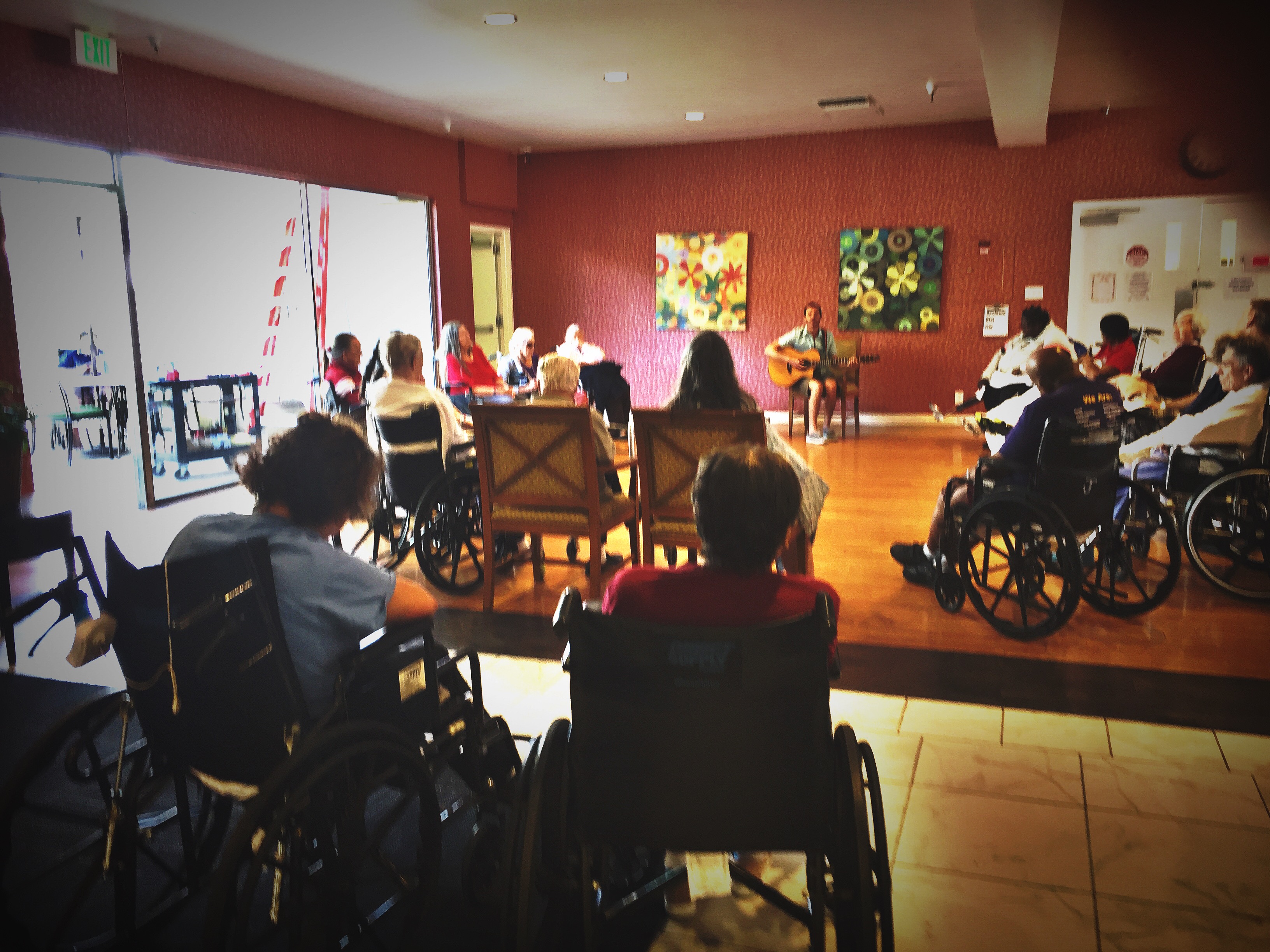