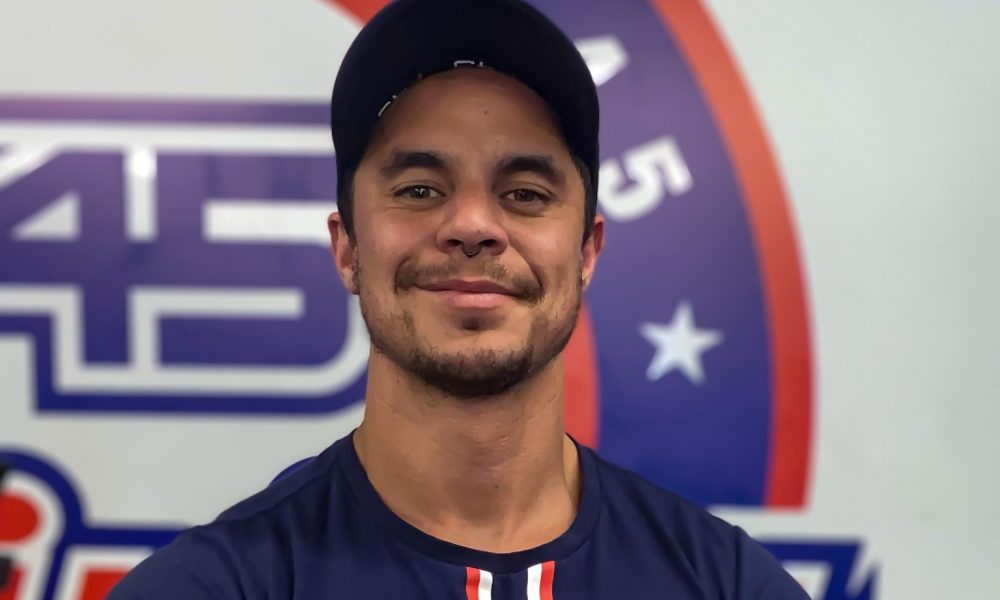 Today we’d like to introduce you to Jason Durrant.

Hi Jason, we’re thrilled to have a chance to learn your story today. So, before we get into specifics, maybe you can briefly walk us through how you got to where you are today?
My story has taken me all around the world, starting from nowhere and nothing, to now living this life I could have only dreamed about. I attribute it all to the people I have met along the way and just throwing my goals out into the universe. I left Australia in 2014 on a holiday to Thailand and knew I wanted to stay there. I told this MMA camp that I would train at that I wanted to work there, and hassled them enough that they created a job for me. After a couple of years, I some how found myself in Barcelona, Spain opening my own business which was a macronutrient focussed cafe- The first of it’s kind over there.
This opportunity left me at rock bottom- Divorced and forced to sell out of the business that I created after just 1 year. I had a friend from Thailand that I stayed in touch with who had opened up the F45 Training Studio in La Jolla and the same night that I sold out, I sent him a text to let him know. He asked if I wanted to come over and manage the studio and the next day I’d booked a flight to San Diego (which I needed my brother to pay for because I had ended up in a lot of debt as a result of that experience)
The day I stepped off the plane, I took over management, learning everything as I went, in a business that I had no background experience in. After a year, I had grown the business and the culture and had a lot of people that knew me wanting to invest in opening up my own studio. Things didn’t workout with that studio so I ended up working at a different F45 and had started my mission of opening up my own studio.
After about a year, I had reserved the Coronado Territory with the F45 franchise and was in the process of opening it when we had to give it up for certain reasons. I found myself meeting my now business partners, and while they were in the process of opening up the F45 studio in Carlsbad Poinsettia, things had gone awry with the operating partner of that studio and they asked if I could step in, so me and my fiance found a place in the north county to move into, and all in the 1 week, we moved, got married and opened the studio!
We grew the studio fairly quickly and built an amazing community, all in the peak of covid. We created an escape for people who were locked up in their houses as well as a place for them to meet others, moving our workouts into the parking lot. Less than a year later, my business partners had one of their other studios (in Carlsbad La Costa) failing, so I took over that studio, and within a couple of months, we took it from being at a massive loss, to a profitable studio.
The biggest “come full circle” moment happened just 1 month ago, where that Coronado territory ended up being taken by my current business partners, and after 2 years of that studio also struggling, I then got asked to partner in that studio and help to make it grow. That studio that I was first going to open up as my own, which felt like I had missed my opportunity by having to give it up, ended up after 2 years becoming my 3rd studio in much better circumstances.
I now have ownership in 3 fitness studios, am married, have a 7 month old baby and 2 puppies. I literally wake up every day and just look at my family and think about how blessed I am to live the life I live

Would you say it’s been a smooth road, and if not what are some of the biggest challenges you’ve faced along the way?
It has been an extremely challenge journey. When I first moved to Spain, I had no idea how to set up or run a business, and then I was given 1 week to open the doors while not knowing how to speak Spanish or know how anything works in that country. This set the standard of that next year of business, where by the end, I ended up going through a divorce, found out that our business was built from illegitimate money, couldn’t afford rent without getting a loan from my brother and I was forced to find a new family for my dogs as I couldn’t bring them with me. I was in a dark hole of depression and had been an insomniac for the years leading up to it, so it all snowballed to the point where I ended up having to go to a psychiatrist and getting put on medication (I even had a spiritual healer work on me!) When I eventually found my way to San Diego, there was a much more positive energy, but things were still hard. I wasn’t earning much and sleeping on a bed in my friend’s living room for a few months. The stress came back in and I pondered on the idea of leaving, but had nothing else to go to. My girlfriend at the time (who is now my wife) kept telling me to persist, that opportunities would arise because she knew how hard working I was, and I’m so glad I listened to her because those were the last of my challenges.
When covid came around, I wasn’t phased at all because of the challenges I had already experienced, and that ended up being the most successful and positive times of my life!

Thanks for sharing that. So, maybe next you can tell us a bit more about your business?
I own part of 3 different F45 studios (Carlsbad Poinsettia, La Costa and Coronado). F45 is a franchise so they are purchased and run independently. I was actually exposed to F45 about 8 years ago as it started in Sydney, Australia which is where I was born and raised. I coached at one of the first I think 20 studios (There are now over 3000 in the world). I was only there for a month before I moved overseas and straight away knew I wanted to open my own. F45 Stands for Functional 45 (45 minute workouts). I had seen people like my brother and his girlfriend, who hated working out, all of a sudden falling in love with it and even going twice a day on occassions. I always say that “f45 makes people who don’t want to workout, want to workout”. I believe my personal life goal is to help the people who don’t have access to a healthy life (whether that is lack of knowledge, motivation, finances, etc), not just providing access to people who already more than capable of doing it themselves.
F45 is exactly that. F45 is a short, to the point workout which people find so much more enjoyable than using machines at the gym, which places people in a group setting so they make friends with the people around them. Our coaches are extremely knowledgable, but we have a very casual attitude to us, as we want people to WANT to workout, not come because they feel forced. While on the outside every F45 looks the same, people can have completely different experiences at different locations. We take pride on our ability to get to know every single member, help members get to know each other, make them laugh and smile and yet stack our team with coaches that have more credentials and knowledge of any fitness studio you will go to, so you know you will 100% get results.
We have a free 3 day experience (3 free workouts over a 7 day period) so you can get the full experience. If you love it we have options for anyone, from unlimited training memberships, to low usage memberships and class packs

What matters most to you? Why?
I learnt from a very young age by luck (I have always had a job from when I was 11 years old) that work can be enjoyable, and if that is what I am going to spend the majority of my time doing, then I want it to be something that I love doing. I have always gravitated towards work that I have enjoyed, and as soon as I didn’t I was quick to quit. Becoming an entrepreneur was something that I never proclaimed myself as, I purely wanted to do exactly what I wanted to do. So the only way that seemed to be possible was to run my own business. My current businesses I have created the culture of a place that I enjoy turning up to every day. I employ people that I personally get along with, and tell them that they run their classes how they want to because if they love being there, then our members will love being there, and then everything around me is positivity. I have literally worked 60 hours or more every single week for the last 2 years that I have owned these businesses and I actually find it strange to say that’s how many hours I “work”, because I CHOOSE to do it, and enjoy doing it 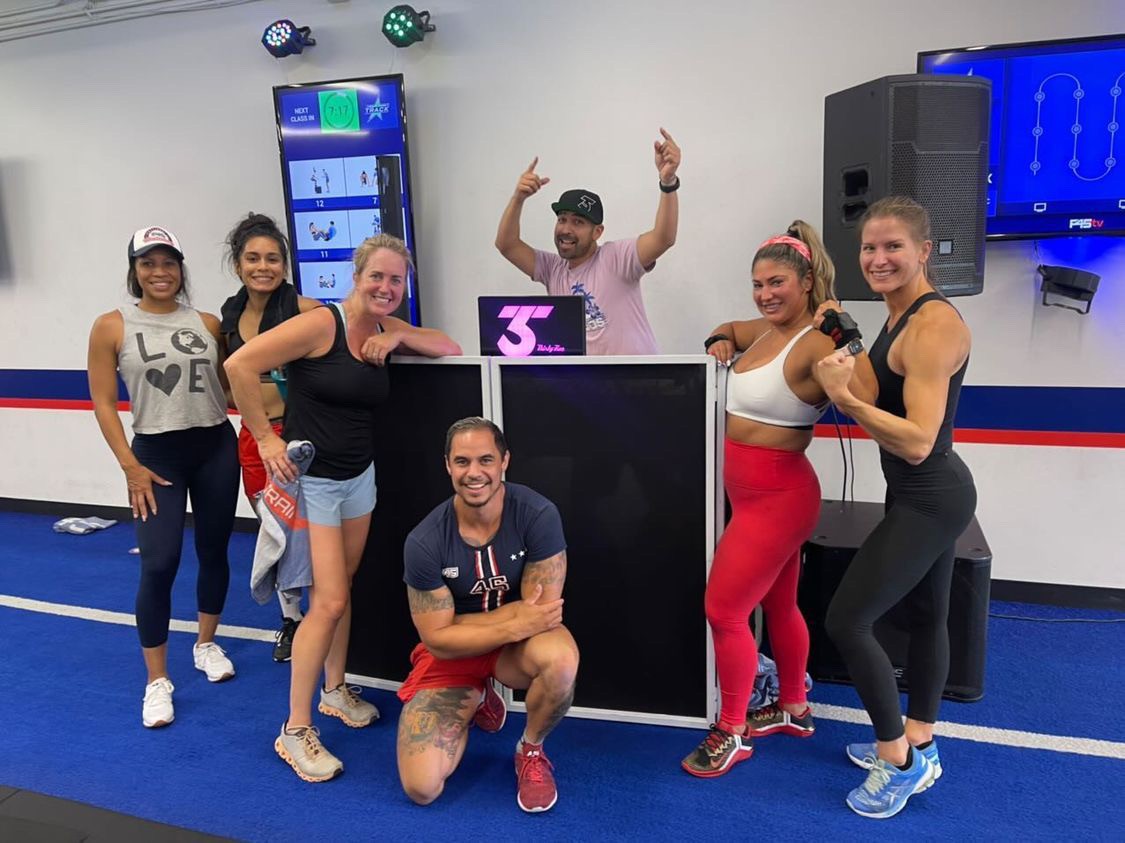 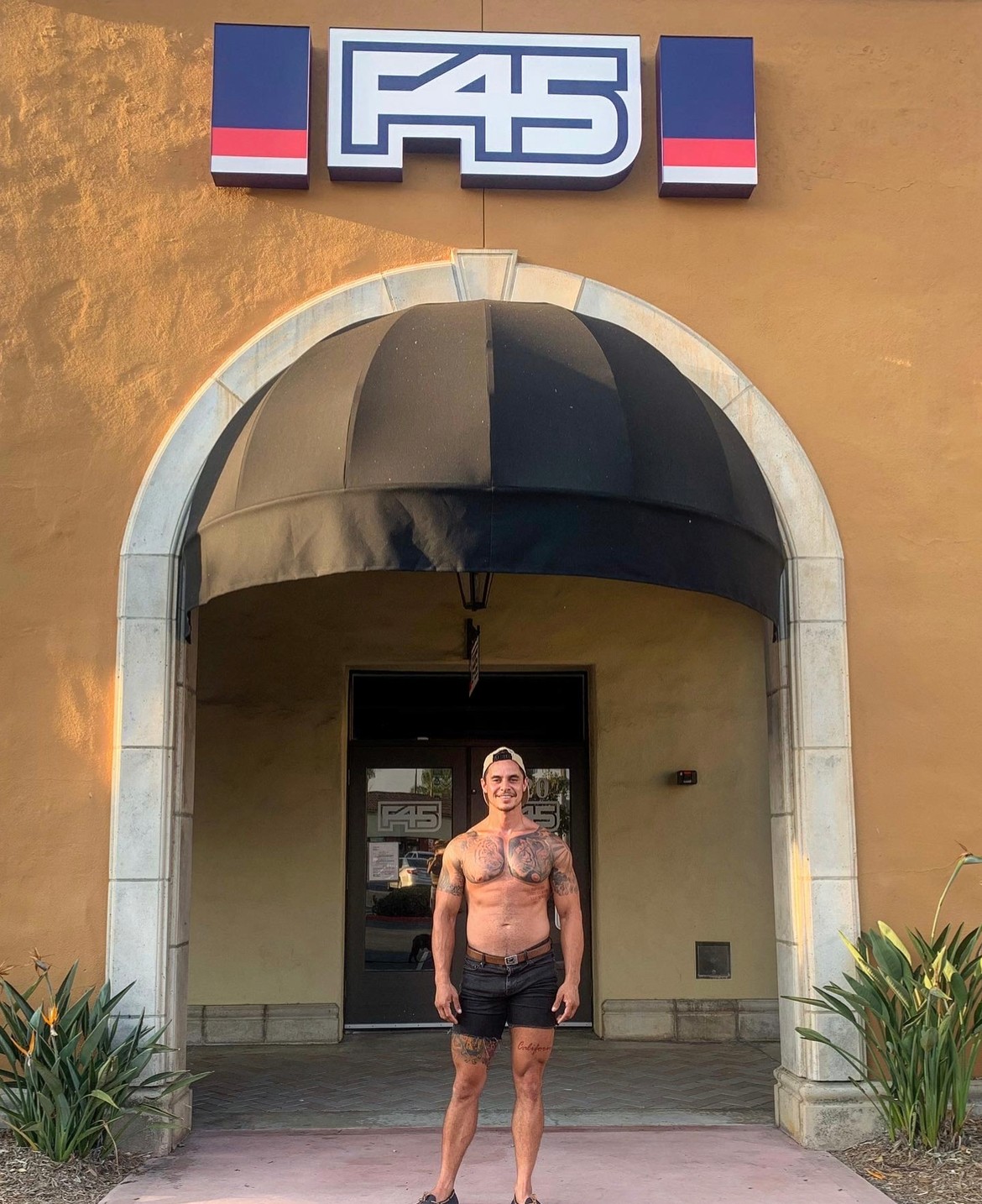 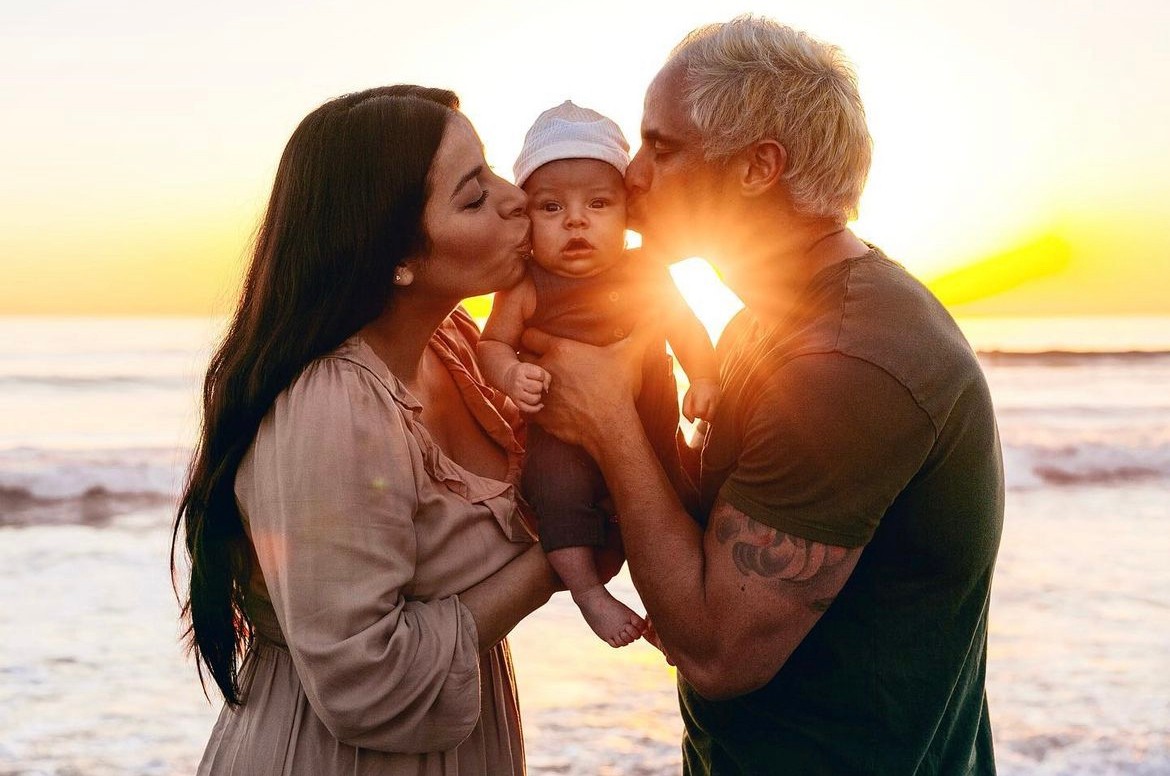 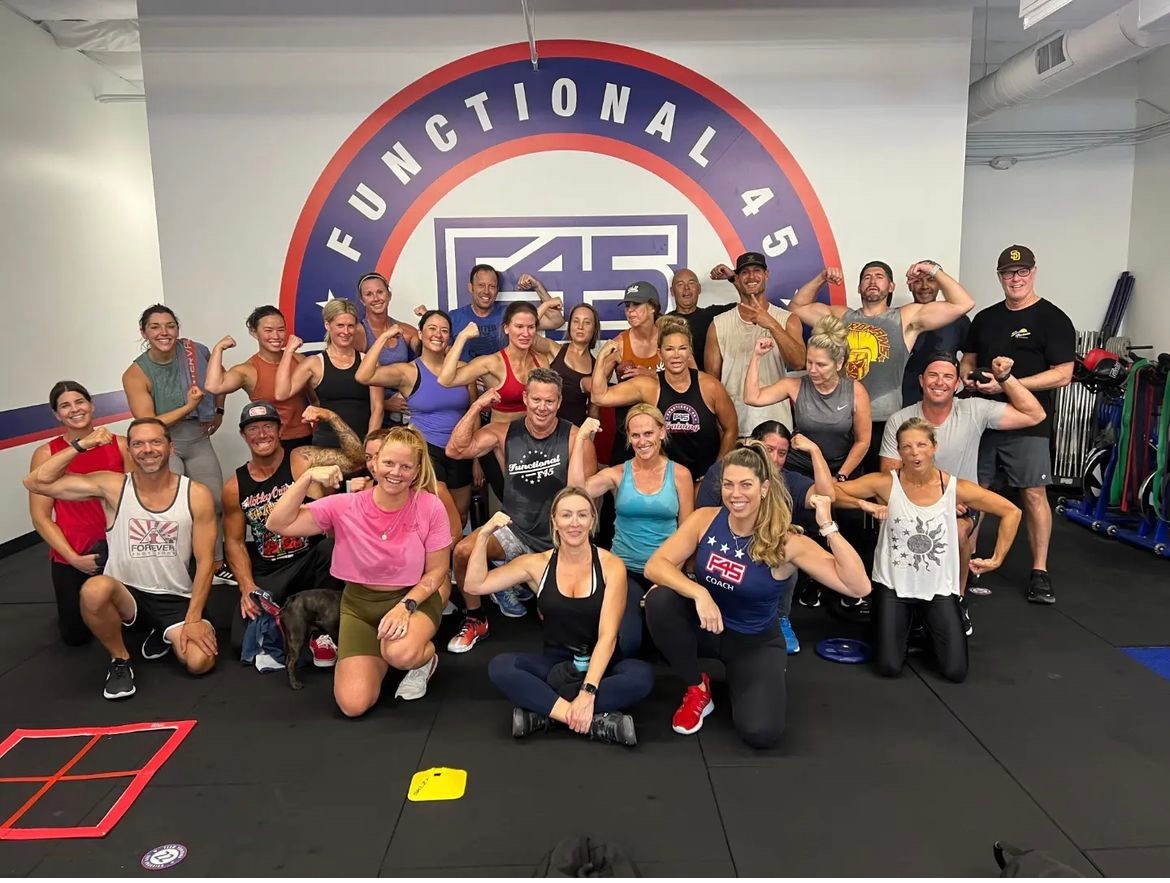 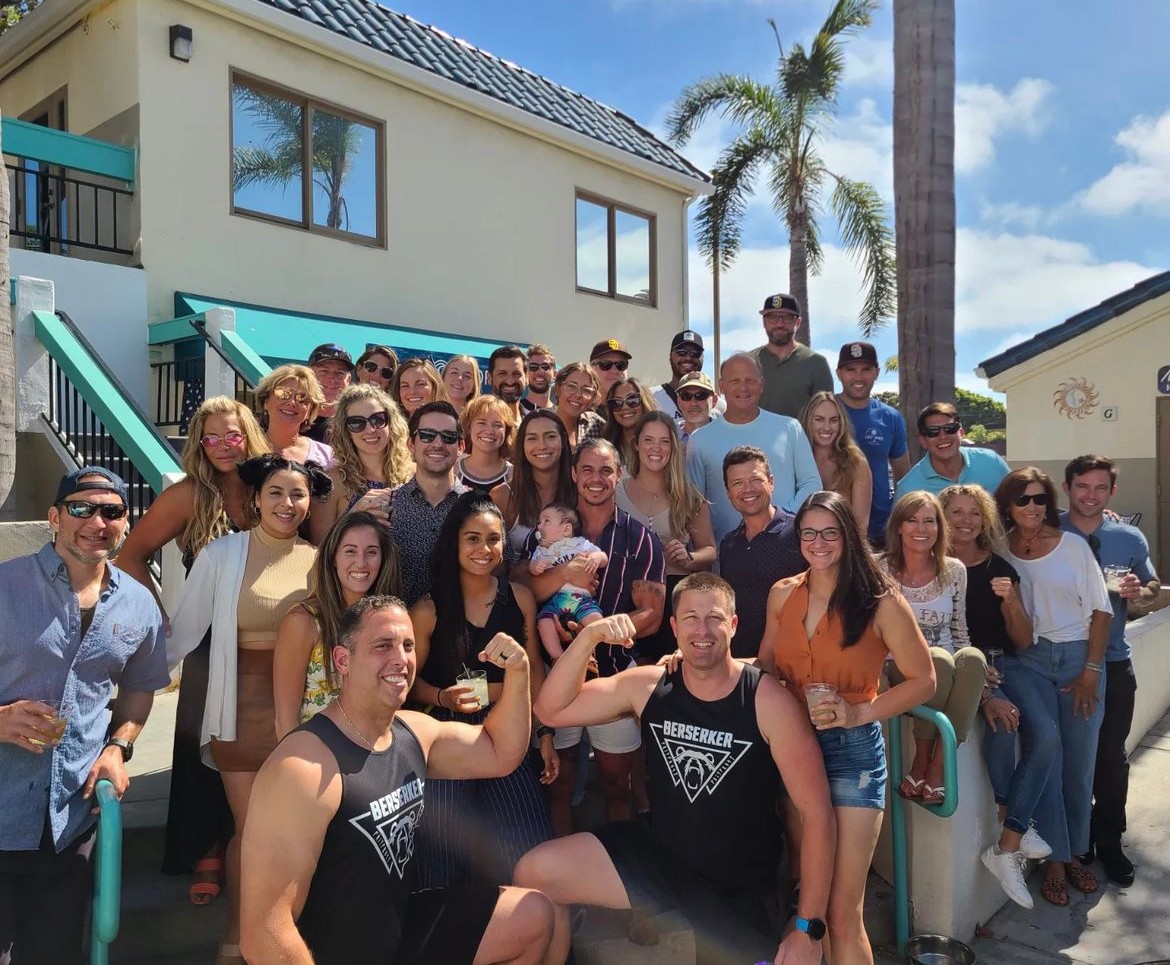 Image Credits
Photo of myself, my wife and my baby- Levi Molina