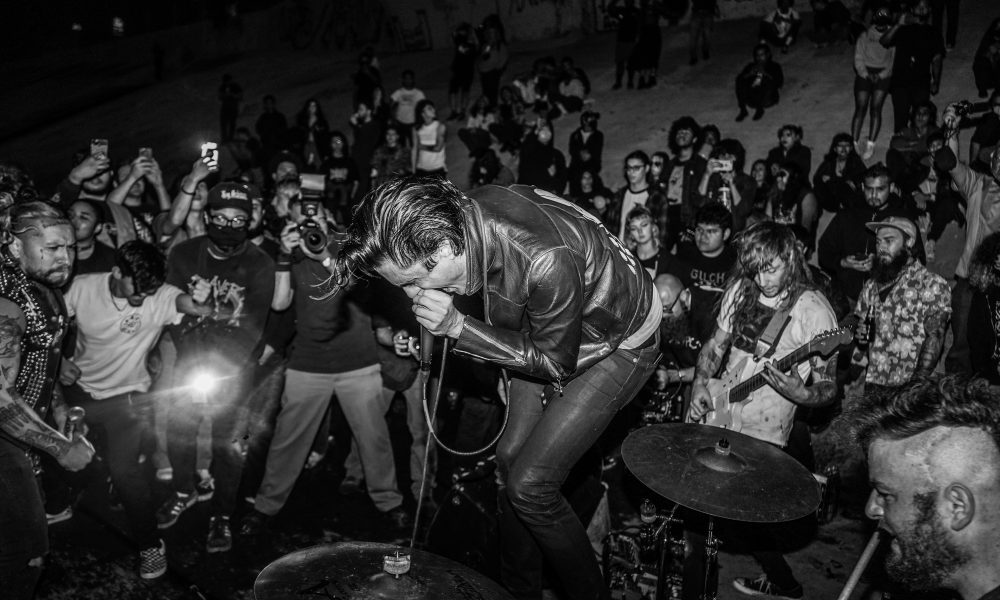 Today we’d like to introduce you to Justin Pearson. Them and their team share their story with us below:

When thinking of the prolific musician Justin Pearson as an artist, there are a multitude of bands/projects one can look to, each of which his presence as a bassist/vocalist is distinctly felt alongside the immense talent of the countless others he’s worked with. The most well-known of his long resume is probably The Locust or, most recently, Dead Cross. The Crimson Curse, Some Girls, Holy Molar, Head Wound City, Retox, Deaf Club, Planet B, and Satanic Planet are only some of the others– each unique but also unified in their intensity. He has collaborated in various capacities with an array of artists including Mike Patton, Martin Atkins, Dave Lombardo, Kool Keith, and Satanic Temple co-founder, Lucien Greaves.

This fervency goes well beyond playing music. He is also the owner of Three One G Records, started in 1994. The goal of the label was to create a family of sorts, one that is dedicated to quality, both sonically and aesthetically. Since then, it has served not only as a label to represent some of the aforementioned bands he personally has been a part of, but also the likes of such influential bands as Antioch Arrow, The Blood Brothers, Arab on Radar, Bastard Noise, Cattle Decapitation, and Metz, among many others. Over twenty years later, the label has managed to continually raise the bar for these expectations, constantly adding to the lineup and coming out with new, innovative releases in an industry that many have argued would not be able to survive.

In 2010, Pearson further expanded his list of talents by becoming a published author with the release of “From the Graveyard of the Arousal Industry”. This was followed in 2011 by “How to Lose Friends and Irritate People”, and a comprehensive collection of his lyrics titled “The Race to Zero” in 2018. With the exception of your everyday reality show television stunts (now infamous), Justin found himself acting for the first time in 2013 under the direction of Asia Argento and alongside Charlotte Gainsbourg for the film “Incompresa”, of which he also contributed to the soundtrack. The film premiered at The Festival De Cannes in May 2014 under the category of Un Certain Regard. In 2016, he even ventured into the realm of cartoon voiceovers, taking on the role of a vegan snack elf on Cartoon Network’s Uncle Grandpa.

He has also more recently taken on the world of Podcasting alongside co-host and Planet B/Satanic Planet bandmate Luke Henshaw in the form of Cult and Culture, interviewing an eclectic range of musicians, actors, and activists including legendary director John Waters, actor Michael Malarkey, and members of the Black Panther Party. It is clear that Pearson has always and will continue to explore different avenues of expression, reinventing himself and evolving as an artist while simultaneously managing to maintain many of the same passionate beliefs present throughout his career.

Would you say it’s been a smooth road, and if not, what are some of the biggest challenges you’ve faced along the way?
Starting from an early age it has been the complete opposite of smooth. However, the obstacles I faced put me on the path I’m on. Anything from my father saying I would become a drug addict if I listened to punk bands, to my mom destroying my records, to being physically abused by my mom’s boyfriend and getting kicked out of my house at the age of 16. All of that set me on the trajectory that has led me to where I am now.

Can you tell our readers more about what you do and what you think sets you apart from others?
On paper, I suppose I am considered a musician. However, I have no proper musical training and for the most part, I have no idea what I am doing or if it is scholastically “correct”. Therefore, I tend to call myself an “artist”, which sounds a bit pretentious when I say it, but considering the fact that I have written and published multiple books, acted in TV and film, and started an independent record label when I was 19 and still “successfully” run it, I co-host a podcast, and consider myself a prankster and an activist, I think musician may sell me short.

As far as what I’m most proud of, there are quite a lot of things. Anything from The Locust starting a riot in the UK just for being a band, to being a snack elf on the cartoon Uncle Grandpa. But in all honesty, it’s when I meet someone who is into the music, I am part of and thanks me for saving their life.

And as far as what sets me apart from others, I suppose I would hope everything. But then I am well aware that our entire existence is all intertwined in some way or another. Even the stuff I consider to be garbage artistically or musically is linked to me by the fact that it is what pushes me in a certain direction to be what I am.

Where we are in life is often partly because of others. Who/what else deserves credit for how your story turned out?
My mother has been the obvious person who deserves credit. Starting with the fact that she gave birth to me and put up with me until I had to put up with her. But she also gave me my first bass guitar and drove me to band rehearsals before I was legally allowed to drive myself. And of course, “mentors” or maybe advocates come from all walks of life. The people I get to collaborate with are first and foremost the guts of what I do. But even comrades like Martin Atkins, John Waters, my dog Captain, or maybe people who have inspired my that I have no direct relationship with such as The Weather Underground, or local organic farmers. For me, everything plays a part in what I am and how I am.