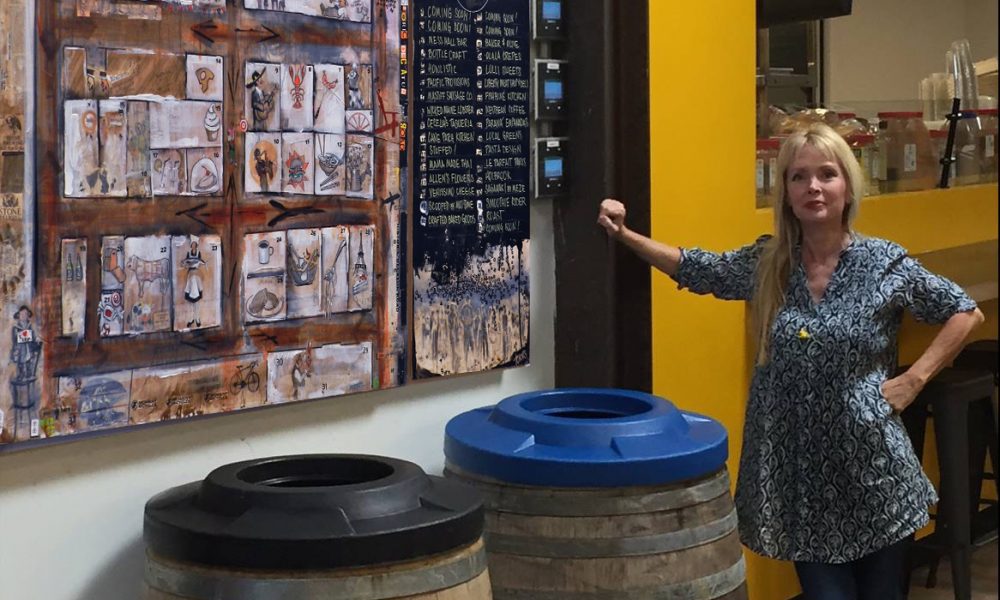 Today we’d like to introduce you to Nancy Tokos.

For the artist, San Diego is an expensive rental market. Finding affordable quality space for them is the key to moving forward. Two years ago, Liberty Public Market started a new chapter in building community outreach. From an art perspective, the marketplace had blank walls. These walls are now filled with original local artwork.

Additionally, this is an outreach to at-risk youth, the military and academic community, Liberty Station tenant artists and non-profits. Hard work and luck turned a single solitary exhibit space into an opportunity for over 100 exhibit spaces for as many artists! Liberty Public Market’s inaugural General Manager was Josh Zanow with Blue Bridge Hospitality Restaurateur, David Spatafore.

Zanow approached their next-door neighbor, Nancy Tokos, about exhibiting a few paintings inside San Diego’s first marketplace. That went pretty well, so more spaces were made available, Nancy added more artists. Two and a half years later, 25,000 sq. ft of blanks walls are now covered with over 100 original works of art from talented San Diego artists! Now we have a real art exhibit. How did Tokos get to where she is today?

Overall, has it been relatively smooth? If not, what were some of the struggles along the way?
The decision to include fine art within the vastness of 25,000SF space was organic. The original Mess Hall walls exhibited hand-painted battleships and these wonderful paintings are still there! This creative idea continues to evolve and expand. But, I suppose if you want a story about struggle, filled with the drama of a woman fighting a desperate battle against incredible odds, how about buying a concrete nail or concrete drill bit at the hardware store. For a girl, it is one steep learning curve!

The former Naval Training Center (and specifically The Mess Hall) was constructed in 1923. Accessorizing walls for the new Liberty Public Marketplace 7-day-a-week art exhibition was left to Tokos. Hanging systems were provided by Blue Bridge Hospitality but the he-man installation was left to 95 lb. Nancy and the one 5’3″ staff maintenance man, whose nickname was not Hercules. The Mess Hall walls were not only concrete but CURED concrete and hardened through the ages. Drill bits, screws and nails could be purchased but old concrete developed its own personality; it either crumbled away or refused to take a nail.

Then came the finishing touch of recognizing each artist with Museum-quality biographies. Hello, humidity & heat from 30 open kitchens! Remember, this is a marketplace, not climate controlled Louve. Layers of paint often rejected all brands of double stick tape and silicon. Nancy persevered and found success securing card holders and biography frames with Command Strips, only to have Marketplace guests bump against them & crash to the concrete floor. There was more than one Pity Party, believe me.

Alright – so let’s talk business. Tell us about TOKOS WORKING ARTIST STUDIO – what should we know?
Nancy Tokos is a Southern California impressionist artist and works directly with collectors from her studio next door to the popular Liberty Public Market, 2770 Historic Decatur Rd., San Diego U.S.A. Enjoying painting from her studio for 6 years, Tokos has been dubbed “Liberty Station’s portrait artist.”

Collectors around the world have commissioned Tokos for her “Norman-Rockwell-inspired” portrait oil paintings but many pass her studio to peer inside and gawk at Brad Pitt, Marilyn Monroe, Johnny Depp, Winston Churchill, Elvis, Frida Kahlo, Abraham Lincoln or Martin Luther King, Jr. The Southern California tourist seem to enjoy oil paintings of silhouetted beachgoers lounging in striped canvas beach chairs next to the ocean.

Nancy had a 30-year career in another creative field: designing Emmy Award-winning primetime American television programs in Hollywood. Now … painting and drawing makes Nancy come alive. A big expansive view of the Pacific Ocean serves as the morning alarm clock from her home where she lives with her husband. Member: Oil Painters of America and American Impressionist Society.

Any shoutouts? Who else deserves credit in this story – who has played a meaningful role?
Art has given Tokos a great life. She has enjoyed the return to classic arts and standing in front of her numerous easels with a paintbrush following 30 years designing television graphics. But she began as a 5-year-old drawing with a box of crayons on her playroom floor. So in many ways, life has come full circle.

Who else deserves credit? Her spark happens when talking to aspiring artists. The less experienced they are, the closer she listens. Her favorite quote, after all life’s ups and downs, remains: Luck is hard work that bumps into opportunity. Curating the big art exhibit inside Liberty Public Market is a great creative opportunity for so many local artists just because it builds a stronger more vibrant San Diego arts community. It is because of this, Tokos volunteers her time and talents … and then walks across the courtyard to paint in her studio. 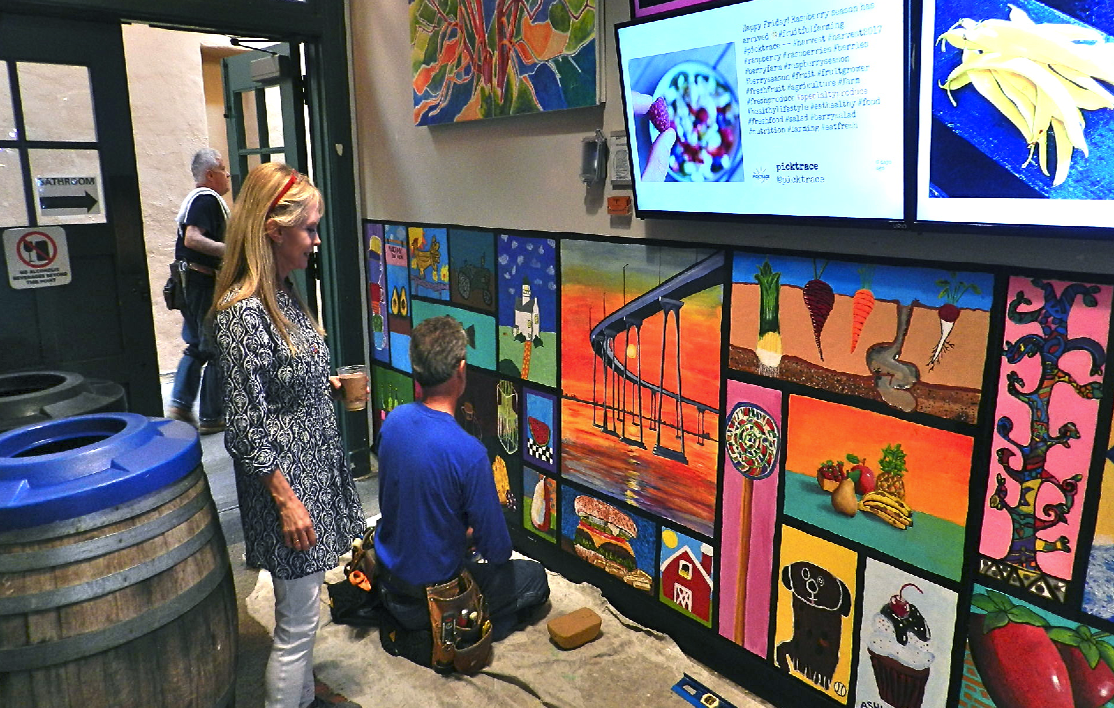 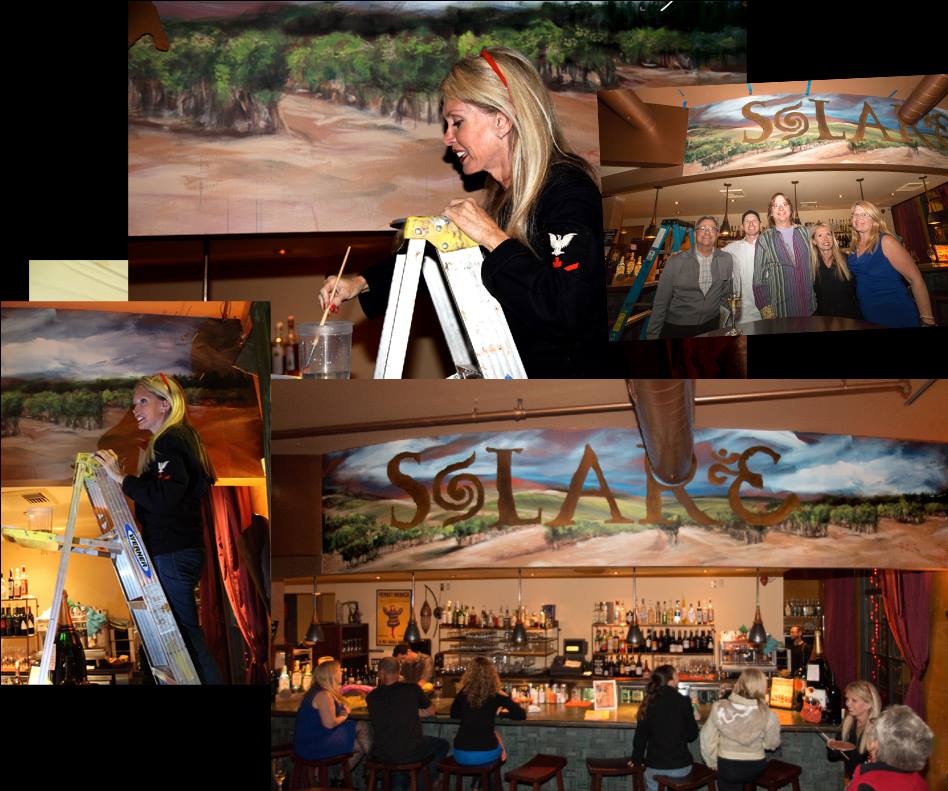 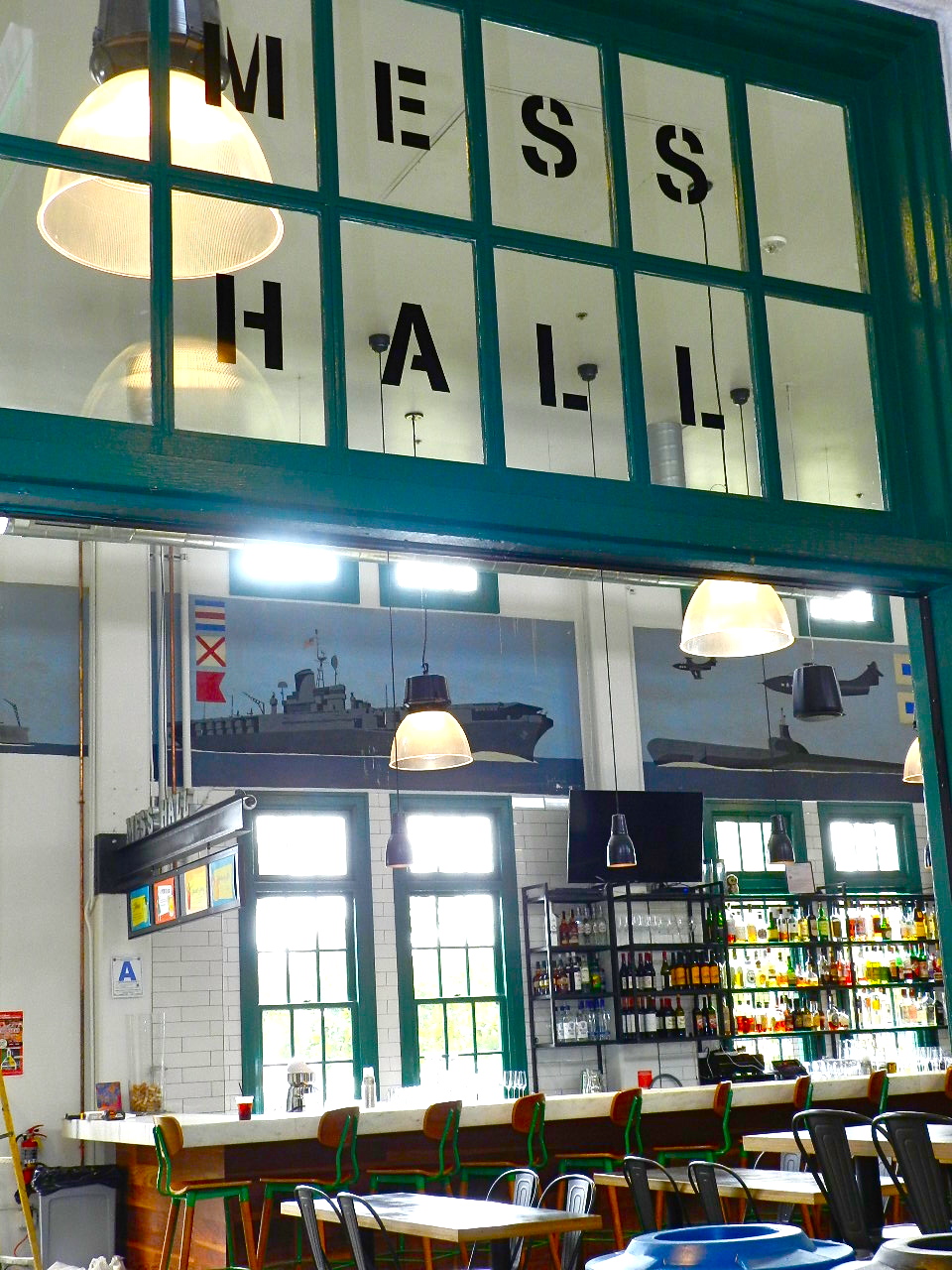 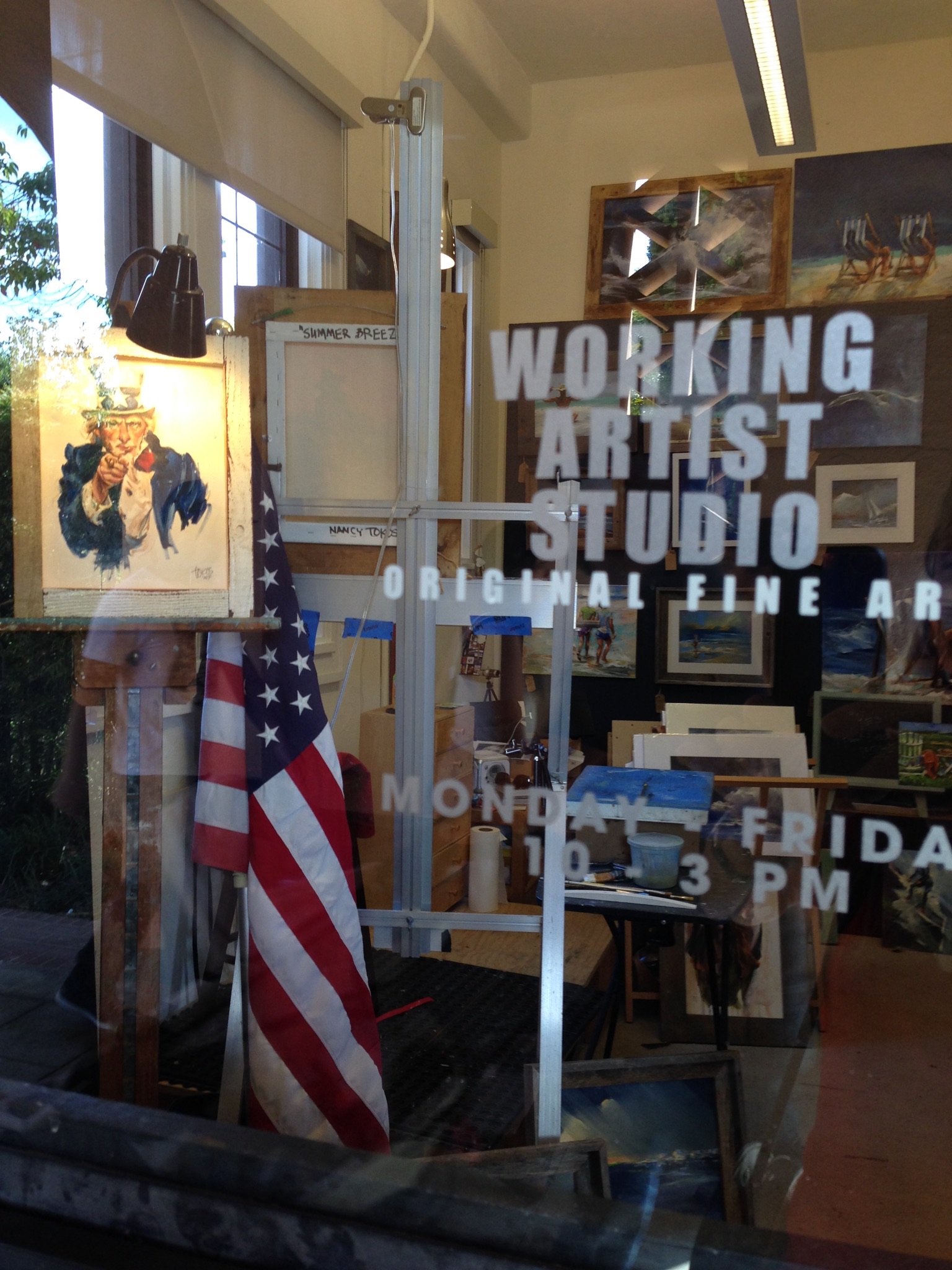 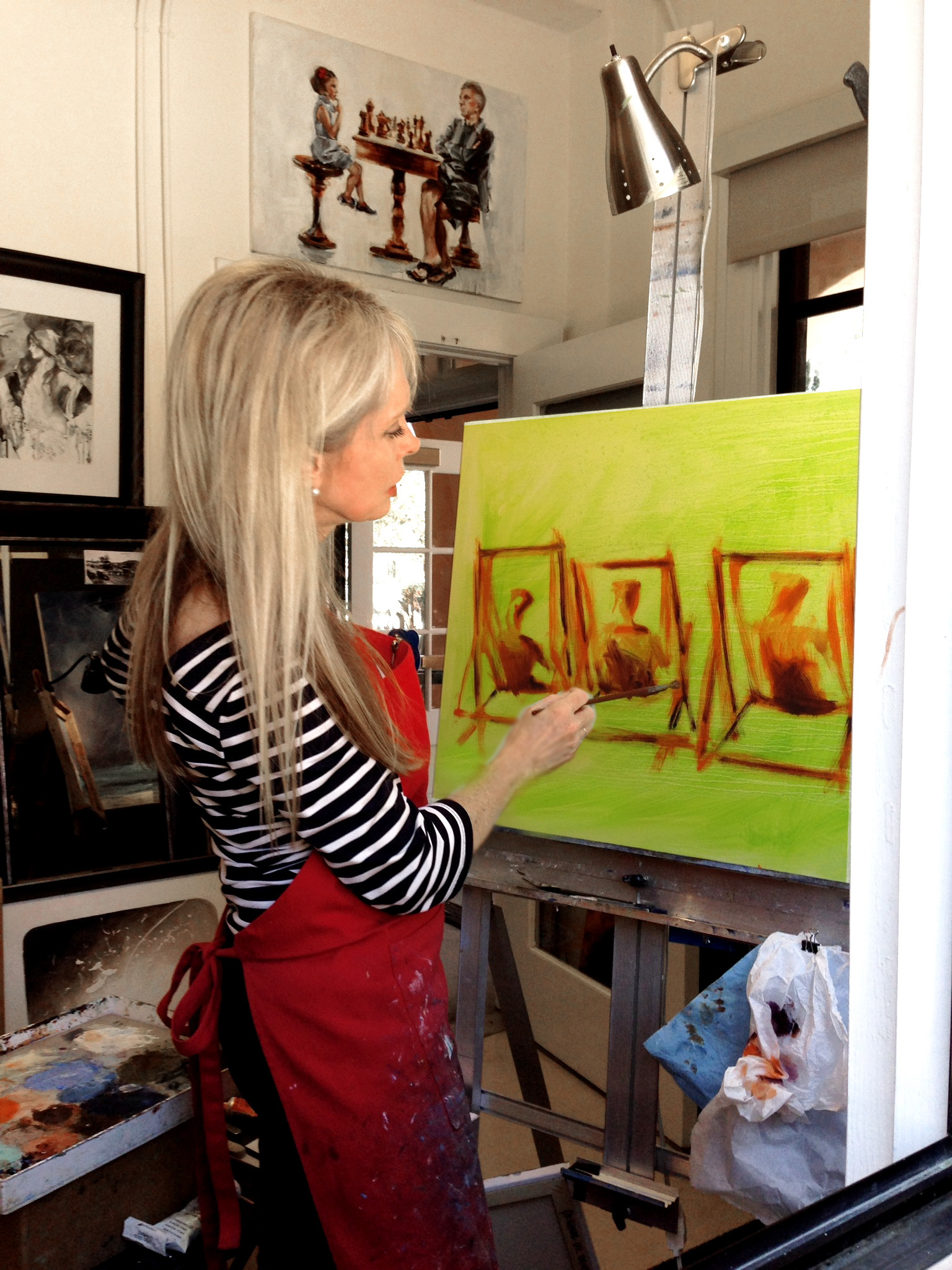