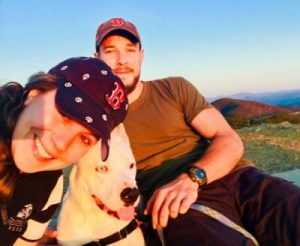 Today we’d like to introduce you to Rebecca Vaudreuil.

Rebecca, can you briefly walk us through your story – how you started and how you got to where you are today.
My parents tell me that I have been a musician since I was a baby. They used to know when I was awake in the morning or from my naps because they would hear me singing in my crib. Whether or not we, as a culture, identify baby’s cooing as music, we can certainly recognize that music can soothe, self-soothe, and soothe others, dating back to the 1600’s when English playwright, William Congreve, stated, “Music has charms to soothe a savage b(r)east…”

Perhaps my first memory of music was in singing in church. Even before I sang in the choir, I remember singing with the congregation. My Memere (grandmother), who was for lack of a better term, completely tone deaf, loved to sing all the hymns and she knew them word-for-word. I used to feel embarrassed, as she would sing so loudly and confidently out-of-tune. One Sunday I mustered the courage to ask her to sing a little quieter, to which she replied, “I am not singing for you or for me, I am singing for Him, and I will sing out!”

It was then I realized that it was not the pitch of the note, the harmony (or dissonance) of voices together, or the product of the music, it was the meaning, the feeling, the PROCESS of making music that mattered the most. Thus started my journey to gain a deeper understanding of the human connection to music. Throughout my childhood, I sang in the church choir, school chorus – back when music programs existed in schools, and with my family and friends.

I sang with my mom, who has the voice of an angel, and I realized as a child that when my mom was humming or singing, she would oblige if I asked to play a little longer before doing my homework because when she was singing, she was happy! I aspired to sing and be happy like my mom. My father is a professional musician who graduated from Berklee College of Music in Boston, MA. He used to tell stories about busking in Boston and gigging around the state and country.

Since then, I had always dreamed about going to that school and having the ‘rock-star’ experiences I vividly imagined in my mind when he talked about his ‘glory days’. So, naturally, as a proud Massachusettsian, when I was ready to do the ‘college thing’ I went to Berklee. Rewind the tape… a lot happened between when I was a child and a young adult to shape my path of becoming a music therapist. One of the most poignantly enlightening experiences for me was in 2000 when my Memere was dying and I made her a mixtape of her favorite songs – spirituals, classical music, Nat King Cole – and brought her the tape and a cassette player and placed it by her bed in the hospice center.

I don’t know why I made her the tape, I didn’t know what it would do or if it would do anything, and I certainly didn’t know that music therapy was an actual profession used in the end of life care. But she loved the tape, and I learned from the caretakers at the hospice center that she listened to it all the time. We played it when she was dying, and it was solemnly beautiful. That was the next BIG step in my journey of learning about music and its therapeutic value, ultimately, discovering the field of music therapy and becoming hooked!.

So, fast forward a few years and I am a student at Berklee College of Music, fulfilling my dream of becoming a music therapist, studying under some of the best professors in the country, Karen Wacks, Dr. Suzanne Hanser, to name a few. Upon completion of music therapy coursework, a 1200-hour internship is required before becoming eligible to sit for the board-certification exam. My professors asked me where I wanted to intern and I remember saying, “I want a program that will challenge me, and I want to be in California – in the sunshine and by the beach. I was recommended to apply to MusicWorx in San Diego, a company founded by Dr. Barbara Reuer.

In 2009, I was accepted for the internship, moved to San Diego, and it was a dream come true, a dream with depths of which I was completely unaware. During the internship, I got the opportunity to work in hospitals and ICU’s with people spanning from premature infants to older adults. I worked in special education classrooms, in substance abuse rehabilitation programs, and in a neuro-rehabilitation residential facility for traumatic brain injury (TBI), It was at the neuro-rehab center that I met a United States Marine Corps Sergeant who was recovering from a severe TBI. We started working together, and I discovered depths of music therapy that I didn’t know existed.

Once again I was hooked, but not to music therapy – I was already hooked to that – I was hooked to using music therapy with service members and veterans to help them (re)connect to their families, their communities, and themselves. My uncle was a Vietnam Veteran (RIP Uncle Gene), and when he returned from Vietnam in the early 1970’s, his homecoming was nothing short of undesirable. Unlike the historic ceremonies of Medieval times for returning Crusaders or the homecoming celebrations that many contemporary Veterans have experienced since 2001, my Uncle’s re-entry was met by a cold, unaccepting community.

He turned to music to find the comfort lacking from his neighbors and he became an amazing self-taught organist. He also told me about how he had taken a guitar on deployment and he and the other soldiers in his unit used to sing and play together to alleviate stress from war. This knowledge, combined with my new experiences of music therapy and songwriting with service members, ignited a lightbulb in my head and a spark in my heart. I knew from that moment forward this is what I was meant to do. The transformation from profession to passion started to take root.

In 2010, I began researching music therapy with military populations and I discovered that although it is very prevalent in the Department of Veteran’s Affairs, ongoing music therapy programs were non-existent on bases and military treatment facilities for active duty service members. Part of what we learn in our training is that, as clinical providers, it is our duty to identify populations that do not have access to music therapy, assess the need, and assist with advocacy for services. So that is what I did. Through connections from my internship program, contacts that we made on base, and support from Injured Marine Semper Fi Fund, I started an 8-week pilot program at a military treatment facility in San Diego, CA and really, the rest is history.

History still in the making thanks to organizations such as Resounding Joy, Inc and the National Endowment for the Arts (NEA). In 2012, the NEA started an initiative to embed Creative Arts Therapists (music, art, dance/movement, drama) on military bases across the country as core members of interdisciplinary treatment teams treating service members and veterans who experience TBI and post-traumatic stress (PTS). To date, this initiative, Creative Forces: NEA Military Healing Arts Network, supports Creative Arts Therapists across 11 sites nationwide, including a telehealth program that supports remote creative arts therapies.

In 2013, after three years of working in San Diego, I moved back east to earn my master’s degree in educational neuroscience and upon completion, joined Creative Forces. My first placement in 2014 was at a facility called the National Intrepid Center of Excellence (NICoE), which specializes in the treatment of TBI, PTS and other psychological concerns on base at Walter Reed National Military Medical Center in Bethesda, Maryland. Working at NICoE, especially with new insight about the brain’s information processing and computing systems reignited my passions and I was able to bring my practice as a music therapist to a whole new level to support service men, women, and their families through integrating music into their recovery processes.

Music is linked to speech through singing and language through processing song lyrics and meaning, it is linked to physical rehabilitation through playing music and being compelled to move to the rhythm, and it is it linked to cognitive recovery, as nearly every part of the brain is activated when presented with music, both appreciating and creating. Recently, I moved back to San Diego County and am honored to continue my work for Creative Forces, be able to again serve the military population of this area, and rejoin the surrounding arts community that supports the military. Organizations such as Resounding Joy, CombatArts and VetArt, to name a few.

It is the hope that over time and through the continued work and impact, that creative arts therapies for military populations will continue to grow, be utilized as a core treatment, and find a sustainable home in more military treatment facilities and across the Military Health System at large.

Has it been a smooth road?
Music therapy, like most Creative Arts Therapies is hard to prove. How do you prove something that you can’t see? Music is measurable in other ways such as frequencies, beats per minute, pitch that allows it to be studied alongside physiological and psychological measurable human characteristics: heart rate, blood pressure, emotion, and sociality. Because of this, music therapy has a strong evidence-base of research across populations- from premature infants to children with autism to older adults with Alzheimer’s disease – to people with TBI.

Although I have experienced some obstacles in demonstrating the effectiveness of clinical treatment, luckily the Creative Forces initiative supports research and I have a great team that I am very fortunate to work alongside!

So, as you know, we’re impressed with Board- Certified Music Therapist – tell our readers more, for example what you’re most proud of as a company and what sets you apart from others.
I am in the business of making people feel positively connected and empowered through music.

Let’s touch on your thoughts about our city – what do you like the most and least?
As a music therapist who works with military populations: active duty service members, veterans, families, and caregivers. I love that San Diego is a warm and welcoming community where many military personnel remains after their service. This provides a strong military and veteran network- both off and on base- to connect with through the arts. 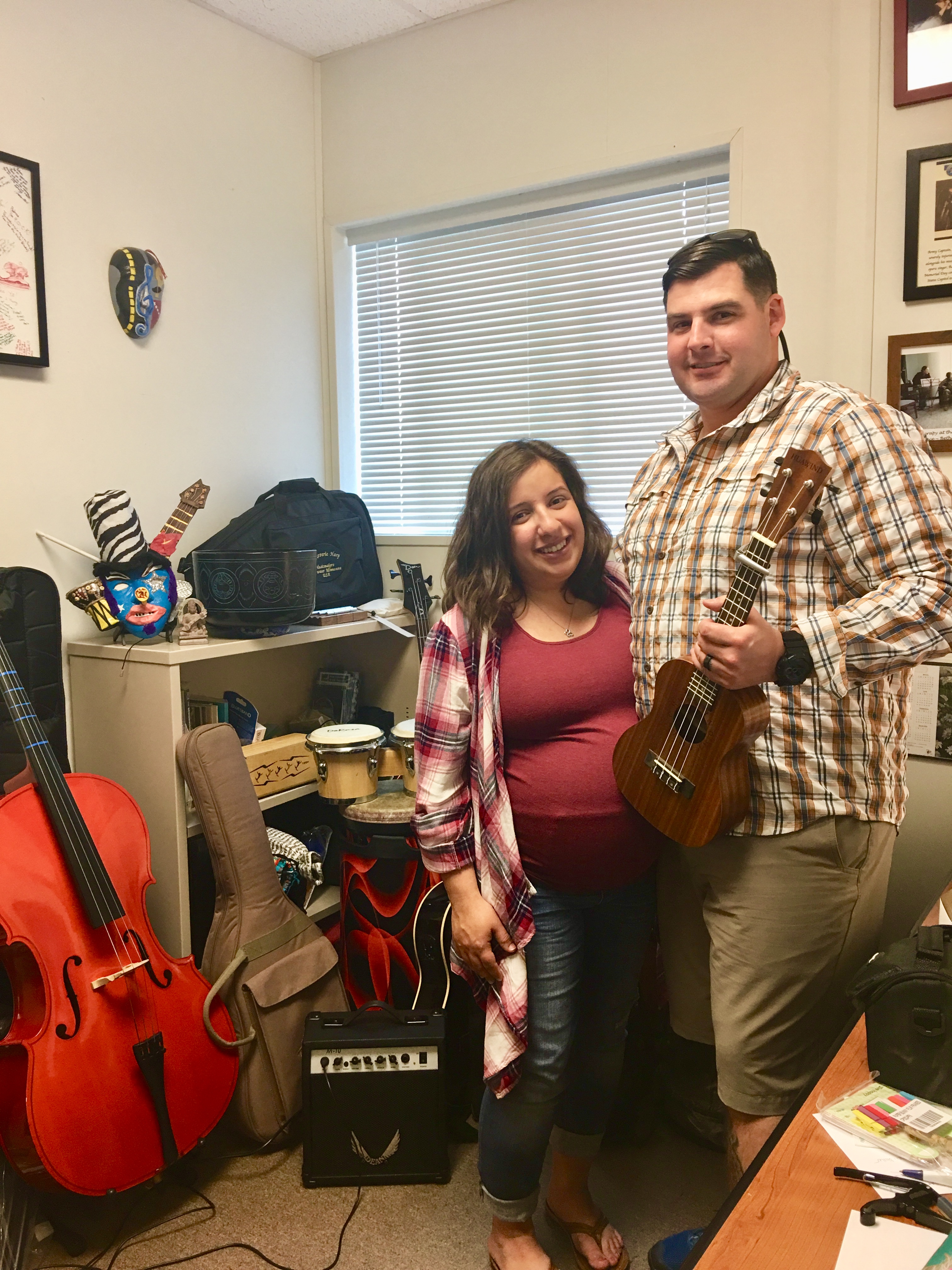 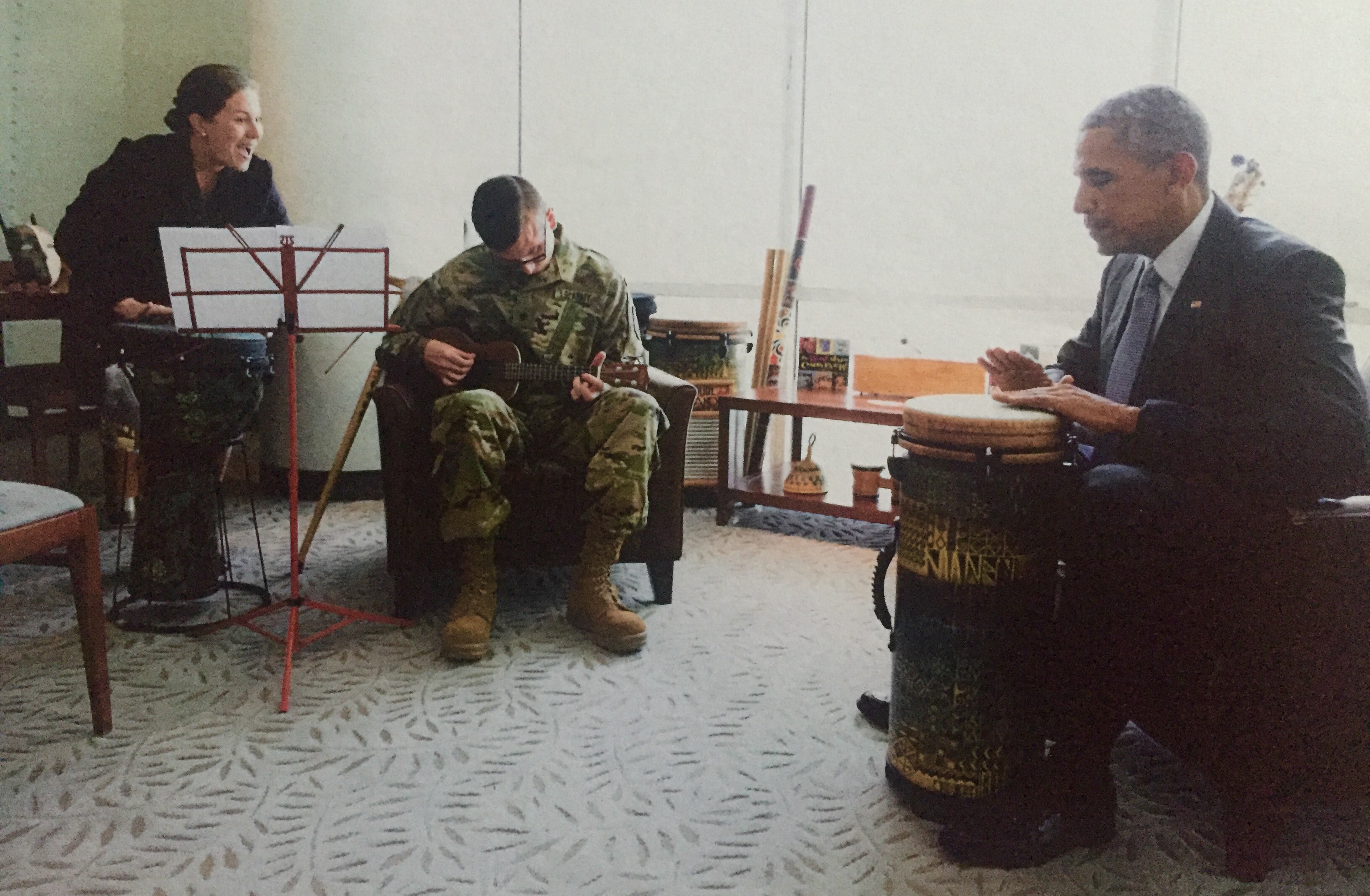 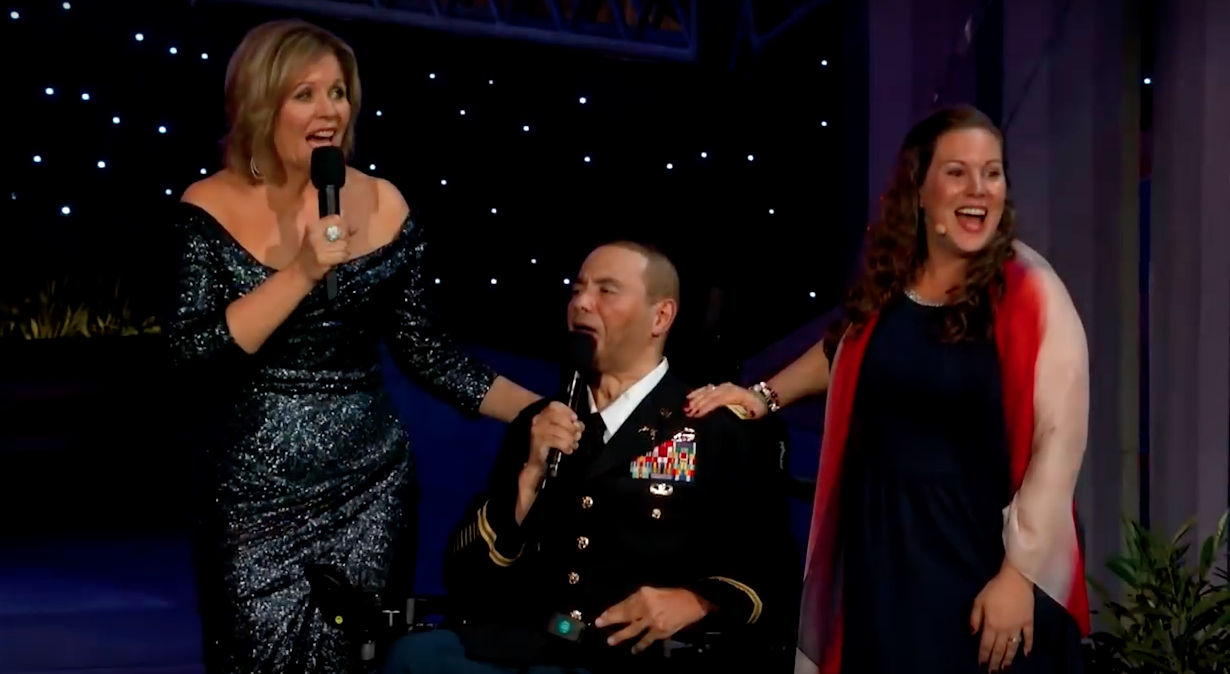 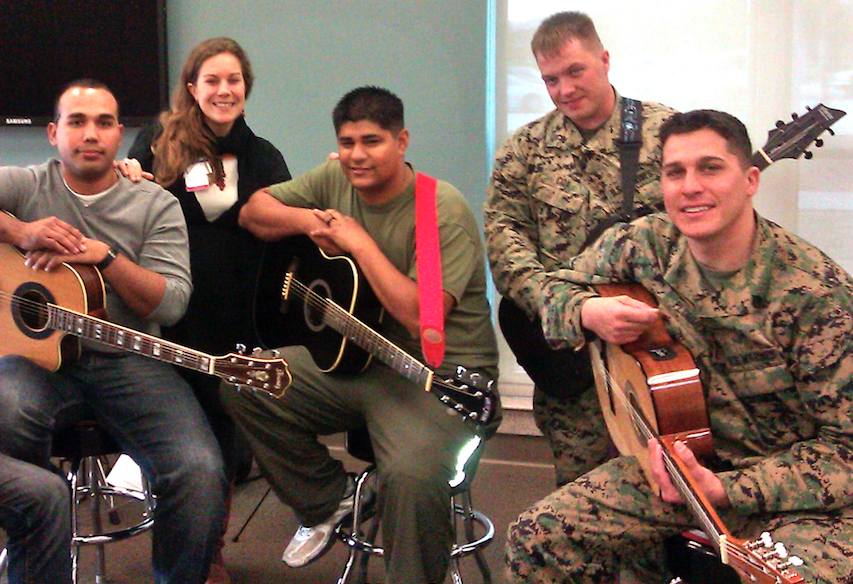