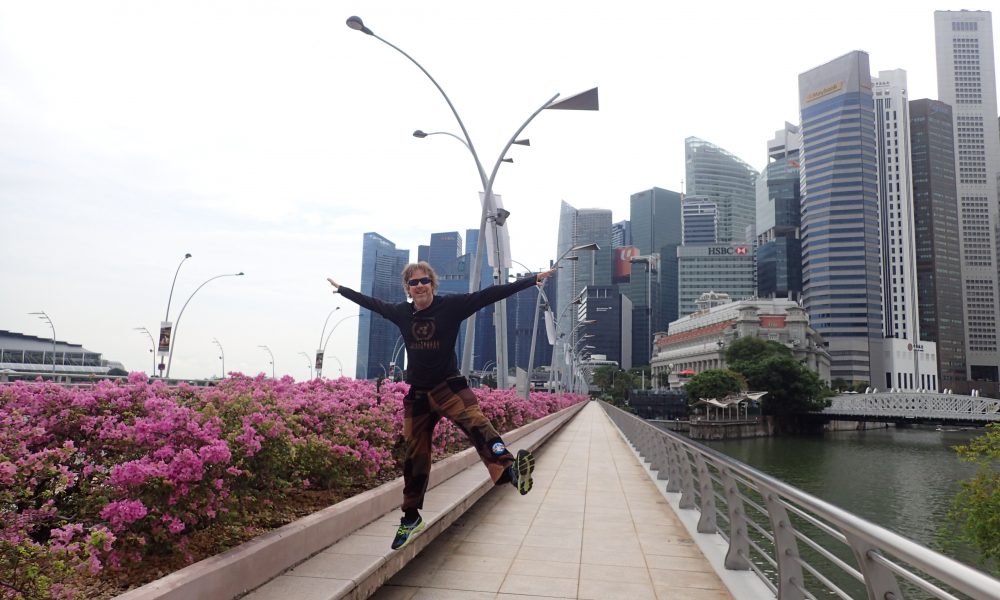 Today we’d like to introduce you to Scott Stephens.

Vocalist of the “World’s Most Traveled Band®” and skater with one of the most prominent roller derby teams of all-time, that’s ROCK and ROLL! In addition to singing and skating his way around the world, Scott’s multifaceted career highlights include founding a rock magazine; operating a successful insurance & financial agency; author; real estate investor; hit songwriter; lifeguard, amateur boxer, yoga instructor and Guinness World Record holder. Scott currently works from his laptop on the road or at one of his three coastal properties. His typical ten-hour workday revolves around managing Liquid Blue and writing. He continues to make time for lifelong habits of surfing, yoga, meditation and reading.

As a young teenager, Scott was typically either body-surfing in the Pacific Ocean or skating on the concrete of the San Fernando Valley. He started roller skating at age 7 and became a fan of roller derby and the Los Angeles Thunderbirds. Before getting his driver’s license, Scott frequently hitch-hiked to the beaches of Malibu. He was an adrenaline freak known for being towed on his roller skates on the Ventura Freeway and riding ridiculously large waves at Zuma Beach. His first job was L.A. City Lifeguard.

In 1976 at age 16, Scott founded Raw Power Magazine, a mostly underground publication covering punk and hard rock musical acts. Raw Power with its young readership, became the darling of L.A. record companies and was granted meetings and access to the biggest rock stars of the day. Scott interviewed the likes of Ozzy Osbourne, David Lee Roth, Iggy Pop, Ted Nugent and many others. His magazine branched into concert promotion and other music-related endeavors until Scott departed at age 20. The company then incorporated and re-branded as RPMC, “the Club-Med of rock & roll,” no longer producing a magazine but become one of the world’s largest and most successful event management companies. The narrative of the movie “Almost Famous” bears a striking resemblance to the story of the founders of Raw Power. During his interview with Ozzy, Scott & Robert suggested he might consider auditioning guitarist Randy Rhoads for his new band. The rest is history.

His first job as a singer was with L.A. based Electric Warrior, a band that also featured eventual Liquid Blue guitarist Michael Vangerov (The Groveler). Michael and Scott were 18 when they started performing together and still perform today as “Two From Blue.” “EW” lasted three years playing parties, high-school dances, and clubs on the Sunset Strip where they once opened for the up and coming Quiet Riot. They disbanded following a tour in Alberta, Canada in 1980. During this period, while attempting to juggle multiple avocations, he racked up over 30 speeding tickets and three license suspensions in a three-year period.

At age 17 he started roller derby training and was taught by legendary Hall of Fame members John Hall and Ralphie Valladares. He eventually became a pro skater with the hometown Los Angeles Thunderbirds. He skated with Roller Games for four years (1978-1981) alongside many of his childhood idols. The T-Birds were the first and only roller derby team to achieve widespread international success. Their home base was the Olympic Auditorium, and most games were televised and shown on either KTLA (13) or KHJ (9) and later on ESPN. Scott participated in sold-out games in Mexico City and San Diego as well as Los Angeles at the Sports Arena and Fabulous Forum. In 1980 he was a member of the Thunderbirds when they won the Roller Games World Series. The book, Roller Derby Requiem, devotes an entire chapter to Scott’s experiences in roller derby.

In the spring of 1981 things came crashing down in Scott’s world. He chose to go with Electric Warrior to tour Canada in the summer of 1980 rather than accompany the Thunderbirds on their excursion to Australia. Following the tour, Electric Warrior broke-up. When he inquired about returning to the Thunderbirds, he was informed his spot had been filled due to his departure. These events meant his only tie to Los Angeles was the magazine. Based on these events Scott left Raw Power and took a job as a singer in a country-western band in Anchorage, Alaska. The Pacesetters were a well-known local band that had been together for a decade performing five nights a week in Alaska’s largest nightclub, The Pines Club. During his three years in Anchorage Scott completed his college at Alaska Pacific University receiving a Bachelor of Arts degree in Communications and a minor in Fine and Performing Arts. He married (and later divorced) a former Miss Alaska Teen winner and Salutatorian of the school. It was while amidst the natural beauty of Alaska that Scott joined the Sierra Club and started on the path of environmentalism. To reduce his carbon footprint, he purchased a condo across the street from his place of work and gave up driving for a couple of years, relying on his skates and bicycle to get around the city. As an advocate of roller skating for transportation, Scott entered an Anchorage marathon but wore skates instead of running shoes. Without any training he easily finished ahead of all the contestants who were running, proving the viability of skating (He was not the official winner of course, as skates were not allowed). The oil-based Alaskan economy crashed in 1985, and The Pines Club had to lower salaries of their musicians. Scott rushed to sell his condo before the market tanked and drove his van on the Alcan highway all the way from Anchorage to Oceanside, California.

After much prodding from his family, who thought his singing career wouldn’t achieve any substantial results, Scott entered the insurance and financial industry. In 1985 he started a career with Allstate Insurance that lasted 25 years. He founded Encinitas Insurance Agency in 1988 and along the way earned several professional designations including CLU, ChFC, CIC, and LUTCF. His agency achieved the coveted National Conference honor 12 times. He sold the agency in 2012.

Despite great success in the financial industry, Scott’s passion was music. He began work on establishing Liquid Blue in 1994, laying the foundation for what would become a renowned events band. In the early years, Scott financed the expenses of his advocation with funds from his insurance agency. In the late 1990’s Liquid Blue was nothing more than a typical local cover band.

In 2005 the band released their debut album, “Supernova” and it was named “Pop Album of the Year” at the Los Angeles Music Awards. Scott wrote or co-wrote all the songs on the LP. By 2007 Liquid Blue had become the world’s most traveled band. This achievement was driven by Scott combining his passion for music and travel. The band played almost every possible international circuit before establishing their reputation as a world-class events band. Scott’s now deceased father, who was ironically an aspiring singer himself, lived long enough to witness the band in one of their crowning moments, at the opening concert for the 2008 Beijing Summer Olympics.

Scott’s now deceased father, who was ironically an aspiring singer himself, lived long enough to witness the band in one of their crowning moments, at the opening concert for the 2008 Beijing Summer Olympics.

In 2010, Scott co-wrote the song Earth Passport which reached #3 on the Billboard Dance charts. The band also received a Guinness World Record later in the year. In 2011 Scott’s goal of making Liquid Blue one of the world’s most recognized cover bands was realized when the band was named “Entertainer of the Year” at the Spotlight Awards in Las Vegas. Today, nearly a quarter-century since its formation, the renowned group is better than ever and still on the lookout for the next plateau along the journey.

Scott is one of a small but growing number of self-employed business owners who travel the world while working on their laptops. He spends at least half of each year on the road and splits the remaining months between his homes in San Diego CA and the Asia. His primary focus is managing and marketing the operations of Liquid Blue and writing. He still performs a limited number of shows with Acoustic Blue (aka Two From Blue) and makes rare appearances with Liquid Blue if and when he finds himself in the same city as the band.

A self-proclaimed “working hippie” and world-citizen, Scott has traveled to 122 countries (many of them multiple times), all 50 U.S. states and all seven continents. Of the more than 600 cities he has visited, Amsterdam and Paris are his favorites. He has reached the pinnacle of success with three separate businesses as well as attaining great heights as a performer in two different fields of entertainment. His unique life experiences have provided a distinctive perspective on national and world affairs.

Great, so let’s dig a little deeper into the story – has it been an easy path overall and if not, what were the challenges you’ve had to overcome?
There are no smooth roads in life. Every road has hills, twists, turns, and hazards. I have persevered and overcame many adversities. There were so many bumps in the road I wouldn’t know where to start.

Please tell us about Liquid Blue.
Liquid Blue has achieved the status as an elite event cover band in a class of not more than 10 other similar acts worldwide. We perform at first-class events nationally and internationally, most recently performing at the Tatler Balls in both Hong Kong and Singapore.

We are the only cover band to lay claim to a Top 10 Billboard hit and have released 16 albums to date.

Liquid Blue is recognized as the world’s most traveled band and has a Guinness World Record.

Do you look back particularly fondly on any memories from childhood?
Taking family vacations to San Diego.

Listening to the Padres and Chargers radio broadcasts. I could often get these games in L.A. I tend to root for underdogs ad the Chargers and Padres of the 1970’s were the “dogs” of the underdogs. LOL

Watching the LA T-Birds on KTLA. 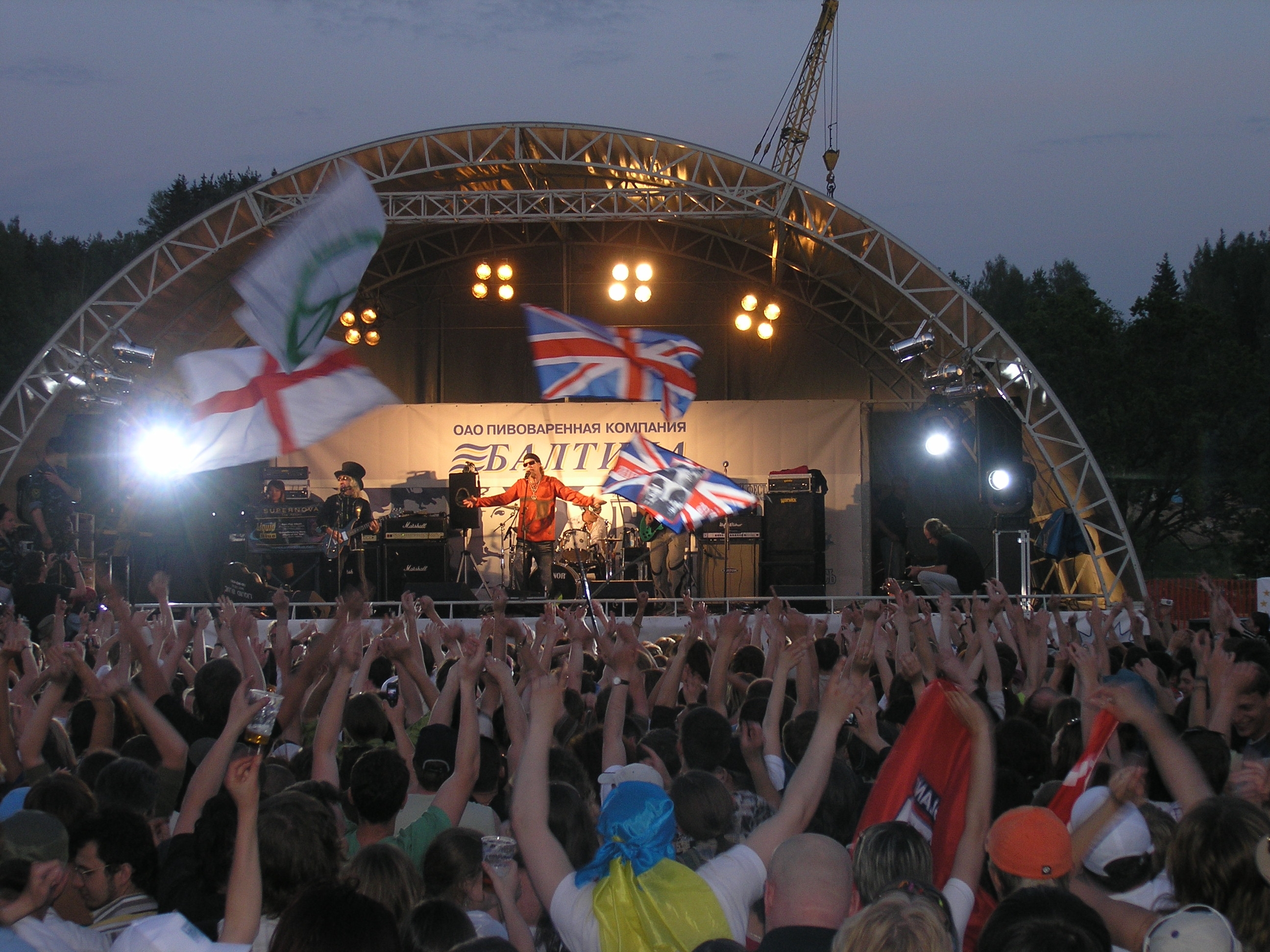 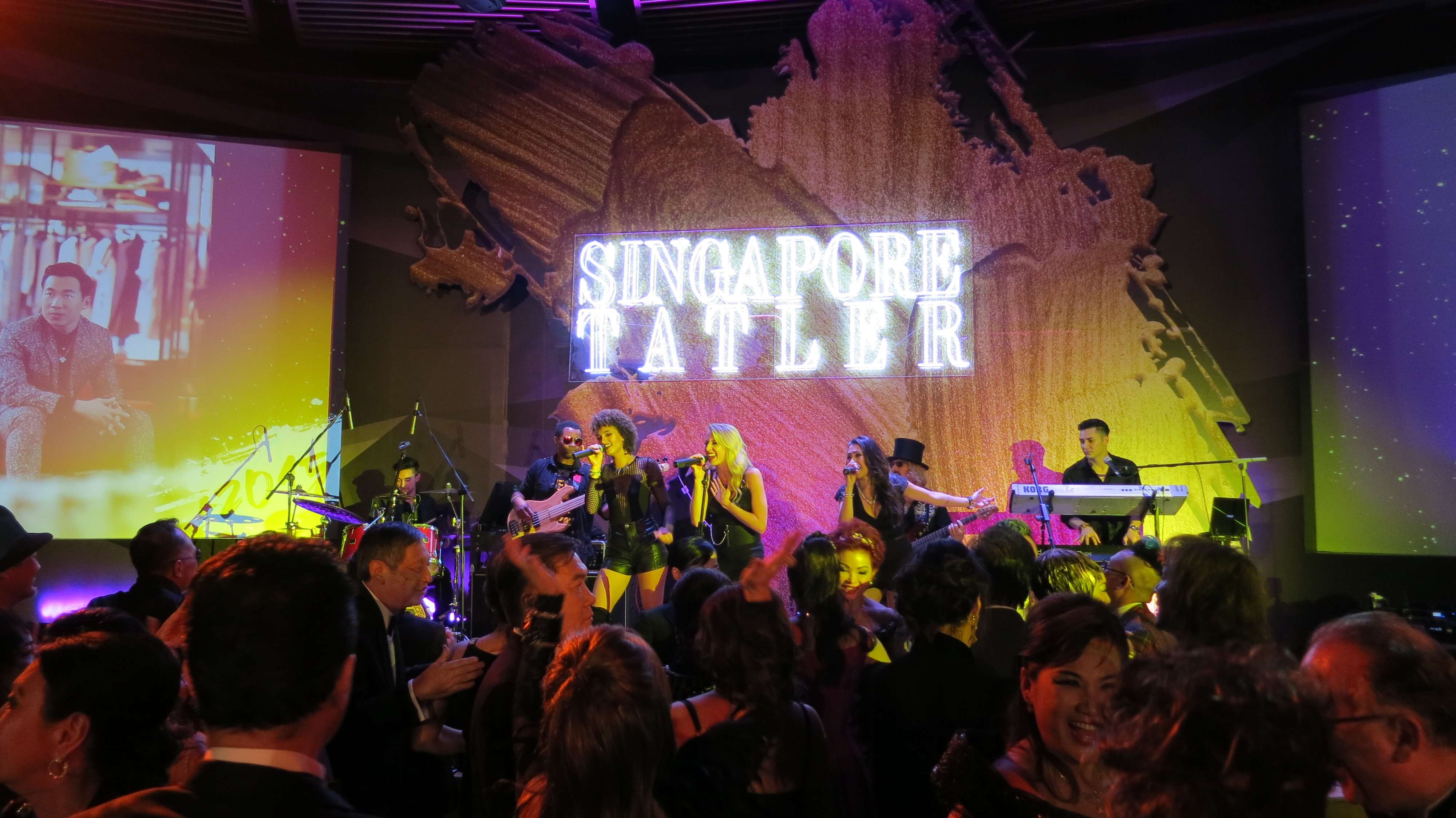 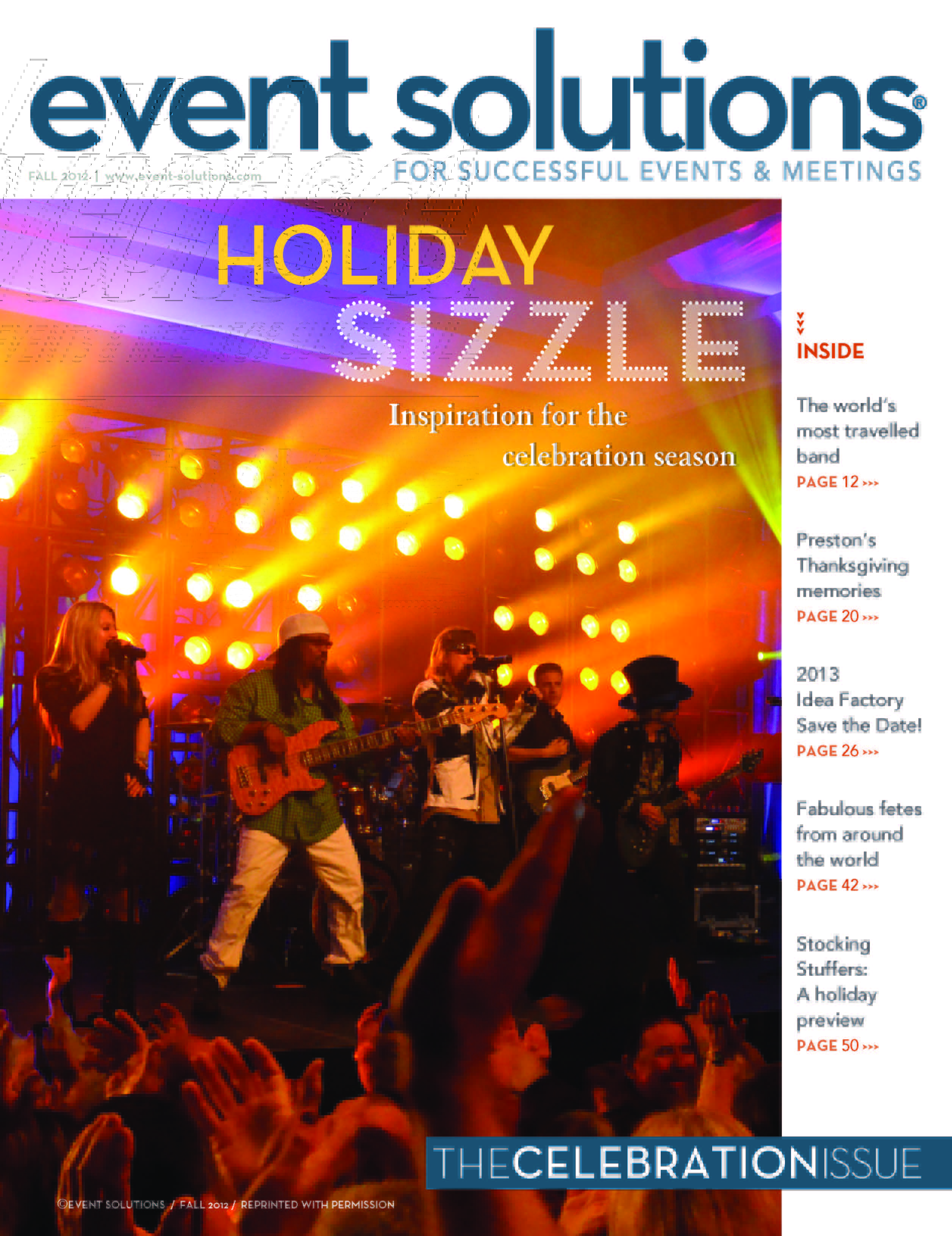 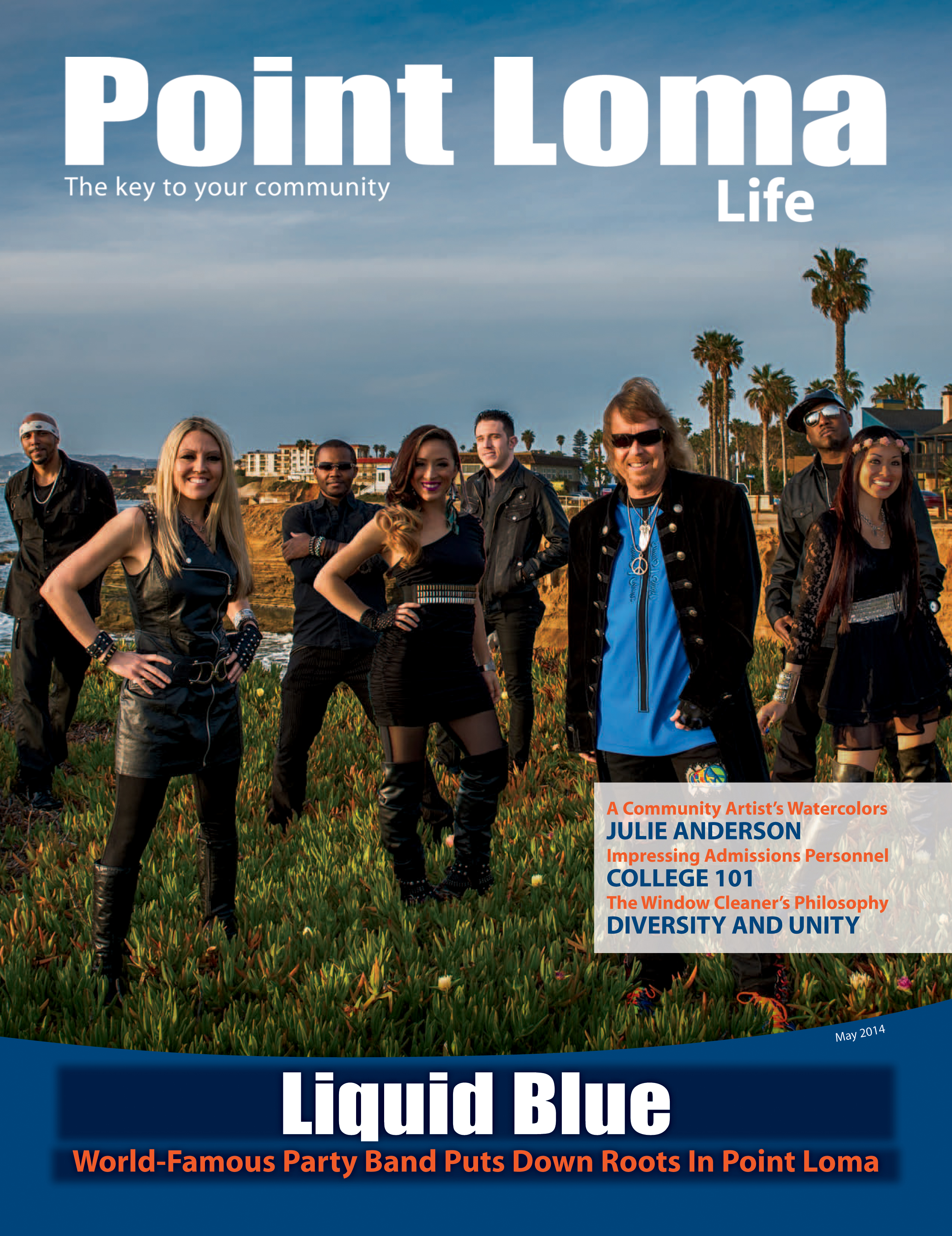 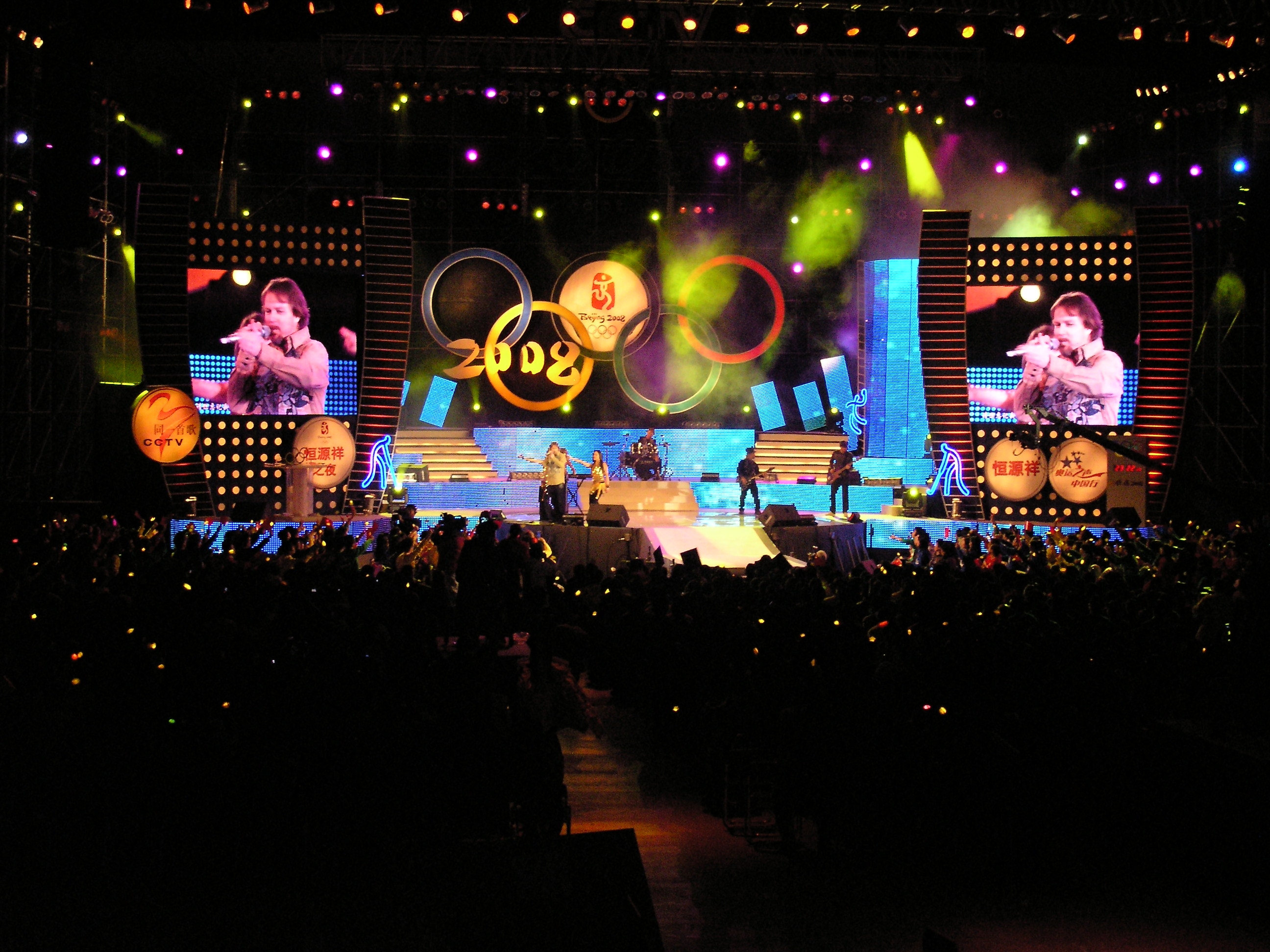 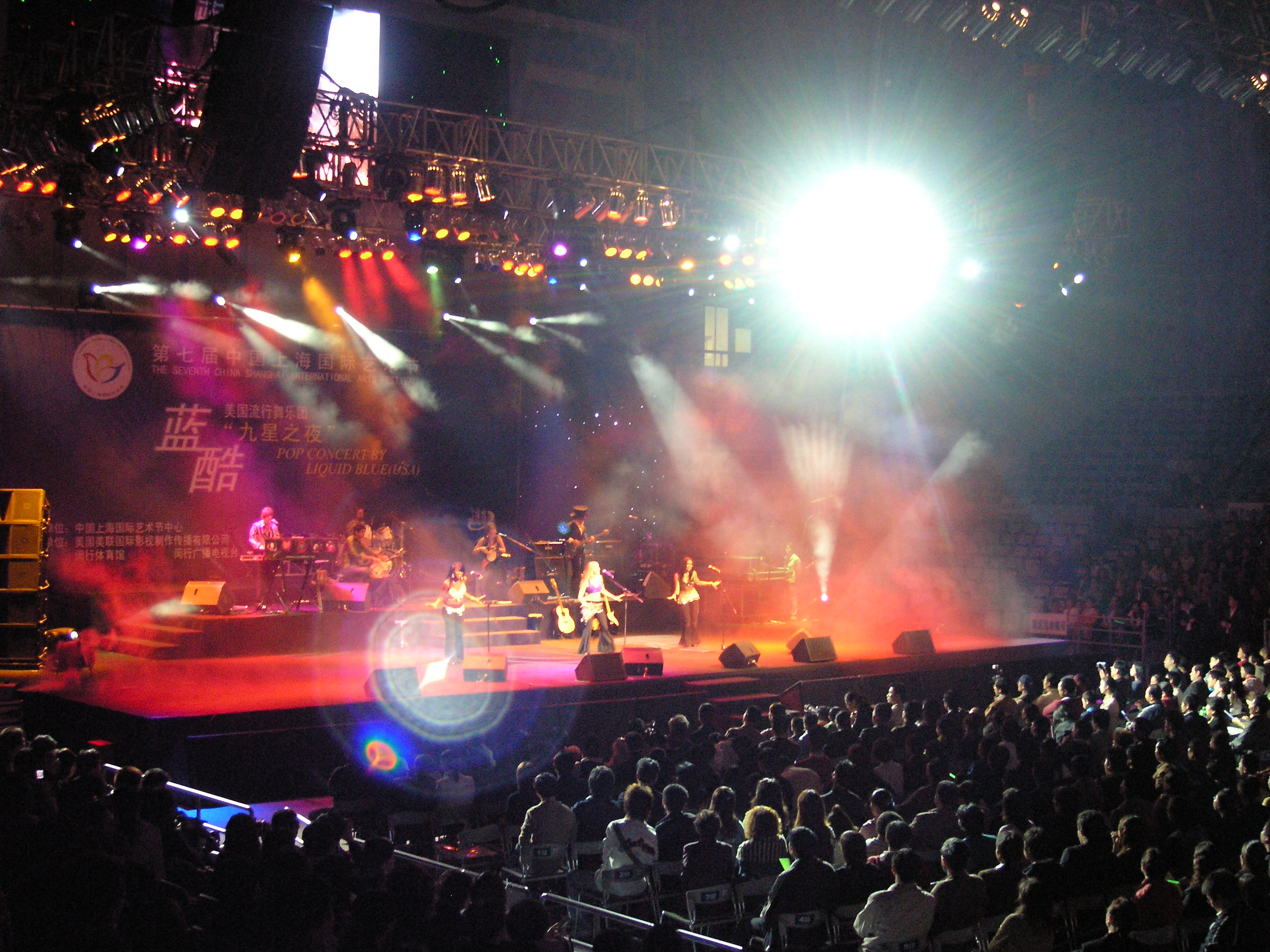 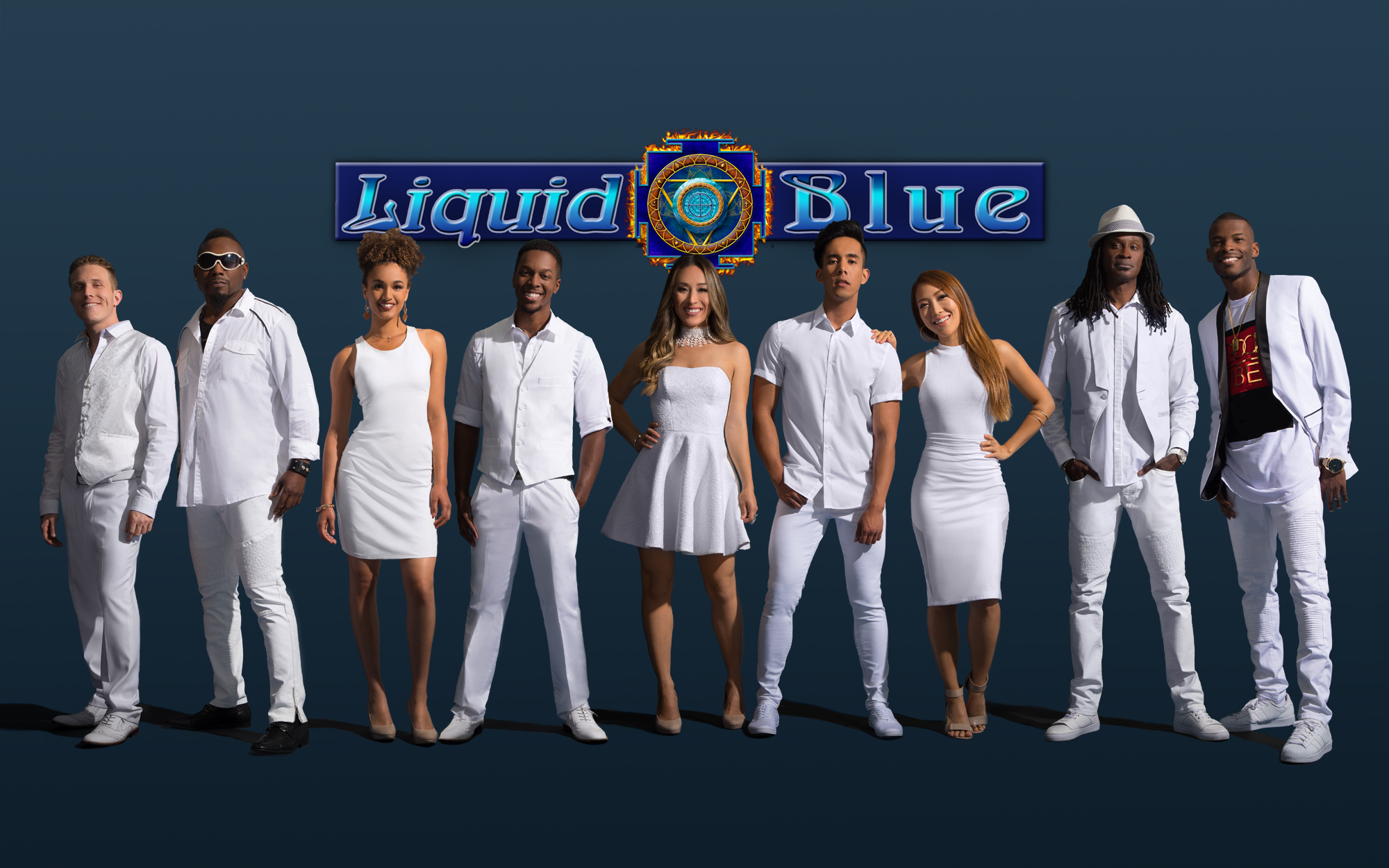 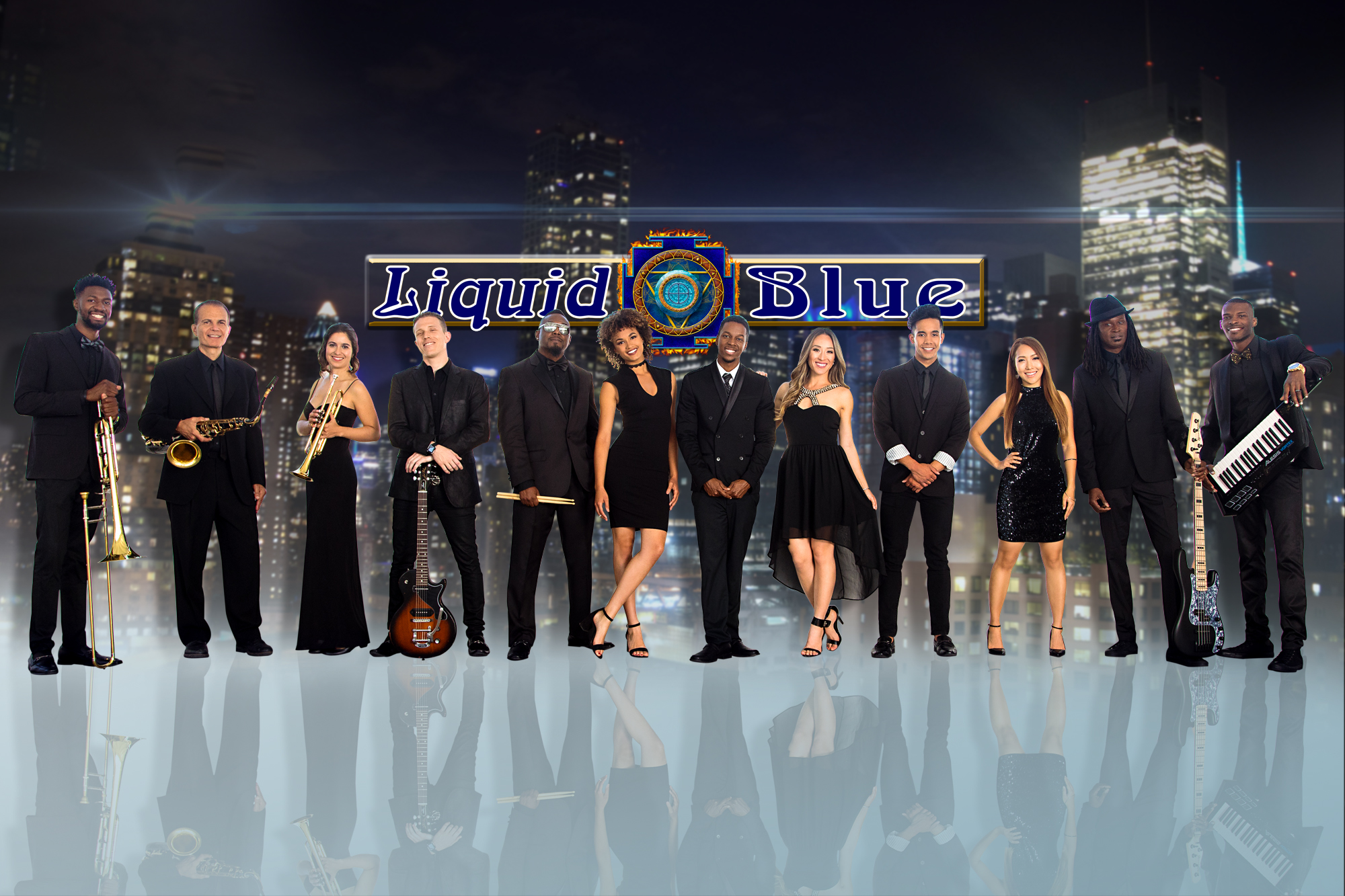