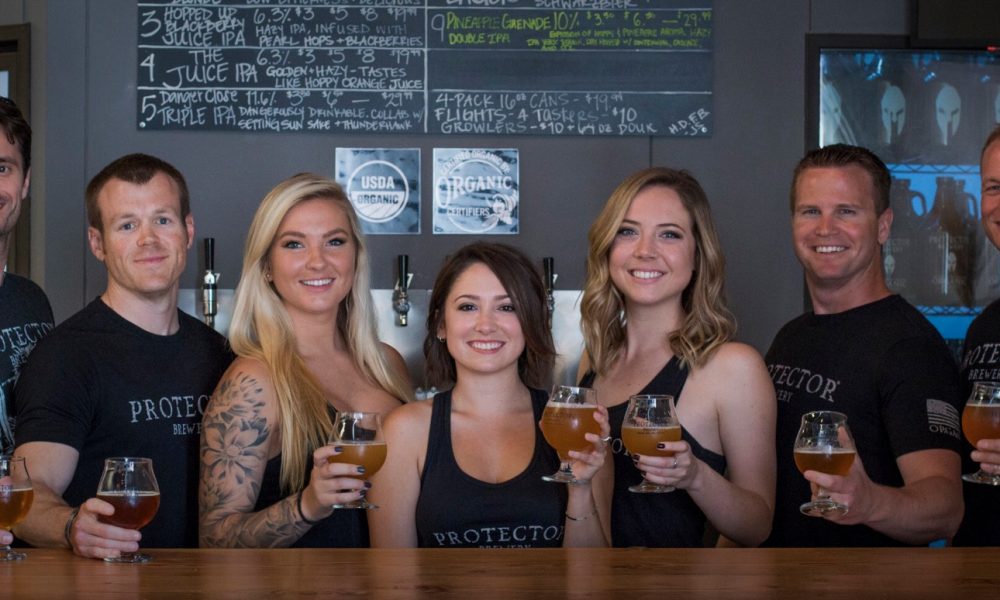 Today we’d like to introduce you to Sean Haggerty.

Thanks for sharing your story with us Sean. So, let’s start at the beginning and we can move on from there.
The idea to start a brewery came to me in the summer of 2010 when I needed a beer… while on a deployment to Iraq. I was serving as a U.S. Navy SEAL and halfway through my 3rd deployment to Iraq, I just needed a beer. Suddenly, I had the urge to brew my first batch right there in the Middle East. I called friends back in the U.S. and had them ship brewing ingredients over and I brewed my first batch with any equipment I could find on base. Though my first batch wasn’t the best beer I brewed, I decided that summer I would eventually transition out of the military and open a brewery in San Diego, CA. As time progressed, I formulated a business plan and began to brainstorm what the San Diego beer scene was lacking. My wife (Cory Haggerty) and I discussed the potential for an all organic brewery because we believe in sustainability, but also because there were no local organic craft beer options in Southern California. After years of scouting organic farms and formulating the best team to push Protector Brewery into reality, we decided to sign a lease for a brewery in Miramar, CA. Then, on June 2nd, 2017, we opened Protector Brewery, San Diego’s 1st and Only Organic Beer Co. Since then, we have brewed over 30 styles of beer on our 4 U.S. Barrel (BBL) system and have begun narrowing down a couple “flagship” beers to continuously brew.

Overall, has it been relatively smooth? If not, what were some of the struggles along the way?
Bootstrapping any startup company is very difficult, but bootstrapping a startup brewery is extremely difficult. We have a small operation relative to many breweries in San Diego. We have a 2,300 sq. ft. manufacturing facility with a tasting room. Essentially, we had to start two businesses. On top of that, the alcohol industry requires a lot of regulation and special licenses. Above all, to certify our entire brewery as U.S.D.A. organic was the toughest part. However, that has been the most rewarding part because everything that goes into our certified organic beer is natural, non-GMO, and nothing is synthetic. I have learned many lessons as a Navy SEAL, but working through struggles and never giving up allowed us to create an all organic craft brewery in San Diego, despite the odds.

Protector Brewery – what should we know? What do you guys do best? What sets you apart from the competition?
We are most proud to only brew USDA certified organic beer. However, our company and our brand stand for an alliteration that is our mantra. People, Planet, Progression, Protector. Above all, we support the local community of San Diego. Specifically, we support the military, veterans, police, firefighters, & all those of service to our great country.

What is “success” or “successful” for you?
To me, success is daily fulfillment through positive impact. My goal each day is to move towards a better tomorrow. The reason why we have such a bold brand at Protector and will only brew organic beer is that we are on a mission to show people the power of choice. There is a massive and positive impact on the environment when you choose organic. For example, every ingredient we use is grown or sourced organically, which means there were no chemical/synthetic pesticides used. According to the EPA, in the U.S. over 1 billion pounds of chemical pesticides are poured into the environment through conventional farming. Thousands of birds each year die because they are exposed to these chemical pesticides, just to name one negative side effect. There are many more negative effects from conventional farming. However, when you choose organic, you make a small positive impact on the world because more and more farmers will switch to organic farming. Success to me is defined by the choices we make each day towards a better future in any capacity.