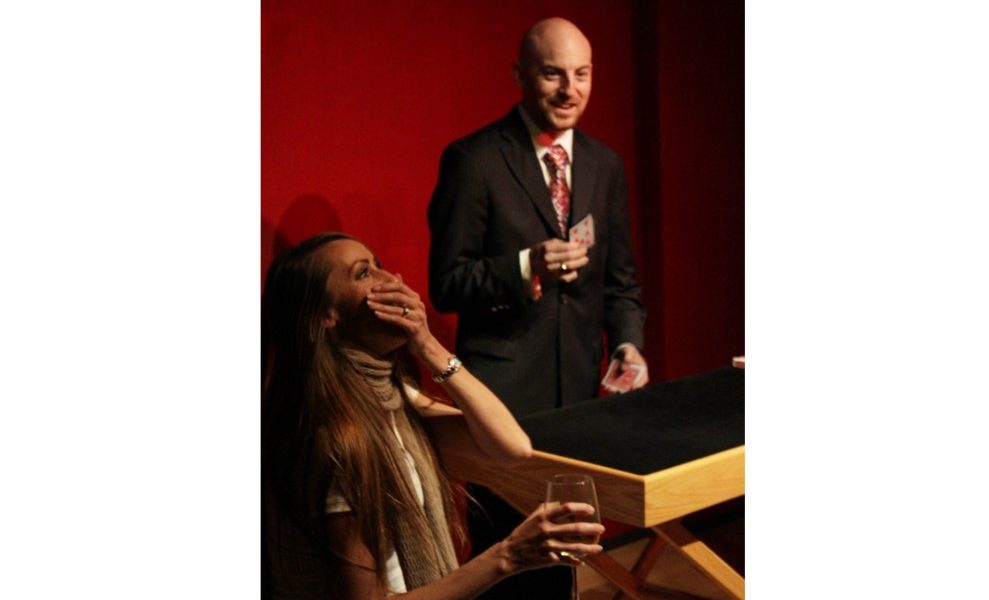 Sebastian, please share your story with us. How did you get to where you are today?
It all started with a monthly performance that I did at the wine bar that was located next door. One night after my performance I walked out and noticed a For Rent sign in the window. I peaked in and thought to myself I could probably set up a small theater in this space and do my show on a weekly basis instead of once a month. I had just finished a corporate event out in Boston and had half the money I needed to get all the equipment I needed to open the theater. I looked for an investor but I didn’t have any takers. I asked my father if he would front the other half of the money I needed to open up and get going. He indeed gave me the other half of the money I needed. So I was in business.

I had to come up with a name for the theater and at the time was having a difficult time coming up with a name that would convey that this was intended to be an elegant night of magic similar to the experience you would get going to the Magic Castle in LA. Not a hokey kid’s magic show but an elegant night of sophisticated magic. I had a black hat that had a red spade embroidered on it sitting on a shelf and I happen to glance at it and thought to myself Red Spade Theater and it clicked. My father helped with the design of the logo and I have been showcasing my magic at the Red Spade Theater for a little over 6 years now.

I have been able to get to where I am by offering a great experience that you can’t see anywhere else in San Diego and by following my moto that Failure is not an option.

Great, so let’s dig a little deeper into the story – has it been an easy path overall and if not, what were the challenges you’ve had to overcome?
The road has been bumpy but luckily I have navigated through the struggles with a good off road vehicle. 🙂 My two most memorable obstacles were when we first opened it was the middle of summer and the theater was nice and cool (When the theater is empty). People started to come in and we started the show and all of a sudden the theater got to an unbearable temperature very quickly. We tried opening the door putting fans in front of the door but it wasn’t good enough to cool the place down with all the people and having the lights on. So we installed an A/C unit. Now our biggest complaint is that it’s too cold.

The other memorable obstacle/challenge was one night we over booked the theater by a lot of tickets. We had a miscommunication with some of the ticket vendors and they over sold their allotment for that date. The theater only seats 28 people and we had about 50 people show up. The line was all the way out to the street. I had to act quickly and make a split decision on the spot and I offered the people who could not come in tickets to the show the following week.

Please tell us about Red Spade Theater.
The Red Spade Theater is Southern California’s only theater dedicated to the magical arts. We specialize in formal close-up and parlor style magic shows. We are best known for our flagship show Intimate Miracles. What sets us apart from other venues or other magic shows is that the theater is very intimate consisting of only 28 seats so all the seats are good seats and we offer an experience that you can’t get anywhere else. It makes for a great and memorable date night.

Do you look back particularly fondly on any memories from childhood?
When I went to visit my uncle he would pull quarters out of my ear and I was absolutely mesmerized. Any time a magic show would come on TV I would watch it. I became fascinated with magic and started to learn some sleight of hand. My passion grew and I knew at a very young age that I wanted to become a magician and it all started with the production of a quarter behind my ear.