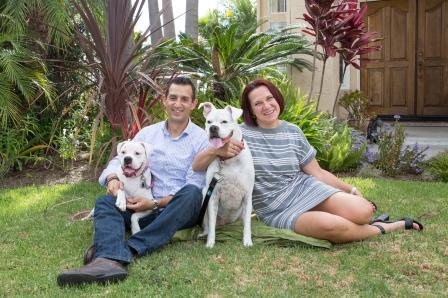 Today we’d like to introduce you to Juan Velasco and Anastasia Kabitskaya.

Their Story begins as any newlywed couple: being happy and living every day the very best they could. If you would have asked them back when they first met in Colorado in 2005; that they would be living the “California Dream as Entrepreneurs, they would have said “Only in Our Dreams”. However, as they say dreams do come true and there is no better than San Diego to live your dream.

However, it didn’t start out this way. Anastasia and Juan met in a small town Dillon, Colorado with a population of about 800 back in 2005. You can say when they first met it was Divine intervention or just pure 100% luck (really depends what you believe in). They believe it was a little bit of both.

Juan was about to be set up on a blind date by his friends. His friends had decided that Anastasia would be a great blind date for him and they could meet at a friend’s birthday party. He was working late that day and used that as an excuse to avoid the party and the inevitable fix-up. However, as luck would have it he was working that day across the street from the party; his friends saw him as he was leaving and convinced him to attend. Though he met Anastasia, there was no personal connection. His friends tried to push him, but it just wasn’t happening. As he was getting ready to leave, he was called back by the birthday girl. She had volunteered him to pick up her best friend who had no way to get to the party. So he grabbed a friend of his and they went to pick up the birthday girl’s best friend. The best friend was ALSO named Anastasia. This Anastasia though, was a different story. Juan felt an immediate connection and knew she was someone very special. They interacted only a little at the party, but Juan was again volunteered to take her home, and he gladly obliged. This was the beginning of a new chapter for both Juan and the *right* Anastasia. A couple of years later, they married on July 17th, 2006.

Juan’s first taste of entrepreneurship was back in Colorado where he owned a local service company. Anastasia later joined the business and they worked side by side growing it successfully. They both say that as most entrepreneurs, they tend to be pulled into an opportunity really not knowing what the journey might bring or what you’re getting yourself into. They didn’t know much about starting a business in the beginning but with hard work and determination they grew it successfully with over 30 employees and always focusing on providing a great service to their customers and having happy employees. They say that an important part of running a business is being well informed on what makes a business successful but also the majority of time is also trusting your instincts and following your gut.

They learned many lessons in business the hard way and always looked ahead focusing on the end goal and enjoying the journey along the way. Juan says that at times as an entrepreneur you begin a business with a personal goal in mind but you end up building something much bigger than you could first imagine. It’s a beautiful feeling to have a calling where you can have a positive impact on others and help them along their path.

After 5 years starting the business in Colorado, everything was going great. He said that it was finally operating by itself and that they could both step back and breathe. Then one day it all changed, there was a life changing event that happened in a blink of an eye that almost caused the destruction of the company and all that it contributed to the community and to its 35 employees. As small business owners they weren’t prepared mentally or financially for the challenges ahead. There were moments where it was easier to give it all up and at times it was like hitting the biggest wall and it felt like swimming in quicksand. Juan alongside with Anastasia created a plan and started to take small steps towards the end goal and overcoming doubts and fears every step of the way.

They worked together to overcome the obstacles the company faced and brought it back to life. They refused to take the easy road and let the company fall. After 2 years of hard work the company was rebuilt again. They decided to move on as they knew this was the end of the chapter for them in Colorado. The company is still successfully operating under new ownership today. He had made a promise to himself that he would use what he went through with his business to make a difference in other entrepreneurs and assist them in their journey.

They first discovered San Diego when visiting in 2005 when vacationing in Los Angeles and thought they had found paradise. They both knew that one day they would come back but didn’t know how or when. Fast forward to 2009 when they had decided to leave Colorado they packed up everything they owned in a U-haul and their two boxer dogs Cisco & Dina and headed west.

They arrived to San Diego without jobs and without knowing anyone in the area. It didn’t matter though, as they were in love with the community, the beaches and the friendly people. When they first moved, they had no furniture or dishes, so they cooked on a tiny 10 inch grill and slept on an air mattress with their dogs. The dogs ended up on the bed and the Velasco’s ended up on the floor somehow. These were hard times but also the best of times as they had all that they needed at the time.

After almost a year and their savings depleting quickly; Anastasia was able to find employment at a local bank and Juan was completing his Graduate Degree while looking for employment. He later found a great opportunity working with local Financial Firm. Both of them had always felt the calling for entrepreneurship in their hearts but never really focused on going into business again. As both of their corporate careers grew, they both knew that they had to make a decision soon. To either continue the path of the corporate world which seemed already paved for them (like the yellow brick road) or jump back to the unknown sea of entrepreneurship. Making the decision was harder than they thought. After making the decision they both had to reface many fears that were resurfacing from the past they experienced in Colorado. But they later realized they could use what they learned from their past experience and apply it in their new business ventures.

In the beginning, there were a few small ventures & ideas that didn’t succeed. They began to feel that entrepreneurship was not for them at this time. After much thought and working on their personal growth and development they decided to take a leap of faith once.

They continued forward with a strong belief that entrepreneurship is driven by your mindset, vision and hard work.

He focused on his initial promise to himself to help entrepreneurs. In 2014, he started Zumah Consulting that provides business coaching to small businesses, assisting them with developing business strategies and reaching their full potential.

In 2016, they opened Slight Edge Hair Salon in Oceanside. It was a bit of a jump, as they never worked in the salon industry before. But their business knowledge and great instincts have made the salon into a workplace with a wonderful working atmosphere that provides a great service to their clients. They saw it as an opportunity to contribute to the community and to turn around a struggling business. They consider the stylists as family, and help them with their career path by providing them business coaching. They have successfully grown the business and the best part they say is to see their stylists grow in their careers and reach their full potential. They strive to keep the culture as pleasant and happy as possible in the salon, and their motto is “Come in for a style and leave with a smile!”

Has it been a smooth road?
The road has not been smooth but any road worth traveling will have some bumps along the way.

We have learned that it really is your outlook and perception of challenges that you face. With what we experienced with our first business and almost losing everything, we realized that life is really an adventure and we are only limited by our own mindset and we have the potential of doing anything.

Thomas Edison said “Our greatest weakness lies in giving up. The most certain way to succeed is always to try just one more time”. It is amazing to know that Thomas Edison took over 10,000 tries to finally invent the light bulb, now that’s perseverance. Lucky for us he didn’t give up or I would be writing this under candle light.

Slight Edge Hair Salon, we actually purchased it as an existing business under a different name and later discovered that the condition of the business was in worse shape than we had anticipated. We had to make a decision to either keep it the way it was or to make a change in the business. We decided to change the business and rebrand it. We also had to change the business model in order for the business to succeed long term. This meant starting all over again with a new name and new staff. It was a risk in losing all the previous clients and starting from the bottom up again. Again, we trusted our instincts and on our vision. We quickly had to learn the industry but we also had some mentors that graciously provided their knowledge and expertise to us. We completely reinvented the salon and have successful grown it. We are truly blessed to have a team of talented stylists and grateful for our clients that have supported and trusted us.

We’d love to hear more about your business.
We are a local hair salon located in North County San Diego in Oceanside. The business name was actually inspired by one of the first books we read for entrepreneurship “The Slight Edge” by Dave Olson. It is based on the ability to do small, easy, simple and sometimes boring tasks in order to reach your definition of success.

We are a full-service hair salon providing haircuts, hair color, skin care, eyelashes extensions and now we are certified by the health department to provide Microblading. We provide services to women, men, and children. We specialize in advanced hair color techniques, vivid colors, balayage and Brazilian Blowouts. We are known for our friendly, relaxed atmosphere and our talented stylists.

What sets us apart from others is our customer service; we understand that you can go to many places for a haircut or hair color and that is why we treat every guest as part of our family. Our number one goal is to make everyone feel like they are at home and not in the salon and having a great experience while getting their service. Our moto is “Come in for a style & leave with a smile”.

So, what’s next? Any big plans?
We plan to grow the business and continue to provide a great service to the community and to our clients. We don’t know what the future may bring but we are always looking ahead in how we can grow and contribute to the community. We will continue focusing on assisting other entrepreneurs along their journey as we had others assist us along our path and we will pay it forward as well.