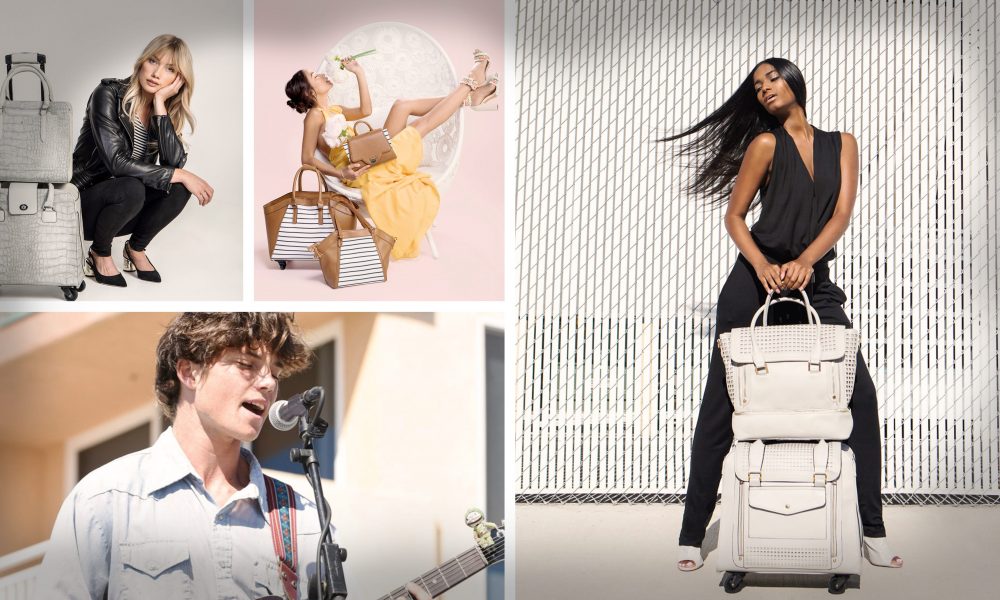 The heart of our mission at the SD Voyager is to find the amazing souls that breathe life into our city. In the recent weeks, we’ve had the privilege to connect with some of the San Diego’s finest artists, creatives, entrepreneurs and rabble rousers and we can’t begin to express how impressed we are with our city’s incredibly deep talent pool. Check out inspiring stories from Pacific, Mission & Ocean Beach below. 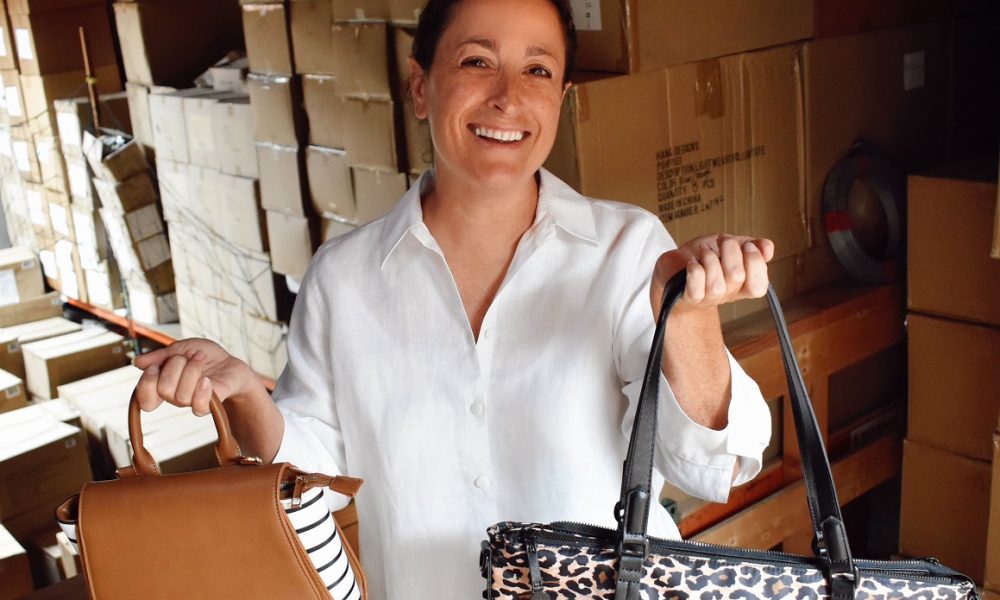 I’m a San Diego native who has always loved the diversity of the Southern California community, so it’s no surprise that my journey led me back here after attending UC Berkeley and a nearly decade-long career in advertising.While taking a sabbatical from my career, I traveled to Europe and became interested in the products that women were using while on the go. This inspired me to create Hang Accessories. My first product – an innovative reinvention of the purse hanger – was a huge success that kept our business growing throughout the recession. The idea of combining style with functionality was the conception point of Hang Accessories and remains the foundation of everything we do. After many business trips (and vacation trips too), I felt that travel bags and accessories did not speak to the female consumer. The bags that were available were either functional but too masculine, or stylish but lacking the features and functionality that women need when traveling for work or fun. Read more>> 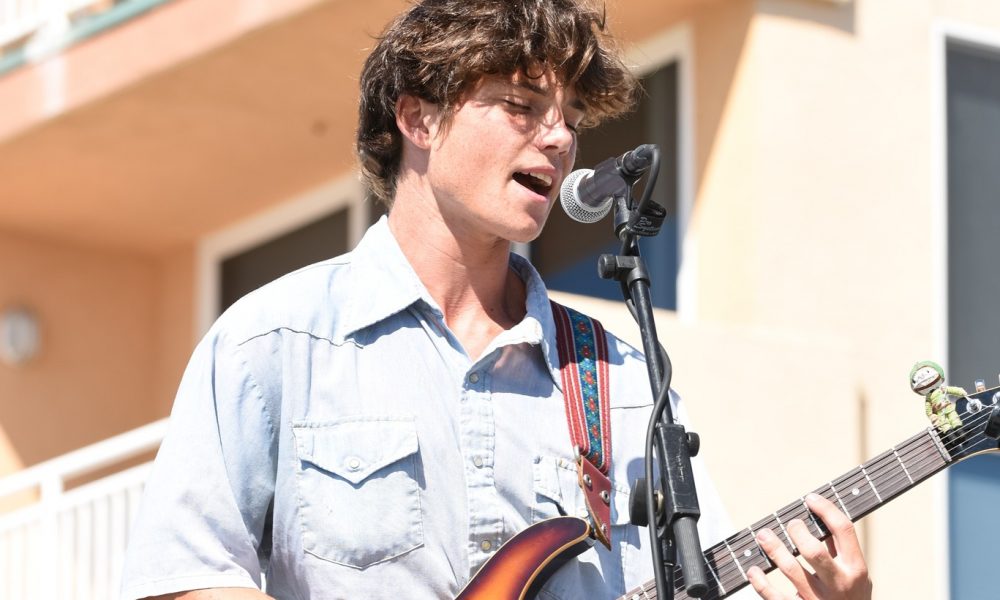 I guess I started out with an itch for music growing up around my dad playing blues piano, among other styles but primarily blues songs. The radio was always turned up in the car, and I was always asked by my dad on who the artist playing was. Additionally, I’d hear a lot of music around the house that my dad would play. Included a lot of dad rock, though I can’t remember exactly which artists. Lotta 80s stuff and 90s rock. My dad noticed my liking for music and got me a guitar for my 8th birthday along with lessons. I enjoyed learning but not so much, guitar was pretty secondary to me at the time. I would also enjoy learning some songs on the piano by ear. For a talent show at my elementary school my dad got together some other local kids and we played the show a couple times before going into middle school, whereby that point the band was more established and had the name Dr. Jekyll & Mr. Frostie (based off of Pacific Beach’s renowned ice cream stand). Read more>>

I’ve loved making art ever since I was a kid. Somehow though it has always been an elusive endeavor for me. I wanted to pursue art in school, but was steered away from it. I guess it was considered a less practical pursuit than other areas of study by the teachers where I grew up, in Long Island, New York. I went to college in New York City at New York University and studied Communications with a Studio Art minor. I think at that time I still didn’t have the courage to claim art as a career or even a passion, but it was always there under the surface. I went to Florence, Italy for a semester and for the first time really felt like I was home. I started to find my artistic voice, but still not my artistic courage. After that trip, I didn’t draw or paint again for ten years. A psychic once told me I was creatively blocked and that made me mad, and made me cry. Read more>> 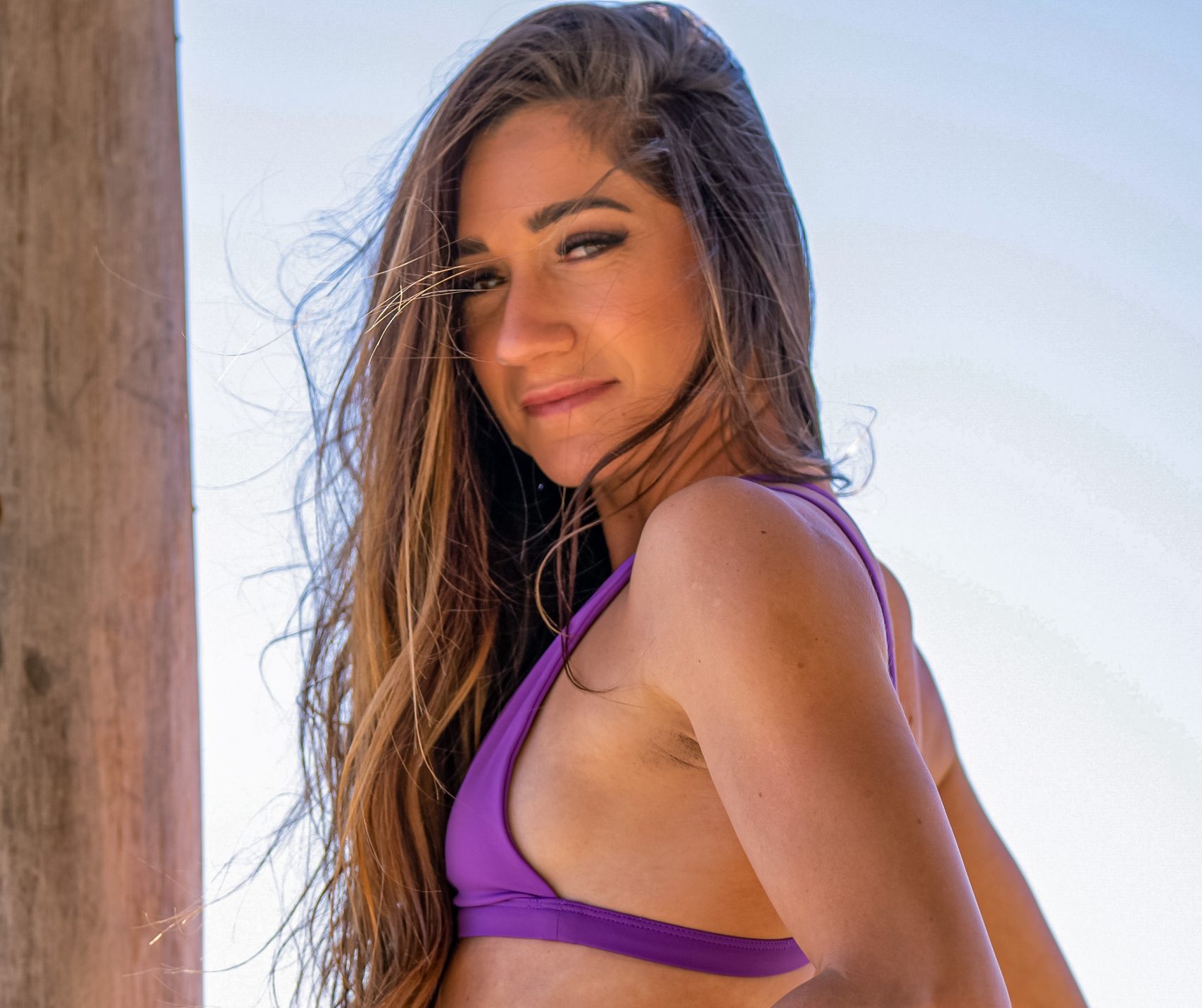 I started RYS Life a little over a year ago in September 2020. As a little girl, I have always love the outdoors, from hiking and snowboarding in Tahoe to hiking the beautiful trails in Yosemite. As I got older I realized all the damage our society is causing our mother Earth and I wanted to make a difference. I started doing research on how wasteful fast fashion is and I thought this is the way I can help, sustainable fashion. I can create a company that has classic styles that is good for our Earth, I found a fabric company that makes fabric out of trash that is pulled from the ocean and repurpose it. Since there is so much trash and waste we might as well reuse what we can. I decided to start with bikinis, as that is what I love to wear. My ultimate goal is to develop RYS Life into a fully sustainable lifestyle brand, After a few months in business, we got the amazing opportunity to be a part of the largest swim show in the USA, Miami Swim Week 2021, This was an incredible experience, where we got to debut our sustainable swim line. Read more> 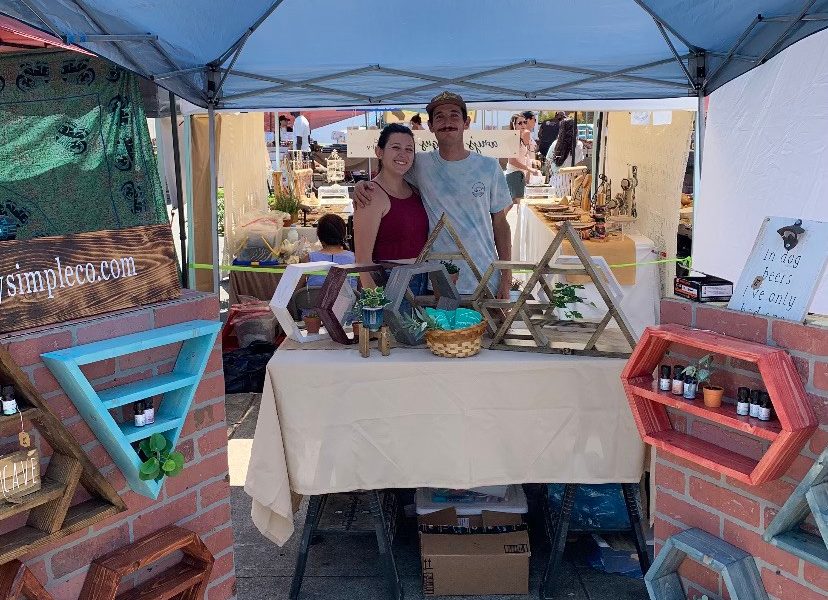 One day, Christian and I were walking through Michael’s craft store when we saw a Cricut machine. Intrigued and full of time, we decided to buy it. We were amazed by the number of things we could create with this machine, and our creativity took off. We started making signs, designing t-shirts, and even making custom orders and gifts for family and friends. We began doing the OB Farmer’s market on Wednesday nights, where we wheeled down all of our supplies in a wagon. We loved meeting our customers and seeing how much they loved our work. When we moved in together, we realized our need for shelving in our tiny home. That was when we moved from signs and t-shirts to geometric shelving. A local shop, Petra de Luna, was the first to give us a shot to showcase our work. We didn’t have much space or resources, but we made do with what we had. Christian worked full time, and I was going to nursing school, so it was a way to also supplement our income when we had the time. Read more> 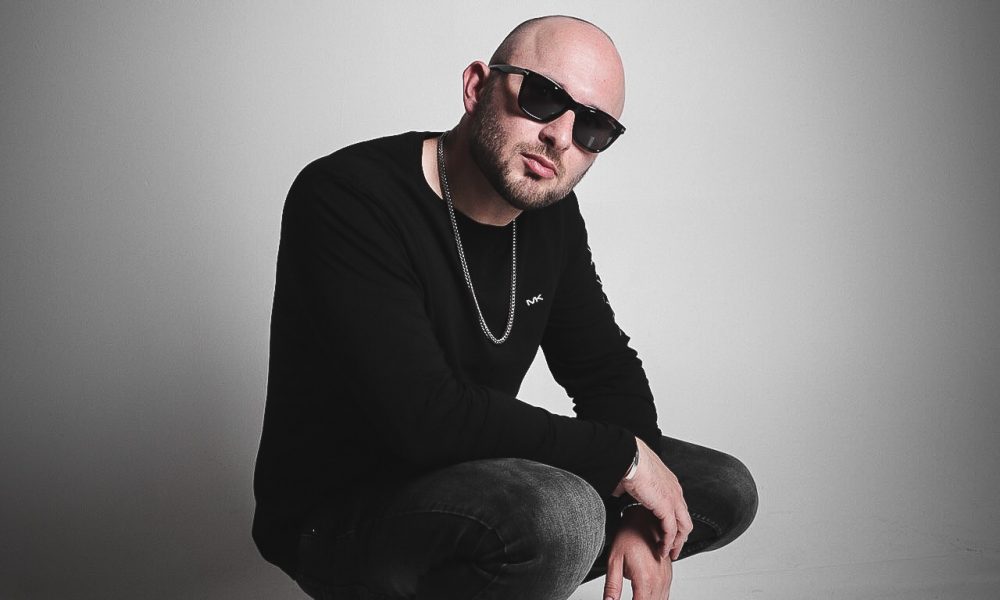 An 80s kid from Ukraine, I was a music fan before I became a DJ and music producer. Introduced to music by my parents, I fell in love with entertainment and playing my favorite music for people. At 15, I got my first turntables in Chicago, which led to my career as a DJ and later a producer. I began creating Trance music first and got support from various heavyweight DJs and producers like Ferry Corsten and Armin Van Buuren under my alias, Physical Law. Having lived in Chicago and embracing house music since the early age, I branched out to House and Techno, under my solo project Oleg Bondar, doing ghost production and running other projects like Arcade Room, Legend Mode and later BONDAR. Spending 1000s of hours in the studio, I was able to travel the world, play some of the biggest venues, share my music with millions of people and inspire others. Read more>> 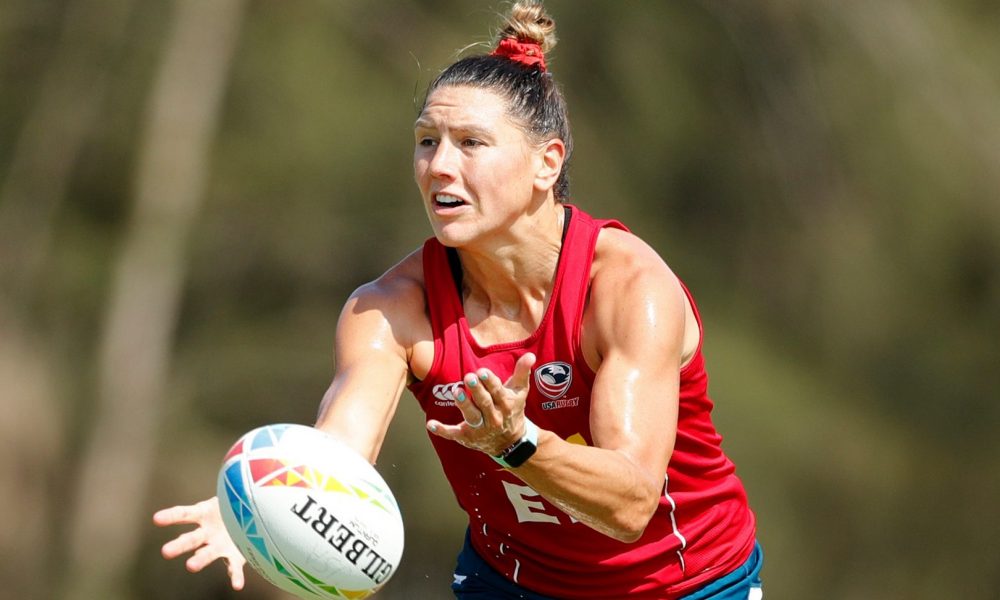 I grew up in the small town of Norrisville, MD- not even on the map. There is nothing there but large open fields, an elementary school and a fire department, which my whole family joined. I have two older brothers and we lived with our parents in Harford County, MD until I went to UMD. I was the first person to ever attend college in my immediate and extended family. I was a volunteer firefighter and Emergency MedicalTechnician from the age of 16 and this sparked my interest in medicine. I started playing club rugby at the University of Maryland in 2010 and eventually learned there was a national team in 2013, the year I graduated. I graduated with a BS in Physiology and Neurobiology in 2013. I stayed in MD and worked for different physicians in hopes of gaining experience for medical school. I still played club rugby and started to travel to gain more experience in sport as well. I decided to move out to San Diego on my own in 2015 to chase the Olympic Dream. Read more>> 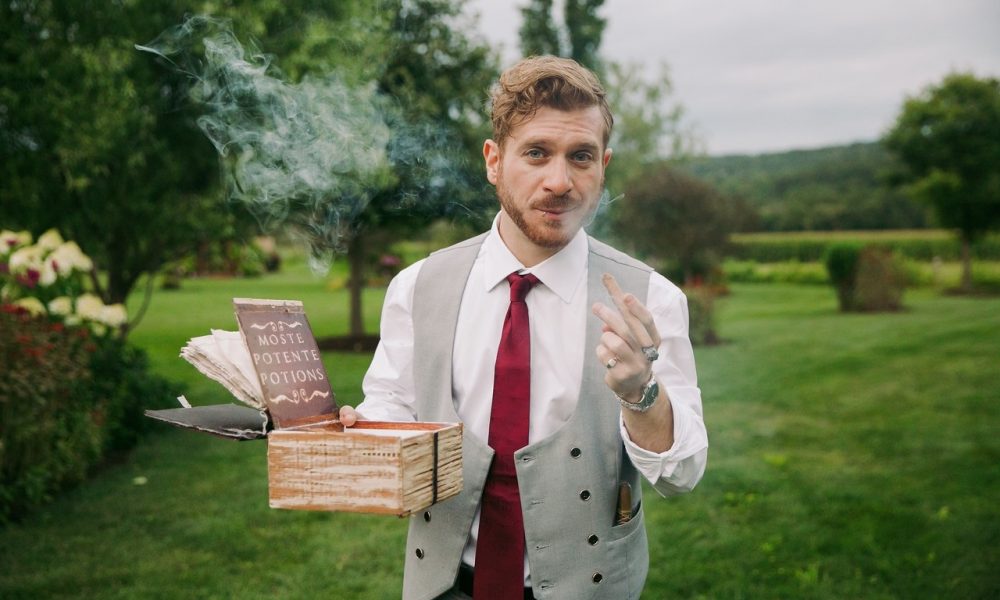 Growing up in Syracuse, NY, I had a long road of learning to play music myself, with not too much support at first, here’s a little background of how I got here today. In about 2003, I played bass guitar in a garage band. It was a great time, and I still love the bass. But one day, I sat behind the drum kit, and that was a wrap. It felt so normal and comfortable to me. I had one of my band members tell me, you should be playing the drums. With the support of my father and 2 uncle’s, at the age of 16 I got my 1st drum set. A Tama superstar. Once I had my own kit, it was off to the races. Playing in a couple garage bands here and there, I had an audition around 2007 for the band Lee Terrace. A progressive jam band whose members are still my best friends today. We had some success in the upstate New York area. In 2008, 2009 I auditioned and joined a second band Phantom Chemistry. An indy, electronic band with members I still call my friends. We had a great combination of music styles and also had success in the upstate NY area as well as nominated for several SAMMY music awards. Read more>>