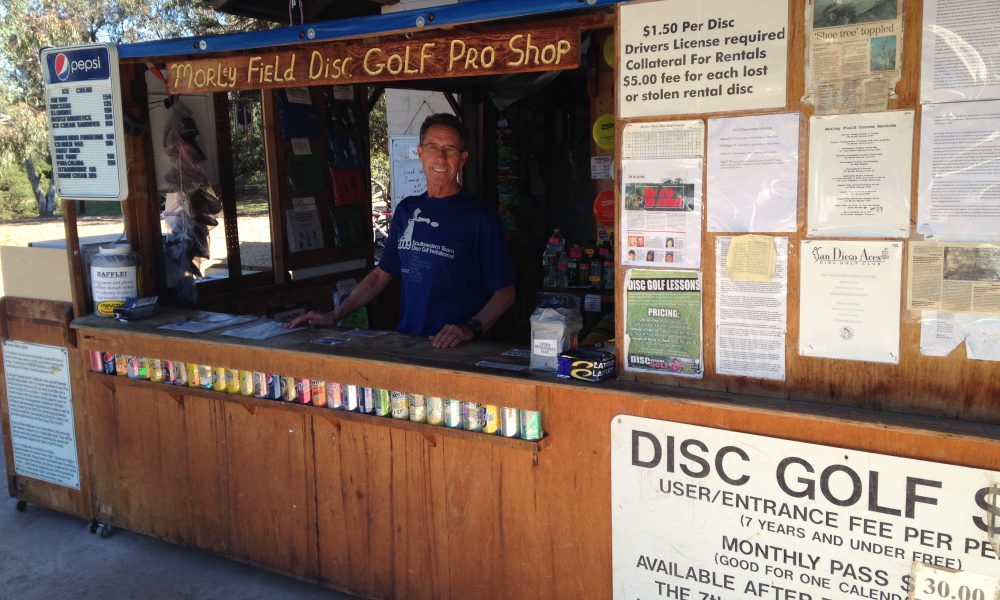 Today we’d like to introduce you to Snapper Pierson.

Snapper, let’s start with your story. We’d love to hear how you got started and how the journey has been so far.
The city of San Diego was sold the original disc golf course in 1977 by Ed Headrich of the Disc Golf Association. Ed was a former Whamo Executive and had invented and patented the term Disc Golf. In the early days Ed sold the courses to city on a matching funds basis. The city would come up with $2500 and Whamo would match that amount hoping to sell more Frisbees and Ed would get $5,000 for his course and design. It was such a success the first year the city decided to put a new restroom in the middle of the course. The restroom contractor required the city to remove the baskets during the building of the restroom. It was a yearlong process and upon completion the city didn’t put the baskets back in the ground. I was tired of hitting poles we’d put into the basket’s sleeves and took it upon myself to seek out and put all the baskets back into the ground and locked down. It was during this period that I was declared course pro for San Diego by Ed. I started selling his Night Flyer Discs out of the back of my car at the course each day I came to play. In 1979 the city took notice of my activities and asked if I’d be willing to use the back of the restroom storage facility to house a small shop and sell food as well as discs and pay them a percentage of the profits. I agreed and have run my shop here ever since. Over the year’s we’ve moved from a concessionaire’s agreement to and actual land lease with all course maintenance responsibilities transferred to me and my staff. In 1994 we became a pay to play course so that we could have exclusive use of the property for disc golf play only. Today daily greens fees are $4 all day and $5 on weekends and holidays. We are the only for profit recreational activity in Morley Field and pay rents to the general fund of San Diego in excess of

$75,000 per year and contribute over $250,000 in grounds maintenance costs to maintain what we feel is the best maintained Disc Golf course in America.

We’re always bombarded by how great it is to pursue your passion, etc – but we’ve spoken with enough people to know that it’s not always easy. Overall, would you say things have been easy for you?
New fledgling businesses rarely have a smooth path. The course came with the caveat that it would never need any maintenance since the baskets and tee signs were galvanized steel. So the theory was put it in your forgotten and least used areas of the park. What better area than a former dump site with methane underneath preventing it from ever being developed. This area had been declared “unimproveable” by the Parks dept. and they turned over all development and growth and maintenance of the course to me as time went by. We’ve redesigned the course completely over time as disc technology has marched forward from the early days where 300′ was a tremendous throw to today where most players can throw 450′ and some as far as 700′ The discs have gone from floating “Frisbees” to heavy flying saucers. We’ve fought to get more parking, better irrigation, phone service, and more storage capacity for our mowers, carts and inventory. We’ve added hundreds of bushes and trees over the years.

We’ve removed hundreds of loads of rocks from our “unimprovable” ground to bring in top soil and grow grass.

We’ve added 122 pin positions and 32 clock irrigation systems for our 19 holes. We’ve put in benches, tee pads and safety netting where needed. We now employ 14 part or full time workers. Nine of which just work on the grounds maintenance daily. Clean and green is our motto. We know with our limited space we may never be considered the toughest or longest course but we strive to be cleanest and best maintained. You get a new course design every Monday with regular doubles tourney’s every week during Day Light Saving time and monthly all comers tourney each month. Over the years we’ve run yearly course championships, a yearly PDGA
“B” tier West Coast Am championship and since 1982 The Southwestern Team Disc Golf Invitational. This last tourney is a Rider Cup style event pitting the 12 best players from an area (i.e. Arizona, Oregon etc.) against each other in a match play format event. This tourney has evolved into the players favorite event of the year and has spawned copycat events all over the US.

So let’s switch gears a bit and go into the Morley Field Disc Golf Course story. Tell us more about the business.
We are a Disc Golf Course where you throw a golf disc down a fairway, circumvent tress and challenging elevation changes and then put it into a basket catching device. Count up your score and continue on thru the 19-hole course. We use the same etiquette and terminology as our parent sport of regular golf or as we refer to it ball golf. We are a full service pro shop with over 70 varieties of discs, 15 different styles of bags, shirts, hats, food and drinks. We sell used discs as well as rent discs. We cater to groups of all sizes and levels of skill. We offer free playing tips, score cards, lost and found that rewards the disc returner a $1 for their honesty, loaner leashes, bike locks, loaner brooms for the pads and many other amenities not available at other pro shops around the US. This sport has grown by leaps and bounds in recent years with over 6000 courses nationally and now played in over 60 countries around the world.

On any given weekend there are hundreds of tourneys played everywhere with different levels of skill being contested and player ratings established for the top Am and Pro 80,000 PDGA players who compete regularly on both a regional, and national level.

Has luck played a meaningful role in your life and business?
In the mid 80’s the structure of the city government was such that 5 deputy directors ran the city under the city manager. Each responsible for a different area. Our Deputy Director was a former Marine general in the reserve. He was a micro-managing tyrant who hated any non-traditional sports. He did his best to drive us out of the park. To that end he disallowed our traditional parking near our Melaluka grove on hole 17. He also disallowed any off street parking in our dirt parking lot adjacent to hole one. He had streets division paint the entire curb along Pershing Dr. red so we effectively had no parking for our facility other than the 10 car shared lot with the archery range. He also cut the funding for any and all services that the city was still required to provide at this time to our area. I spent those three years wondering if I could endure. But my contract was due up for renewal and I spent those three years renegotiating the terms shifting all maintenance responsibilities over to me plus a higher percentage going to the city but in return I had asked for exclusive use of the area for Disc Golf so we could put a charge on it and enough off street parking to accommodate at least 45 cars. I was willing to pay for the installation of posts and cable to outline our dirt lot next to hole one. I plead my case in front of the city council who agreed with my vision and allowed my contract to go thru and pay to play disc golf was born in San Diego. This was our aha moment for our course here in San Diego. I was very fortunate the city council favored my proposal over the deputy director’s insistence that the disc course be pulled.

Luck has been my best friend and hallmark over the years. I was fortunate enough to win the World Disc Golf Championship in 1979. The fifth year it was ever held. After the PDGA was formed in 1982 I was again fortunate enough to win the PDGA Masters Division (men over 35) in both 1987 and 1989. And finally I’ve won the PDGA Grandmaster Division in 2001. I have also been fortunate enough to win another 50+ world titles over the years in other Frisbee disciplines mostly in Frisbee’s Overall arena during the golden years (1978-2000) of big money overall contests. Overall consists of 7 events: Disc Golf, Double Disc Court, Discathon, Self-Caught flight, Distance, Accuracy and Freestyle. Originally sponsored by Budweiser, Bud lite and Wham with $50,000 events overall is

now just an amateur sideline event played by just a few hundred devotees. Also, I managed to be enshrined into the Disc Golf Hall of Fame in Appling, George in its second year of existence 1994. All this was only possible because I was able to compete during golden years of corporate sponsorship in Frisbee disc sports which allowed me to make enough money in winnings to justify the time spent training in the various disciplines.

I bring this up because it gave me great street cred with the locals who I’ve not always seen eye to eye with as I ‘ve had to apply rules for pace of play and for people who won’t follow the rules (play bands, drugs, dogs off leash etc.).

But I realized early on you can’t be loved by everyone but if you have their respect you can get their compliance which was necessary to make this whole pay to play plan work. Now there are hundreds of pay to play disc golf courses across America. 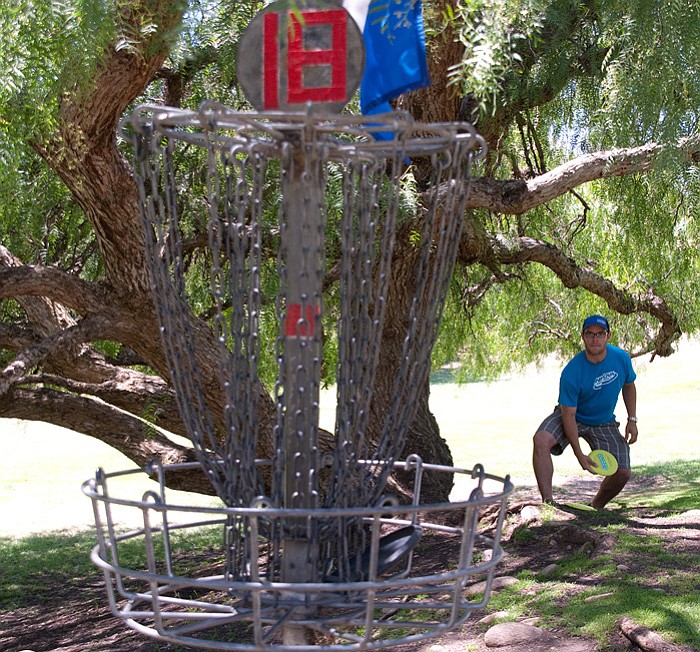 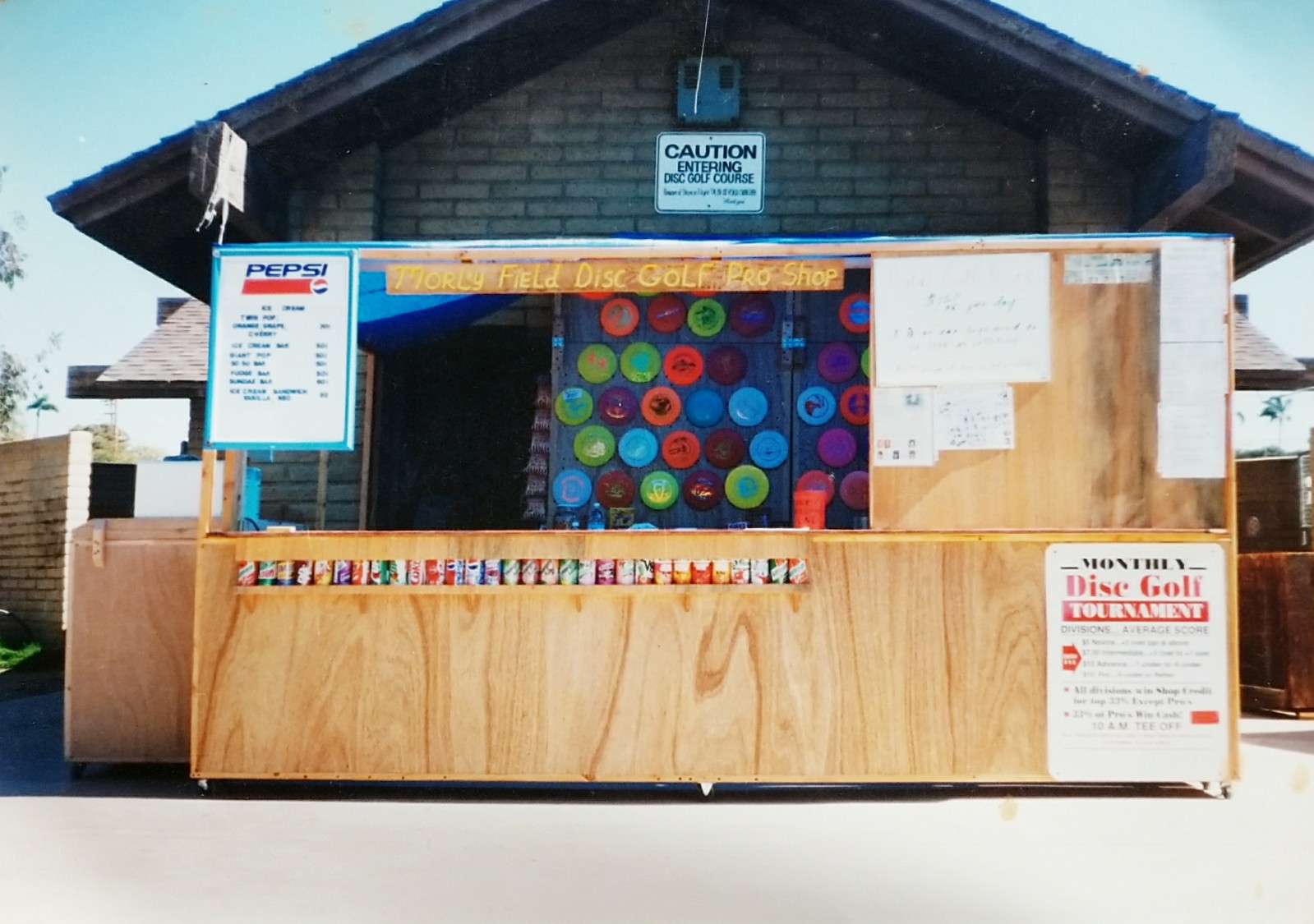 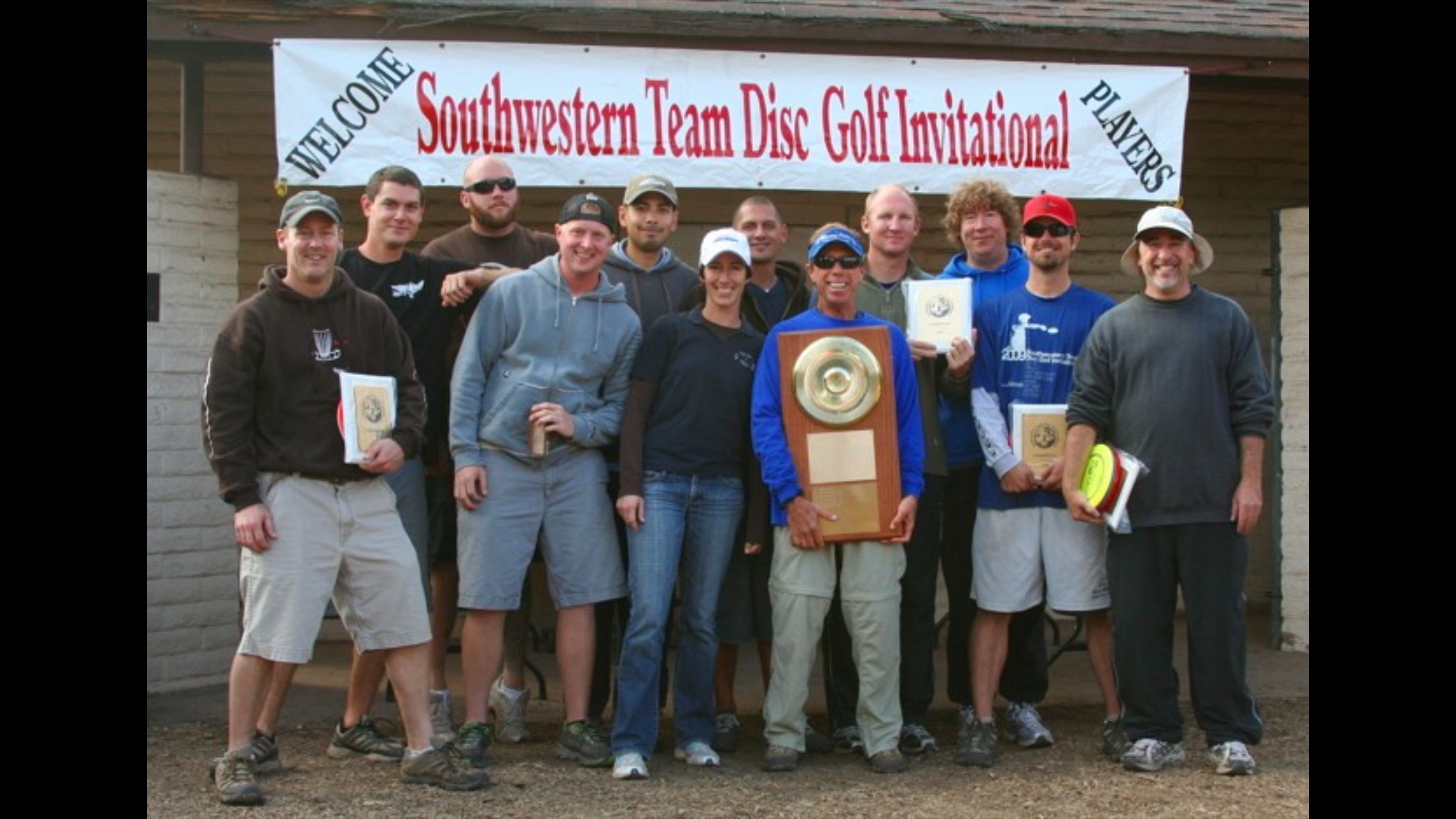 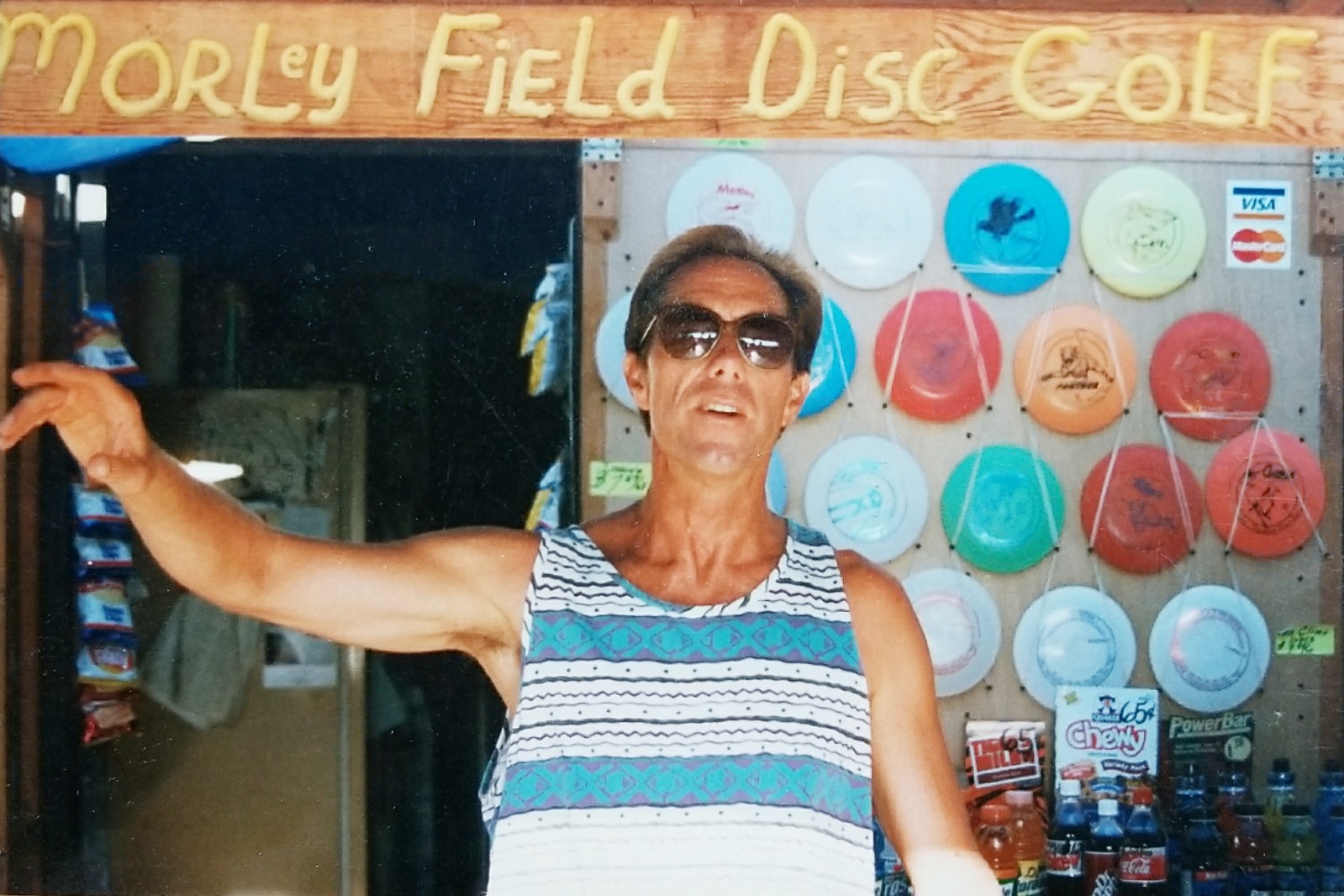 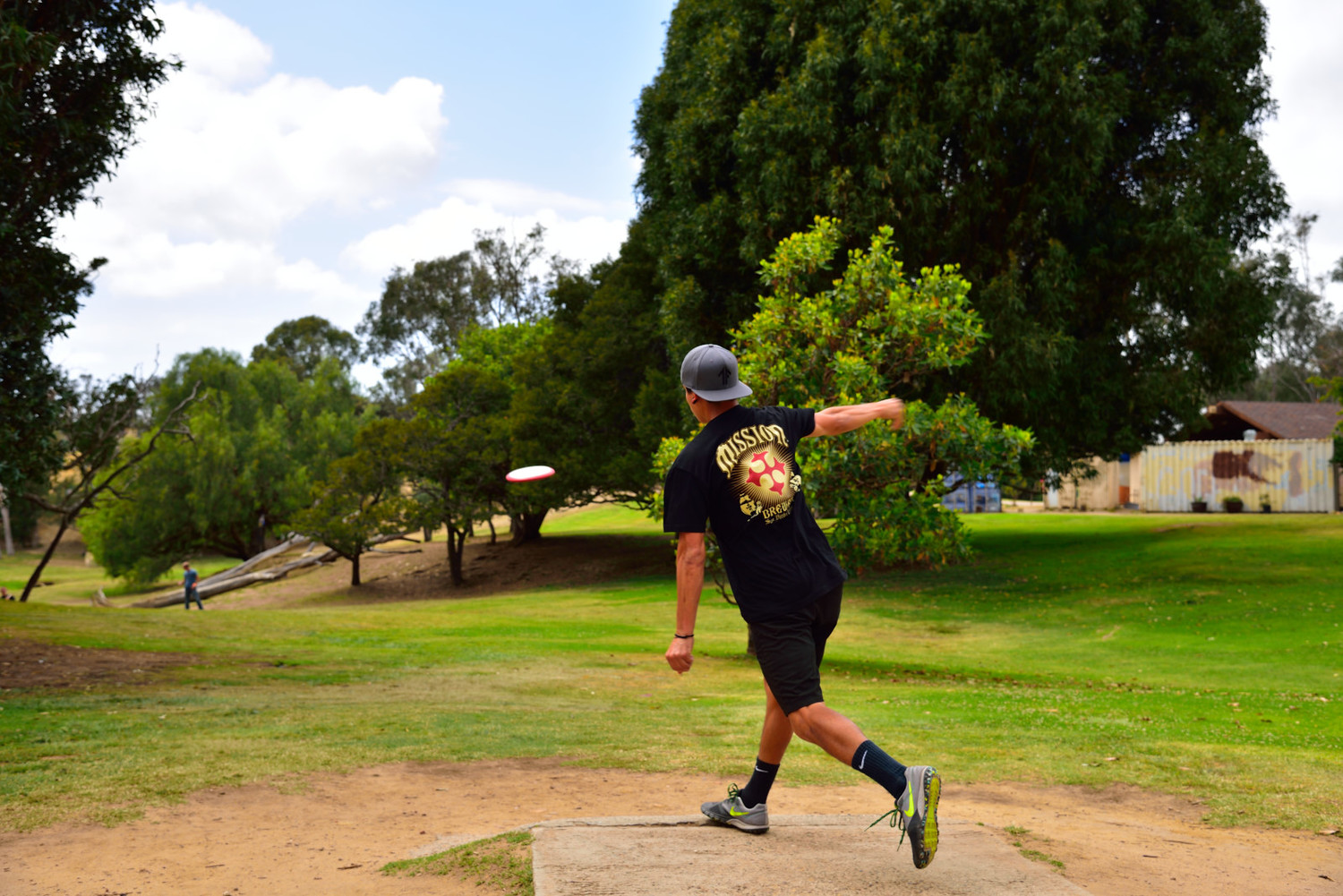